If you thought Corning's Gorilla Glass was strong, it can still lead to cracked displays, which means there's always room for someone to make improvements here and there. This is exactly what two students from Cambridge University have done. 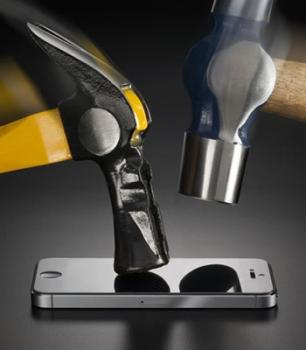 The students' product supposedly boosts the impact resistance of Gorilla Glass by up to five times, their product is called Rhino Shield, and is a new screen protector you install on top of your smartphone's display. Rhino Shield features a specific blend of patent-pending polymer, which gives your device more protection from shock, scratches and fingerprints.

There are countless other screen protectors on the market, but the developers assert that Rhino Shield is unique thanks to its impart dispersion and dampening layers that help diffuse blows against the device.

Rhino Shield is a little thicker than your standard screen protector, which is an average of between 0.015 to 0.020cm thick, measuring in at 0.028cm. This extra thickness would end being beneficial if its going to keep your device safer. The developers say that Rhino Shield is just three times thicker than a sheet of paper, and is highly transparent.

The developers, under Evolutive Labs, have pushed into Kickstarter for funding and at the time of writing had 294 backers with 4,693 pounds raised so far. Evolutive Labs need 50,000 pounds total to meet their goal, and they've said that they're ready to go into mass production if they need their funding. If the target is met, they would be shipping Rhino Shield in April.