Playing games on iOS and Android have been as common as checking your Facebook or Twitter as nearly everyone with a smartphone and some spare time have played at least one game on their device. For those who take their gaming a little more serious, on-screen controls aren't ideal, especially when it comes to first-person shooters like Gameloft's N.O.V.A. series. PowerA's MOGA will finally give gamers the control they want when they game on their mobile device, and best of all, it's available right now. 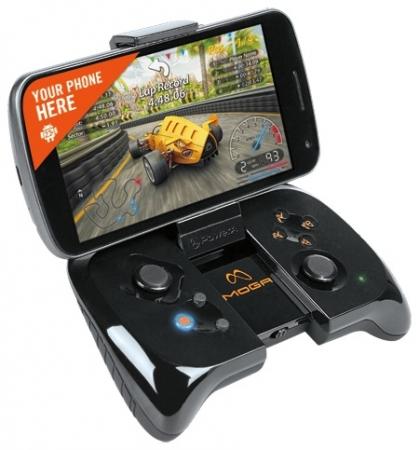 The MOGA Mobile Gaming System is compatible with only Android devices right now running Android 2.3 and above and will house your Android device of choice within the top bracket, which may be a familiar angle for you Nintendo DS & 3DS owners.

The MOGA uses bluetooth to connect to your Android device, features dual-analog sticks, four face buttons, two shoulder buttons and a start and select button. It also already has some serious developer support as big-name game developers like Gameloft, SEGA, Atari and Namco Bandai have already updated games like N.O.V.A. 3, Sonic CD and Dungeon Hunter 3. The MOGA Pivot app will allow users of the controller to find games that have been optimized in one easy location.

Android users who want to try the MOGA out for themselves can do so at hands-on demo stations at select Toys "R" Us and Best Buy stores with both online and brick & mortar shops like Walmart, GameStop, Amazon and PowerA.com have the MOGA available for sale for $49.99.