At the end of the Fusion Developer Summit, Mark Papermaster, AMD Executive VP and CTO, produced some roadmaps which provided us a small glimpse into the future plans of AMD. AMD is looking to bring three new APUs to market in 2013 and 3 new server chips later this year. With the come new updated core architectures. 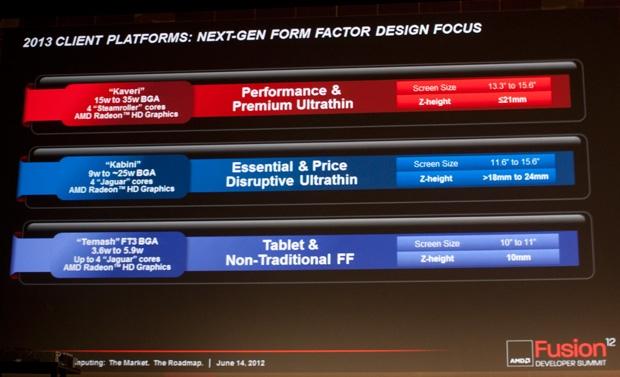 Let's start with the APUs. AMD is planning 3 different versions for various markets. The top APU is codenamed 'Kaveri' and will feature 4 Steamroller cores. Steamroller is the successor to the Bulldozer/Piledriver cores. This APU will feature fully shared memory with the GPU and have 15-35W thermal envelopes and be used in 13.3-15.6" notebooks with thicknesses of 0.83" or less.

The middle APU is codenamed 'Kabini' and will be the successor to the Zacate and Ontario APUs. The Kabini APU will sport Jaguar cores which are the next iteration of the Bobcat core architecture. Thermals will be in the 9-25W range and be used in 11.6-15.6" notebooks with thicknesses in the neighborhood of 0.71-0.94". The bottom APU, 'Temash,' will be similar and manage to fit into a thermal envelope of 3.6W. Wow.

On the server front, it's not quite such an upgrade. They will be releasing three new chips that will slot in the G34, C32, and AM3+ sockets and the only differences appear to be that they will have the upgraded Piledriver core that is currently present in the Trinity APUs. The codenames, for those curious, are Abu Dhabi, Seoul, and Delhi, respectively for the sockets listed above.