We've all seen those ads that focus on Apple's personal assistant Siri. But does it really perform that seamlessly? Well according to a lawsuit filed on Tuesday in the U.S. District Court in Los Angeles, it doesn't. This isn't the first time that someone has accused Apple of falsely advertising Siri either. 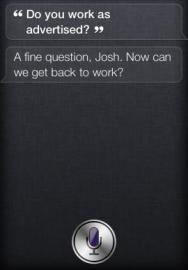 "Through its nationwide multimedia marketing campaign, Apple disseminates false and deceptive representations regarding the functionality of the Siri feature," Jones charges, according to the LA Times, which obtained a copy of the suit. "For example, in many of Apple's television commercials, consumers are shown using Siri to make appointments, find restaurants, and even to learn the guitar chords to classic rock songs. In its advertisements, Apple depicts these tasks as easily accomplished 'just by asking' Siri."

Often times, according to Jones, Siri misunderstood what he was asking or when Siri did understand what he was asking, she returned the wrong answer. In Apple's defense, they have publicly said that Siri is in beta and acknowledged that it is a work in progress. Whether or not this will help if the case gets to trial, only time will tell.