Earlier on today I did an unboxing video of the brand new and upcoming ASRock Z77 Extreme6 motherboard. This new board based on Intel's Z77 Express Ivy Bridge chipset is due out soon and comes with plenty of features packed in such as ASRock XFast 555 technology (XFast LAN, XFast USB, XFast RAM), Lucid VirtuMVP, Intel Smart Response, Intel Smart Connect and much more.

ASRock told us to say that this board supports 2nd and 3rd generation Intel Core processors and not "Ivy Bridge" processors, but at this stage of the game we're going to say Ivy Bridge, because we all know what we are talking about here.

ASRock's Z77 Extreme6 motherboard features a stylish and attractive gold and black color scheme which looks really great. The PCB is black and gold comes into the theme by way of the gold touches on the coolers as well as the Japanese golden caps. The board includes three PCI Express x16 slots for up to three-way SLI and CrossFireX support. ASRock does claim that the board can support Quad SLI, which it can, but only by way of using two dual-GPU video cards such as the GeForce GTX 590. 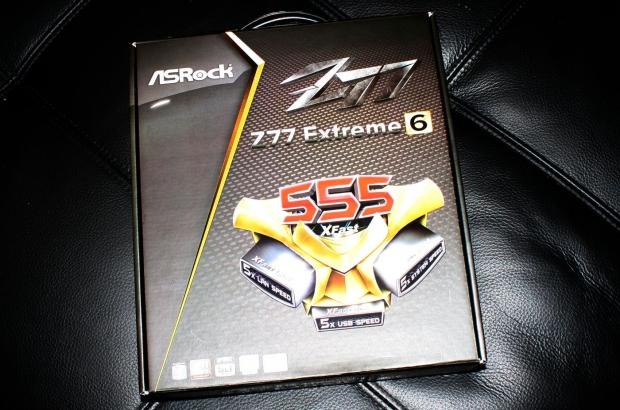 There are a total of four DDR3 DIMM slots which provides dual-channel memory performance all the way up to DDR3-2800 with the aid of overclocking, so you should be able to expect some good memory performance which is something ASRock has focused on for a while now. There also a mSATA connector squeezed inside between PCI Express x16 slots one and two along with a passive cooling solution, which looks like it should do a good job of keeping temperatures under control whilst overclocking.

But ASRock, why did you include an FDD floppy drive connector at the bottom of the board? We're sure there is a good reason, we'd just like to know why. When was the last time you used a floppy disk drive? Shane is going to put this board through its paces soon and you can expect our full review once the NDA expires a little later on in the future.