All NewsBusiness, Financial & LegalCases, Cooling & PSUContests & GiveawaysCPU, APU & ChipsetsDealsDisplays & ProjectorsGamingMotherboardsScience, Space & RoboticsStorageVideo CardsVirtual & Augmented Reality
All ReviewsAll ArticlesAudio, Sound & SpeakersCases, Cooling & PSUCPUs, Chipsets & SoCsComputer SystemsDisplays & ProjectorsGamingMotherboardsNetworkingPeripheralsStorageVideo Cards
GuidesGamingAsk the ExpertsNewsletterAboutForums
Chia Coin MiningRTX 3090RTX 3080RTX 3070HDMI 2.1Bitcoin MiningBattlefield 6
Audio, Sound & Speakers
Wireless headsets on the Xbox 360 seem to only be taking off now, like somehow companies are just seeing the Xbox 360 on the shelves and decide it's a gaming platform that deserves an expensive headset. Today is no different with Microsoft teaming up with Tritton (Mad Catz) to produce a series of cobranded headsets which have unrivalled integration with the Xbox 360, including such things like on-screen battery status and a 100-percent wireless headset with both game audio and chat. 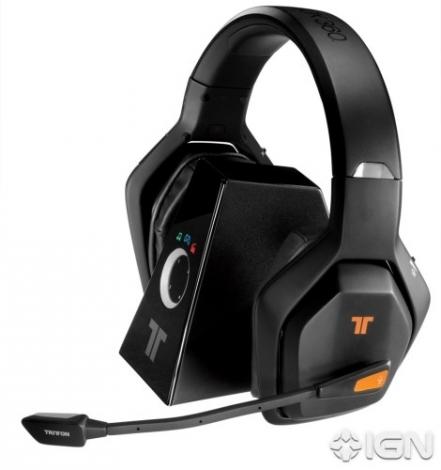 First up we have the Warhead 7.1 and Devastator taking up the premium wireless headset spots and the entry-level wired solution coming in the form of the Detonator. All three headsets feature 50mm drivers, but it's only the Warhead 7.1 that includes support for Dolby Digital, Dolby Pro Logic II and Dolby Headphones. Both the Devastator and the Detonator only support stereo audio.

The Warhead 7.1 and Devastaor both use 5.8GHz wireless tech, a specialized wireless base station that only uses two cables connected to the Xbox 360 (USB for power, and optical digital or stereo RCA for audio), finally we have the base stations supporting auxiliary input from iPods and smartphones.

This is where things start getting interesting; the bundled base stations that are included with the Warhead 7.1 and Devastator can feed audio to four headsets simultaneously. Both also include support for three different listening modes, gaming, movies or music. All three headsets feature active voice monitoring, which won't let you sit there shouting unnecessarily as well as removable boom microphones with easy-to-reach mute buttons and an LED light located at the end to indicate when the microphone is active.

Power wise, the Detonator is powered by wired USB, while the Devastator uses AA batteries and finally the Warhead 7.1 features a specialised rechargeable battery pack system. The wireless transmitter base station features an integrated battery charger which allows users to swap between two included battery packs in case of a long gaming session. Because the base station is powered by the Xbox 360, if you power down the console before charging is complete, it will continue to charge through standby power until charging is complete.

The Devastator and Warhead 7.1 have easily accessible volume, preset, power, voice monitoring and syncing controls built into the headsets, with the Detonator includes an inline cable controller. Price wise, it has yet to be determined, with the only hint at the moment is "none of the headsets will exceed $300".
NEWS SOURCE:au.gear.ign.com