All NewsBusiness, Financial & LegalCases, Cooling & PSUContests & GiveawaysCPU, APU & ChipsetsDealsDisplays & ProjectorsGamingMotherboardsScience, Space & RoboticsStorageVideo CardsVirtual & Augmented Reality
All ReviewsAll ArticlesAudio, Sound & SpeakersCases, Cooling & PSUCPUs, Chipsets & SoCsComputer SystemsDisplays & ProjectorsGamingMotherboardsNetworkingPeripheralsStorageVideo Cards
GuidesGamingAsk the ExpertsNewsletterAboutForums
RTX 4090Windows 11Halo InfiniteBattlefield 2042Elon MuskGTA 6RTX 3080HDMI 2.1
Software
Twitter has become pretty big business 140 characters at a time, and they are now looking to be close to releasing an Analytics product that would allow users to see a ton of information about their account that has previously been kept officially behind the scenes except by use of some third party apps. The photo below gives a little bit of what could be expected from the new release: 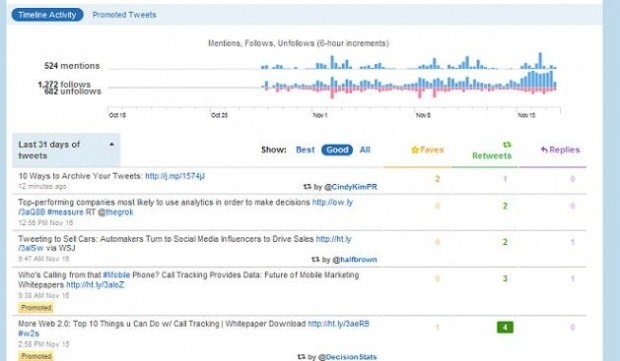 There are already a few third-party companies like Twittalyzer and Tweetstats that offer up trend info like how many retweets you get, success of tweets, and tweets that cause people to "unfollow" you, but Twitter releasing a solution in house would most likely take a pretty good chunk out of their userbase. According to Mashable, Twitter execs have started to invite a small group of users to test drive their new Analytics product and it could hit the mainstream by the end of the year.
NEWS SOURCE:mashable.com
Newsletter Subscription