All NewsBusiness, Financial & LegalCases, Cooling & PSUContests & GiveawaysCPU, APU & ChipsetsDealsDisplays & ProjectorsGamingMotherboardsScience, Space & RoboticsStorageVideo CardsVirtual & Augmented Reality
All ReviewsAll ArticlesAudio, Sound & SpeakersCases, Cooling & PSUCPUs, Chipsets & SoCsComputer SystemsDisplays & ProjectorsGamingMotherboardsNetworkingPeripheralsStorageVideo Cards
GuidesGamingAsk the ExpertsNewsletterAboutForums
Halo InfiniteBattlefield 2042Elon MuskGTA 6RTX 3080RTX 3070HDMI 2.1Bitcoin Mining
TRENDING NOW: Mark Cuban gets 'hit' by a crypto coin crashing down to zero dollars
Cases, Cooling & PSU
Huntkey has a new computer chassis that is aimed at the user who lives or works in a high radiation and interference environment that wants to shield their hardware from that radiation. The case looks cool in addition to blocking radiation interference from your gear and blocking interference from inside the case for getting out as well. The new chassis is called the Shield H405. 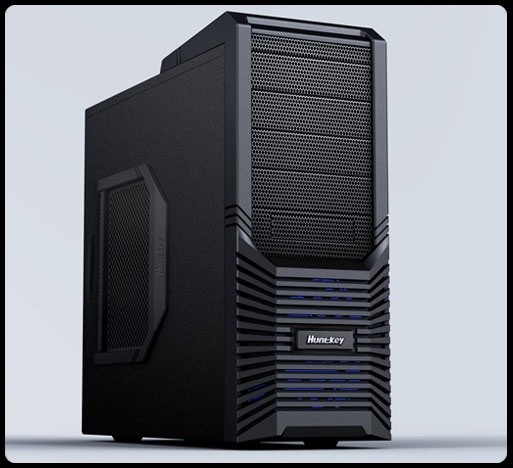 The case has a matte black finish and the company says that it came up with the case design by looking at heavy duty trucks. The case is designed to give the user a sense of power and defense capability according to Huntkey. I don't know about any feeling of power and defense, but it looks cool enough. It also has a mesh front panel and an integrated handle on top.

The main feature of the case is the radiation protection with a single sided baked on finish that helps block electromagnetic radiation. The USB 3.0 connector on top of the computer is wrapped in metal to reduce interference via radiation. The PCI slots in the rear are shielded to protect from radiation and the metal panel on front of the case to prevent radiation is also removable. The case has a 12cm fan inside the front panel for cooling and supports radiators for water cooling. The entire case needs no tools for construction.
NEWS SOURCE:huntkey.com