All NewsBusiness, Financial & LegalCases, Cooling & PSUContests & GiveawaysCPU, APU & ChipsetsDealsDisplays & ProjectorsGamingMotherboardsScience, Space & RoboticsStorageVideo CardsVirtual & Augmented Reality
All ReviewsAll ArticlesAudio, Sound & SpeakersCases, Cooling & PSUCPUs, Chipsets & SoCsComputer SystemsDisplays & ProjectorsGamingMotherboardsNetworkingPeripheralsRAMStorageVideo Cards
GuidesGamingAsk the ExpertsNewsletterAboutForums
RTX 3090 TiRTX 4090Diablo 2GTA 6Halo InfiniteElon MuskRTX 3080HDMI 2.1
Video Cards
The german folks over at Hardware-Infos have managed to get a good scoop on NVIDIA's next dethroning weapon to the GTX 480; a mild leap forward to make it worthy of its GTX 485 SKU. NVIDIA's own chief developer Bill Dally was apparently the source for Hardware-Info's news about the card's existence, who says it will see light of day this fall. 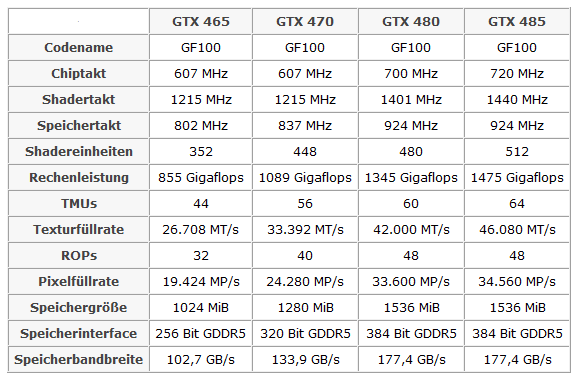 Running quickly over the specs provided, the card looks to get mild increases in all the right areas; 512 CUDA processors (vs. 480 on the GTX 480), a 20MHz higher GPU clock speed and 40MHz higher Shader clock. Whilst the ROPs remain at 48 vs the GTX 480, there are four more texture units aboard the 485.

Perhaps one of the most praised enhancements to the 485 will be the supposed superior reference cooler going on this model, said to be more efficient and quieter of which anyone who's heard a stock 480 under load will definitely appreciate any efforts made to improve in this area.

Specifics on launch date and pricing can't be provided this early on, but a whisper suggests it'll be a small bump higher than the launch price of the GTX 480.
NEWS SOURCE:hardware-infos.com
Newsletter Subscription