All NewsBusiness, Financial & LegalCases, Cooling & PSUContests & GiveawaysCPU, APU & ChipsetsDealsDisplays & ProjectorsGamingMotherboardsScience, Space & RoboticsStorageVideo CardsVirtual & Augmented Reality
All ReviewsAll ArticlesAudio, Sound & SpeakersCases, Cooling & PSUCPUs, Chipsets & SoCsComputer SystemsDisplays & ProjectorsGamingMotherboardsNetworkingPeripheralsStorageVideo Cards
GuidesGamingAsk the ExpertsNewsletterAboutForums
RTX 4090Windows 11Halo InfiniteBattlefield 2042Elon MuskGTA 6RTX 3080HDMI 2.1
For years many have complained about high fees for cable internet and television service from large providers with little changes being made while the the cable companies reclined in their chairs and milked consumers for all they could.

It looks like the small town of Wilson, North Carolina had enough of the shenanigans and after requests for more bandwidth failed, the city government listened to its people and launched their own company that delivers better features than the cable company. To top it all off, the city is offering the service to its residence for basically what is the city's cost. 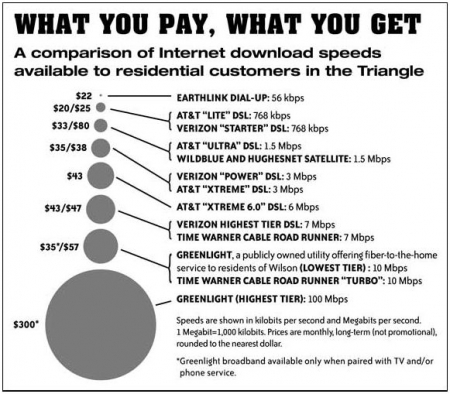 The city service named Greenlight Inc., offers cable internet, television, and digital phone service for a fraction of the price the cable company offers. To top it all off, subscribers can get all the bandwidth they desire and more, with packages including internet service in 10Mbit, 20Mbit, and 100Mbit speeds. And yes, those are synchronous speeds for the upload as well.

Time Warner doesn't seem to like this one bit and has been lobbying with the state goverment to get the local company shut down. It seems that they are worried consumers will realize they are really getting screwed, and that other cities will follow the same plan. 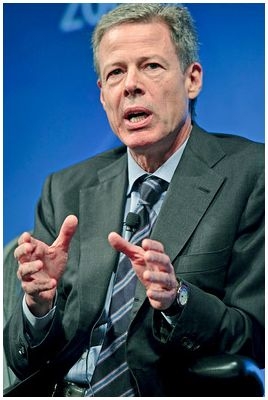 One can only hope that the Time Warner efforts are futile. Everyone will benefit from the introduction of such companies popping up all over the place, driving competitive prices down while providing higher quality service.

The city, has blasted the move, launching a new blog and urging the state government to reject the initiative. Writes Brian Bowman, the city's Public Affairs Manager, "I have a 10Mbps up/down connection at my house. Can't get half that from the cable company. I buy it directly from the City of Wilson. After less than a year of residential service, almost 3,000 Wilson citizens are subscribing to Wilson's fiber optic network. Local businesses can get up to one Gbps."

"Bottom line, these companies are using your state lawmakers to protect monopolies. It was wrong in 2007 when a similar bill died in the house and it's wrong today."