All NewsBusiness, Financial & LegalCases, Cooling & PSUContests & GiveawaysCPU, APU & ChipsetsDealsDisplays & ProjectorsGamingMotherboardsScience, Space & RoboticsStorageVideo CardsVirtual & Augmented Reality
All ReviewsAll ArticlesAudio, Sound & SpeakersCases, Cooling & PSUCPUs, Chipsets & SoCsComputer SystemsDisplays & ProjectorsGamingMotherboardsNetworkingPeripheralsStorageVideo Cards
GuidesGamingAsk the ExpertsNewsletterAboutForums
RTX 4090Windows 11Halo InfiniteBattlefield 2042Elon MuskGTA 6RTX 3080HDMI 2.1
One of Google's most well kept secrets has always been the details of their data center. But Google has finally taken the cloak off of the secret bunkers and is showing off their facilities and some of the hardware.

It has always been known that Google's server farm was large. While Google still isn't saying how many servers they have, they are showing off the hardware behind it all. The server that they showed off was a 2U rackmount with two hard drives and eight memory slots and featured its own battery backup. 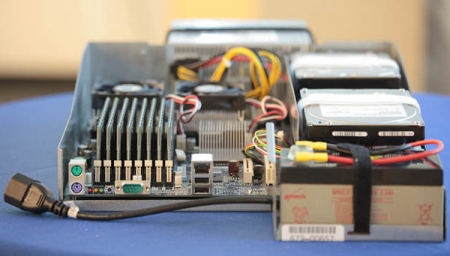 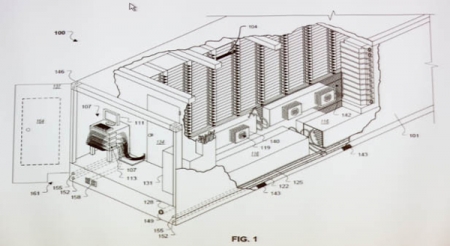 Most companies buy servers from the likes of Dell, Hewlett-Packard, IBM, or Sun Microsystems. But Google, which has hundreds of thousands of servers and considers running them part of its core expertise, designs and builds its own. Ben Jai, who designed many of Google's servers, unveiled a modern Google server before the hungry eyes of a technically sophisticated audience.

Google's big surprise: each server has its own 12-volt battery to supply power if there's a problem with the main source of electricity. The company also revealed for the first time that since 2005, its data centers have been composed of standard shipping containers--each with 1,160 servers and a power consumption that can reach 250 kilowatts.