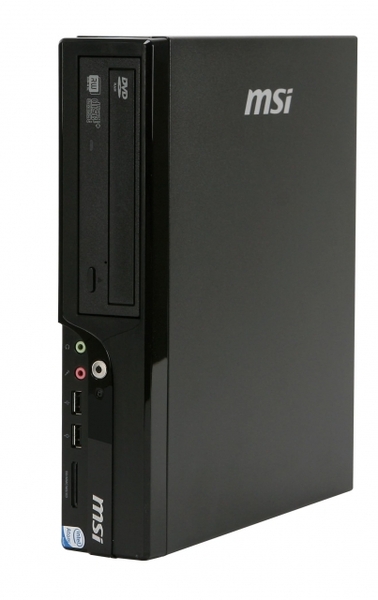 The D130 makes use of Intel's new Atom 330 dual-core processor and has 2GB of DDR2 memory. MSI also managed to squeeze in a Super-multi DVD burner and there is support for up to 7.1 channel surround sound.

Unlike the original single core Atom processors, MSI claim HD playback performance to be very good, but as MSI designed this mini PC with the HTPC user in mind, it's a bit of a shame not to see DVI (or better still, HDMI), with the only resident video output being standard VGA. But if you can get around that, it would be a nice efficient little unit to play your media from.

Full details can be had within the official PR here.

[Taipei, Taiwan] MSI, one of world's leading manufacturers of system, notebook, motherboard and graphics card products, launched its Wind NetTop which was widely praised by all sectors. It has now gained popularity among small-cheap and multi-functional computer products. A follow up on its victory, MSI leads the industry to unveil the first "Dual-Core" mini system, Wind NetTop D130.

Wind NetTop D130 is equipped with the latest Intel Atom 330 dual-core processor and 2GB DDR2 memory. Both high-definition video of HD-class home theater and other high-load applications, Wind NetTop D130 is easy to handle. Based on the origin of Wind series, Wind NetTop D130 using the same "ultra energy-saving" power design can save nearly up to 90% on electricity. Users no longer worry about overdraft electricity, even when the users use the computer for over a 24-hour period. MSI has broken the myth that high-performance is equivalent to high power consumption.