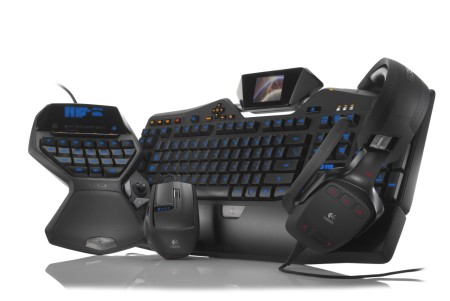 The line-up refreshment includes the new G19 keyboard which is the first Logitech keyboard to feature a full color GamePanel LCD; this being 320x240 in resolution and is able to provide extended information for over 60 gaming titles using the supplied GamePanel software. There's also a whole host of other additional features not seen before which you can read more about within the official PR.

Further complimenting the new lineup is the G9x laser mouse with unprecedented precision from its next-gen laser sensor, capable of being adjusted on the fly from 200 to a whopping 5000dpi. Two interchangeable snap-on grips are supplied that helps you choose a fit that best suits your playing style. On-board memory also gives the ability to save up to five ready-to-play gaming profiles and there's some other nice touches like the weight-tuning system and the choice of custom-color LEDs.

Last but not least is the new G13 advanced gameboard which was just given the CES 2009 Design and Engineering award; the best of innovations in electronic gaming. 87 buttons reside on the G13 and custom button profiles can be configured with ease. A 160x43 pixel GamePanel LCD resides up top which like the G15/G19 provides live game stats and system relayed information to keep you in the know while you've got all guns a blazin'.

For full details across the complete lineup of new gaming peripherals including their respective pricing, have a read of the official PR here folks.

LAS VEGAS - The G-series line of gaming peripherals from Logitech (SIX:LOGN) (NASDAQ:LOGI) gives gamers what they want: complete control. Today, Logitech unveiled an extension of its award-winning G-series by introducing three new products that deliver precision, high performance and customization: the Logitech G19 keyboard for gaming, the Logitech G35 surround sound headset and the Logitech G9x laser mouse. Delivering everything gamers need for a competitive edge - from programmable buttons to 7.1-channel surround sound and 5000 dpi laser sensors to backlit keys - Logitech's best-in-class gaming peripherals are engineered to deliver everything you have always wanted.