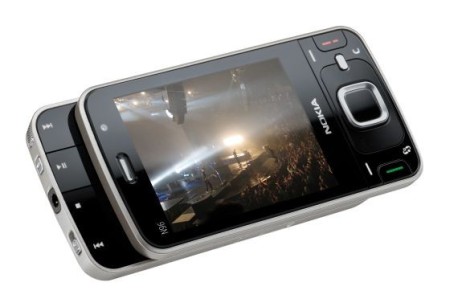 You can find a full listing of its features here and the official announcement here.

Espoo, Finland - Nokia today announced the availability of the much anticipated Nokia N96, its flagship multimedia computer in the iconic Nokia Nseries range. It boasts live TV, 5 megapixel camera with Carl Zeiss optics, turn-by-turn voice navigation, 16GB of internal memory that can be increased to 24GB with an optional microSD card, superior sound and music, N-Gage gaming and a stunning 2.8" display. First shipments of the Nokia N96 have started and it will be available with an estimated retail price of EUR 550 before taxes and subsidies.

"The Nokia N96 is mobile entertainment at its best, a fitting flagship for our Nseries range. It defines convergence by blending phone and multimedia options seamlessly with the unique Nokia Nseries dual slider that makes discovering and sharing experiences easy. Watch live TV and video, take high quality photos and geotag them to specific locations or directly upload them online via the fast internet connection - it is all about taking mobile entertainment and communication to the next level," says Jonas Geust, Vice President, Nokia Nseries.