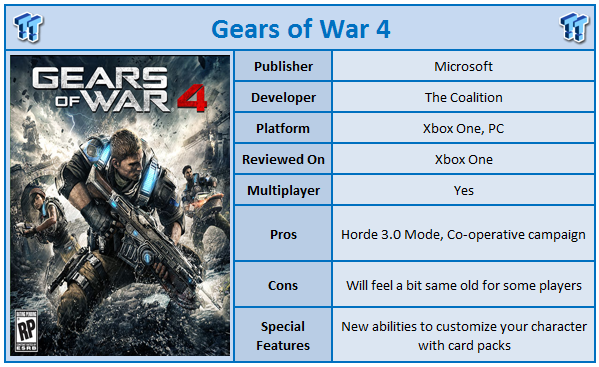 It is fair to say that the Gears of War franchise became one of the defining parts of the Xbox 360 lifecycle last generation. It was the game that truly showed the power of the Xbox 360 console and that a giant leap had indeed been made from the previous generation. Epic Games also managed to put together a new IP that gamers the world over got behind, so much so four games were completed before they decided to move on and do something new. Out of that, The Coalition was formed, a brand new Microsoft Games Studio that was tasked with bringing the Gears of War franchise to a new generation. Last year's Ultimate was a taste test for what would ultimately be its biggest challenge, bringing the game back with a new storyline and characters. Thankfully for Xbox One gamers, they have succeeded with aplomb.

Gears of War 4 picks up the story 25 years after the original series. The Locust as a threat is gone, and the world lives in peace. However, peace came at a cost with the COG army now replaced by robots and the citizens being ruled with particularly harsh policies and curfews. Those who have decided not to live under military rule, live in the wilds of Sera trying to survive. You play as JD Fenix, the son of Marcus, as one of the outsiders who discover that not is all as it seems and perhaps the world is not as peaceful as it appears. 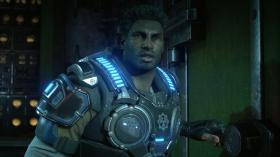 When it comes to the campaign, the gameplay is reminiscent of that already seen in the previous titles but with some incredibly epic battles and graphics on display. That's not necessarily a problem, people returning to Gears of War know what to expect, but if you are expecting a complete overhaul of the formula, you will be disappointed. Instead, you will find tweaks such as weather effects (procedurally generated) that will impact how you move through the environments. These show the actual power of the engine on display in the campaign, and while seemingly a minor tweak, they do add to the gameplay, as being procedurally generated, you have a different challenge each time you encounter them.

One of the more interesting additions to the campaigns is a tower defense style challenge that crops up every so often which is based on the Horde 3.0 game mode, new to multiplayer in this game. In this, you are tasked with limited credits to buy items such as gun emplacements to defend a particular area against waves of enemies. Replicating this new mode within the game's campaign could have been seen as a cheap way to get people to see it, but instead, it fits into the story well and offers a new change up from just running and shooting enemies repetitively. The campaign can, of course, be played co-operatively, and this is the way we recommend you do so. Single player, the campaign is enjoyable but not a memorable romp - but add a few friends, and it begins to shine even further, especially in the tower defense parts.

Perhaps the most interesting change to the series this time around is the introduction of the Horde 3.0 game mode. Gears of War was one of, if not the first, to introduce the horde style of game mode where you have to survive progressively more difficult waves of enemies. Up to five players can take part in this tower defense style mode (AI will replace any character not controlled by a human) where your one task is to survive. It works so well that it's hard to see why this was not introduced to the horde mode sooner. Classes also make an appearance for the first time with different skill sets assigned to each player based on their selection. Rather than just being skilled with a gun, you need to think about the best way to spend the credits allocated at the end of each round, and the best strategy to use the items which the team collectively buys.

Horde 3.0 is also deeply integrated into the game. Not only does it appear a few times during the campaign, but it does not require specifically built maps. Every multiplayer map already in the game can be used for Horde 3.0, and they promise future maps will include support as well.

Just like the original horde mode, matches tend to turn into a mad rush of just surviving while barking out orders to teammates (and receiving them in turn). Multiplayer is where this mode truly shines, and there is a decent amount of satisfaction to being successful.

Although it won't be everyone's cup of tea, and some will see it downright annoying, but Horde 3.0 also introduces 'cards' to the series. This where you randomly open packs of cards and are assigned cosmetic items such as character and weapon skins. On the flipside of this, The Coalition has promised that future multiplayer map will be free within public playlists, so that is something positive that has come out of this change.

As well as Horde 3.0, other regular multiplayer modes return including versus multiplayer and the aforementioned cooperative campaign. You can also play co-op in the versus multiplayer against AI bots, but other than that, it's the kind of thing we have seen before. That's not to say the multiplayer options are not enjoyable, but it's clear that the majority of effort went into Horde 3.0 and that is likely where you will spend a lot of your time. 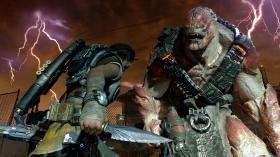 One thing we liked was the social playlist which randomly matches you with players and also randomly cycles (although it is put to the vote) through the various game modes on offer for multiplayer. Those who prefer to play specific modes are still able to, but the social mode is perfect for those who are just looking to get in a few quick games every so often. 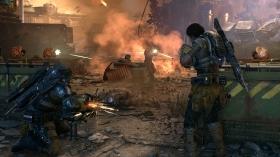 Visually, as you would expect from a game that became the Xbox 360 posterchild, the game is a tour de force of graphics technology. The game is also available on the PC (where the game does look significantly better and can run at a higher framerate), but the Xbox One is no slouch either. During our playthrough of the campaign, we did not notice any framerate drops despite some epic scenes taking place, and the procedurally generated storms appear without the machine looking to break a sweat. Gears of War is a franchise that you come to for not only some top quality gunplay but also for the graphics and in that regard you will not be disappointed.

Gears of War 4 was always going to be risky for Microsoft. Epic Games left the franchise behind in their hands after wanting to go down a different path, and just like with the Halo series, Microsoft had to find another studio to get the job done and retaining some of the Epic staff clearly paid off. The Coalition studio may be new to the series (aside from the Ultimate re-make), but it's clear they get why this was such a popular series on the last generation of consoles. Horde 3.0 is almost a big enough change to entice Gears fans, but the solid campaign and versus multiplayer just tops it all off and leaves us with a game that while likely won't be a contender for overall game of the year awards, remains one that Xbox One owners should look into buying.