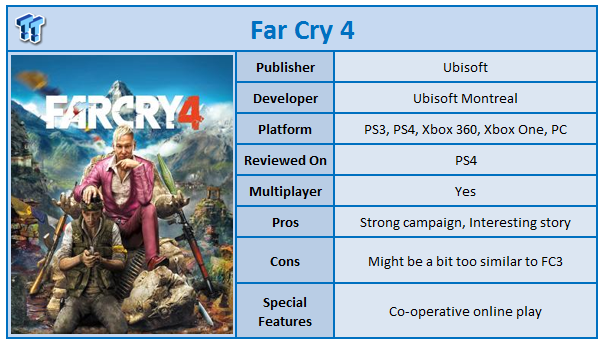 When Vaas first uttered the words 'Do you know the definition of insanity' during the unveiling of Far Cry 3, my interest was piqued instantly. Ubisoft was clearly building a psychotic, smart character to challenge the player over and over again in a huge sandbox world. Far Cry 3 has been and gone, winning plaudits the world over for its stunning gameplay, so a follow up was inevitable. Far Cry 4 in many ways is a repurposing of Far Cry 3, however, to dismiss it as only that is to completely ignore some of the improvements made over its predecessor. Far Cry 4 surpasses FC3 in many ways, and takes the psycho protagonist to an even deeper level, with more decisions and impact for the player to make along the way.

In Far Cry 4, you return to Kyrat as an ex-pat who immigrated to the United States with their mother when they were a child. Kyrat is a fictional city in the Himalayas and where the majority of the game takes place. It is also a dictatorship, ruled by one Pagan Min, a dictator on the level of Vaas from the former game, but one that is prepared to go even further. The story in Far Cry 4 is by no means throwaway, and in fact, many times will keep you forging ahead in the campaign, looking to find out what happens next - especially with the decisions you can make along the way to impact the game world. 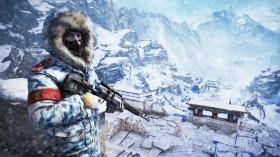 Far Cry 4 is again set in a massive open world, free for you to explore from the outset and laden with vehicles to make travelling around the massive expanse of land even easier. It's also a completely open world game that is prone to events just occurring. There are some which are somewhat scripted such as the 'Karma' events and those which just happen. You might be driving along to a mission only to run into a huge enemy presence or just a random event taking place. It is these random events that make the world feel living and breathing. They can also assist you. By completing certain events, you can gain experience and other rewards, so it's worth investigating things that just pop up as you move about.

On the main campaign side, you join a freedom fighter force known as the Golden Path who have been for a period of time attempting to end the reign of Min and restore peace and democracy to the land of the main characters birth. Throughout this campaign, some tough decisions need to be made as to how to advance the story and which main character of the Golden Path you wish to follow. This really mixes up the game, sends the story in different ways, and in many ways every player could have a slightly unique story. It also significantly enhances the replay value of the game, although to be honest, the game is not lacking without it. 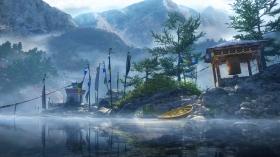 Throughout the course of the 12 hour plus campaign, you will find yourself abseiling down huge cliffs, flying through the air in a little helicopter machine, driving a long way, and just generally having a lot of fun. The missions are quite varied as well. Instead of just go here and shoot things, sometimes stealth sequences are thrown into the mix, and whilst most of the time the aim is to clear out the enemy, you can usually achieve your objectives in many ways. Remaining hidden from the enemy is advantageous because they can call significant amounts of reinforcements if you are spotted on most missions.

When it comes down to it, the actual gameplay, the game shines. Picking up where Far Cry 3 left off, the game is of course primarily a first person shooter. However, it is changes such as being able to ride on the back of an elephant that really make this game a stunning success. You also need to craft items to improve your weaponry and abilities. Instead of just purchasing more inventory space, for example, you need to craft a wallet. To do this, you need to hunt specific animals and skin them. It adds another dimension to the game and a challenging one at that. Most of the animals can be ferocious when attacked and getting their skins is not so easy. 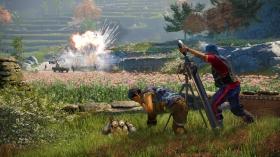 Aside from the main campaign missions, one of the other tasks is to unlock areas of the map for quick travel. This is done by climbing towers (fast becoming a common Ubisoft trope) to get rid of the propaganda broadcasting systems. There are benefits to this other than fast travel, such as being able to view other items in the area that were previously greyed out. For those who are not fans of doing tasks such as this, they are entirely optional, but it does make the game a bit more difficult to complete.

In terms of the environment the game is set in, it is stunning. This is a game that clearly is using the power of the current generation system. You can stand on the top of a cliff just admiring the mountains in the distance and the draw distance is also significant. One thing we noticed is that the game really never misses a beat. Despite huge explosions on screen, large draw distances and tons of action, the frame rate remained rock solid for us throughout. At least we did not notice any major frame rate issues, despite the epic nature of the game. Voice acting was also impressive, especially of the evil protagonist, and the propaganda style radio came across as authentic.

Multiplayer comes in the form of complete online co-op and also player versus player battles. In online co-op, you can tackle the campaign and side missions together with one caveat. If the internet connection is dropped, you will be kicked from the game as opposed to switch to a single player mode. This actually stopped us for the most part playing the campaign in co-operative mode more as a precaution, but it does work well. There is also a map editor that ships with the game, allowing you to generate single player/co-op missions, and it's actually quite detailed and easy to use.

Far Cry 4 is a stunning game that builds upon its predecessor well. It may follow the same path of the main character having to slowly build up a force and take out an evil dictator, but despite it being almost the same structure, it works. The additions made including the new animals and location really do mix it up, however, it must be said that if Ubisoft is to return to the Far Cry universe for a fifth time, doing this over again is not going to be enough. That said, Far Cry 4 is one of the must-play games of 2014.

PRICING: You can find Far Cry 4 - PlayStation 4 for sale below. The prices listed are valid at the time of writing but can change at any time. Click the link to see the very latest pricing for the best deal.