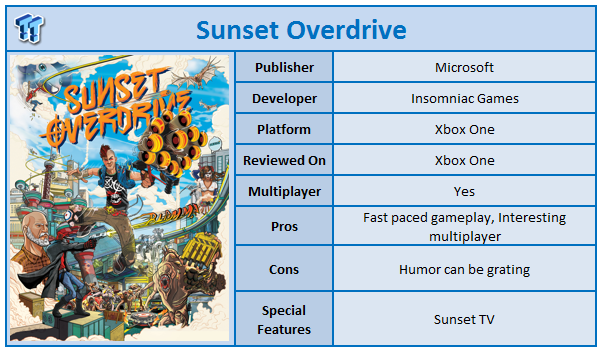 When previous Sony darling Insomniac Games announced that it was building an Xbox One exclusive, the gaming world was surprised to say the least. Insomniac had already begun to move away from Sony exclusivity with its poorly received Fuse, a third person action squad game, so when Sunset Overdrive was announced, there was excitement tinged with a bit of caution, considering the studios previous game.

However, Insomniac Games had proven in the past that it could produce quality titles and with Microsoft managing to lure it as an exclusive, Sunset Overdrive became one of the most anticipated games of the year for Xbox One owners. Thankfully for them, aside from a few slight hiccups, the game has been worth the wait.

Sunset Overdrive begins during the release of a brand new energy drink in the town of Sunset City. Rushed to market, Overdrive is the hip new drink that has failed to go through the correct testing and anyone that drinks it, turns into a mutant. After the launch party, the game picks up with you basically trying to escape the city, and with the help of a few quirky friends, try to get the truth behind the drink and why it causes people to turn into mutants. The story itself is not the strongest around, but it does get the job done and is interesting enough to make you want to play more. 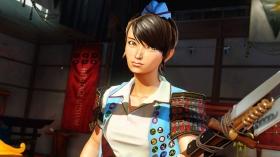 Where the story and surrounds do come into their own is the humor in the game. Whilst it is very much hit and miss, Sunset Overdrive generally is a funny game. The only time that it really loses that charm is when it tries to be too clever for its own good and break the fourth wall. Times such as when the character on screen tells you as the player to press the start button or complains about an upcoming mission because it's so boring. Aside from this, the game itself carries its attempted humor well with many of the game's non-player characters being unique and interesting, to say the least.

Perhaps one of the biggest surprises, given the marketing campaign Microsoft has run with the lead male character, you can completely customise your avatar to be male or female with a whole bunch of different clothing. As you play more, additional clothes are unlocked, and whilst it's only a cosmetic change, it does allow you to play the character how you want to. Along with this, you can unlock 'Amps' by gathering items in the world and 'cooking' them.

Amps are power ups for your character that are triggered by the style meter. To build that meter, you need to move around the world in fluid motions and take enemies out stylishly, as the name implies. Movement is key in this game and generally if you are not continuously moving, you will be overrun by enemies in a very short space of time. 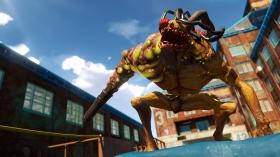 This does make the first two or so hours of the game a bit more frustrating than it should be, as it does take time to become accustomed to the way you can move about the world. You can slide on wires, jump on trees and other items in the world to bounce and even part way through the game begin to wall run. Movement in Sunset Overdrive once you have learnt the controls is an absolute delight. You will get to a point where even if the game says the next objective is quite far, you won't mind because the traversal of the world is so fluid and easy that its actually fun to play.

And that is a key word with Sunset Overdrive, fun. Right from the outset, the game clearly wants you to continuously feel like you are having fun playing it. Whether it be the humorous characters present throughout or the non-stop action, this game just generally puts a smile on your face - except for one key facet, tower defence. Sunset Overdrive includes a tower defence offshoot set in the evening where you can unlock more amps to play with. This was our most frustrating element of the game and did not really seem to fit.

Thankfully for the most part, despite sometimes overloading you with enemies, the game does not severely punish you for dying. Instead (except in the previously mentioned tower defence mode), you generally return very close to where you were battling and with your mission progress intact. This is actually a very smart move on the developer's part because it encourages you to try things that may seem stupid, but also keeps you from getting too frustrated with the game. Another master move was that if you happen to fall from a very high platform during a mission, instead of making you traverse all the way back up, the game will place you back near where you were before the fall. 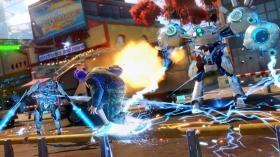 In terms of the missions and quests in the game, there are plenty. Those of you with tendencies to want all achievements will likely get many, many hours out of this game with numerous collectables available and other side quests to keep you going. Sometimes you will need to complete side quests (such as gain 'x' item) to be able to continue the main story, but for the most part, you can mainline the missions.

Missions are generally found in hub style areas and usually culminate in a boss fight. Boss fights generally are not exactly fun to play, but in Sunset Overdrive, the combination of how crazy the bosses are, plus the low punishment for dying, makes it actually enjoyable to take them on. Finishing missions will give you badges to buy overdrives with that basically boost your characters health, weaponry, or defence stats. Sunset Overdrive is not even close to an RPG, but has some very basic elements from that genre included.

On the visuals side of things, Sunset Overdrive impresses in two ways; the graphics themselves and the frame rate. The frame rate during our play never stuttered and never dropped below smooth. Despite a gazillion things happening on the screen, the frame rate was rock solid, and given how graphically impressive this game is, that is a feat in itself. The visuals are vibrant bright colors, which is a nice change, and the world feels almost like a cartoon. Sound wise, the voice acting gets the job done, and the music, whilst nothing to write home about, does not feel out of place or cheap. In fact, all of this game smacks of 'AAA' status and has a high level of polish. 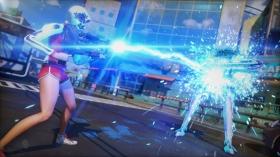 On the multiplayer side of things, the game blurs the lines between single and multiplayer very well. You access multiplayer by visiting a photo booth in the main single player portion of the game. After which you are paired up with people and then vote on a quest to take on. It's an interesting take on the game that allows you to jump in and out of multiplayer almost at will. The end game of multiplayer is night defence (the previously mentioned tower defence game) and how well prepared you are for that is based on how well you do in the previous missions - it's super unique and fits the game world very well indeed. They could have cheaped out and gone player versus player, but instead have come up with a multiplayer mode that is unique and interesting.

Sunset Overdrive was a game closely watched by many gamers due to it being exclusive to the Xbox One. Insomniac Games also needed a win after Fuse failed to shine and people wondered if Insomniac Games would be better off going back to Sony exclusivity. Based on this effort, the answer is an emphatic no. The game does have a few problems, but it's a very polished title that shows off the power of the Xbox One well. If you have an Xbox One console, you owe it to yourself to at least try this game. It's unique, its new IP and it as polished as any other AAA title on the market. Shame about some of the humor though, it really does pull it down.

PRICING: You can find Sunset Overdrive Day One Edition - Xbox One for sale below. The prices listed are valid at the time of writing but can change at any time. Click the link to see the very latest pricing for the best deal.

United States: Sunset Overdrive Day One Edition - Xbox One retails for $59.96 at Amazon.