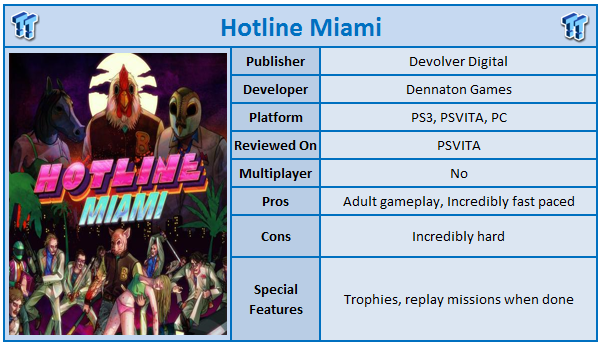 Last year there was really one game that became the darling of the PC indie world, Hotline Miami. It was a break out hit and talked about incessantly on message boards. Console gamers had to look idly by and wonder what the game is like if their PCs were not up to scratch at running the game. Earlier this year Sony announced that the game would be coming to the PSVITA and PS3 systems. This was an announcement that was met with both excitement and also worry. Could one of the twitchiest PC games around translate to the PS3 and Vita controls or was it a game that just belonged on the PC? Thankfully for Sony the answer is that Hotline Miami is the perfect fit for the PSVITA and PS3 system.

Hotline Miami has not got much of a storyline and that which is present is incredibly weird, to say the least. You play as an unnamed protagonist who picks up the phone one day to be told to go and pick up a box of food at a particular location. Inside the box is a message to go and return a brief case, whilst eliminating everyone at the location via any means possible. From there the madness and mayhem of the game begins. 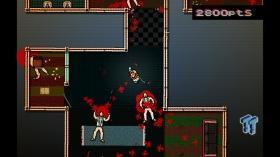 To be honest, Hotline Miami does not need much of a storyline, because it's the gameplay where it really matters. On paper Hotline Miami sounds like a game that would turn a few people off. Killing many people in quick succession, blood splattered all over the ground and high powered weaponry present everywhere. If this game was anything but 2D, the ratings agencies around the globe would be banning it left, right and center.

However, this is a 2D game and plays very much like the original Grand Theft Auto. You control the player from a top down perspective (like a floor plan view) and have to quickly get through the missions set in various buildings. As the game progresses, the challenges get harder and start to be set on multiple floors. Another challenge is that the environments begin to change and include things such as glass windows, allowing enemies (and yourself) to shoot through them. The difficulty progression is balanced incredibly well and you never feel like the game is being 'cheap', so to speak.

The hardest part is that the protagonist can only take one hit or bullet before being taken out and that is where the true challenge lies. You need to quickly move through each room, perform the tasks quickly and get out, all the way knowing that one false move and you have to start again.

To assist with this, when you reach high scores, the game unlocks new masks for the protagonist to wear, such as a zebra or horse mask - these mask change the game in many ways. Some masks allow you to have silent guns, and other masks allow the protagonist to kill enemies with a single punch. Working out the right mask to use in the right situation is all part of the allure of the game. And here's the surprising part - Hotline Miami in many ways is not an action game, but instead a puzzle game where you have to figure out the exact sequence of events to follow to succeed.

This may sound frustrating, but it is anything and this can be put down to the quick restart option. Whenever the protagonist is taken out, within about half a second, you are back playing again, trying out a new strategy. This is the crucial point of the game, had this not been present, it would have completely killed the flow of the game and frustration levels would've through the roof. 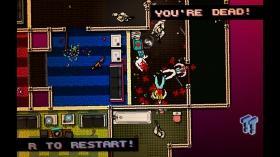 A few changes have been put in place for the PS3/VITA release. First of all it is a cross buy title that allows you to purchase the PS3 and VITA game for one price and there has also been some trophies added and cloud play. Hotline Miami really is the first game that we've found the cloud save sharing to be absolutely essential if you own both systems. Hotline Miami is perfect for a commute and then once you get home, download the save and keep going. Trust us, you probably won't want to be finishing missions two or three times - until you finish the game that is, replay value is high. 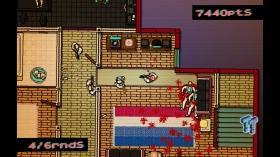 As you would expect in a game like this, the graphics and visuals are not the most impressive aspect of the title, however on the PSVITA screen, they really pop and are vibrant. Although, it does allow the game to run at a fast tilt - it's our opinion that the visuals and graphics serve the game well. It has to be remembered that this is a very mature, adult game and if the visuals were too realistic, it just may be a step too far for some people. The soundtrack is one of the best around and truly amazing. Even though it will restart many times as you inevitably get beaten around the head within the game, it flows perfectly each restart. As the title screen says on the VITA, you really need headphones to get the most out of it.

Hotline Miami is a controversial game with a controversial setting and story. However, once you look past the violence and destruction within, you start to see that it is not a 'shock' game. It is not one that relies on its shock level and adult content to actually be interesting. In fact, the gameplay probably could have been done in another way and been just as good. The PSVITA is fast becoming the system to have to play indie games on and Hotline Miami is one to add to that list.