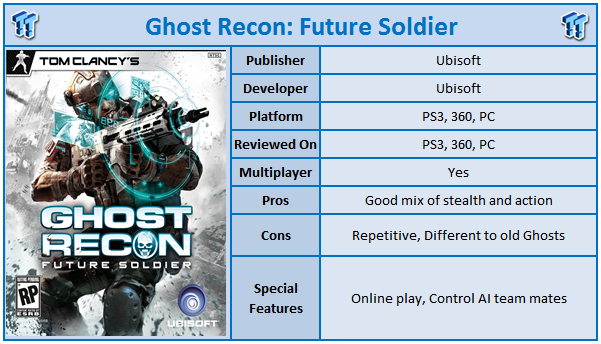 Many wondered if this game would ever see the light of day. Originally announced around the same time as Splinter Cell: Conviction, it's been a while since the ghostly military figures have made an appearance. And in many ways this had us worried about the game. Generally long developments mean development issues - and not good ones. However, it appears that delaying the game and starting again or at least changing a lot of the gameplay has been for the better. Ghost Recon Future Soldier is a little different to what we have seen in previous Ghost Recon games and in some ways represents a hybrid of traditional Ghost Recon games along with Splinter Cell style gameplay.

As you would expect with a name displaying Tom Clancy's favourite name, political problems is the name of the game here. The Russian president has been overthrown in a coup and a rogue military installed, something the United States is not happy with. This new president is taking power by force rather than democracy and it is up to you as the Ghosts to help the resistance on the ground and re-take Russia for its rightful president. If it sounds familiar it's because it could have very easily been ripped from headlines of the last 12 months in certain regions of the world. 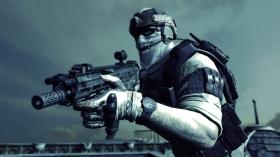 Once you get into the actual gameplay, it becomes a bit more familiar with the mantra if the ghosts have seen you, you are already dead continuing throughout. One of the more interesting gameplay changes this time around is something that has been inherited from Splinter Cell: Conviction. As you progress through each level, you generally have three counterparts with you. Instead of directly taking command, you offer targets to them. So, as you move through the level, you can tag enemies and then in co-ordination take them out.

This is one of the most important aspects of the game as Ghost Recon Future Soldier is not easy. If you are caught unawares you may as well hit restart because gunfights generally go poorly for the player. One of the hardest tasks is to ensure you have taken out all the enemies in one co-ordinated shot, or at least ensure you do not alert any nearby. This tactical side to the game gives the game a bit of a fresh look. Another thing that's carried through from Splinter Cell is objectives appear directly in the world.

The other side to the game, the Future Soldier area is the weaponry. As you progress through the game more and more advanced weaponry is offered to your team. Many of these are a lot like the perks you see in a typical Call of Duty game such as drones to mark targets or remote control cars to get through tight spaces. There are also times where you are trying to protect a walking piece of machinery. One thing we really like about Future Soldier is that in general the technology present throughout seems realistic and something that could actually exist in war today. That is aside from the cloaking camouflage, but we won't go there.

The missions themselves are varied and interesting. Sometimes you will be taking out a specific enemy, other times disabling missiles, but by the time you have been through the games fourteen missions, you will have conduct missions in the day and night, and in various environments. It's not the kind of game you can play for hours and hours on end because the somewhat repetitive nature of the gameplay can get stale in lengthy sessions.

One thing the game is very good at is making you think the mission is over, only for things to go completely haywire and the ghosts challenged to even survive let alone complete the mission. However, this is not overused and is not easy to predict. The game becomes more difficult once spotted because enemies appear out of nowhere in their droves. So, you are punished significantly for being found. To aid with this during the start of each mission you can use the gunsmith to build unique weaponry. Customising the guns is one of the more interesting aspects of mission preparation.

Visually the game is very impressive. The game does not skip a beat even with large explosions and the frame rate is rock solid on the PS3 as tested. The environments are large and varied allowing you to tackle each situation thrown at you in various different ways. It is generally possible to finish off most areas without even being seen. The mission variety also helps with this with snow, desert and jungle the order of the day. The ghosts themselves are highly detailed and the weapons display the changes you make in the gunsmith mode. Sound effects are typical explosions and gun fire with the voice acting doing the job, but not overly impressive.

Ghost Recon: Future Soldier may have taken a very long time to arrive and been thrown back at the whiteboard a few times to get it right, however, it's been worth it. Ubisoft didn't want to ruin its franchise with a bad game and it's to their credit that they took the time to do it right. There are a few issues with Ghost Recon, and it's not exactly the traditional GR game, but overall it strikes the balance between action and stealth well and is worth a look.