All NewsBusiness, Financial & LegalCases, Cooling & PSUContests & GiveawaysCPU, APU & ChipsetsDealsDisplays & ProjectorsGamingMotherboardsScience, Space, Health & RoboticsStorageVideo Cards & GPUsVirtual & Augmented Reality
All ReviewsAll ArticlesAudio, Sound & SpeakersCases, Cooling & PSUCPUs, Chipsets & SoCsComputer SystemsDisplays & ProjectorsGamingMotherboardsNetworkingPeripheralsRAMStorageVideo Cards & GPUs
GuidesGamingAsk the ExpertsNewsletterAboutPrivacyForums
AMD Zen 4Intel ArcBattlefield 2042RTX 3090 TiRTX 4090RTX 4080GTA 6Elon MuskHDMI 2.1
When Sony first decided to publish God of War it was highly unlikely they would have realised how popular the series would become. Now a system seller, God of War and Kratos is synonymous with the PlayStation system, one of those games that almost every PlayStation owner has at least heard of, if not owns. When the PS3 was announced, everyone awaited the announcement of God of War, but to our surprise the second title remained on PS2. Finally, the third and final (so they say) title in the series is here and if epic is what you want, epic is what you get.

God of War 3 picks up at the end of the second game. Kratos is continuing his revenge against Zeus and he is yet again stripped of all his power. That's right, yet again you have to start from scratch and build Kratos as a killing machine which is somewhat of a disappointment. The story itself is not all that great. Kratos wants to find Zeus and kill him and to do so he needs to solve a number of puzzles, beat a number of bosses and chat to a few people. Really, the story is not where this game shines.

However, the story is part of the aesthetic of the game which really is second to none. The design values behind God of War 3 are stunning and Sony has used every cent of the forty four million USD it reportedly took to make well. From the opening cinematics through to the end the game is non-stop unbelievable quality. The graphics, the sound, the action, it just all adds up to one of the best games we have ever played. 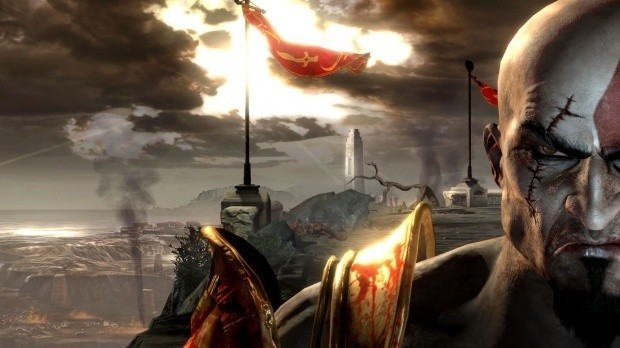 For those of you who have played GOW 1 and 2, you would be very familiar with the gameplay mechanics. It's an action adventure with a bit of puzzle solving thrown in. The game is designed in such a way that you generally will only get stuck for ten or so minutes before figuring out what to do. The puzzles are not taxing and the combat is designed for action rather than difficulty and as such God of War is an incredibly enjoyable game to play.

However, we can't help but criticise that the formula for the game has remained basically the same. For three games now we've pretty much been asked to do the same thing and while the old adage goes 'if it aint broke, don't fix it', some of the gameplay elements are starting to show their age, especially when they are on the powerhouse PlayStation system compared to the now ageing PlayStation 2.

With that said, the game is full of surprises. There are many times where you will think you have the game figured out and can predict what happens next, but then a curveball is thrown your way. Many times we were shocked and surprised in the direction the game went, but overall it boils down to running, jumping, solving a puzzle and beating a boss before moving on. The other problem the game has and this is no surprise, it is single player only and so once it's done, it's done. Sony is talking DLC with the game, but this is unlikely to be extended beyond some time attack arenas and other small areas rather than large chunks.

Visually the game is truly amazing. The graphics are second to none and the level of detail on the characters and environments is stunning. The CG is so well done in this game that it's hard to believe a game console is producing this level of graphics, especially in 1080 high definition. The brutality of the game is also carried by the graphics with Kratos tearing enemies apart at ease and boss characters falling in a number of brutal ways such as being smacked in the face over and over again.

And it is here we need to mention the final downfall of the title. We understand that the mythology in which God of War is set is quite a brutal universe, but there are some instances where the game almost goes over the top. The blood is gratuitous and the nudity strong and while in general this is ok and fits with the universe, there are many times where the game reminds you that it has some immature writing in it and that is disappointing for a game that is clearly aimed towards adults.

God of War 3 is one of those games that every so often comes along and sets a new standard in some area of gaming. In this case it's the graphics and while the game play is still solid, it is starting to show its age a little. Thankfully the developers realised this may be the case and God of War 3 is a rollercoaster ride of surprises from start to finish. If you own a PlayStation 3 you simply must get this game!