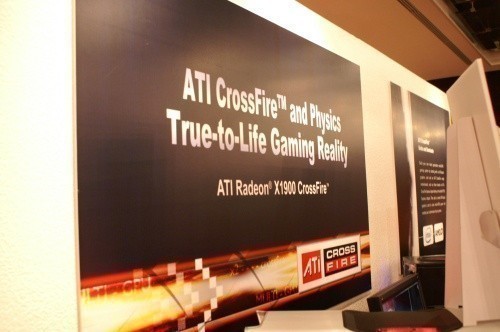 Today during the Computex computer trade show we met up with the PR Director of ATI to talk about what the Canadian graphics chip firm is most excited about during the show - hardware physics. When we walked into the ATI room, we were directed straight toward to the display area whilst passing a notebook running impressive HD-DVD content - which in its own right is still interesting - and a bunch of other stuff such as AM2 motherboards.

At the their display room at the Grand Hyatt, ATI were showing off live demos of their Havoc-powered hardware physics solutions which are due to be available for sale by the end of the year or early next year. ATI weren't sure on an exact release date but the technology seems quite advanced at this early stage.

ATI had a system based on their upcoming RD600 chipset with Radeon X1900 Crossfire and Conroe CPU - they're calling it "True-to-Life Gaming Reality". ATI's method of hardware physics is different to the AGEIA PhysX method in that ATI are able to program a GPU (such as the Radeon X1600) to handle the physics tasks, rather than having to produce a standalone physics processing card. 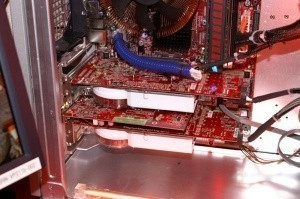 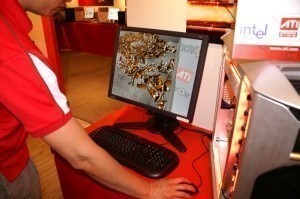 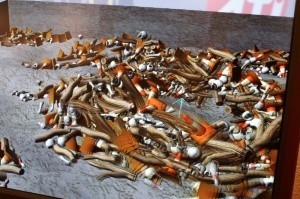 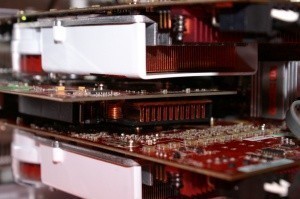 We recorded some short 640 x 480 video footage of the ATI hardware physics in action with commentary from Chris at ATI. The video is about 52MB and can be downloaded here (Please do not link directly to the video URL!) 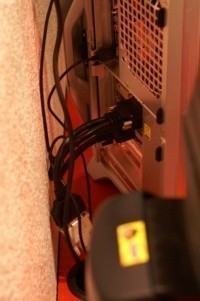 After taking a closer look at the back of the system, we discovered Crossfire was not actually operational. While the system does indeed have two graphics cards installed (which act as actual GPU's), Crossfire was not enabled. The top X1900 card was connected to the X1600 rather than the other X1900 card below it - sneaky ATI!!

As this is the case, it would seem like ATI still might have a little bit of work to do before their version of hardware physics is ready for the consumer. We also noticed some type of adapter on the X1600 (that explains why the card sticks our further than the rest) which probably goes from a PCI Express 16x slot to PCI Express 1x or whatever the motherboard was using - we couldn't see.

ATI seems to be progressing quite well with their version of hardware physics and the idea is quite a good one. We like the idea of being able to use an older graphics card you have and put it to use rather than selling it for less than you paid. And at about $265 USD for a BFG AGEIA PhysX card, the Radeon X1600 Pro solution is looking much better at around $150 USD. We'll look out for nVidia's solution later in the week at the show.