Most storage news right now revolves around falling SSD prices but there are a number of new low-cost products coming to market. Just last week we tested the Inland Professional SATA III sold by MicroCenter that sells for just $75 (480GB). This week we look at the Mushkin Source, a Silicon Motion, Inc.-based (SMI) SSD using the latest 3D flash memory technology.

Mushkin announced the Source series not long after CES this past January. The company moved to a full lineup comprised of SMI controllers with the NVMe Pilot series at the top and the Source on the very bottom.

The drive uses a DRAMless architecture, like the Inland Professional SATA III and several other very low-cost models entering the market. These products are a little different from the planar flash DRAMless SSDs we dogged in articles over the previous two years. 3D flash improves performance, and of more concern, endurance. Still, this class of SSD is in a lower product tier compared to mainstream SSDs that often cost just a little more.

Mushkin brings the Source to market in the typical four sizes that range from 120GB to 1TB. This series does come in two form factors, 2.5-inch and M.2 2280, both using the SATA III interface.

The sequential read performance for the three largest sizes is 560 MB/s and that dips to 510 MB/s for the 120GB model. The sequential write speeds all surpass 515 MB/s for all of the 120GB that writes large block size data at 440 MB/s. The random read performance takes a step down with each size but starts out at a brisk 78,000 IOPS for the 1TB Source. The 250GB gets a 54,000 IOPS rating but the 120GB lets that drop to just 29,000 IOPS. Random write performance stays fairly constant thanks to the SLC buffer. Mushkin claims between 81,000 and 79,000 depending on the capacity.

Prices start at just $35. That is an amazing entry-point for any modern SSD. The 250GB drive moves the needle to $56 and the 500GB costs $105. The large 1TB Source SSD comes in at just under $200. Mushkin backs the series with a 3-year limited warranty. The warranty covers 50 TBW for every 128GB of raw flash. The 1TB drive comes with 400 TBW and the rating simply cuts in half with each step down the capacity ladder. 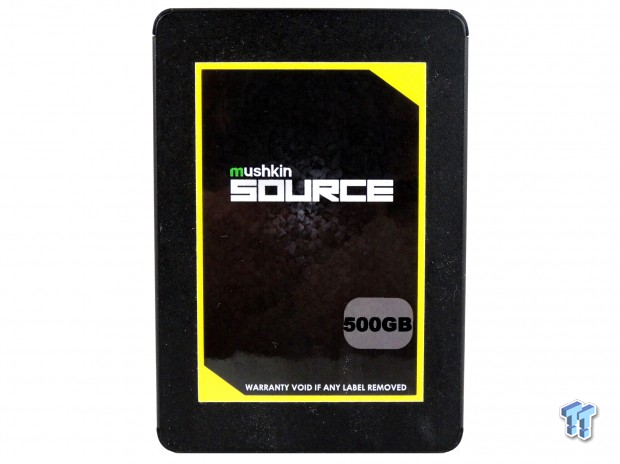 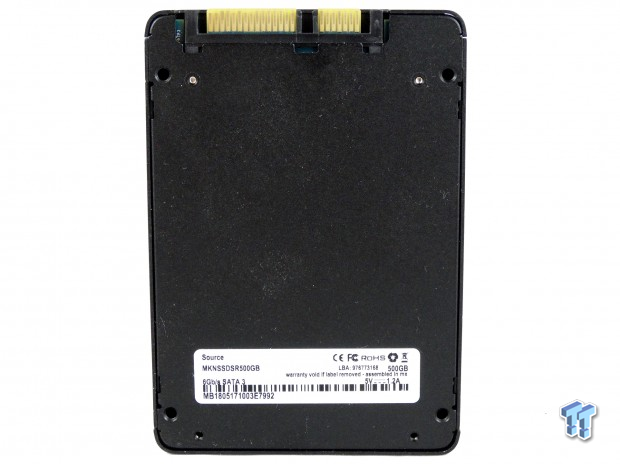 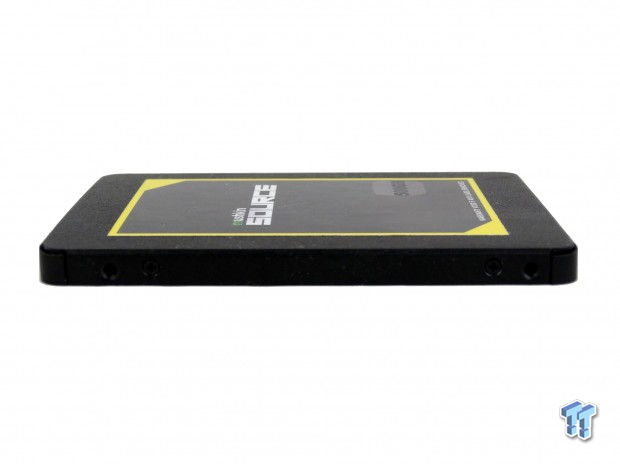 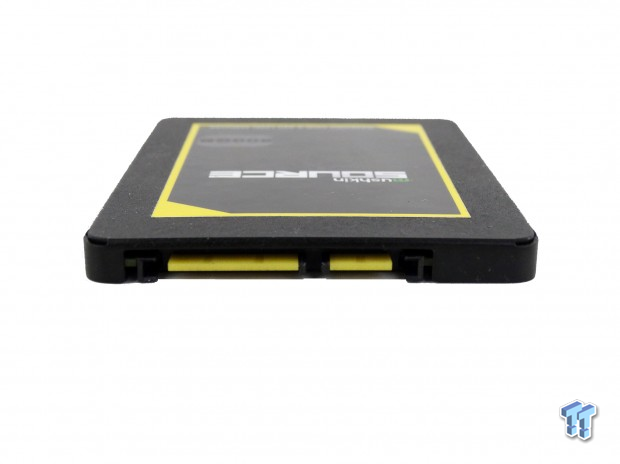 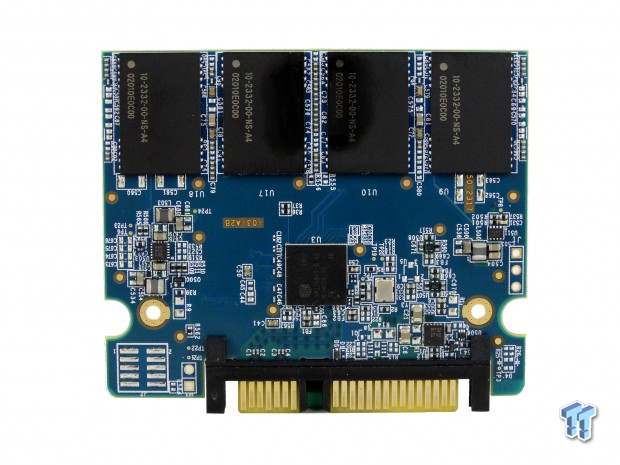 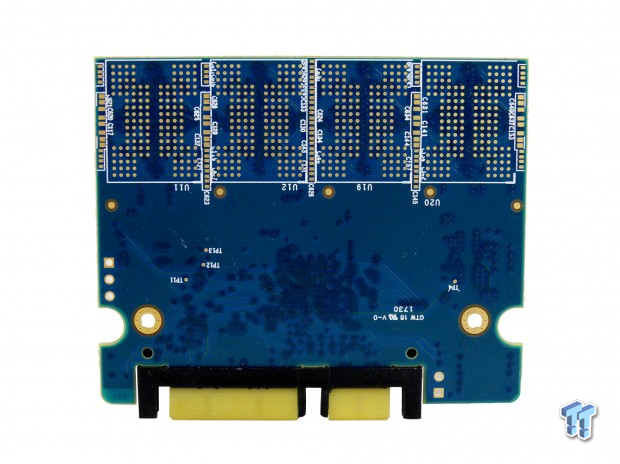 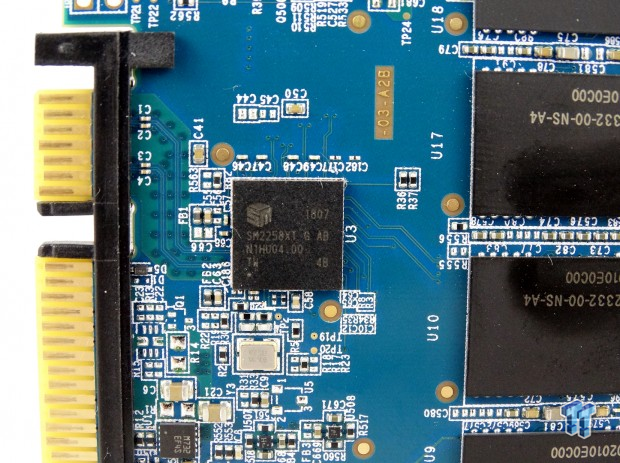 The Mushkin Source is a basic SSD design with little flair. It does use a metal case instead of a plastic design we often find on entry-level models, a nice plus for the series. 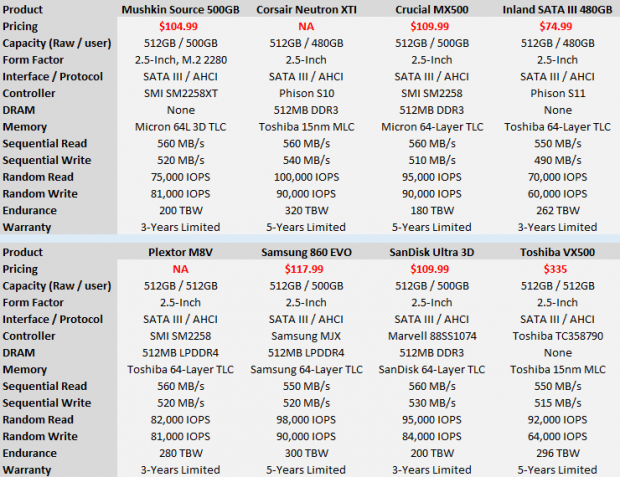 The Mushkin Source will go toe-to-toe with our standard 512GB class products in the comparison charts. We removed the Intel 545s to make room for the Inland Professional SATA III, another low-cost DRAMless SSD.

The Crucial MX500 and Samsung 860 EVO are the most popular SATA SSDs in this capacity and the SanDisk Ultra 3D / Western Digital Blue 3D also garner a lot of attention. The Plextor M8V, Corsair Neutron XTI, and Toshiba VX500 were also included. 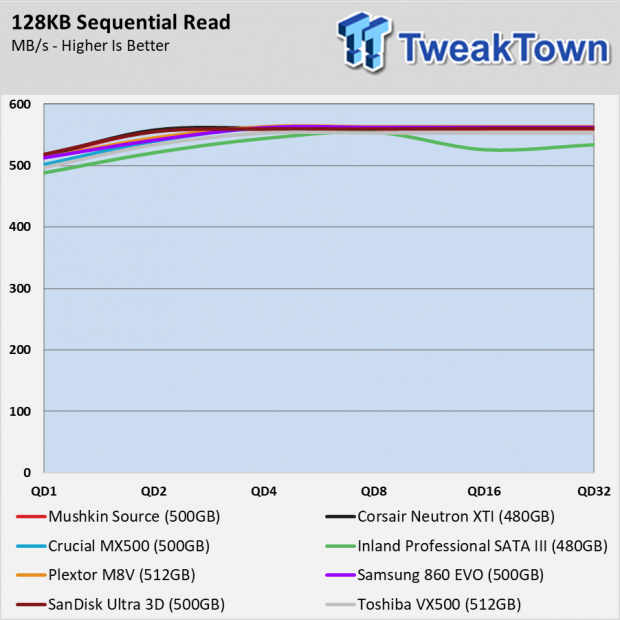 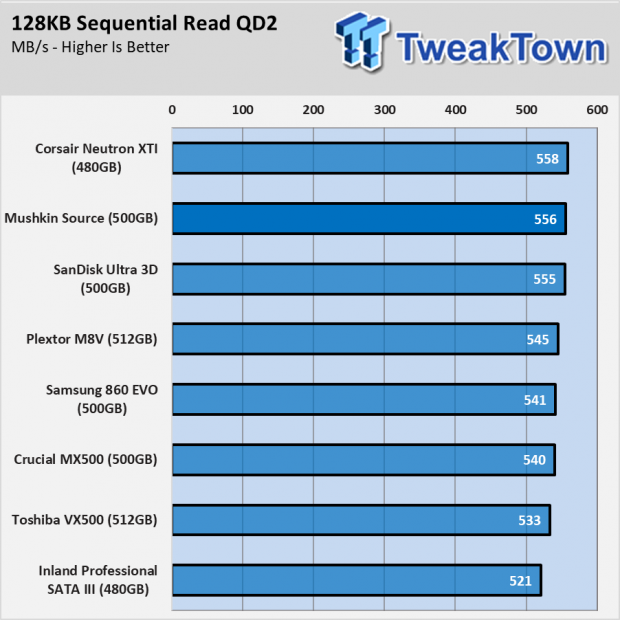 DRAMless SSDs perform well with large block size sequential data - movies, music, large photos and other similar files. The Source follows the rule and fits right in with the best SATA SSDs shipping today in this area of performance. 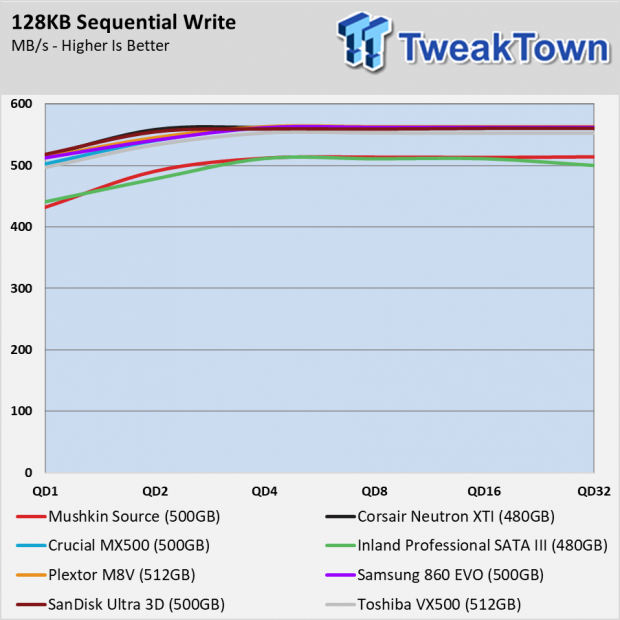 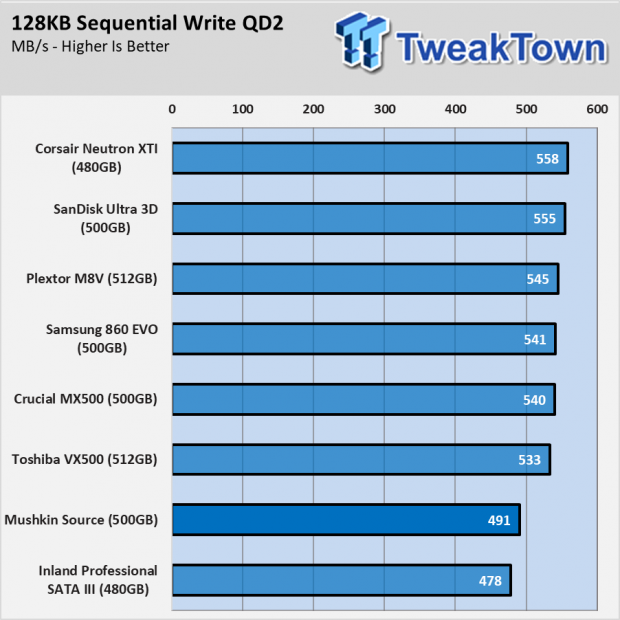 The two DRAMless SSDs in the charts today both show lower sequential write performance. The Mushkin is slightly faster than the Inland Professional, but both drives are so close that you wouldn't notice writing large block size data. 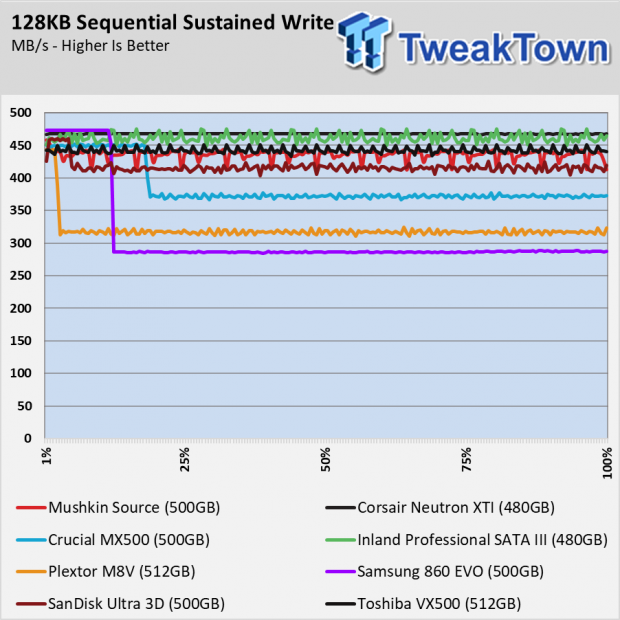 The Mushkin Source 500GB doesn't lose a lot of performance moving large amounts of data to the drive. In this test we write 128KB block data at queue depth (QD) 1 until the entire user-available space is full. 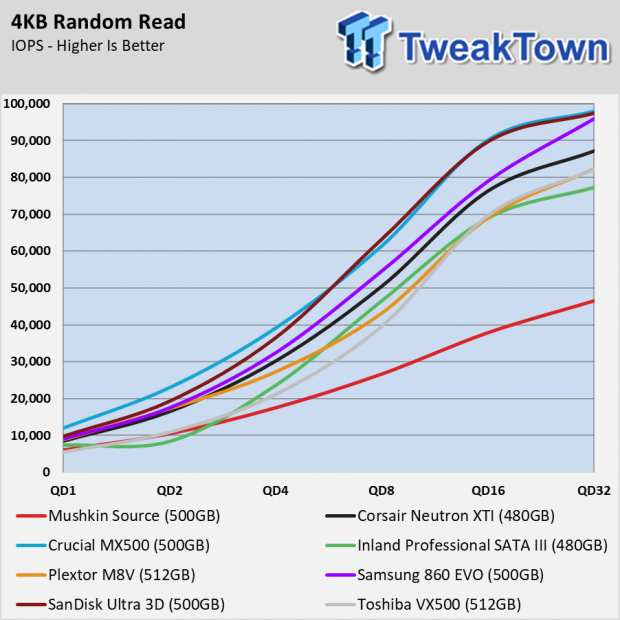 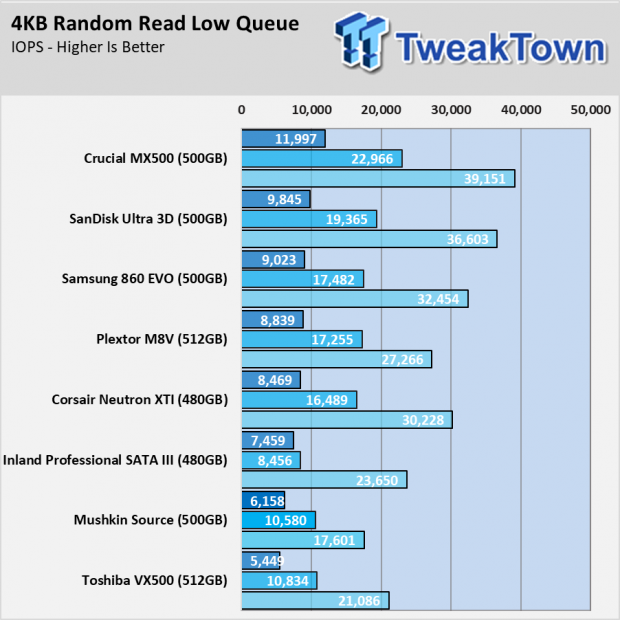 Random read performance is one of the most important areas for Windows users. This is what makes your computer feel "fast" and "snappy". Every drive on these two charts are magnitudes faster than a hard disk drive, but the two DRAMless models are slower than most of the other SSDs. 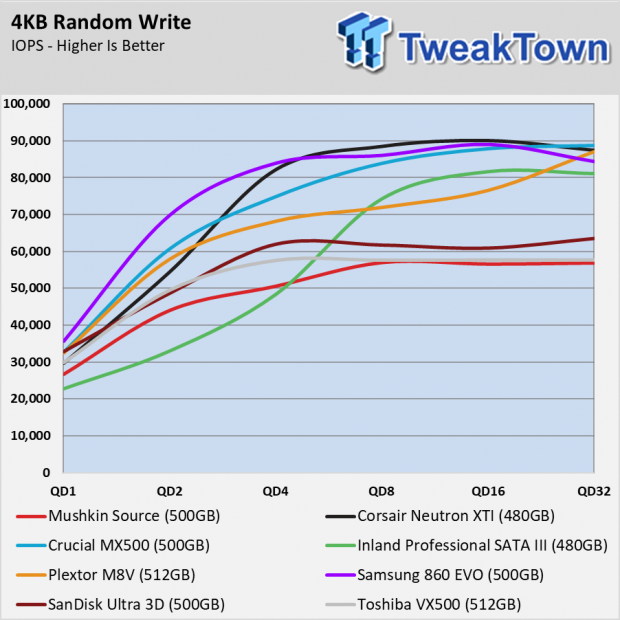 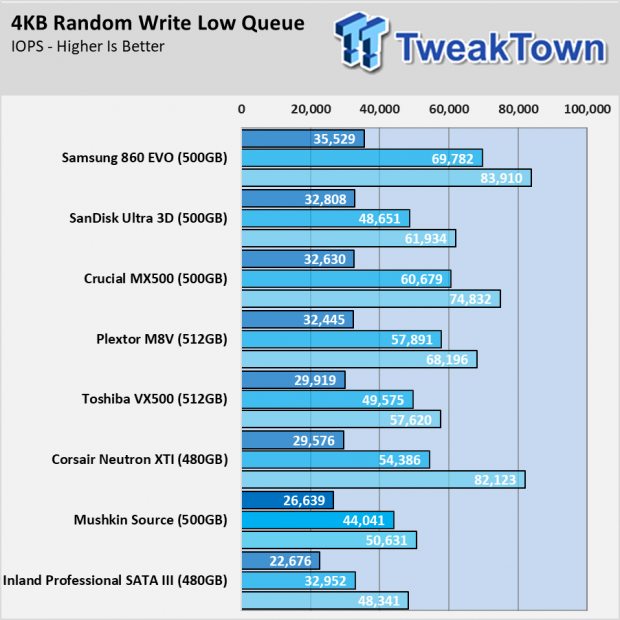 The large SLC buffer helps the 500GB Mushkin Source write random data at high speeds, at least for a short burst. Under desktop workloads, nearly all random writes are simple bursts and the modern SLC buffer architectures are strong enough to absorb the incoming data. 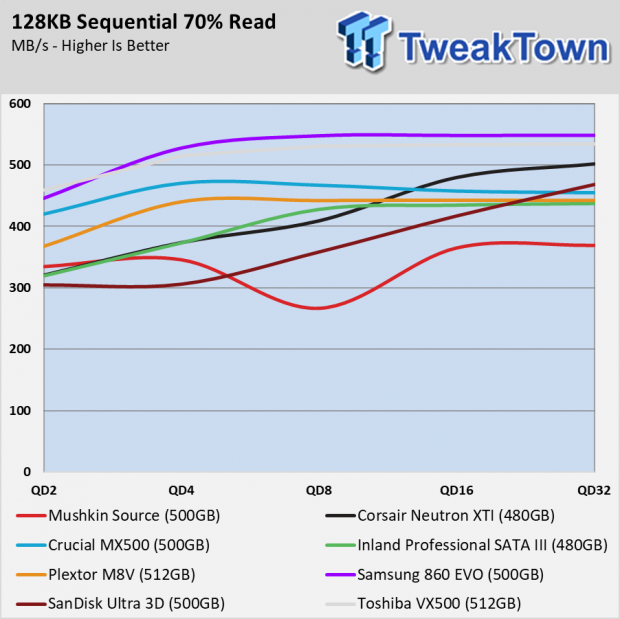 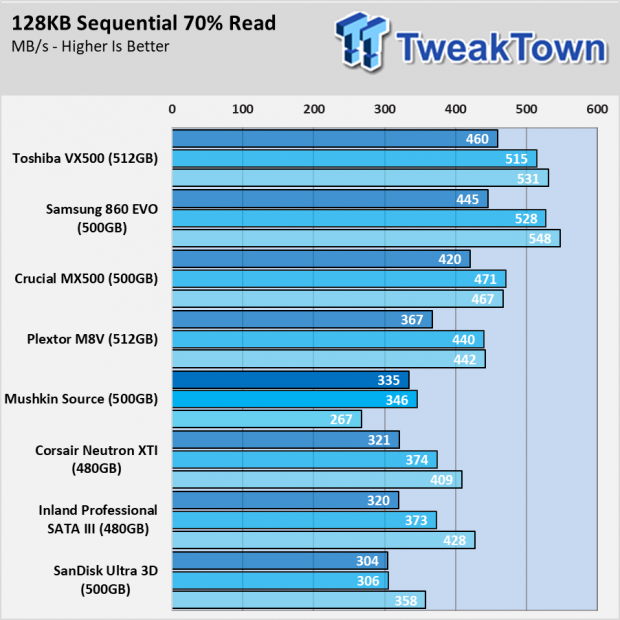 The Mushkin trails the Inland Professional SATA III in our sequential mixed workload test with 70% reads. Both drives start out stronger than the SanDisk Ultra 3D, but all three drives trail many of the mainstream models in our test group by 100 MB/s or more at QD2. 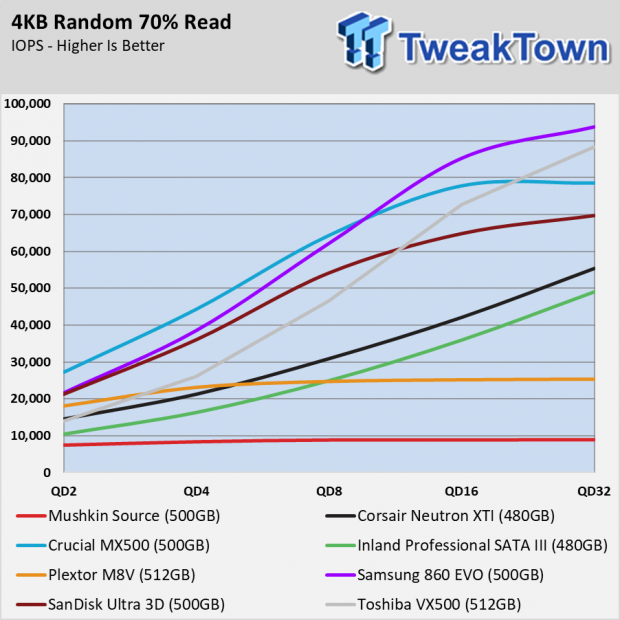 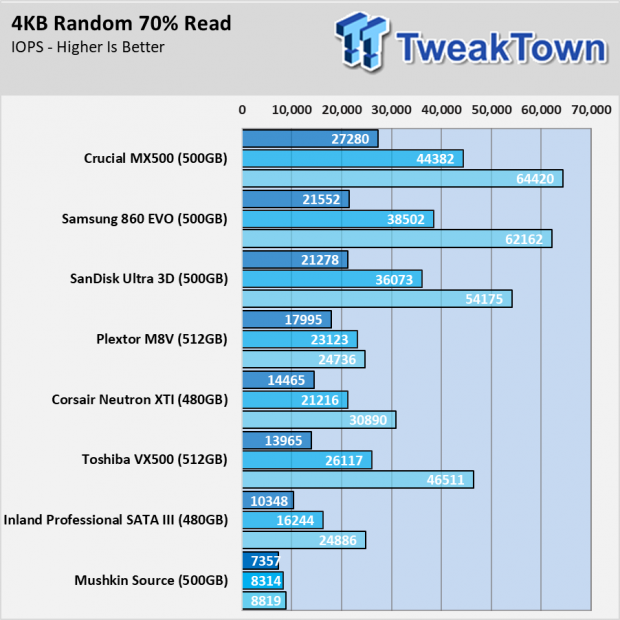 The 500GB Source didn't scale well as we increased the random mixed workload through queue depth. The drive hovered around 8,500 IOPS through the entire test. 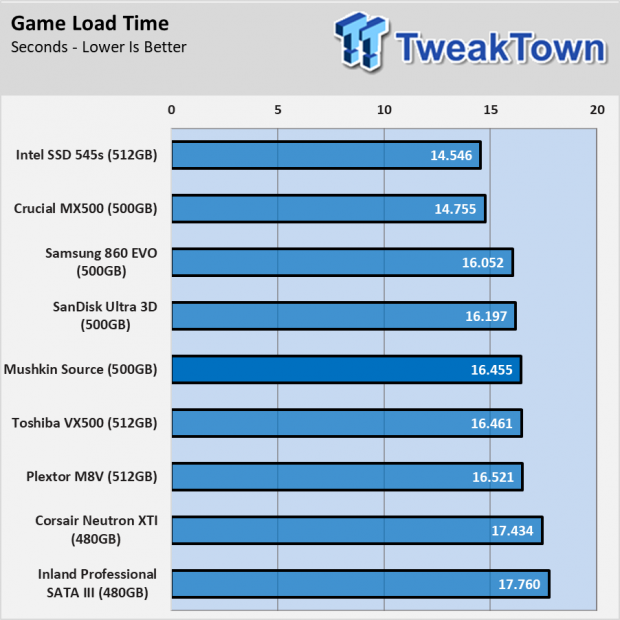 The 500GB Source's strong sequential read performance allows the drive to load Final Fantasy: Stormblood quickly. The drive performed much better than we expected in a real application. 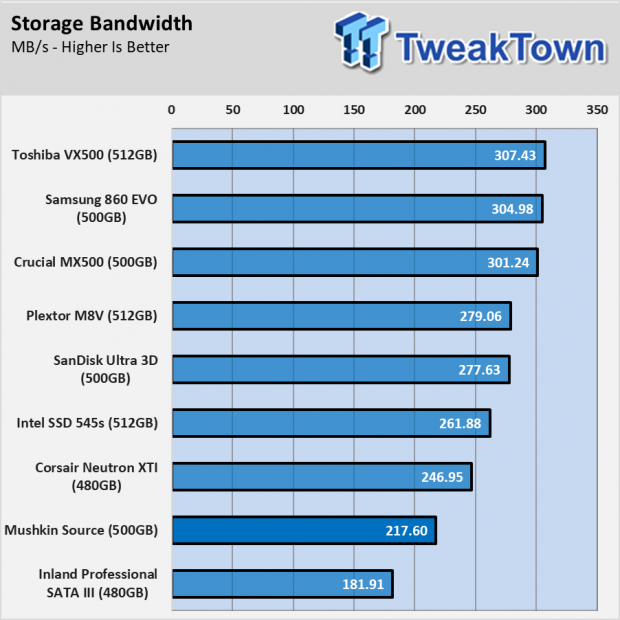 In general, applications that rely more on random read performance, the Mushkin Source falls a few spots. The 500GB drive sits between the Corsair Neutron XTI and Inland Professional SATA III with 217 MB/s, an average score based on results of ten daily use applications. 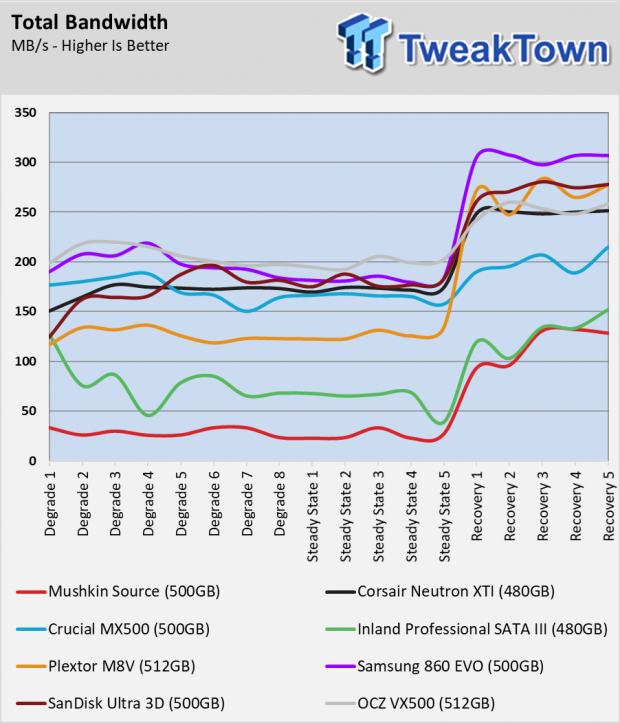 Under an intensive workload, the Mushkin Source falls flat. This is common on DRAMless architectures as the workload is well beyond what most consumer SSD normally must live through. The 500GB Source does recover with idle time, as it should. The performance is still low and the recovery takes longer than many of the other SSDs. 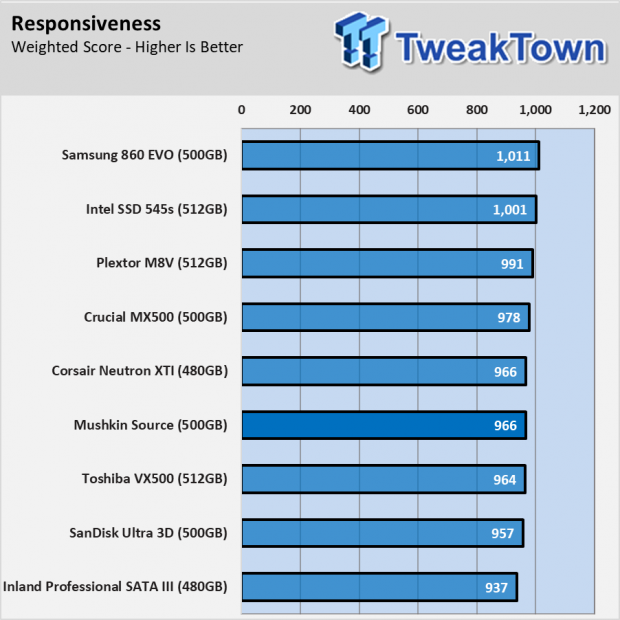 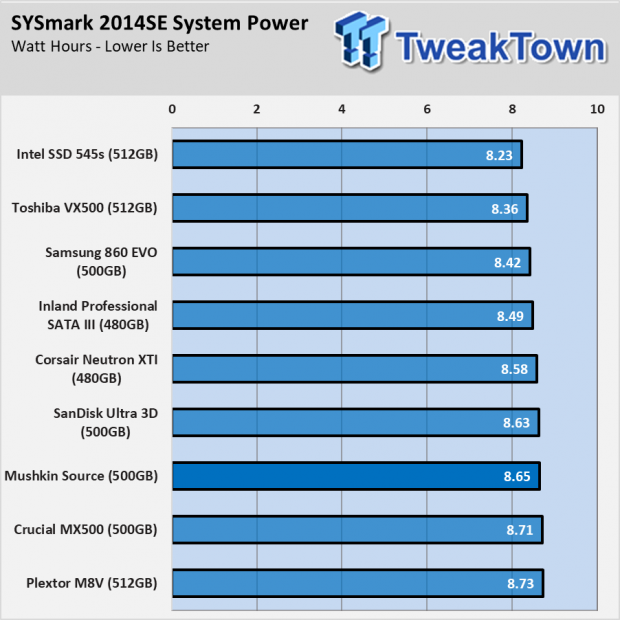 The Mushkin Source 500GB is more responsive over a wide range of applications than the Inland Professional SATA III we tested last week. The drive we tested scored the same as the Corsair Neutron XTI, a premium SATA SSD released in July 2016. 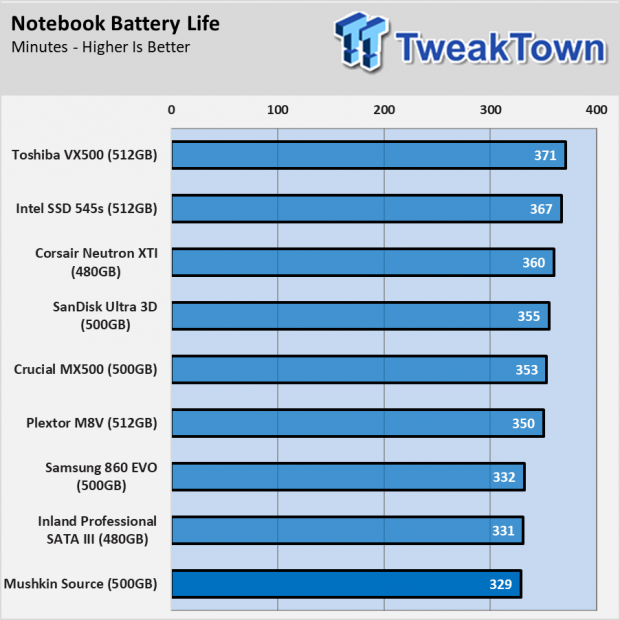 The 500GB Source SSD didn't perform well in our notebook battery life test. When DRAMless SSDs emerged the architecture was advertised as a power-saving feature that would reduce power consumption. At idle and in low power states that is true but without the buffer the drive takes longer to perform background activities such as garbage collection. That offsets the lower idle power savings.

The Mushkin Source is one of the best DRAMless SSDs we've tested. The 500GB size gets close to what companies promised us with the technology several years ago. The drive is fast enough to consider it a mainstream product with enough endurance, and a low price point to make it into the new mainstream-class of products shipping today.

3D NAND has given new life to DRAMless SSDs. These products are not like the previous generation where users would actively watch the amount of data written to the drives due to low endurance from planar TLC. The performance is also much higher than the last generation of DRAMless models. In time, given the high cost of DRAM, these products will make up the mainstream market, or at least make us a sizable portion of it.

Falling flash prices spur companies to widen their product range. Company that spent the last couple of years with one or two SATA SSDs will expand the lineup back to a good, better, best cadence even with new NVMe products also using the same three-tier scheme. The difficult part will be to put enough pricing difference between the models, and that's where the Mushkin Source has an issue.

Amazon currently shows the Source 500GB we tested today at $104.99. That is just $5 less than the Crucial MX500 500GB, one of the best SATA SSDs shipping today. An even bigger issue comes just one tier up, where Mushkin has the premium SM2262 NVMe SSD. The Mushkin Pilot 500GB sells for just $134.99, also at Amazon. We haven't tested this drive but it uses the same hardware configuration as the Adata SX8200 and HP EX920, two of the best values in NVMe SSDs shipping today. The Pilot costs less than both drives and is potentially one of the best NVMe SSD values available today.

On one hand, the Pilot costs around 30% more, but we're only talking about $30. In performance terms, it's like paying just $30 more for an AMG over a base Mercedes instead of twice as much for the supercar experience. If you are not limited to just SATA due to an aging motherboard or lack of M.2 slots, we suggest spending a little more to get the full user experience. The Pilot should deliver a 2x increase in random read performance. It's an upgrade you will notice even if coming from a premium SATA SSD.