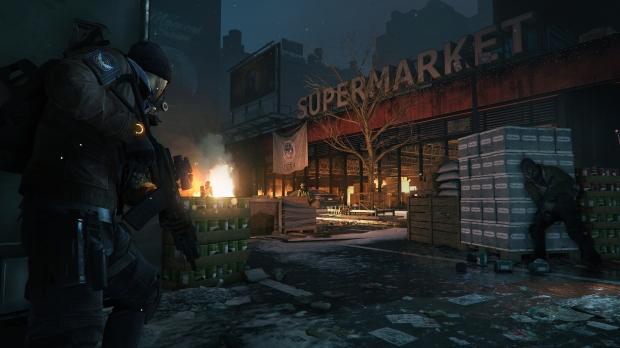 The Division is a long awaited release, one that's surrounded and mired with controversy over the downgraded graphics from the initial trailer. Dynamic weather effects and environments that react to so many different points of data? It was a technological dream come true. But to actually make it playable on real, modern hardware, sacrifices had to be made.

The snow still melts over time, and builds-up, to a degree, in snow-storms. But it's less of a dramatic effect than the initial trailer. Overall, though, it's a good looking and very open game. And it works well. In fact, there are very few issues at the moment. Even the servers are mostly able to handle the amount of traffic that they're being bombarded with.

Ubisoft designed a new engine from the ground up for The Division. Their goal was to be able to create better and more visceral environments, instead of larger ones. More refined textures, better physics, physical based rendering, and even a weather system that can change drastically from one minute to the next. 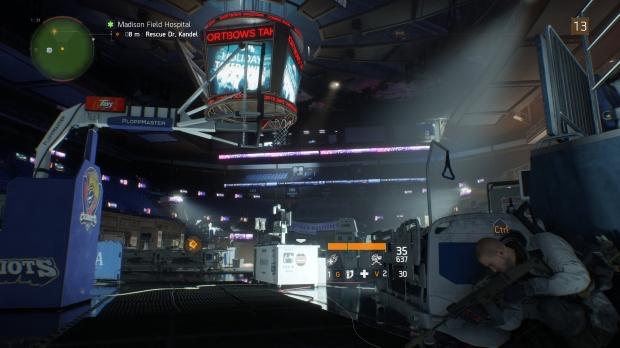 The whole thing is "node-based", meaning everything is potentially interconnected in some underlying way. Also, it's very capable of procedural generation, or in the case that we see here, procedural destruction. Unfortunately, for now, it's only a DirectX 11 based engine, so it can't take advantage of the low-level control offered by DX12 or Vulkan.

Don't forget to bring a towel

The Division has an internal benchmark that goes through some very good scenarios that bring all of the various new technologies into play, but I feel it's best to see what actual gameplay looks like. The problem is that it isn't always repeatable in all cases. That's even true between tests due to the intelligent AI employed here. But it does give an idea of how it plays in a frantic scenario in the game itself.

To test, I played through the first medical mission in Madison State Garden, an easy mission but one that stresses the GPU in all the right ways. Complex interior and exterior areas plus plenty of enemies and projectiles flying around. 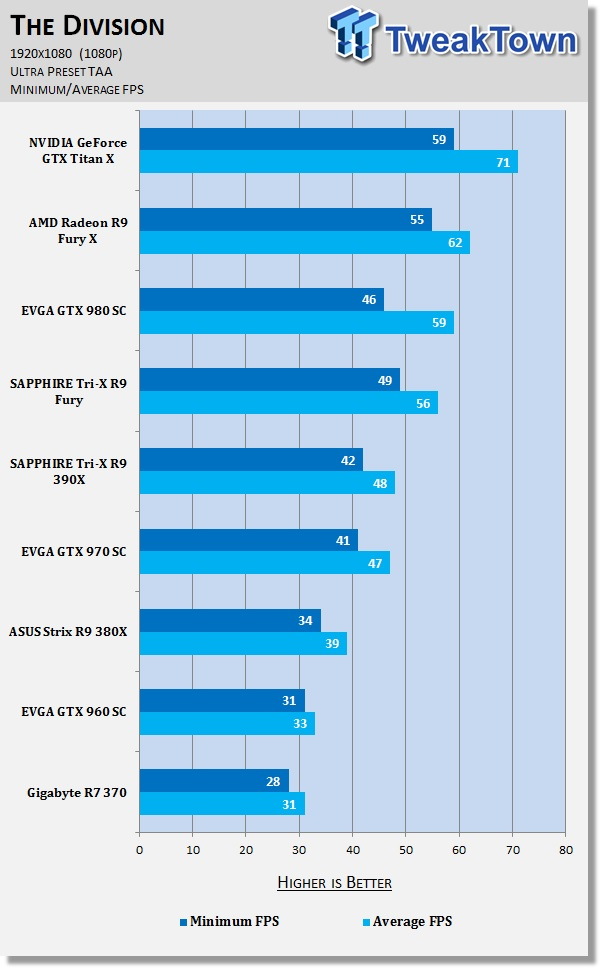 At 1080p, VRAM isn't a limiting factor, and even the GTX 970 with its 3.5GB addressable memory does decently here, but none except the top-end are capable of maintaining a smooth 60FPS experience. In fact, the minimum recommended for 1080p with everything turned on would be either an R9 390X or a GTX 970. Anything below that and you'd have to sacrifice visual quality. 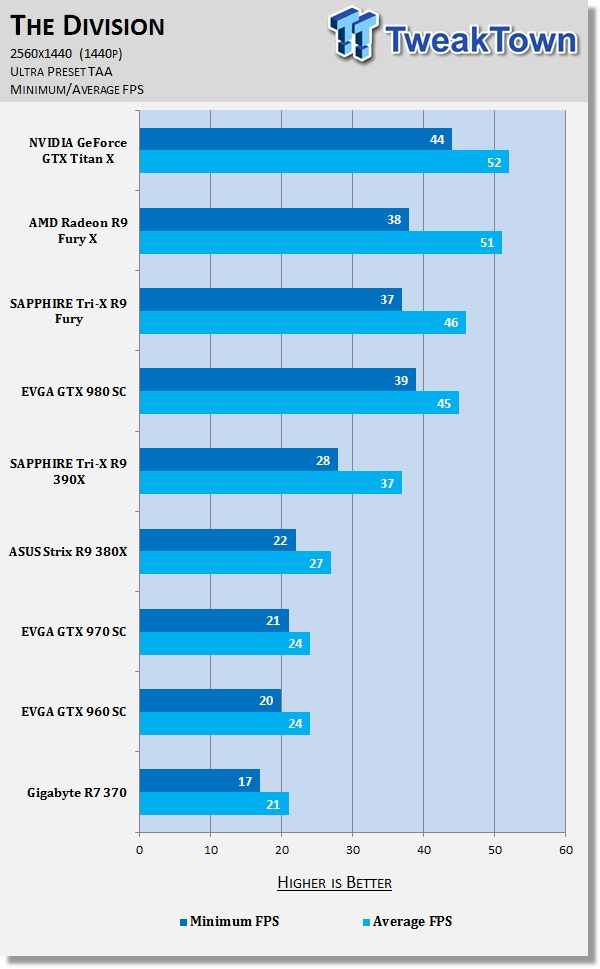 Moving on to 1440p, we start to see that VRAM does indeed matter though it's curious that the 390X is only just barely keeping up with the GTX 980 and its 4GB of VRAM. Though utilization was checked to be at around 90%, it seems that it just isn't quite fast enough, regardless. The Fiji-based cards start to close the margins with the Titan X. 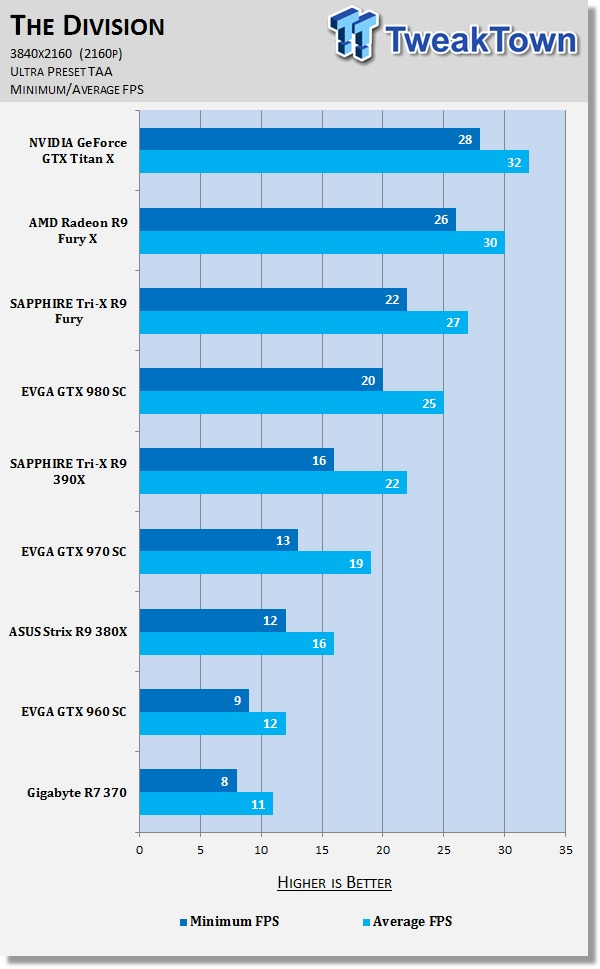 4K is a sight to behold, one that makes you wonder what this would play like if Ubisoft retained the original graphics. I'd imagine very poorly. CrossFire and SLI are a must at this resolution because 30FPS on average just doesn't cut it for an action game of this caliber. There were several dips below 15 that made it terribly difficult to aim, even with a Titan X.

If scaling is good (Anthony will explore that in a future article), then this should be a beautiful game indeed. One could argue against using AA at this high a resolution, which could add another 10% or so on top of the ~30FPS. The Fury X does very well here, playing like a champ with its "limited" 4GB of RAM.

I can only imagine the performance boost DX12 could have with asynchronous shaders being utilized. This seems like it could be a very compute heavy engine, with the physics, environmental effects and a lot that's going on the background to make it look like it does, which would not necessarily work in the favor of NVIDIA, unless CUDA could be made use of with more GameWorks specific effects.

The Division might be one of the better-looking games of our generation that doesn't use DirectX 12. Sure, it's a "downgrade", though the world is almost impeccably rendered with detritus in the streets having substance. The fire, particle effects, physical based rendering, and real-time reflections are all incredibly used here.

The weather is also pretty neat, as you can watch the snow sort of dissolve when the sun is out. No, it's not "melting" in a visual fashion, but it's still pretty neat. And this is just the beginning of what the Snowdrop engine is capable of; it'll continue to evolve and might even include DX12 or Vulkan support in the future.

Be sure to let us know how your system runs both in-game and in the benchmark.