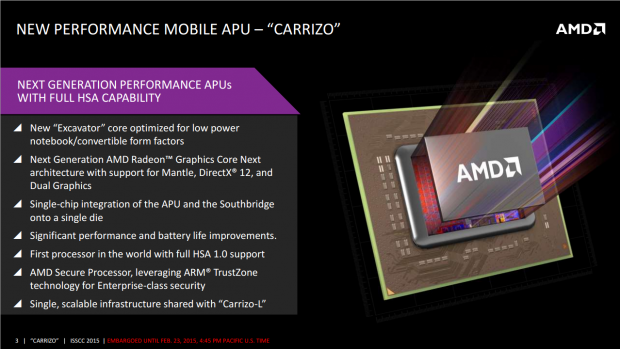 At the International Solid State Circuits Conference (ISSCC), AMD announced their Carrizo mobile APU featuring the new "Excavator core", which is the first processor with full HSA 1.0 support. It will have a GPU that is different from Kaveri. There will also be a Carrizo-L, and they will be pin compatible. The Radeon GPU will be capable of supporting DX12, Mantle, and direct graphics. 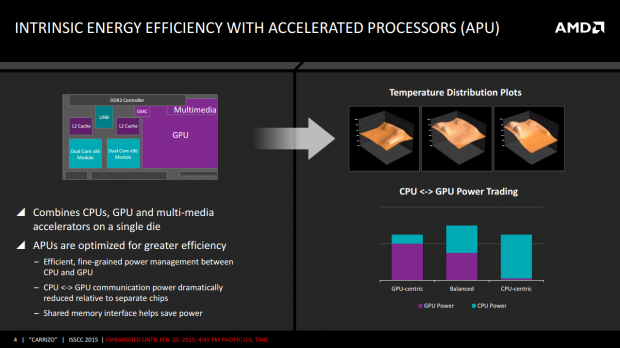 Carrizo will improve on the APU by bringing the southbridge on die and will have the CPU and GPU better communicate and share memory to save power and improve performance. AMD is aiming to increase their performance per watt, something that has become a first priority for many processor manufacturers. 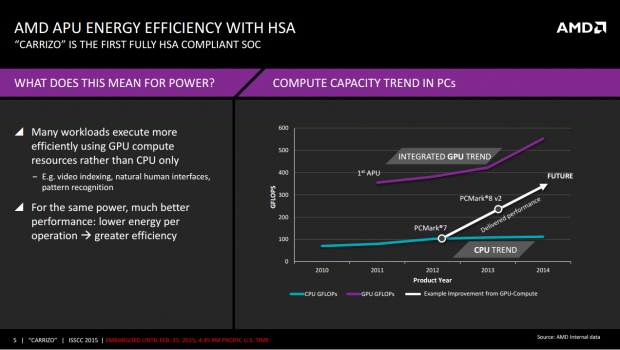 Full HAS 1.0 compliancy means that the GPU will be used more to increase processing efficiency. There are some things that GPUs are better at such as video editing, natural human interface, and pattern recognition. Now the GPU can help the CPU with these tasks. 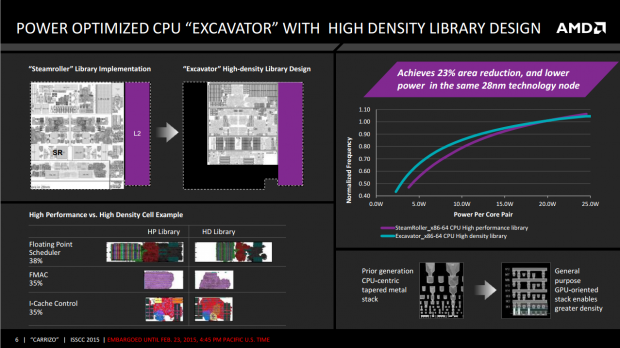 Carrizo will be processed with the 28nm node and AMD has managed a 23% area reduction and they have brought in some of their GPU transistor technology for Carrizo. 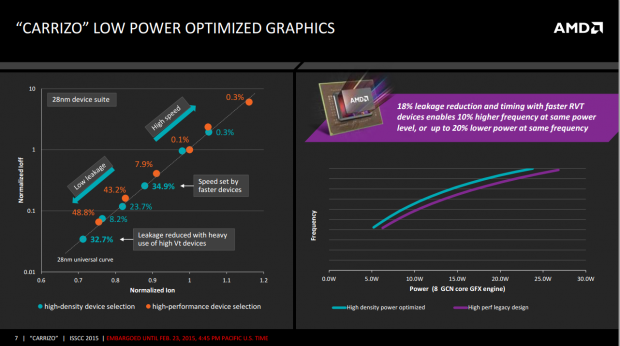 AMD claims 18% leakage reduction, which allows for 10% higher frequency at the same level. AMD said that they went "back to basics" and is shifting to lower leakage APUs. In the graph above, you can see AMD has been able to reduce the leakage, without slowing down the processor. 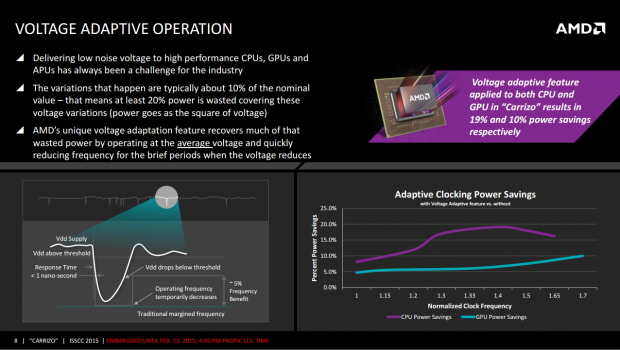 I found AMD's new voltage adaptive operation technology interesting. AMD states that power from the motherboard isn't always the cleanest, so manufacturers add 10% extra voltage to ensure stable operation. However, now the CPU will be able to momentarily drop its frequency if it detects a voltage drop, so AMD can use a lower operating voltage, which reduces power consumption. 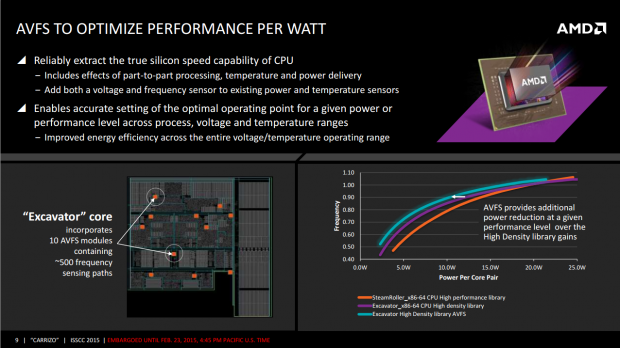 AMD has also added 10 AVFS silicon based sensors for voltage and frequency to accurately determine and engage optimal operating conditions across different parts in the processor. 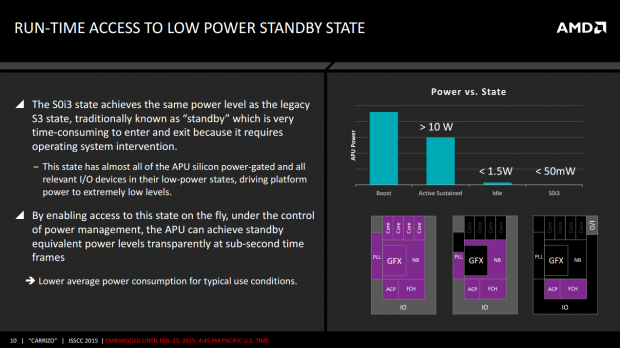 AMD has implemented a new SOi 3 standby state which will be able to turn off IO and the PLL sections which were left powered in previous generations. This should greatly improve battery life for long term deep sleep. 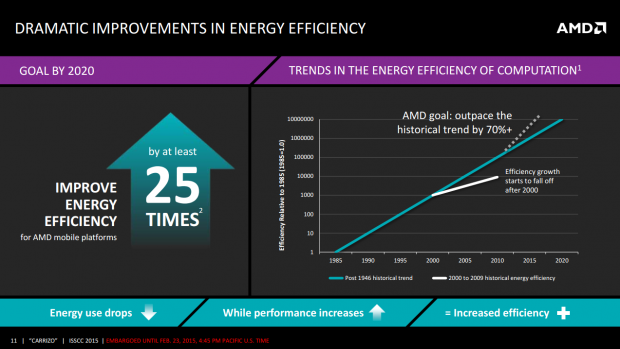 AMD is hoping for huge improvements in power efficiency by at least 25x improvement, while performance increases, all by 2020. 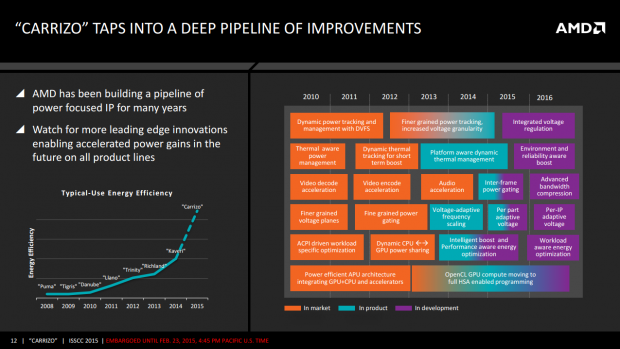 AMD's roadmap of features is quite interesting, it seems like they are going to integrate a voltage regulator into the CPU, this should help reduce mobile per consumption. 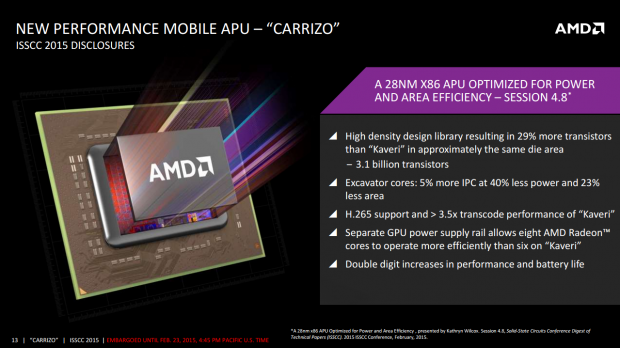