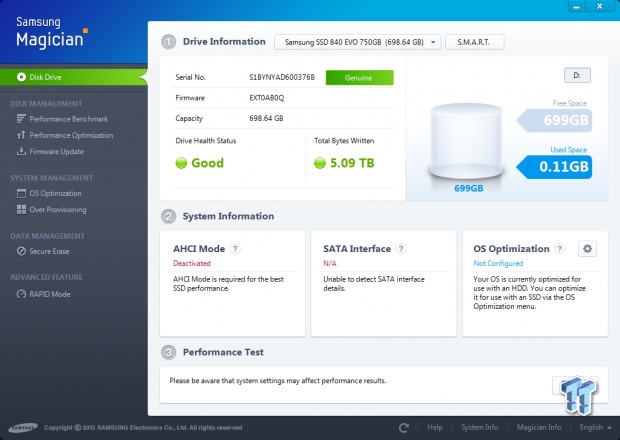 At first I was surprised at the number of questions that came in about Samsung's new Magician software, but after remembering that Rapid Mode is tied to the software, it all made sense. We've covered Intel's SSD Toolbox and Corsair's new SSD Toolbox, but neither brought much of a reaction when we covered the software or when we didn't talk much about it in each company's SSD product reviews. Magician on the other hand is like a product of its own with the feedback we received. I think part of this reaction has to do with Magician 4.2 not available for download yet.

The Samsung Magician software is designed to help users easily manage the health and performance of their Samsung SSD. In addition to providing vital SSD health status information, Magician will assist users in updating firmware, measuring performance, and optimizing the configuration of a Windows operating system installation. Samsung Magician software is developed and distributed exclusively for owners of Samsung Solid Sate Drives (SSDs).

Magician 4.1 hit Samsung's website recently and included new supported languages, a new OS Optimization tab and a handful of bug fixes. For the purpose of reviewing the new Samsung 840 EVO, reviewers were granted early access to the newest version that adds support for Rapid Mode. Rapid Mode is a software technology developed by NVELO. Most know of NVELO from their Dataplex Software that many SSD manufacturers packaged with highly overprovisioned LSI SandForce SSDs for HDD cache products.

After taking a deep dive into Samsung's Magician software, we found one issue of interest that affects a small number of our readers. Magician has an issue with AMD hardware even when running Microsoft's AHCI driver. Older NVIIDA chipsets for AMD hardware are not affected, but newer AMD chipsets are not supported.

Let's walk through Magician 4.2 and see what this early sample has to offer.

Magician software ships with Samsung SSDs on a CD, but the latest version is available at http://www.samsung.com/samsungssd. On the same page you will also find Samsung's Data Migration Software and firmware updates for Samsung SSDs.

Magician runs in the system tray and you can find the icon in the lower right corner of your Windows screen. By default, the software starts when you turn your computer on, and it does take a small amount of system resources to operate. 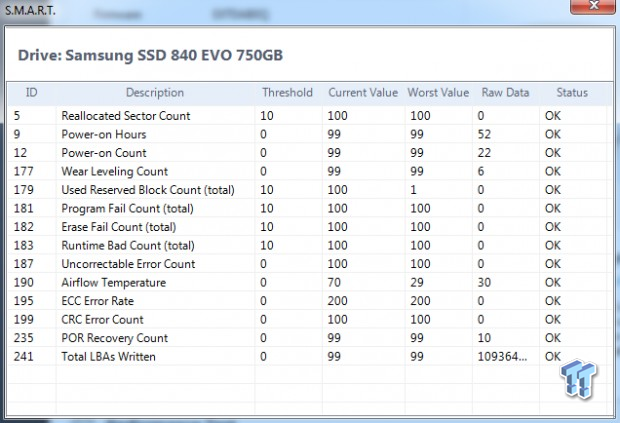 The SMART button at the top gives us easy access to data polled directly from the SSD. 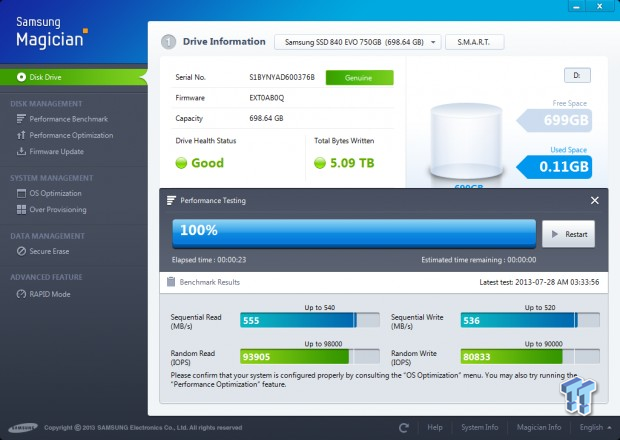 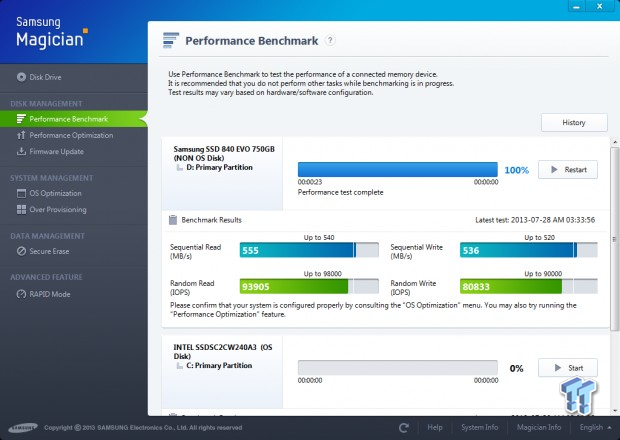 The Performance Benchmark also has its own page in the software. On this tab you can test other SSDs not manufactured by Samsung. This is an easy way to get a quick comparison of your installed storage products, even HDDs. 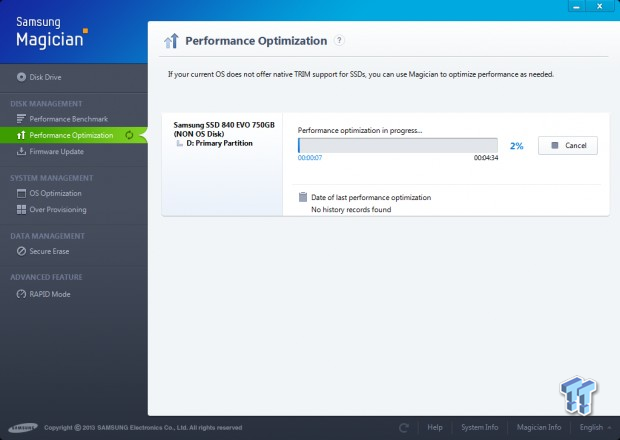 The feature fills your Samsung SSD with large sequential temporary files and then deletes them. This starts a chain reaction with the operating system, TRIM kicks in and your spare area gets a nice cleaning. Your existing data is safe since the software only fills free space. This does mean you write a lot of data to the drive and thus you're wearing through the P/E cycles. 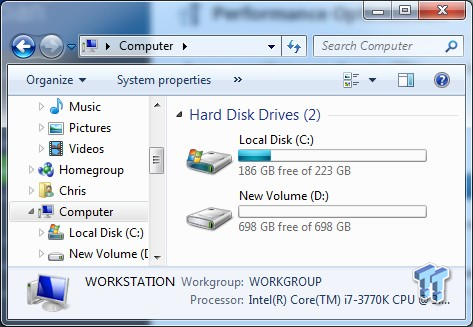 When the files delete, your original data remains, and so does the amount of space you had before starting the operation. 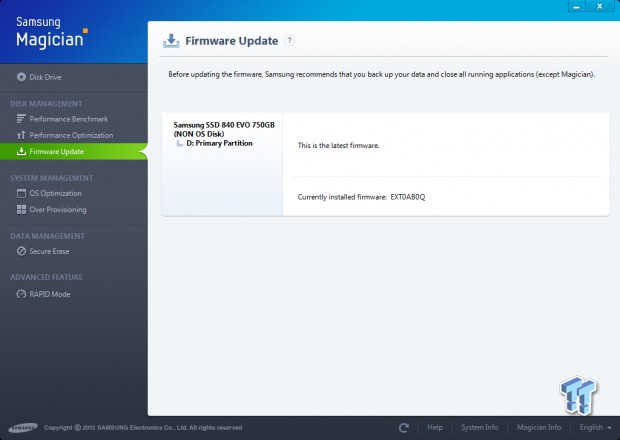 The last tab in the Disk Management section of Magician 4.2 checks your current firmware against a database on Samsung's servers. If your firmware is out of date, you can update the firmware from within Magician with ease. 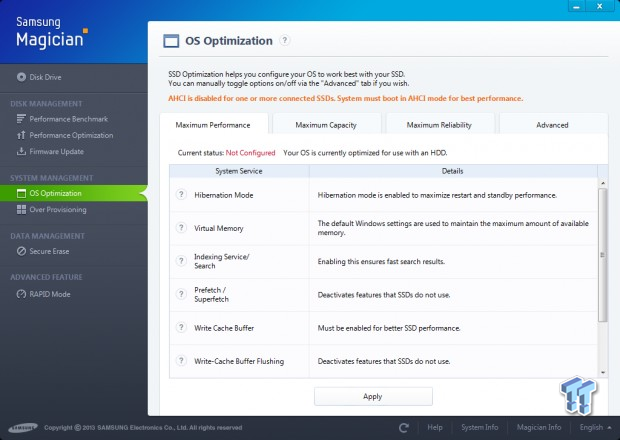 There are four tabs in the OS Optimization area of Magician 4.2. The first is for Maximum performance. In each tab a number of Windows settings are changed with one click of the button. 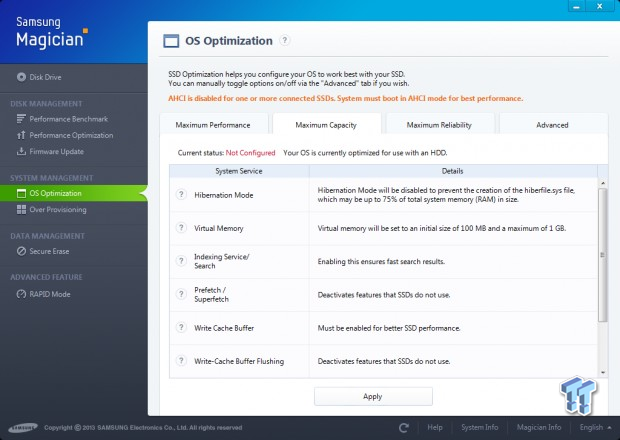 The Maximum Capacity settings are nearly identical to the Maximum Performance, but the hibernation and virtual memory settings are in line with Windows default settings. 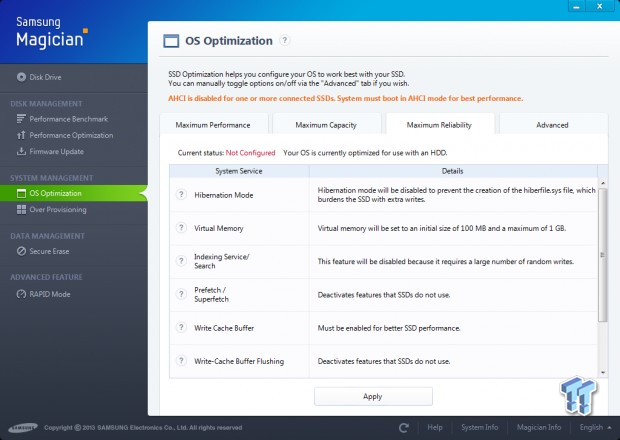 The Maximum Reliability setting reduces disk the number of writes to the SSD by disabling or reducing the settings of built in Windows features. 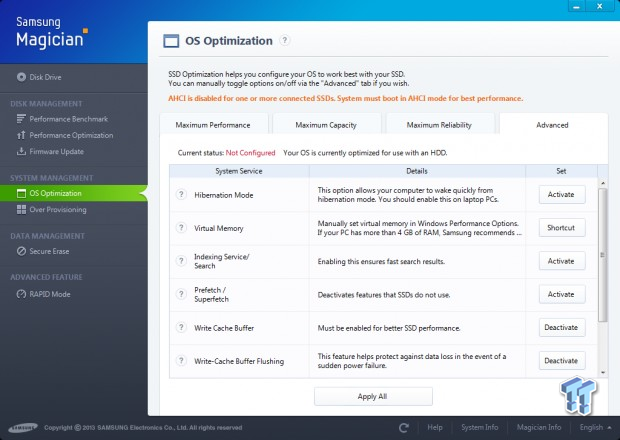 The Advanced settings lets you pick and choose the settings you want to enable or disable. 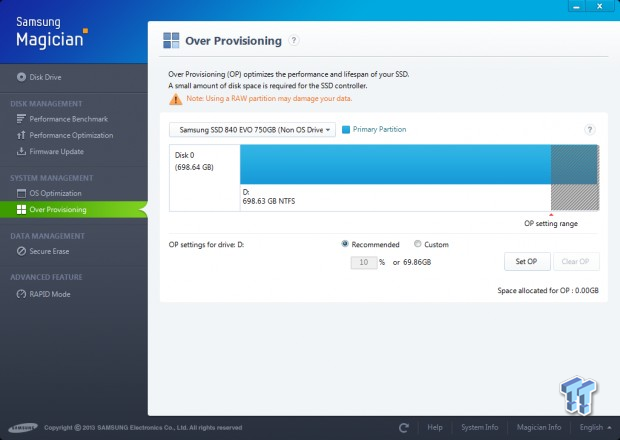 The Over Provisioning tab allows you to quickly and easily set reserved area on your Samsung SSD. The software recommends 10%. 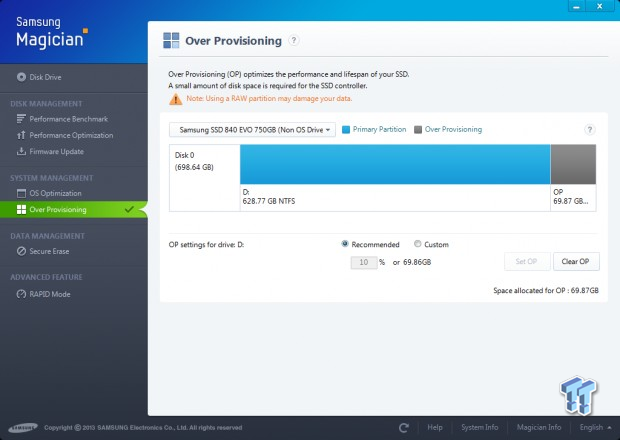 If you run your SSD with a lot of data on the drive this is a good setting to use since it will increase performance and the life of your SSD. 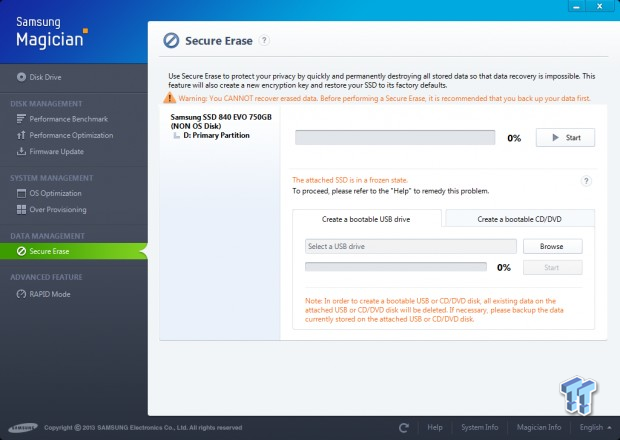 From time to time it's just better to clean everything off of the table and to start over with a fresh surface - and it's the same with SSDs. The Secure Erase feature sends voltage to the SSD which deletes all of the data and puts the drive back in a fresh out of box state.

You cannot secure erase a drive if the operating system is on it from within Windows. To make life easier Samsung has also added a utility that will build a bootable partition on a flash drive and load a secure erase software tool. You simply reboot the system with the thumb drive still plugged in and set that device in the BIOS to boot to. The software will secure erase your drive, taking everything off of it including your Windows installation and data. So, remember to backup all your data. 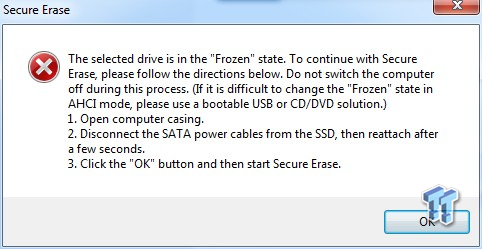 As a SSD reviewer, I secure erase a lot of SSDs. In my experience with testing Magician's SE tool, I found it easier to erase a drive with Intel's RAID setting over Intel's AHCI setting. 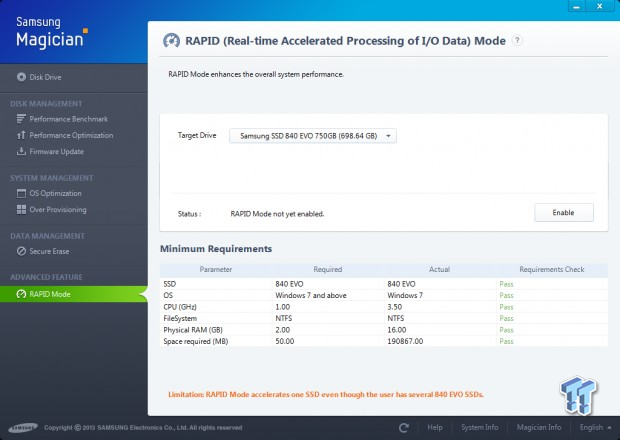 The newest tab inside Magician is the one everyone is talking about, Rapid Mode. The version of Magician 4.2 reviewers tested only works with the new Samsung 840 EVO. We tried Rapid Model with an 840 and 840 PRO, but the software did not pass the recommended requirements test.

Samsung stated at the 2013 SSD Global Summit that the 840 PRO would be eligible for Rapid Mode, but didn't say if the 840 would be omitted from eligibility. There isn't anything technically limiting Rapid from working with the 840 or any other SSD for that matter, other than settings.

I honestly wouldn't be surprised to see someone hacking the software or the system registry to get Rapid working on other SSDs as well. 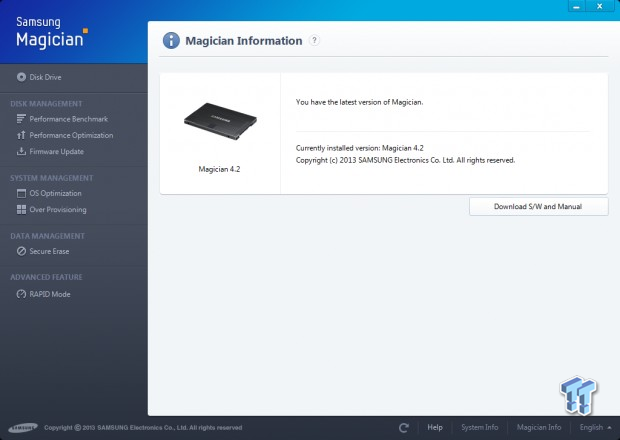 This is the first time we've written a deep dive on Samsung's Magician software, although we covered it in our 840 PRO reviews around a year ago. The software is progressing nicely, something we like seeing with products included as accessories with SSD purchases.

At this time, only a very small number of companies include software tools with consumer SSDs and I feel the inclusion of such a useful feature really will drive our readers to certain brands. Corsair, Intel and Samsung has the most robust packages on the consumer side and the Intel and Samsung software packages even work with the company's enterprise SSDs.

As the tab for Rapid Mode notes, Samsung is moving beyond the intended purpose of such software and is adding in advanced features. Adding Rapid Mode is a big feature and it will increase the number of users installing Magician on their PCs. This is a software step forward for consumer SSDs and it comes at a time when the hardware, mainly the NAND flash, is taking a step back in both latency and endurance. To continue to move forward, software solutions are needed to overcome hardware problems. Samsung has their quicker-fixer-upper ready to go, but we can't say that about other SSD manufacturers at this stage.

Look for Samsung to release Magician 4.2 in the coming days when e-tails ship the new Samsung 840 EVO SSDs.