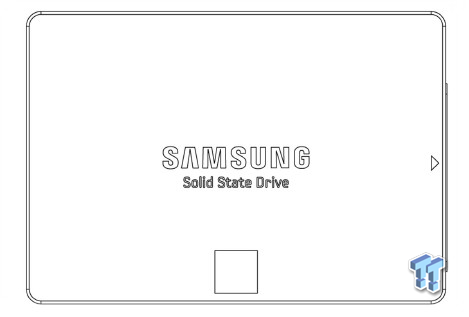 Last week Samsung held their 2013 SSD Global Summit and invited roughly 150 technology journalists along for the ride. We posted several videos from the conference in our news, but we couldn't publish everything. Although several new products were on display, many from the enterprise side, the new 840 EVO was the main attraction.

The Samsung 840 EVO is the successor to the original 840 SSD, the world's first retail SSD to use TLC (triple-level cell) NAND flash. At the time of writing, the EVO model sits between the original 840 and 840 Pro. Armed with a new controller that's 100MHz faster than that of the 840, the EVO is a faster product that also utilizes new second-generation TLC NAND flash, now at 19nm.

One of the hottest topics at the conference didn't actually come from the hardware solution, but rather a software focused topic from Samsung's recent acquisition of NVELO. Built into the Magician suite, RAPID Mode adds another layer of system cache, much like Superfetch to the storage system. When enabled, RAPID will utilize up to 1GB of system memory for a tier 0 like read and write cache. There are several performance benefits to using DRAM for storage cache, but there is also a possibility of losing data due to the volatile nature of DRAM.

Let's take a deep dive into the Samsung 840 EVO architecture and features and then later in the day look at the actual reviews.

At this time, the 840 EVO is a unique product thanks to the software layer. We suspect over time more companies will use DRAM to cache the storage system reads and writes, as well as take in all of the random reads and then output the data as sequential writes to the drive. This isn't anything new, we've seen the technology used on the enterprise side for some time now. It does make it difficult to show a list of specifications like the one below since your existing components play a role in determining perceived performance and benchmark results. 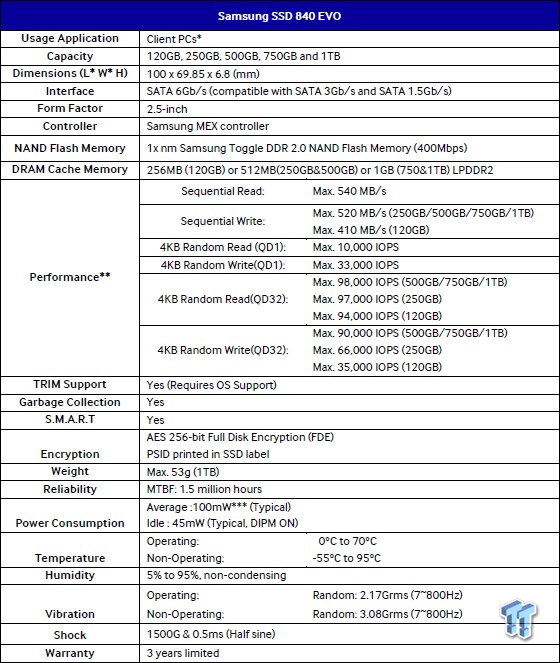 At the heart of the 840 EVO is a new controller, MEX. This is another tri-core controller like what Samsung used on the 840 and 840 Pro. We like to say one core is dedicated to readings, one to writing and one to arithmetic since each core has a separate function, the last, arithmetic part, refers to background activities, such as garbage collection. The MEX is 100MHz faster than the controller found in the 840.

Along with the new controller is support for AES-256 bit encryption. The 840 EVO supports eDRIVE, part of Windows 8 BitLocker and TCG Opal.

Samsung used new 19nm TLC NAND flash. This is second generation TLC for Samsung, the density has increased per die, while the lithography has shrunk. With those come a few concerns, mainly lower interleaving between die, a performance constraint on smaller capacity size SSDs.

Even though the Samsung 840 EVO has less interleaving between flash, compared to 840 products of the same capacity size, Samsung managed to increase performance. A pseudo-layer of SLC on each die, similar to SanDisk's nCACHE, increases write performance significantly. We'll talk more about the different cache layers on the next page. 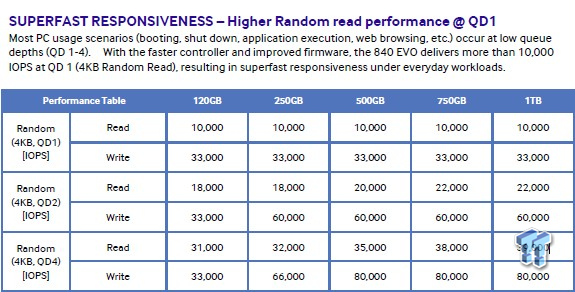 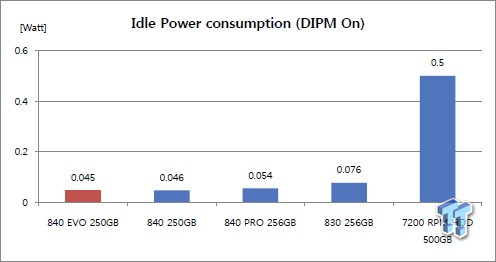 We never inquired about the techniques Samsung used to further reduce power consumption, but we suspect the new flash and refinements to the tri-core controller are responsible. The data provided represents the SSD alone and not the overall system power. In our testing with RAPID enabled, we found that battery life reduced due to DRAM using more power than NAND. The 840 EVO on its own though does use less power than the previous generation 840 and flagship 840 Pro.

Layers and Layers of Cache and RAPID Mode

Layers and Layers of Cache

We've spoken extensively over the last several months about the latency issues Micron has with new 128Gb flash that came to market with the new 20nm process. Samsung wasn't immune to increased latency at 128Gb and like Micron, the second generation 19nm flash has latency spikes that reach into the 1ms range. To help elevate latency when writing data to the drive, Samsung implemented two new technologies. 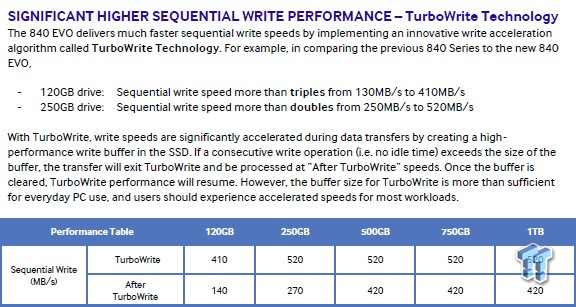 On the drive, Samsung implemented TurboWrite, a designated area on each flash die that works in SLC mode. By writing only one bit to each cell with a predefined space limit, Samsung increased performance on the flash itself, which in turn makes for a low cost, non-volatile cache built into the SSD.

The capacity of TurboWrite space varies between each capacity size (charted above). Data writes to the pseudo-SLC layer first and later pushed to the TLC portion of the flash. Extremely large writes will fill the pseudo-SLC layer and at that point, performance moves to TLC levels. In our full disk span tests, we observed both SLC and TLC performance, but the SLC area is so large that most end users will never (or at least rarely) experience TLC-like performance.

Since only one third of the flash capacity for the cell is used, the 12GB SLC like area actually uses 36GB of TLC flash, using the 1TB model as an example. For the last two plus years we've talked about buying more SSD capacity than you need because drives get slower as you increase the amount of data on the flash. With the 840 EVO, the distance between good performance and worst case scenario is large, so you really do need to purchase a larger drive or work at keeping the volume of data on the drive down.

To put it bluntly, RAPID Mode changes everything. That doesn't mean the software is best used by everyone or in every environment, but a majority of consumers will benefit from the technology. RAPID software essentially increases the user experience by increasing the perceived performance level of the SSD. With the 840 EVO, performance virtually doubles for a period of time. That period of time is determined by how fast your DRAM is, 1333MHz DRAM will have a longer duration or performance increase time than 2400MHz DRAM because the limiting factor is capacity and not speed. When flushing the data from the cache to the SSD, the SSD is the bottleneck, so regardless of how fast your DRAM is, the flush takes place at the speed of the drive.

First included in Samsung's Magician 4.2 software, RAPID uses up to 25% of your DRAM, but is limited to just 1GB of capacity. I think nearly everyone reading TweakTown has 4GB or more of system memory, so the 1GB rule applies almost universally. Sadly, end users cannot change the amount of DRAM used by RAPID. Those with only 4GB of system RAM may not want to dedicate 25% to RAPID and those with 16GB or 32GB (hurray for two years of low cost DDR3!) of DRAM may benefit from more resources dedicated to the technology.

There is a dark side to using DRAM black magic to cache data reads and writes to and from the SSD - host power failure. Although RAPID doesn't permanently store data in volatile DRAM, data does reside there for a short period. The side I would be worried about is data written to the DRAM and for how long that data sits there before flushing it to the SSD. Any power lose for the system with data in route to the TLC portion of the NAND could mean data loss and for some users that just isn't acceptable.

Before we get into the pricing, we have to talk about kit options. It's like when you buy a car, you are asked, "do you want the leather care package for an extra $329.99, we can roll that into the financing?" There are five capacity sizes and all five are available as bare drives. The 250GB and 500GB also come in a notebook upgrade kit. The 120GB and 250GB come in a desktop upgrade kit. The 250GB capacity size is the only model available in all three configurations. In the reviews, we'll show the kit accessories, but we'll discuss them here.

Regardless of the SLU purchased, all of the capacity sizes ship with Samsung's Magician software and the software includes a host of tools for optimizing the performance of the SSD and Windows.

Samsung ships the 840 EVO with a three year warranty. 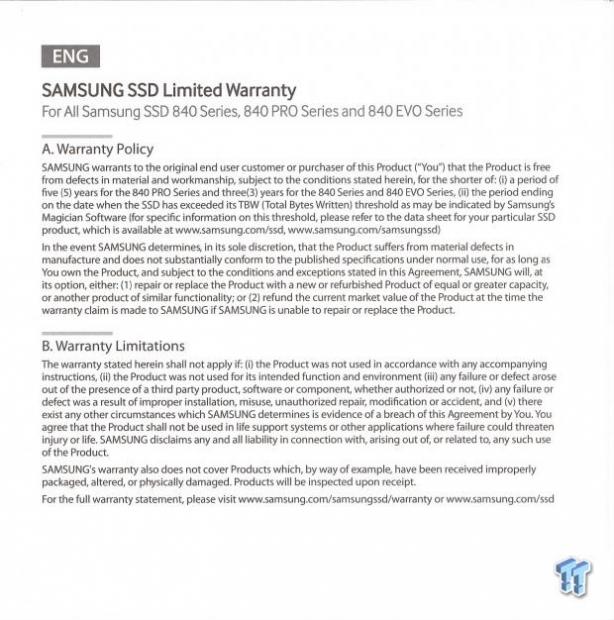 While the statement above may work for some reviewers, there are times when I just can't help myself. The image above is of the English section of the Samsung 840 EVO warranty paper. The Limited Warranty talks about a TBW or Total Bytes Written threshold and states to visit Samsung.com/SSD or Samsung.com/samsungssd. We've visited both of those sites and not found any value related to TBW. At /samsungssd, we did find a warranty statement, much like the one we scanned above. In that statement, it pointed us back to /samsungssd. From there we were lost in Samsung.com land searching for any value associated with TBW.

I have yet to hear about Samsung denying any warranty claims with anything other than a replacement drive. Still, there is a TBW issue lingering overhead and the possibility of a "current market value", most likely as determined by Samsung's refund policy.

On the surface, the Samsung 840 EVO is another value SSD designed for the price conscious consumer in an attempt to gain market share through a high adaption rate. Once you get past the layers of cache, the 840 EVO isn't much better, in fact it could perform worse than the original TLC 840. Then there is the rest of the story, the cache layers. Under normal consumer, prosumer and even power user workloads, you will not write data to the SSD outside of the cache. We can do it with video editing software, while working with large videos, but outside of that, the buffer works and performance stays high. The technology is actually quite impressive when you understand the underlying bits and pieces.

Anytime we talk about cache, though, we really need to take a good look at what type of cache and figure out if the risk outweighs the reward. I wouldn't want to use RAPID on a leaned out overclock that's hanging on by a sliver of headroom. That's what the 840 Pro is for anyhow.

For the average person, the 840 EVO offers everything you want, at a good price point and with more than enough performance to get the job done. If you have an older notebook or desktop running SATA II or even something like the Lenovo T61p that uses SATA 1.5 specs, the EVO is your best choice for doubling or even quadrupling storage performance thanks to the cache layers.

The performance that you'll see in the full reviews will have enthusiasts making notes for Santa, especially the larger capacity size models. For enthusiasts, Samsung should really have called this product the REVO because the cache option is more of a revolution than just an evolution. It's almost as if Samsung had EVO planned and then the folks at NVELO chimed in and said, "let's just make it groundbreaking."

Later today we'll have two 840 EVO SSD reviews posted on TweakTown. The first is the smaller capacity size, 250GB and later in the day we'll publish the 750GB. Over the coming weeks we plan to review all of the capacity sizes including the massive 1TB model and compare it against the Crucial M500 960GB and MyDigitalSSD BP4 960GB.