We don't want to get into too much detail on the new G.Skill kit we're looking at today because for starters it's not yet released and it's being tested on an yet to be released platform. So like our other Ivy Bridge content, treat this as a preview.

If you haven't yet looked at our other Ivy Bridge content, though, I'd recommend you head on over to our Core i5 3570k preview and the higher end Core i7 3770k Preview. Of course, we do need to have a bit of a closer look with what exactly we're dealing with so let's quickly go over the kit of RAM we're using today.

Being such a high-end kit means that it comes as no surprise that the one we're looking at today falls under the latest RipjawsZ tag which has impressed us immensely in the past. The black and blue combination looks so sweet and the black PCB has always a personal favourite of mine. 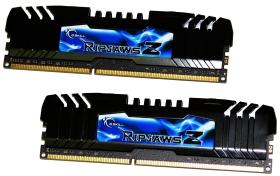 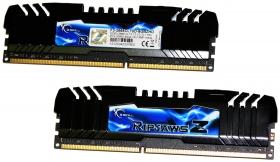 As for the overall look, there's nothing too out of the ordinary as we've seen the RipjawsZ series in the past. We've got the logo, same heatsink design and one side offers us a sticker that gives us some more information with what's going on with the kit.

Moving in closer you can see we're dealing with a 2666MHz DDR kit which translates into a whopping PC3-20800. The timings come in at quite a relaxed CL10-12-12-31 @ 1.65v and what really stands out is the fact we're dealing with an 8GB kit via two 4GB modules and not a 4GB kit. It's not uncommon for these really high-end memory kits to come in at a smaller size helping keep clocks as high as possible.

Before we get into getting the kit up and running we've got to quickly some of the more major details of our testbed. On the motherboard side of things we're using the brand new GIGABYTE Z77X-UD5H. As for the CPUs, we've got both the Intel Core i5 3570k and higher end Core i7 3770k Ivy Bridge based parts. We've got our fingers crossed we've got everything we need to hit that 2666MHz DDR memory clock.

Unfortunately off the bat we didn't. We found that our i7 3770k was capping out around the 2600MHz DDR mark, a little shy of the default 2666MHz DDR. Fortunately being based out of Taiwan and creating a vast network of people we managed to hunt down a Ivy Bridge 3770k from someone and sliding it into our testbed we had that running 2666MHz DDR straight away.

We finally got up and running and into Windows at stock speeds. You can see our CPU-Z validation here. Up and running in Windows it was time to check out the performance we could get.

This gives you a good idea of the extra bandwidth that is offered from the higher clocked memory. As always, though, the next thing we wanted to do was find out what kind of overclock we could achieve. We've heard that this latest kit from G.Skill is capable of 2800MHz 11-13-13-35 @ 1.8v.

Unfortunately this wasn't going to happen for us. Moving to the 28x multi for RAM saw the system not boot and our 3770k didn't want to play nice with BCLK overclocking. We ended up getting into Windows with a 100.5 BCLK, but with it being such a small difference, it just wasn't worth testing.

With no extra MHz coming out of the RAM we headed back into BIOS and took the time to adjust the CPU multiplier. We ended up at 48x which bought our CPU up to 4.8GHz which we knew would help boost overall memory bandwidth. You can see our CPU-Z validation here. Up and running in Windows it was time to check out the performance we could get.

While the RAM is running at the same speed the extra MHz on the CPU helps give our kit a bit more breathing room and overall helps just boost performance across the board. We really thought that was going to be the end of our testing. Because testing is so crazy at the moment, this RAM testing was done in between our overclocking testing of the new Ivy Bridge processors.

What that means is that we threw our i5 3750k into the system before we had finished writing this up and started doing the overclocking testing on that processor. While the OC on the CPU wasn't as strong, what we did find is that it responded to BCLK adjustment a lot better. That meant that we would have the ability to fine tune our memory clock slightly more. Of course that was going to be only half the battle. Not only did we want the ability to fine tune our memory speed with the help of some BCLK adjustment, we needed the CPU to also have a really strong IMC or Integrated Memory Controller in our CPU.

Well... it did! Not only did we manage to get a massive, massive, 2801MHz DDR, but we did it with a CL10-12-12-31 setup with a 1T Command Rate using 1.8v. This is some huge MHz on offer from the kit. You can see our CPU-Z validation here. Up and running in Windows it was time to check out the performance we could get. 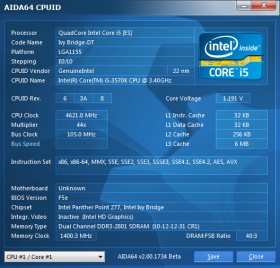 This is some strong performance, but because it's being done on the i5 3570k at 4.62GHz, a slightly lower clock speed then the 3770k which was at 4.8GHz, we can see that overall performance is a little behind the previous results we looked at.

Still, we figured we'd go on a bit of a suicide run to see just what we could get out of the CPU with our RAM clocked at 2801MHz DDR and we ended up in Windows with a 45x multiplier and 105 BCLK.

This as you can see above resulted with a final clock of 4.73GHz under Windows. Still a little shy of the 4.8GHz on the 3770K, but a nice little jump over the 4.62GHz clock. Leaving the RAM and all the timings alone you can see below the performance. 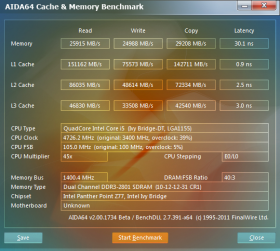 Improvements in all areas compared to the previous test and slightly better performance in the write department when compared to the slightly higher clocked i7 3770k. These are some awesome numbers and some massive MHz from the upcoming Ivy Bridge platform.

This isn't the first time we've seen some massive MHz. Sure, it's higher than we've seen before, but we've seen the AMD Llano A75 platform and AMD Bulldozer 990FX platform both offer us memory speeds of over 2600MHz DDR. The difference is that the Intel platform is just able to make such better use of the performance. The overall RAM performance is just so much stronger on the Intel Ivy Bridge platform.

The performance we've got out of the memory today isn't just a testament to what Intel has done with the Ivy Bridge platform, but also goes to show how aggressive G.Skill are being in the RAM market while also letting us know just how awesome the upcoming GIGABYTE Z77X-UD5H can perform, which didn't miss a beat all the way up to 2801MHz DDR.

Because we're dealing with yet to be released RAM, on a yet to be released motherboard using a yet to be released CPU, we won't be scoring the kit today. When the kit is ready to hit the retail side of things, though, and we're dealing with the official release of the new Z77 motherboard and Ivy Bridge CPUs, we'll be revisiting the RAM. If today is anything to go by, though, this is going to be a kit that performance Ivy Bridge users are going to want. Let's just cross our fingers you're able to get a chip with a good IMC as that's going to be critical for overclockers. 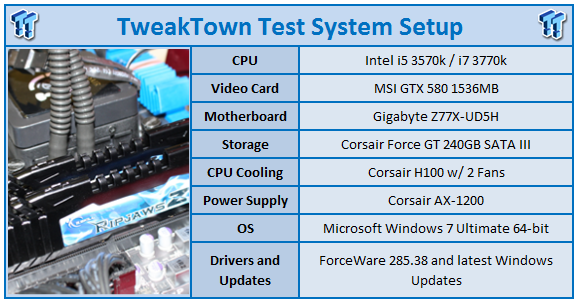