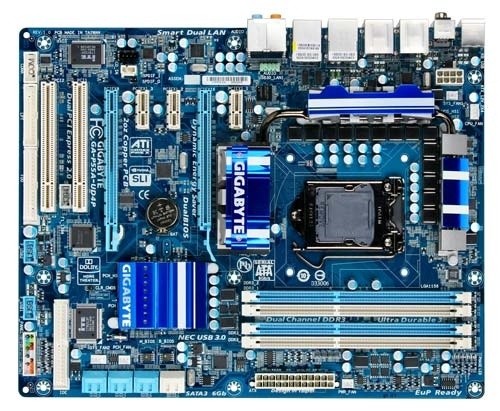 
When we tested the ASUS P55 and GIGABYTE P55 boards with USB 3.0 and SATA 6G, we found some interesting numbers when using the GIGABYTE P55A-UD4P in RAID 0. For the most part we didn't see much of an improvement when going from a single to a dual drive configuration with RAID 0. GIGABYTE also noticed the same issue and quickly went to work with Marvell to find a solution.

Today we have the latest firmware for the Marvell SATA 6G controller that GIGABYTE uses to get SATA 6GB RAID on their motherboards. At this time GIGABYTE is the only motherboard manufacturer to have SATA 6G RAID onboard.

When enthusiasts choose to pair a set of drives in RAID 0, they are looking to nearly double their performance. RAID 0 offers many a quick and inexpensive way to get solid performance gains out of the slowest component or subsystem in their computer. Simply put, when your hard storage system is running faster, your entire machine feels more responsive and appears to be faster.

Let's have a look at the specifications of the GIGABYTE P55A-UD4P that we used for testing. 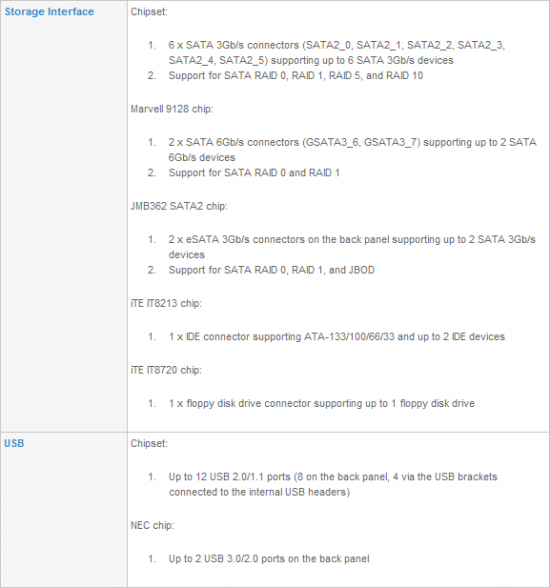 GIGABYTE's P55A-UD4P is one of the first motherboards on the market that features onboard USB 3.0 and SATA 6G. Given its advanced features that are added on GIGABYTE's already feature rich board, you might think that the new "A" revisions might break the bank, but Newegg currently has stock available at 184.99.

When we first took at look at the storage capabilities of the P55A-UD4P, we wanted to see how it and the ASUS P7P55D-E Pro compared to one another. ASUS made a bit of a fuss over the way GIGABYTE implemented the Marvell SATA 6G and NEC USB 3.0 to motherboards. The whole pitch ended up backfiring on ASUS when it came to light that ASUS used an almost identical solution on one of their own motherboards. ASUS ended up with another egg sitting squarely on their face when we were able to actually get a closer look at the two companies P55 solutions with SATA 6G. GIGABYTE included RAID and ASUS just used two standard ports.

I have yet to see the new firmware listed on GIGABYTE's website, but it should show up any day now. The version we used for testing is labeled SP1208. Installing the firmware is quite easy. I made a bootable thumb drive and dropped the SP1208 folder as well as the 9128.bat file on the drive then booted to it. After you boot your machine to the drive just type in 9128 and press enter, the software takes over and once everything is completed it asks you to reboot the system.


Our test systems were identical other than the motherboard used in each. The operating system drive for each was a Western Digital Raptor 150GB unit that I had a matching pair of. This allowed us to go back and forth between the systems.

AVADirect was kind enough to supply us with an Intel Core i7 870, the fastest LGA1156 processor available so we didn't run into any issues with the tests being CPU limited. Just like the systems that AVADirect builds, both systems were very fast and very stable.

To add to our testing workload, we also decided to add the ASUS U3S6 card to our standard Storage Product Testing Workstation just to see what would happen. The card installed fine after loading the drivers and reported working USB 3.0 and the Marvell SATA 6G controllers. We then added the Seagate Barracuda XT hard drive and ran some numbers.

As you will see, the benchmarks worked flawlessly but all of our reporting software had the drive listed as running under SATA 3G. The P6T7 WS Supercomputer is not on ASUS' list of supported motherboards, but we just couldn't help ourselves.

All tests were performed with a single Seagate Barracuda XT unless specified differently in the benchmark graphs.

With the inclusion of the Western Digital Caviar Black and the U3S6, we are going to have a lot of data to look at. Let's get started. 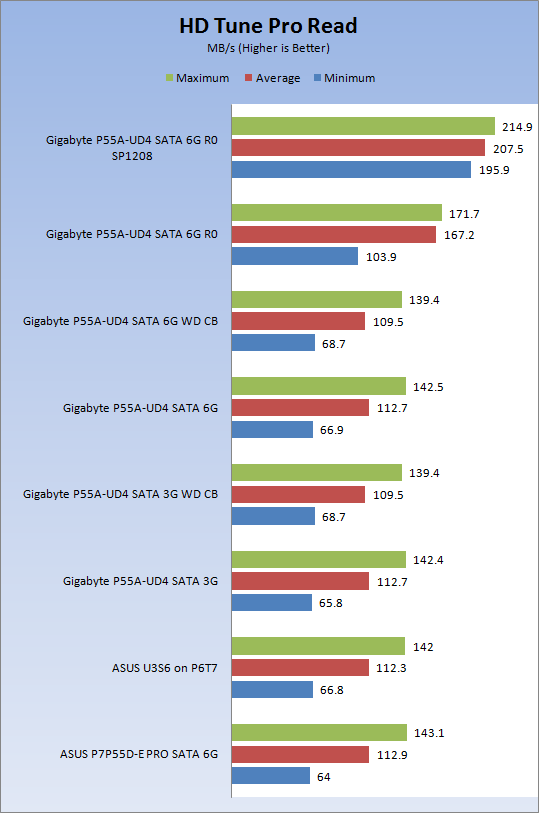 Right off from the start we see that the new firmware makes a big difference on the RAID 0 performance of the GIGABYTE "A" Series boards. Here we see a 40MB/s improvement in the average STR between the old and new firmware. 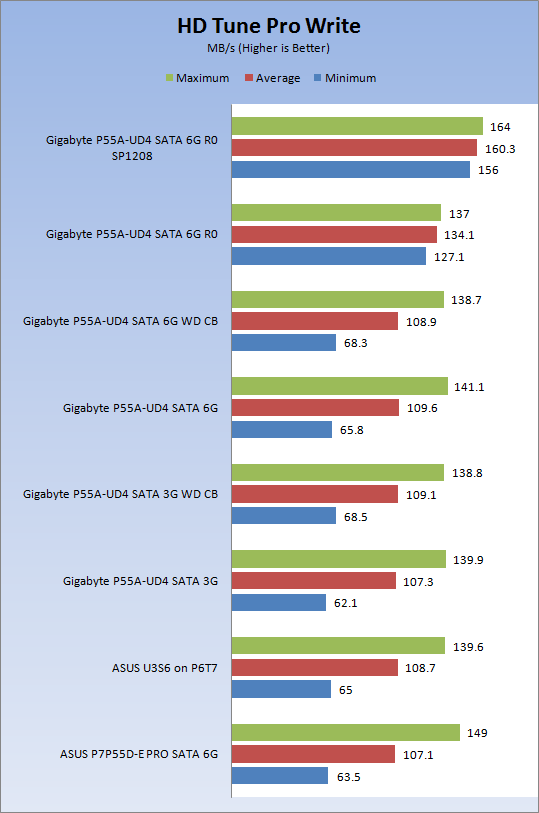 In the average write speed test we see a 30MB/s advantage with the new firmware. 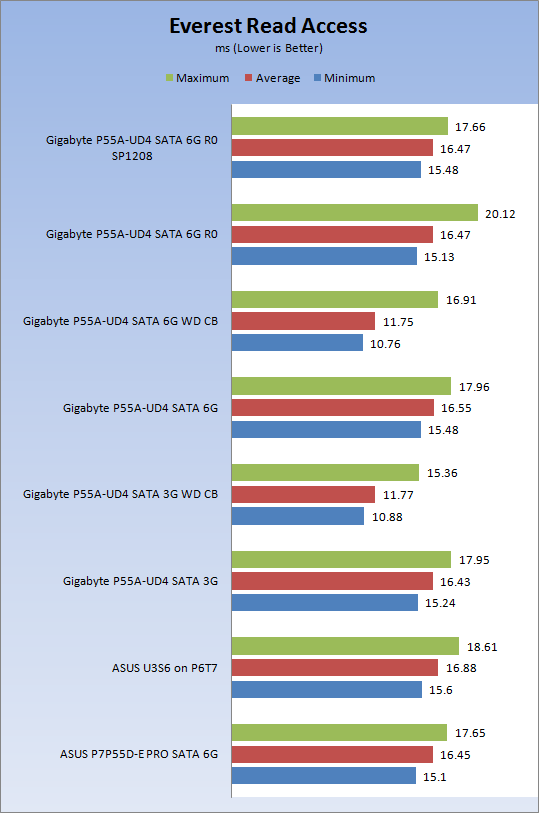 The average read latency with the new firmware had our RAID 0 numbers running right where they were at before. 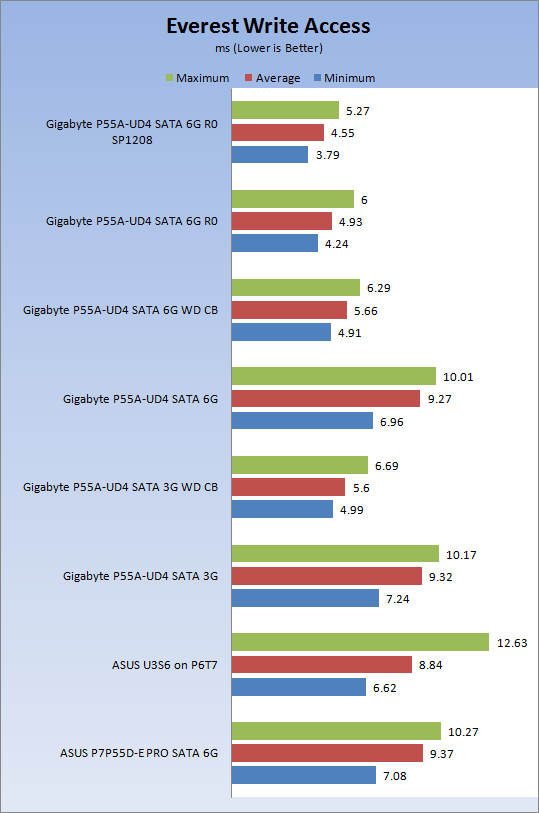 The write latency for the new firmware is lower than with the old firmware. Here we see quite a drop and when every millisecond counts, the results show that you would feel a difference in system response time.

Our real world Windows tests show that the new firmware is able to deliver solid across the board improvements in performance. 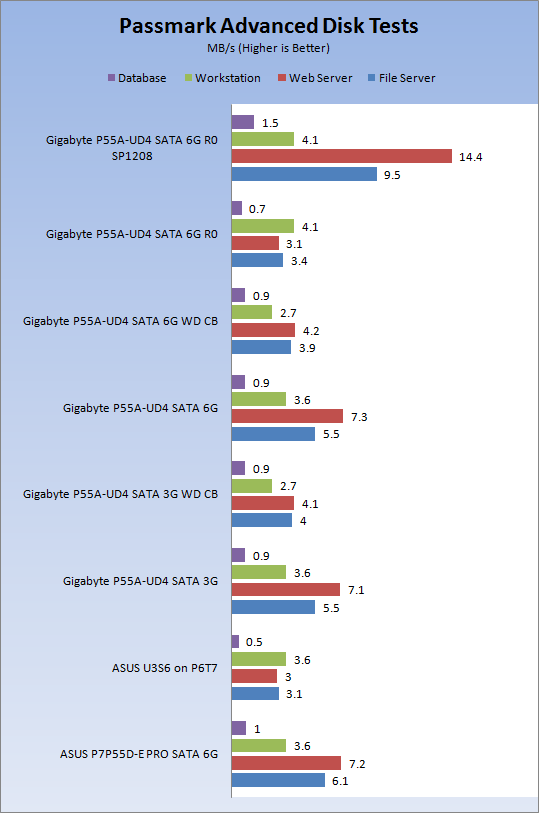 RAID was made for the enterprise market and these tests show us exactly why that is so. Here we see the three server tests showing quite a bit of improvement with the new firmware that allows us to take full advantage of the SATA 6G Seagate Barracuda XT. The workstation test shows identical results between the firmware, but those results are also much higher than those of a single drive.

There was a lot of hype surrounding out first article that put the ASUS and GIGABYTE SATA 6G boards to the test. ASUS made quite a bit of fuss over their SATA 6G being superior, but when it came down to it they chose the safe route and GIGABYTE took it upon themselves to be innovative with what tools they were allowed to use. Right from the start we liked the fact that GIGABYTE chooses to implement RAID on their boards and it really set them apart of the run of the mill standard solution used by ASUS.

During the first test we really liked the RAID, but when it came to the outcome the benchmark results made it seem like a lot of work for nothing. GIGABYTE thought the same and quickly went into action to find a way to allow end users to get the most out of their SATA 6G enabled products.

I am now completely impressed with the performance GIGABYTE was able to deliver with SATA 6G, but I am disappointed in the fact that it has not been released to the public yet. Hopefully in the coming days GIGABYTE will see that end users don't want to wait and will get the new firmware published quickly.

In my opinion I don't think there are going to be too many people rushing out to put two Seagate Barracuda XT drives in RAID 0, so this does give GIGABYTE a little bit of time to wrap up internal testing or whatever they are doing over there (besides getting the firmware on the site). This is going to change the first day Crucial releases their RealSSD C300, a solid state drive that is based on the Marvell SATA 6G controller. At that point all bets are off since desktop enthusiast users will be looking to purchase two smaller C300s and run them in RAID 0 on the only boards that provide onboard RAID 0, the GIGABYTE "A" class motherboards.