Having been already impressed by the HD 4870, it was time to head down to IBuyPower Australia to strap not one, not two but three of these bad boys into the ASUS P5E64 WS Evolution. Moving from two cards upwards on the HD 4850 caused some problems, but we're hoping that the HD 4870 doesn't have the same issues.

The P5E64 WS Evolution isn't the most ideal board due to the fact that the third slot only runs at x4; in a perfect world we would have all three cards running at x16. However, there isn't a board out there that lets us do this. Hopefully this is something that is addressed in upcoming chipsets since NVIDIA has three x16 slots on its 780i and 790i chipsets.

Since we've already looked at the Sapphire HD 4870 in a fair bit of detail, we're just going to have a look at some pictures of the test system before we get stuck into the results. So, with everything said and done, let's get stuck into it and see what happens when we put three of these cards together. 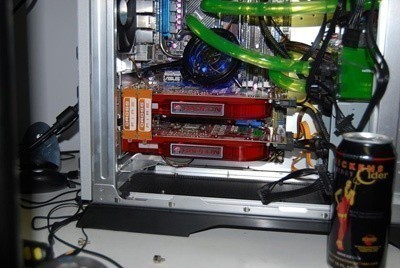 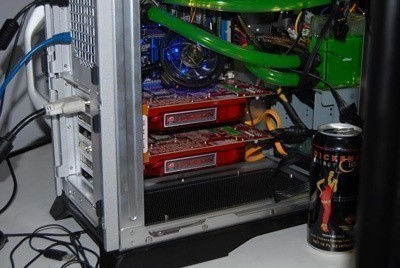 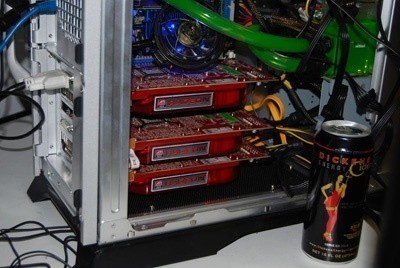 
What we've done is add our SLI results from the Tri SLI GTX tests to see how the HD 4870 compares to the much more expensive GTX 280 SLI setup. The only cards that are tested on the 780i SLI board are the two SLI configurations; all other cards are tested on the ASUS P5E64 WS Evolution.

In our first test we can see the CrossfireX setup coming out on top. The standard Crossfire setup sits just slightly behind and offers a good boost in performance when compared to the single card setup.

Vantage shows small gains with the CrossfireX setup; the two card setup offers some good gains over the single one. Two cards put us ahead of the single GTX 280, but can't really compete against the two and three GTX 280 setups.

PT Boats shows us almost no difference between one, two or three cards; it only manages to fumble with three cards at 2560 x 1600 where performance goes backwards. Since the game can't make use of Crossfire, the dual card setup still sits behind the single GTX 280.

CINEBENCH shows us big numbers for the single AMD card with a 1500 point jump over the single GTX 280. Adding multiple cards actually has a negative effect on CINEBENCH performance.

Moving to two cards sees the HD 4870 come out ahead at the higher resolutions, also managing to outperform the other setups here at 1920 x 1200. When we move to 2560 x 1600 the CF configuration performs about the same as a single GTX 280. Adding a third card into the mix does nothing for performance, it has a negative effect in some tests which we saw a lot in our HD 4850 CFX testing.

At the lower resolution we see a decent boost when adding the second card, putting it ahead of the single GTX 280. Unfortunately, as we move up in resolution the gains can't really be seen.

UT3 manages to get some good gains at 2560 x 1600, making the Crossfire setup perform well above the single GTX 280. When we add another card our score goes even higher, giving us the fastest configuration here.

Under 3DMark06 we really can see the benefits of three cards. In this case, ATI again have the fastest configuration. We know for a fact, though, that this doesn't translate into the real world.

Adding the second card into the mix under WIC sees some excellent gains, putting it just ahead of the single GTX 280. Adding a third card does nothing for performance and we end up with single card numbers again.

The first thing I have to say is that it's nice to see CrossfireX with the HD 4870s not having the same issues as we experienced with the HD 4850 setup. Adding three cards into the system, while for the most part did nothing, it didn't offer horrendously backwards performance, bar one or two tests.

The numbers here today do have a big up on our 3GHz test bed, and it shows that you do begin to hit CPU limitation in some areas with such a massive amount of GPU power. At 3GHz we find 3DMark06 sits around the 16k mark; here today our CrossfireX configuration scored over 22k.

The good news is that 4GHz isn't exactly out of reach for a lot of people these days; it's one thing to turn around and test Crossfire on a 5.7GHz LN2 cooled system, but that doesn't help 99.9% of computer users out there. 4GHz shouldn't be too much of an effort with the right CPU and extremely good air cooling, or some decent water cooling like we used here today would certainly suffice.

The HD 4870 is an impressive piece of kit and does a good job of outperforming the GTX 280 when in Crossfire configuration, providing the game makes use of the technology, that is. Ultimately, the GTX 280 is the fastest single core GPU on the market at the moment; but that's not the be all and end all these days. Sure, if you've got money to burn, buy one; buy two! - But truth be told; the everyman and women who wants a good gaming experience and doesn't want to break the bank is going to be looking at the HD 4870 priced at 1/2 of the GTX 280. If they really feel like indulging and the games they play make use of CF technology, purchasing a second will put them at the same price as a GTX 280, and mostly with better performance.

AMD are now offering extreme performance at a very good price; NVIDIA on the other hand offer extremer (is that even a word?) performance at a higher price. Is the extra cost justified? - That's really up to you. Which route you go is going to come down to how much money you're willing to burn. Throw in the cost of a 780i or 790i over an X48 and going SLI becomes very expensive, very fast. But we're not nave; the ultimate gamer with no budget is still no doubt going to be looking at SLI, as it's ultimately the fastest solution.