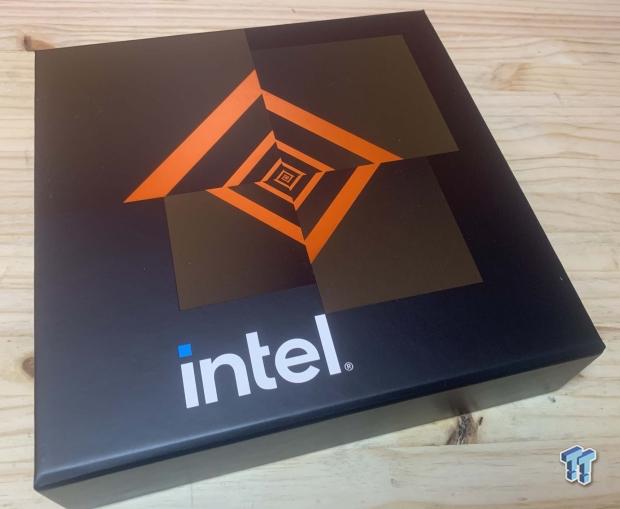 After seven months on the market, Intel's Rocket Lake comes away as a platform that brought new technology in PCIe Gen4 and additional connectivity to the LGA1200, a stop-gap to LGA1700. On top of this, 11th Gen Core was a relatively successful platform thanks to AMD stock woes and the current marketplace, something Intel didn't have to deal with on most SKUs. This leads us to today, where most of you know, Alder Lake has been unveiled, and we can now show off the performance and benchmarks.

Alder Lake takes advantage of a hybrid architecture using "Golden Cove" high-Performance P-Cores and "Gracemont" Efficient E-Cores. There are several enthusiasts or gamer SKUs, seen above. Of course, the 12900K is the top offering with an 8+8 design with added HT on the P-Cores, the base frequency at 3.2GHz for the P-Cores, and 2.4GHz on the E-Cores.

Several Turbo Frequency technologies can boost the clocks organically with Alder Lake, the peak being Intel Turbo Boost Max 3.0, which gives the 12900K a top clock of 5.2GHz on the P-Cores. Additionally, we have a next-gen iGPU with UHD 770, 20 CPU PCIe lanes, and support for DDR4 and DDR5 memory standards. 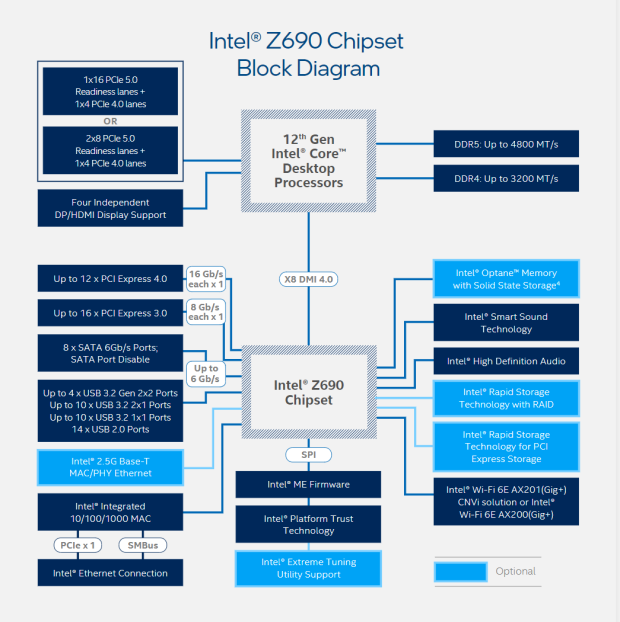 Z690 continues to build off of the last generation Z5980 platform, offering increased connectivity with options for vendors to deploy either PCIe Gen4 or Gen3 lanes via the chipset. We still have the same 8x port SATA setup and 1Gbe NIC as a base, though most vendors will opt for 2.5Gbe on their platforms. USB connectivity includes the option for 4x Gen2x2 ports alongside 10x USB 3.2 and fourteen USB 2.0. 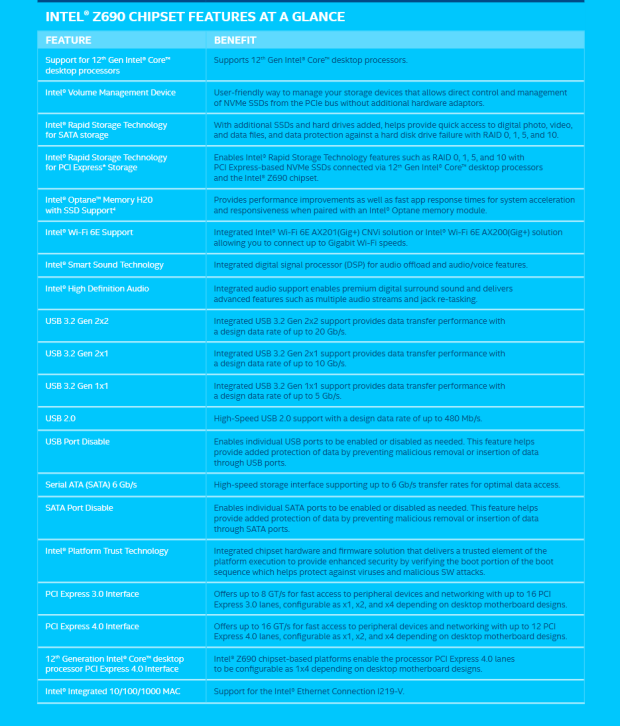 For those wanting a bit more explanation on the features of the Z690 chipset, Intel has included the slide seen above. 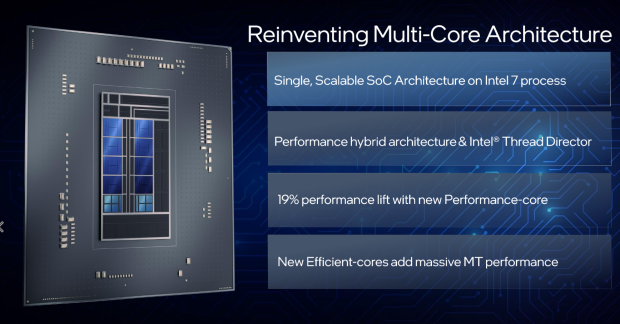 12th Gen Desktop processors bring together new architecture improvements with the Intel 7 process technology and hybrid architecture between P and E Core designs. Top offerings will be 16 cores and 24 threads with increased cache both L2 and L3.

Platform support is where consumers will connect with Alder Lake, with motherboards supporting both sixteen lanes of PCIe Gen5 alongside another twelve PCIe Gen4 chipset lanes. DMI has been updated to offer eight 4.0 lanes while connectivity now offers WiFi6e support integrated, and Intel UHD graphics have been updated as well.

Generation over Generation, gaming performance sees a huge uptick. In some games like Troy, we see up to 30%. The newly released Far Cry 6 enjoys a solid 15% bump in performance. 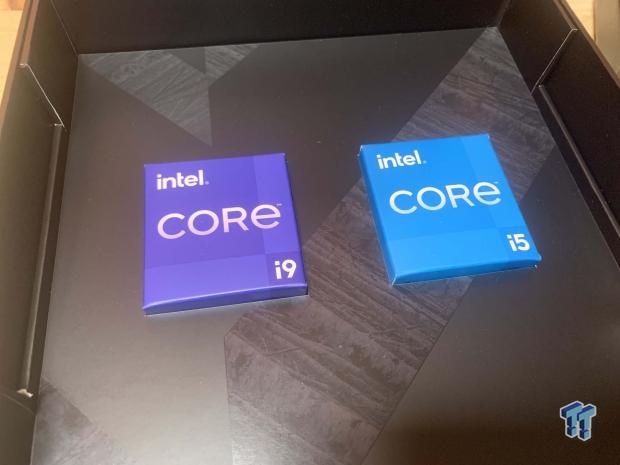 We did receive the media kit for Alder Lake, like many other sites. This included both the 12900K and 12600K that we will touch on in a separate review. 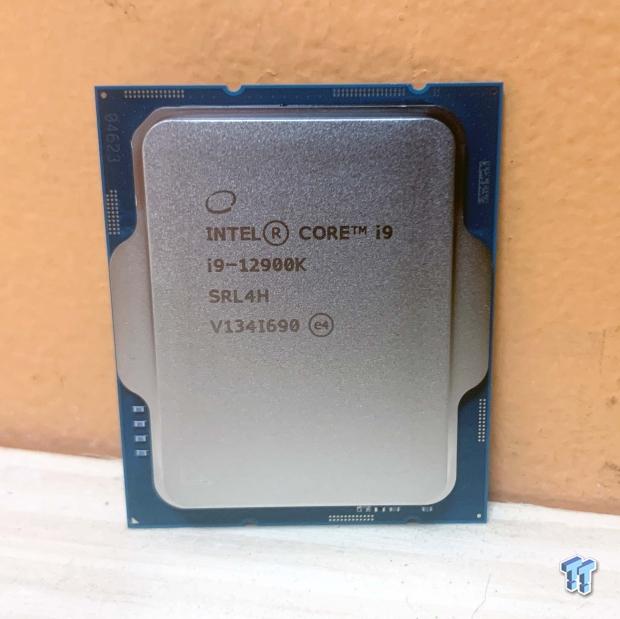 The 12900K does have a longer design to fit in the extra pins; this includes a longer HIS as well. Locating pins are on the top and bottom now rather than the sides. 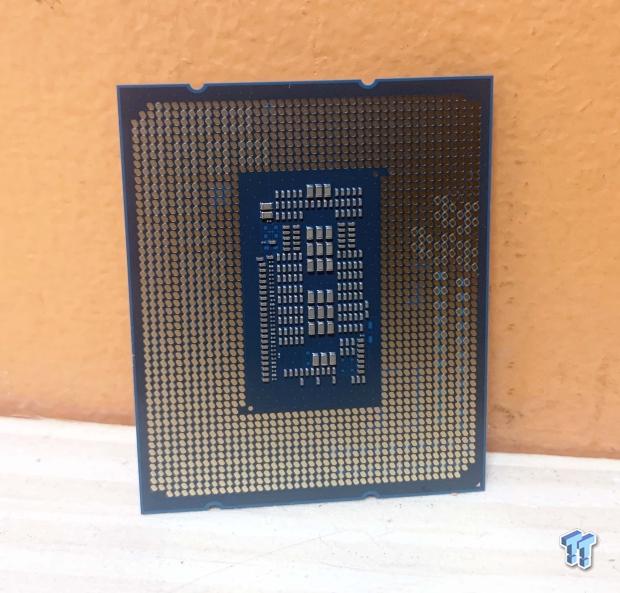 On the LGA side, we have 1700 pads, some of which appear to be reinforced at this angle. 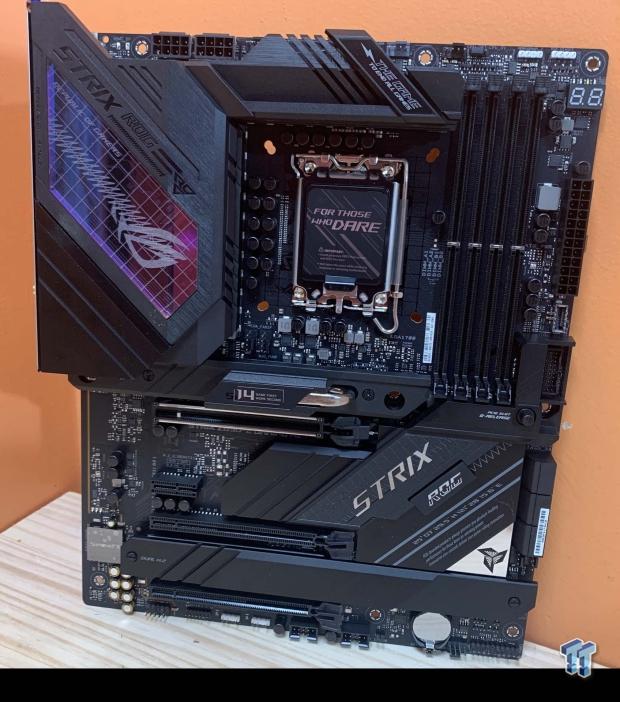 Our full test setup, seen above, does include a kit of Micron DDR5. Additional components are listed below.

Cinebench is a long-standing render benchmark that has been heavily relied upon by both Intel and AMD to showcase their newest platforms during unveils. The benchmark has two tests, a single-core workload that will utilize one thread or 1T. There is also a multi-threaded test that uses all threads or nT of a tested CPU. We run both the legacy R20 and modern R23. 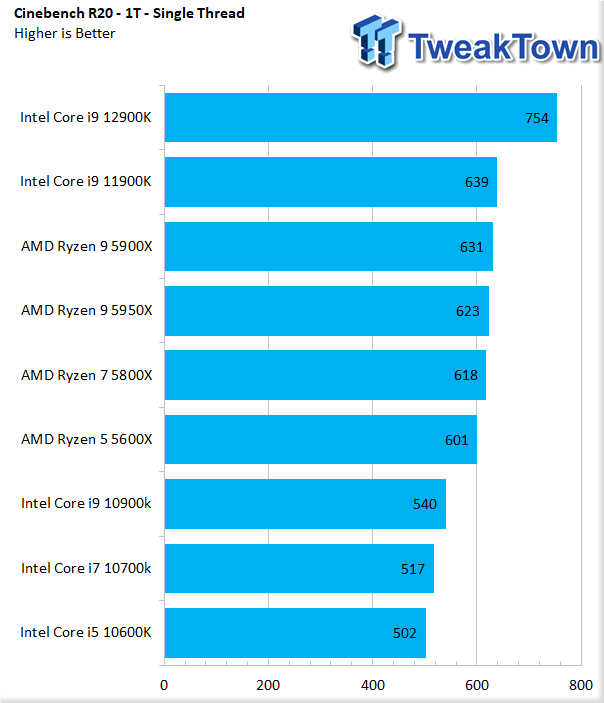 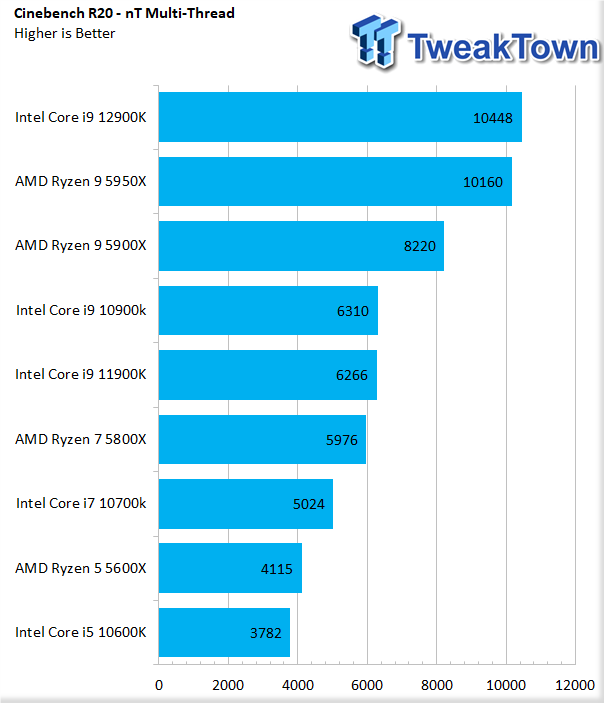 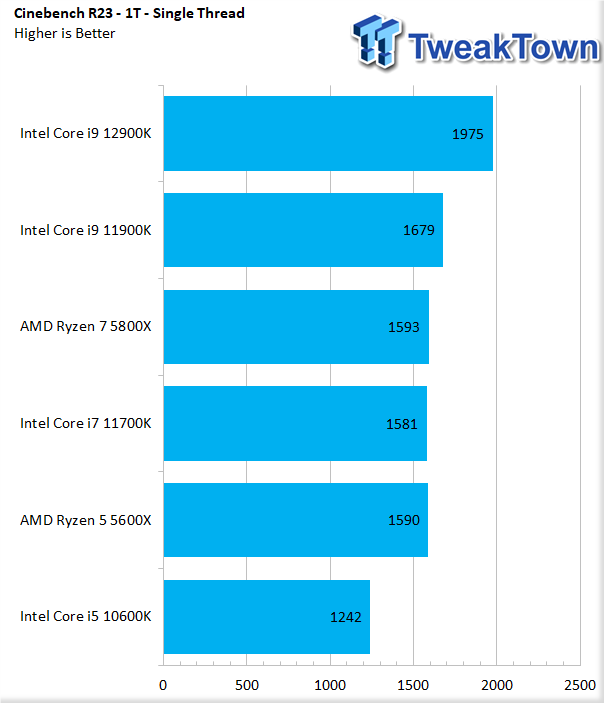 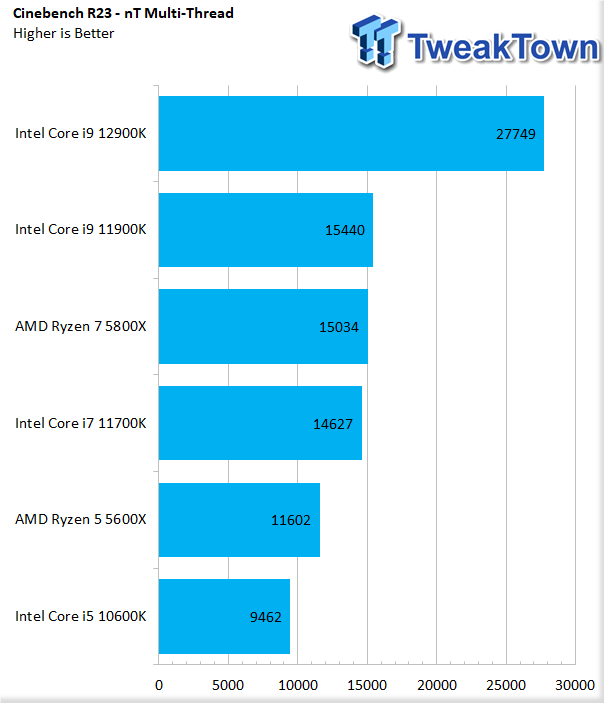 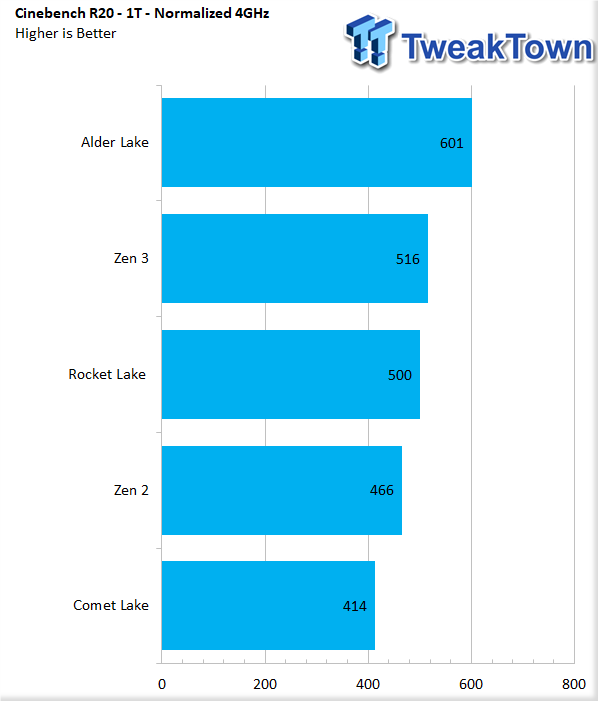 Normalizing all CPUs to 4GHz, we ran single thread R20 to check IPC. In this scenario, we see 601 from Alder Lake, a good bit above Zen 3. 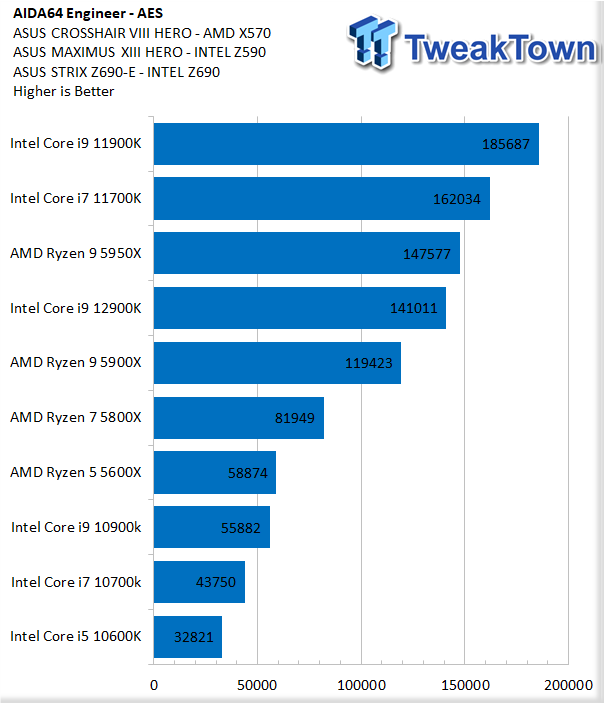 AIDA64 still has yet to officially support Alder Lake in any of their benchmarks, but preliminary runs show 141011 for AES. 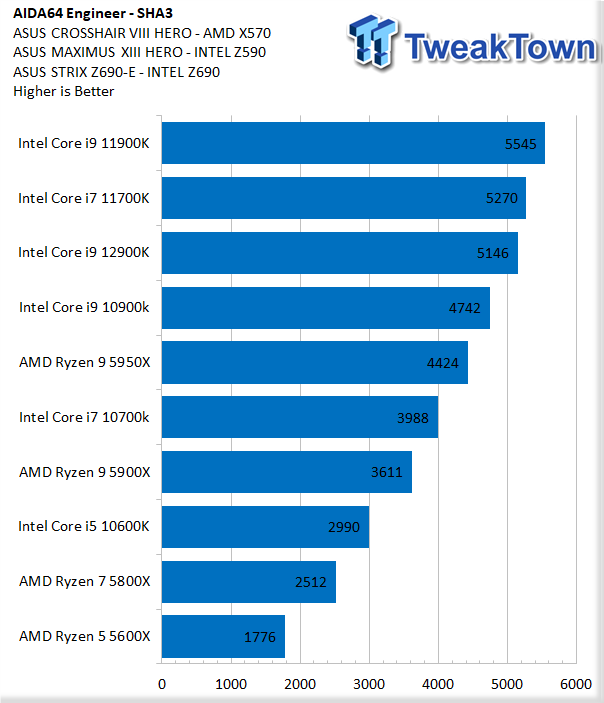 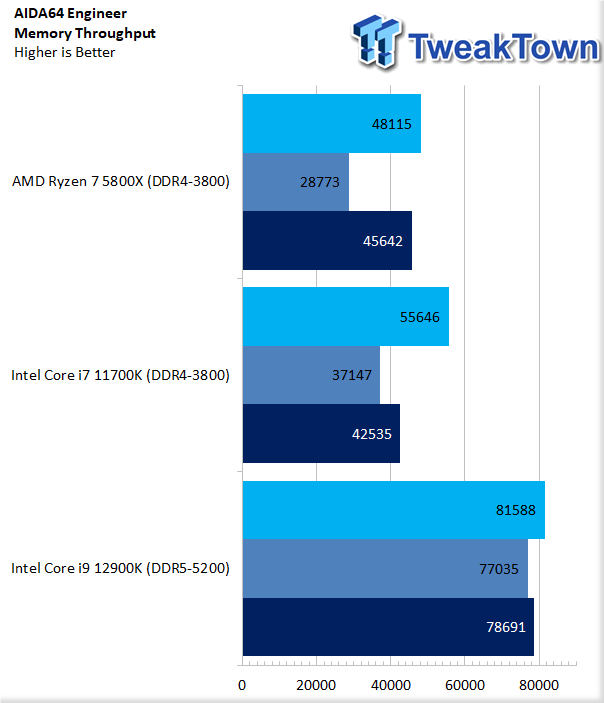 As we assumed, DDR5 adds a significant amount of bandwidth to the platform. In our testing at 5200MHz, we have 81K read, 77k write, and 78K copy.

PCMark is a benchmark from UL and tests various workload types within Microsoft Office and Edge. 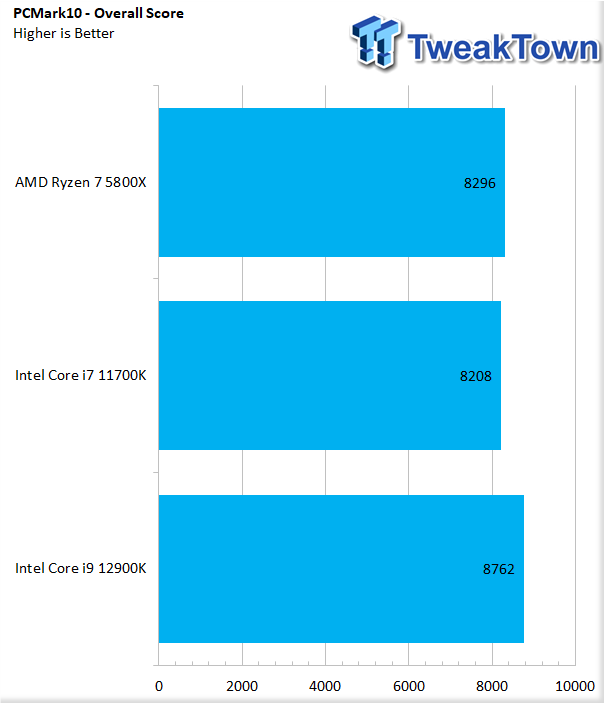 PCMark overall gives us a score of 8762. 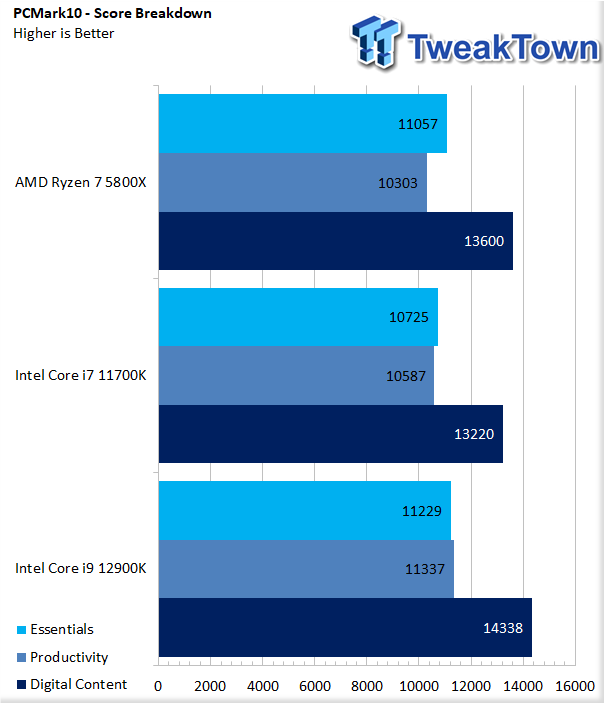 Score breakdown shows a solid uptick in digital content to 14338 for the 12900K. 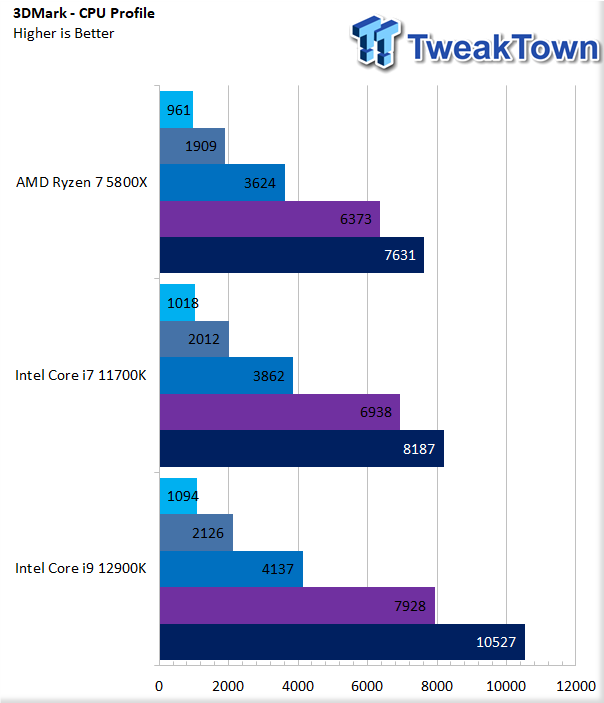 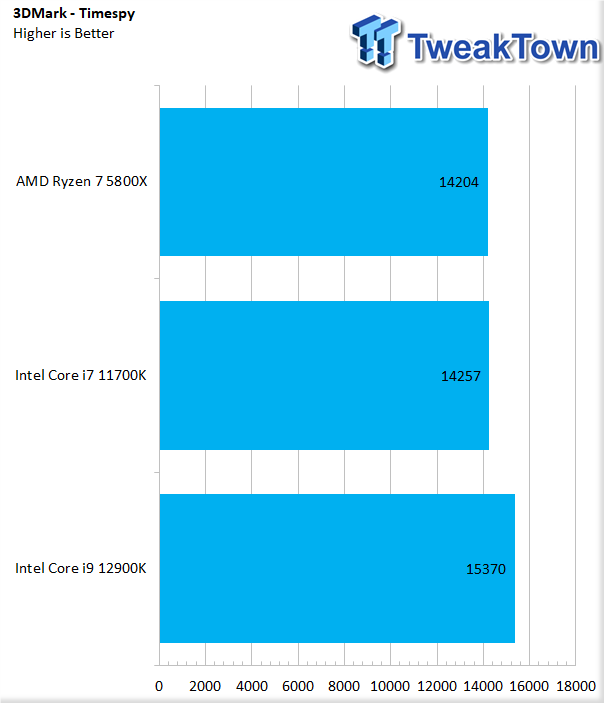 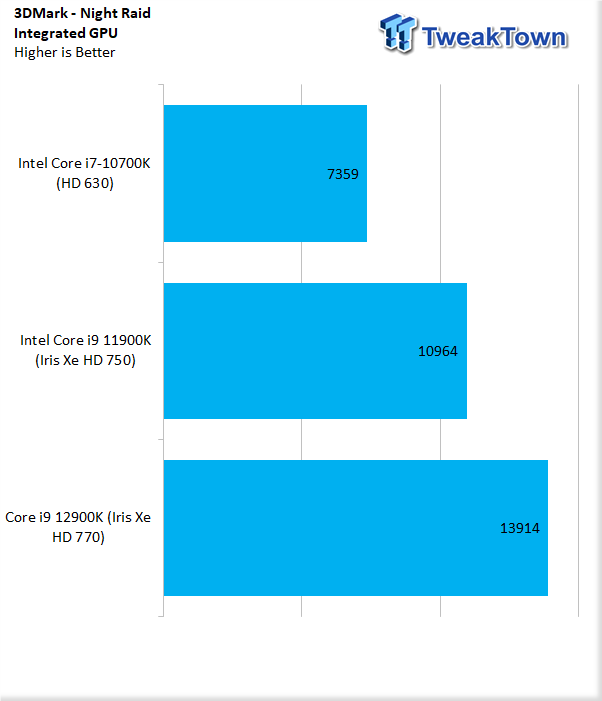 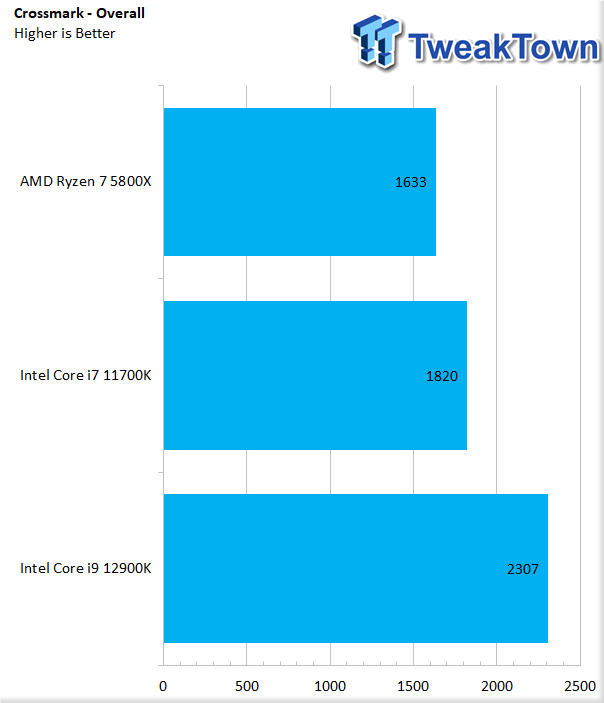 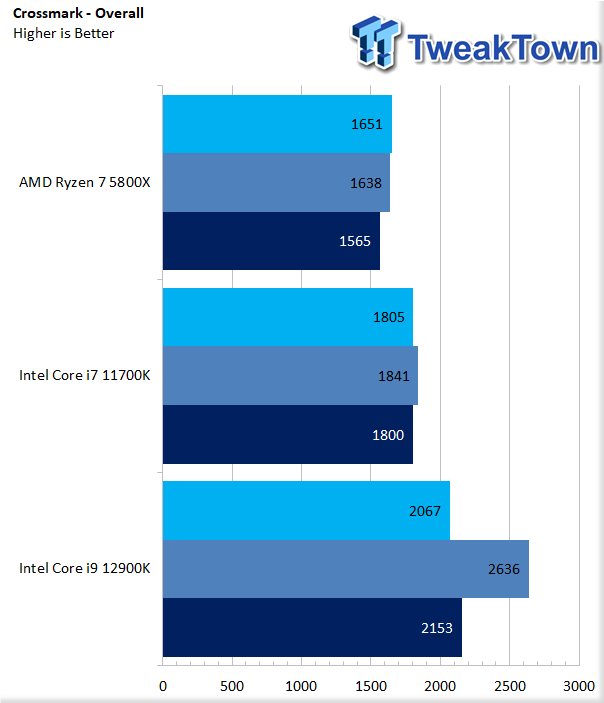 The breakdown for CrossMark includes a huge jump in each scenario. 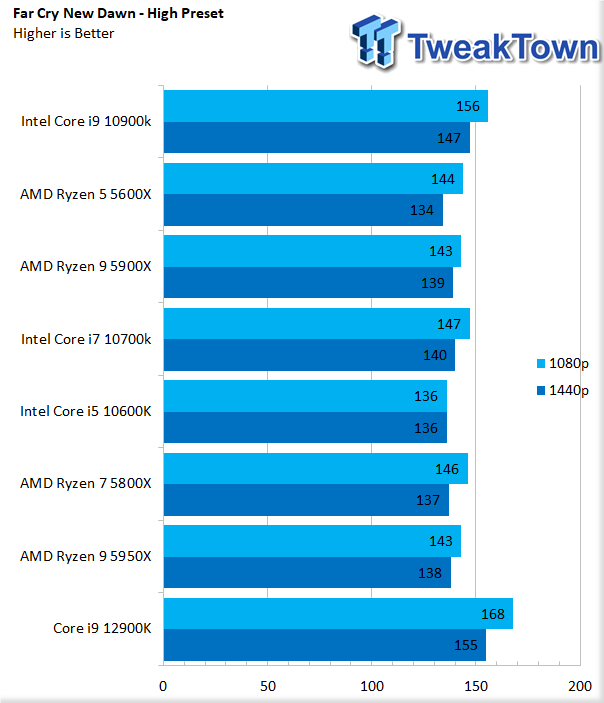 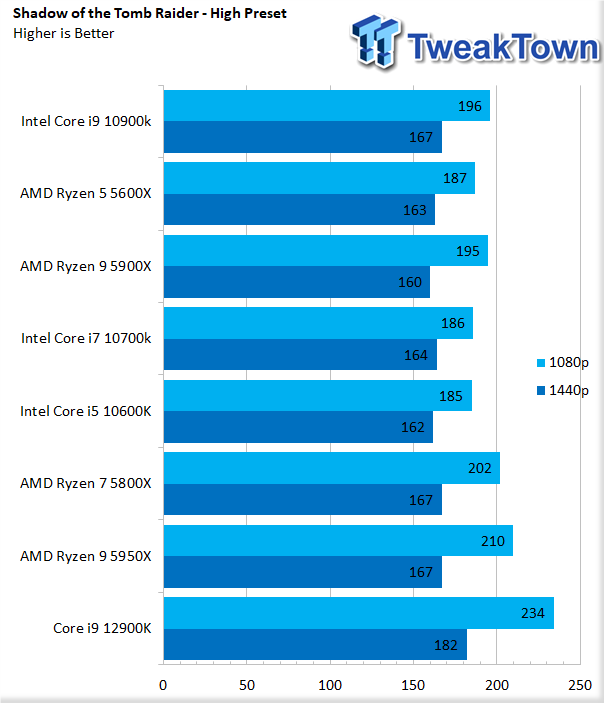 I used Far Cry New Dawn and Shadow of the Tomb Raider for comparison purposes, testing 1080p and 1440p gaming at high resolution.

We had just gotten in the S70 Blade from XPG when the Alder Lake kit arrived for testing, so we used it for this article. Storage performance appears to be on par with Gen4 platforms at 6733 MB/s read and 6422 MB/s write. 4KQ1 touched 90 quite easily in read, and random write moves upwards of 340 MB/s. 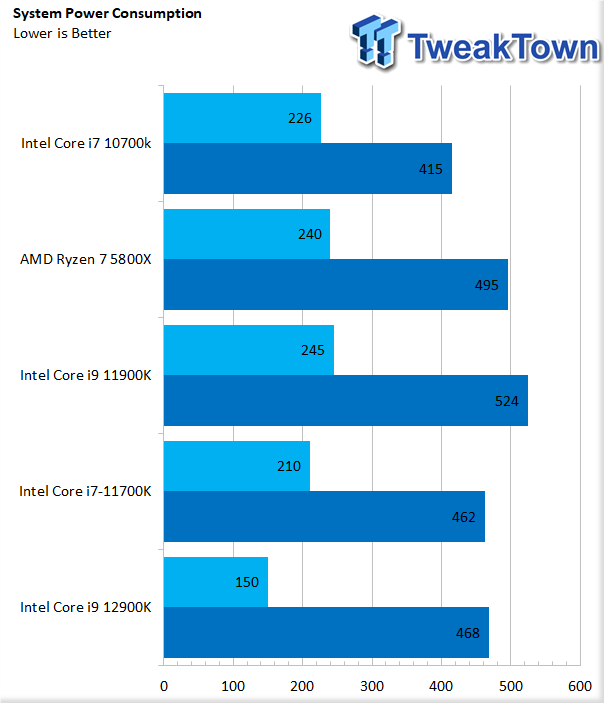 Power consumption for the 12900K was nearly 80 watts lower at idle than the previous platform while managing about 50 watts less at load despite the additional cores. 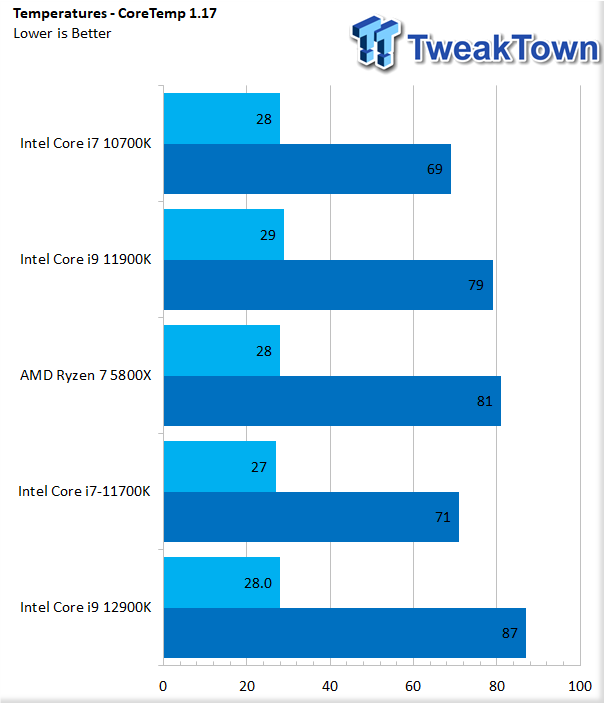 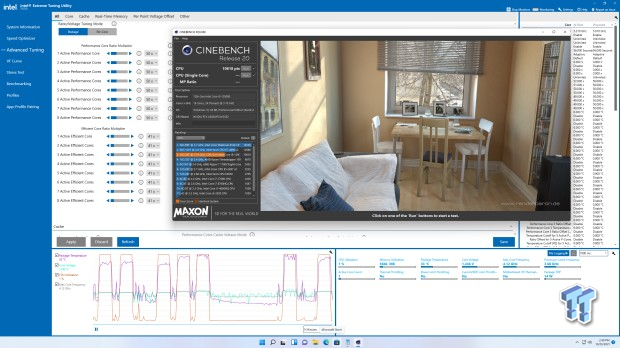 I did play with Intel XTU to see where the chip would run without manually changing anything. For our chip, which ASUS has rated at SP90 in the BIOS, we saw an E-Core overclock up to 4.1GHz and P-Core to 5GHz. Of course, these chips will overclock better, with increased cooling; keeping in mind, we are on air for this review.

Just a few weeks after the launch of Rocket Lake in March, we started hearing about Intel Alder Lake and just how good it would be both performance-wise and the platform upgrades that include DDR5 and PCIe 5. Now here we are, myself, several hours past testing and have been able to really think about the 12900K.

Memory throughput is up, of course, with DDR5. Our kit of standard Micron RAM ran at 5200MHz and enabled us to pull in 81K read 77K write in AIDA64 memory bandwidth tests. CPU Profile, the newest part of 3DMark, enabled a solid gain in both 8 thread and 16 thread scenarios, a 1000 point jump at 8 thread and 2000 with 16 threads.

Gaming is up as well, as predicted, overall 1000 points in Timespy. Real-world scenarios like Far Cry or Tomb Raider showed solid gains upwards of 20FPS in 1080p and 10 FPS at 1440p.

That all said, the upgrade path for Intel this time around puts consumers out quite a bit of cash. The move to DDR5 will come with a hefty price tag as we know, consumers can opt for a DDR4 platform for LGA1700, but I'm guessing most of you want the increased throughput of DDR5. This adds to the current GPU market that's already made building a PC impossible except for those with plenty of cash to spare.

Thankfully, Intel has priced these CPUs very aggressively, the 12900K tray price coming in at $589, making it likely $150 cheaper than AMD's top offering in the 5950X.

Intel delivers with its new hybrid Alder Lake architecture, a CPU that beats down the best AMD has to offer and at a cheaper price.