Razer has stepped things up with the BlackShark V2, and while it still may have some issues, I believe the direction of this headset is straight and true. Razer now has a very decent gaming headset in the $99 price range that I can recommend.
Buy at Amazon 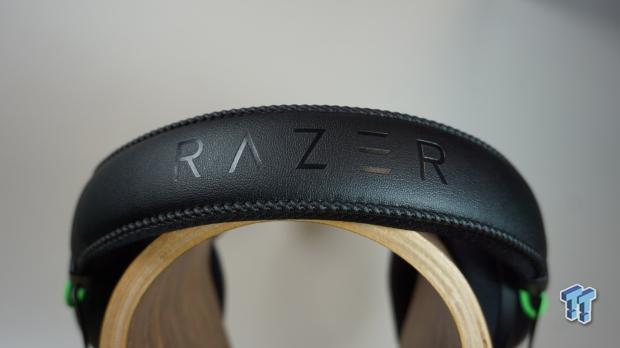 Today we will be taking a look at the more expensive variant, the BlackShark V2, which will be what it's referred to in the remainder of this review. Now, to be completely honest straight off the bat, I haven't been the biggest fan of Razer gaming headsets, but I'm hoping that the BlackShark V2 can turn things around for me.

The BlackShark V2 is priced at a very competitive price point of $99 and is competing against the likes of some of my favorite headsets on the market - Sennheiser GSP 300, FNATIC REACT, and SteelSeries Arctis 3 Bluetooth. I'm very interested to see how the BlackShark V2 fairs up against each of these headsets and if Razer has accomplished something great with this new product. Before we get into whether or not they have done it, let's jump into a close up of the headset. 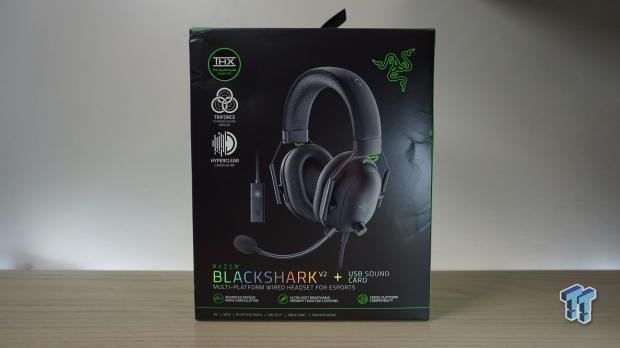 First off, we have a front-on view of the BlackShark V2 packaging, and as you can see, the packaging is very typical of Razer - all black with green outlines and shiny text. Nothing too unexpected here. 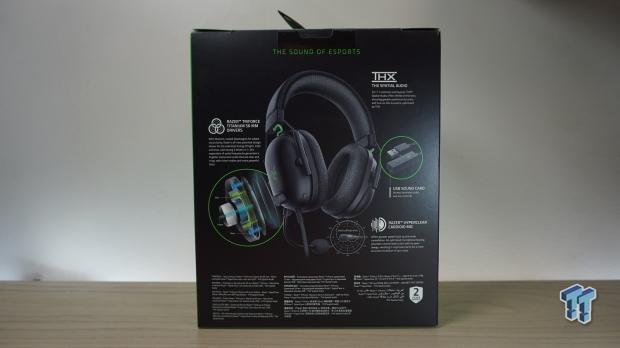 On the back, we have a more detailed image of the headset and some further descriptions of some of the features that come with it. We can notice the THX Spatial Audio, as well as the USB Sound Card. 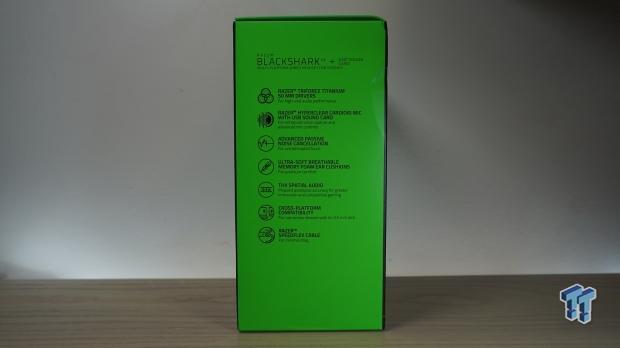 The box's side has a summary of the BlackShark V2 features, which is again, quite standard for Razer and something I believe the consumer appreciates. 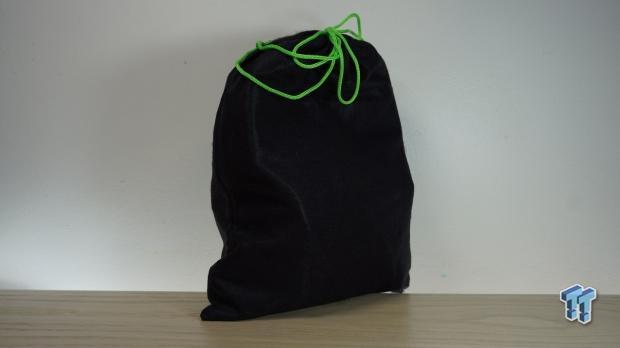 The BlackShark V2 comes with this bag, which I assume is for when you are deciding to take the headset somewhere else, such as a LAN party or to a friend's house. 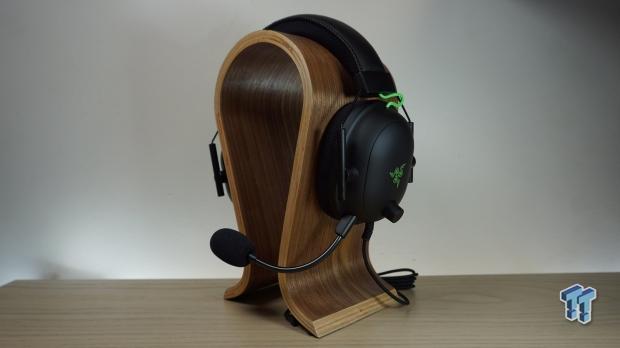 Here we have an image of the BlackShark V2 out of its box. As you can see, Razer has stuck with its typical all-black matte design combined with its standard green logos and cables. 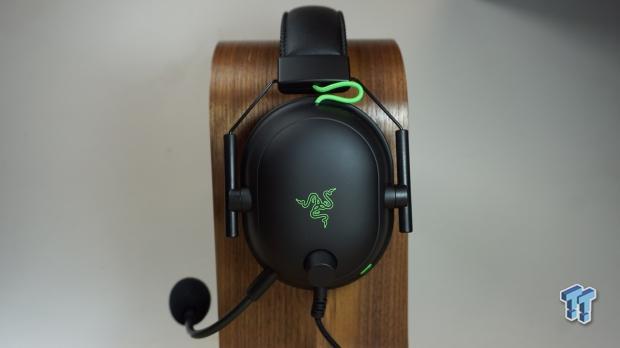 In this image, we can see the BlackShark V2 comes with a large volume knob - I will get more into the positives and negatives of this design choice in the review's design section. 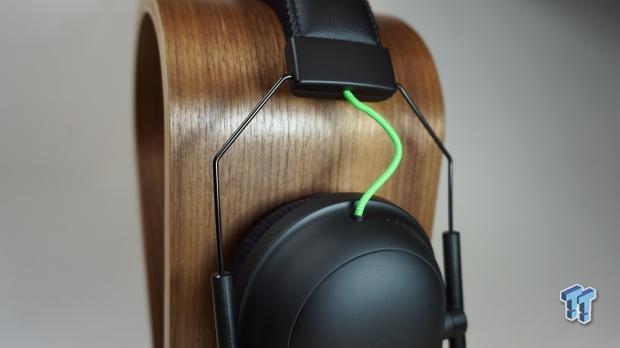 Here we are taking a close-up look at the size extension mechanism of the BlackShark V2. Razer has stuck with the aviator theme, and well, I will get more into the positives/negatives in the design section of the review. 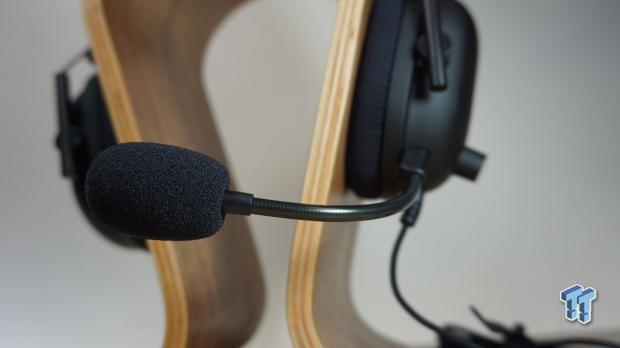 Above is a close-up shot of the removable microphone, and as you can see, the microphone comes with a large pop-filter. 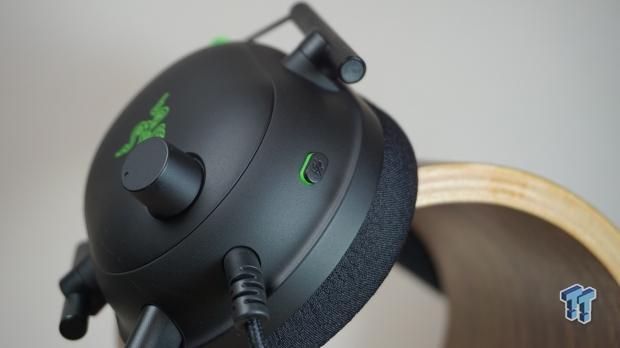 On the left earcup is a single button, and that is the mute microphone button. 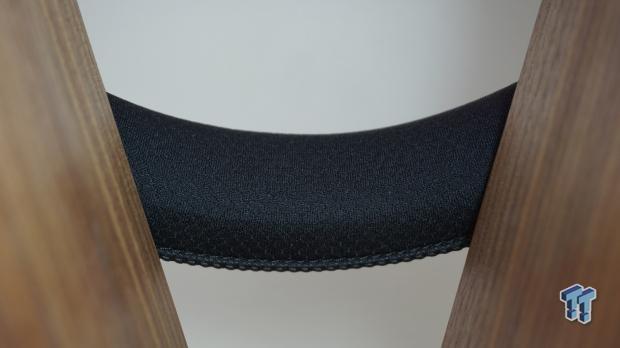 Here we can see the fabric used on the headband's underside, and I can say it's quite soft and comfortable. 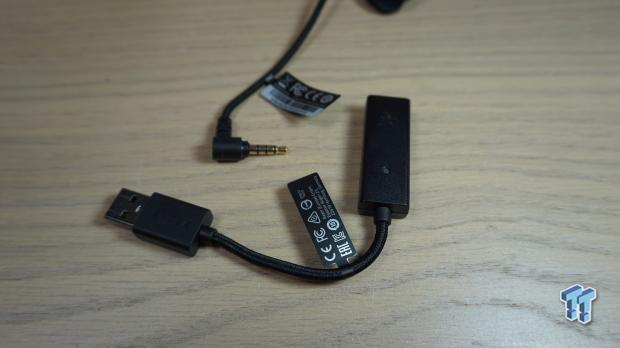 Lastly, we have an image of the USB Sound Card, and as you can see, it's quite slender.

The BlackShark V2 follows in the footsteps of the original BlackShark, with Razer sticking with the whole aviation theme. Unfortunately, I feel a lot of the BlackShark V2's flaws lay within its design, but before I get into the headset's flaws, let's talk about the positives.

I really love the low-profile look Razer has gone with the BlackShark V2. When worn, the BlackShark V2 almost feels like it disappears on your head, and I believe that is a combination of the very comfortable earcups/headband and weight. Razer has also kept things very simple when designing functionality choices, opting only for a single mute microphone button and a volume wheel. I really like the choice of having the volume wheel on the outside earcup, instead of on the back of the left earcup, where most headset companies choose to put it. 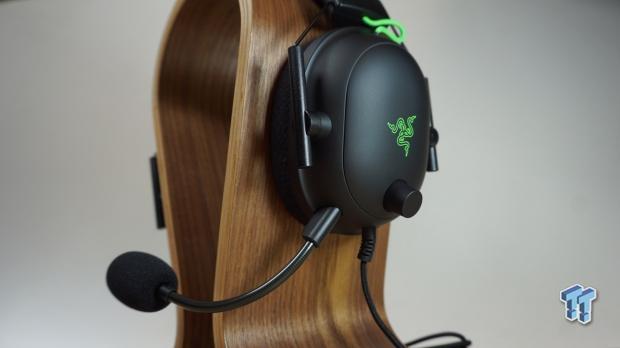 Going back to the earcups again, the fabric Razer has chosen to use is very interesting. At first, I wasn't the biggest fan of it, as I felt strange when I touched, but after some use, I was convinced that the fabric was top-tier in terms of gaming headsets I've used. In combination with the great clamping pressure and earcup shape, the fabric canceled out quite a lot of background noise. A small disappointment is that the BlackShark V2 X comes with leather earcups, which is something I would have preferred on the BlackShark V2, but you can't have everything, right?

Ok, now for the negatives. As I previously mentioned, most of the flaws with the BlackShark V2 are in its design, and I believe that the biggest flaw is in its build quality. The headset doesn't necessarily feel flimsy, but you notice its downsides when you really take a look at it. The earcups are hollow, and the frame that they are built on is held on by two small metal rails. I believe if the headset was to break anywhere, it would be these rails, and what is even more concerning is the exposed green cable, which could be subject to damage if the headset is poorly handled. 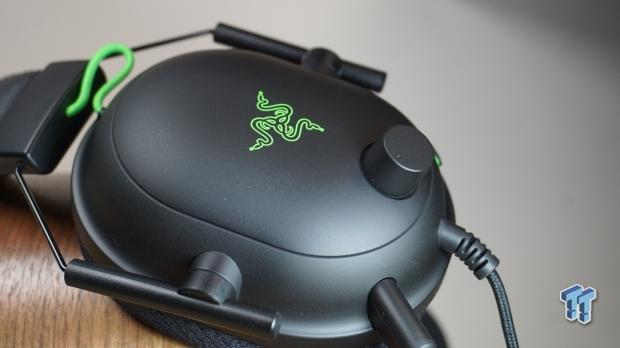 So, we have two things here. On the one hand, you have an extremely lightweight gaming headset that feels incredibly comfortable when you put it on, and on the other hand, that same headset's build quality is quite questionable. I believe you sacrifice the headset's build quality for its weightlessness, which is something the consumer will ultimately have to decide.

Overall, I think Razer has done a fantastic job with the design of the BlackShark V2, and other than the flaws in the build quality, I approve of the direction they have chosen. Great work here, Razer!

The BlackShark V2 uses the Razer Synapse software, and if you don't have that downloaded a link can be found here. 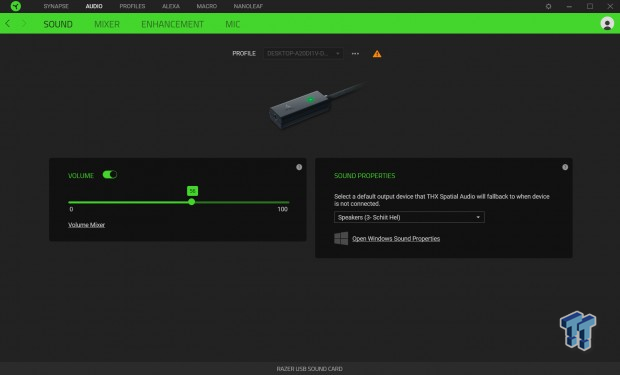 Above, we have an image of the Razer Synapse software looking inside the USB Sound Card. 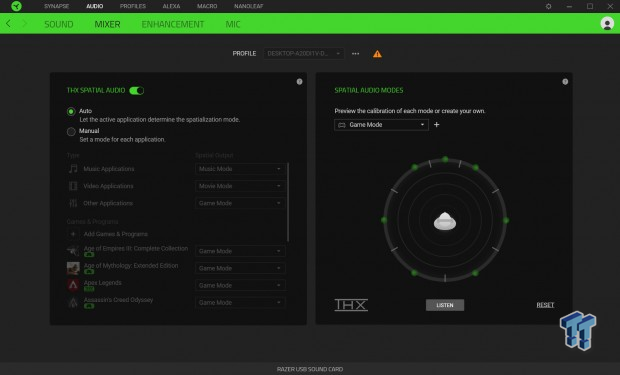 The sound card has many options for users, and above, we have a screenshot of the mixer setting. In this side of the software, users can select which kind of output goes into certain applications. I found just leaving this setting on Auto did the best for me, but if you want to curate your output more specifically, you have the option to do so here. 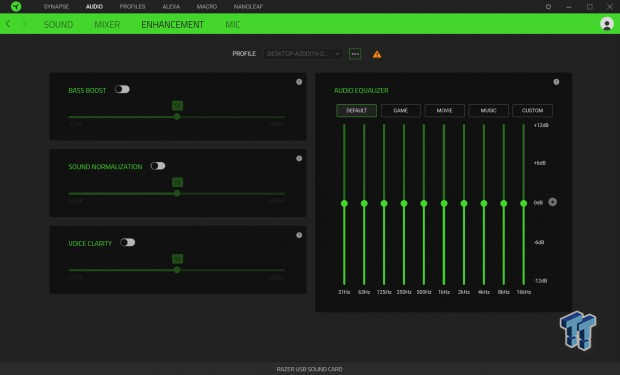 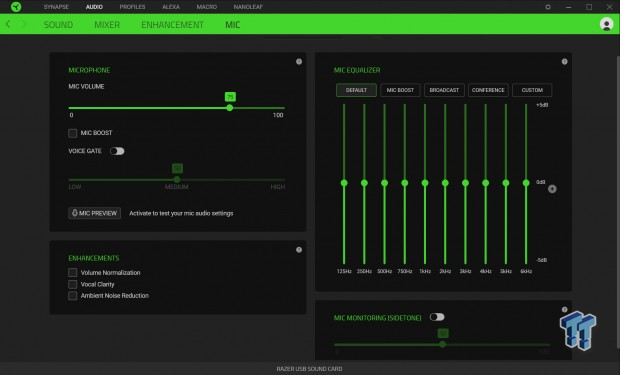 The Razer Synapse software is very straightforward, and I found no problems at all with using it. Great work, Razer!

As with all of my gaming headset reviews, I like to use the headset I'm testing from anywhere between 20 and 30 hours. I test the headset for this long to dive deep into the sound signature that a consumer would be experiencing if they bought the headset, and I believe around the 20 or 30-hour mark is where I develop that understanding.

Now, the BlackShark V2's sound signature is very similar to a few headsets I've tested previously, and surprisingly it's very different from the Razer Kraken X - and that's a good thing. 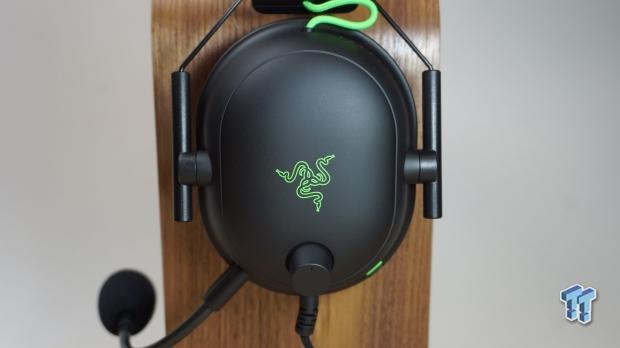 For testing, I put the Razer BlackShark V2 through many, many games of Apex Legends. The results were quite surprising compared to the Razer Kraken X. When I tested the Kraken X, I felt as if it had an over-emphasized mid/high range, and when I turned the volume up to really get into my game, it hurt my ears. With the BlackShark V2, there were none of those problems present, I could happily play the game at around 80% volume, and the audio experienced seemed very balanced across all of the ranges. High and mids sounded clear and crisp. While lows did lack a bit of bass, they were still a big improvement over the Kraken X.

I found that the BlackShark V2's sound signature was very similar to the Sennheiser GSP 300's sound signature, and even the Logitech Pro X. Both of those headsets gave a very balanced audio experience and is something I personally really appreciate in a gaming headset.

So, would I recommend the BlackShark V2 for gaming? Absolutely I would. The small lack of bass is no issue if you are playing competitive shooters such as Apex Legends, Call of Duty: Warzone, Counter-Strike, or Escape from Tarkov. I recommend the BlackShark V2 as a competitive gaming headset, and the THX Audio inclusion is just the icing on the cake when it comes to having increased spatial awareness.

As you can probably tell, the BlackShark V2 has quite a lot of compression at the higher ends of voice, and also, it doesn't have much low-end pickup. After researching the microphone, I found that the microphone itself is quite good, but what is causing these issues at both the high-end and low-end of things is the soundcard. The use of the soundcard has caused a bottleneck to happen in terms of microphone quality, which I find to be quite a peculiar design choice. 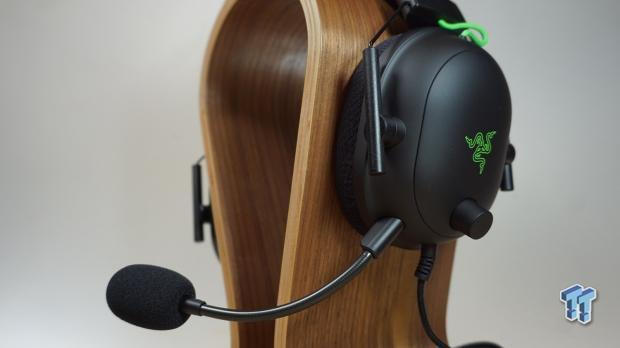 After discovering this was the case, I tried to test the headset without the soundcard by plugging it directly into my motherboard. Unfortunately, I couldn't get the microphone to record anything, and I'm still not quite sure why. I suspect that this problem could have something to do with my specific unit or even my motherboard. Luckily, this test has been done by other reviewers out there, so if you are after that comparison, you can check it out here.

The Razer BlackShark V2 is a massive upgrade in terms of sound quality compared to the Kraken X, and the implementation of the THX Audio gives users a slight expansion to the soundstage, which adds to the overall gaming experience.

Many of the BlackShark V2's issues are in its design, and while I certainly agree that the headset is comfortable and can be worn for extended periods, the build quality concerns me most. On top of that, Razer has bottlenecked the microphone quality with the sound card.

So, do I recommend you pick up the Razer BlackShark V2? Or should you go out and get a Kraken X? 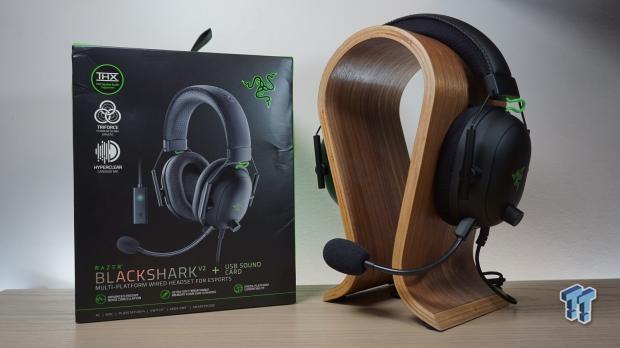 I believe that Razer has released a very formidable headset in the $99 price range. With all of the BlackShark V2's features, sound quality, and price, competing headset manufacturers are undoubtedly turning their heads in surprise. For me, Razer wasn't quite up to par in this price range, but now the BlackShark V2 has released, I can certainly say that they have met my expectations.

Razer now has a great product that easily competes with the likes of some of the best headsets in that category, such as the Sennheiser GSP 300, Logitech Pro X, and even the FNATIC REACT.

Razer has stepped things up with the BlackShark V2, and while it still may have some issues, I believe the direction of this headset is straight and true. Razer now has a very decent gaming headset in the $99 price range that I can recommend.