Consumers wanting the very best the market has to offer will certainly want to gravitate to the 980 Pro. It offers class leading read performance backed by a fantastic five-year warranty.
Buy at Amazon

Around the middle of last year, Phison jumped on the scene with its E16 controller bringing PCIe 4.0 storage solutions to the consumer market. Since then, we have seen the rise of several vendors using this design with both factory Phison firmware and custom variants built for their target market.

Meanwhile, in the back of our minds, we wondered where Samsung was, were they readying there own PCIe 4.0 solution? Nearly 15 months later, we finally have that answer; that answer is the Samsung 980 Pro.

The 980 Pro is an entirely new design from Samsung using its all-new Elpis controller, capable of handling 128 I/O Queues simultaneously, which just so happens to be four times quicker than the previous Phoenix controller used on the 970 Pro and EVO Plus.

The V-NAND used in this new solution had to be revamped, now boasting over 100-layers with the same 256/512Gb die sizes but a 10% faster read and write speed over 5th generation V-NAND. 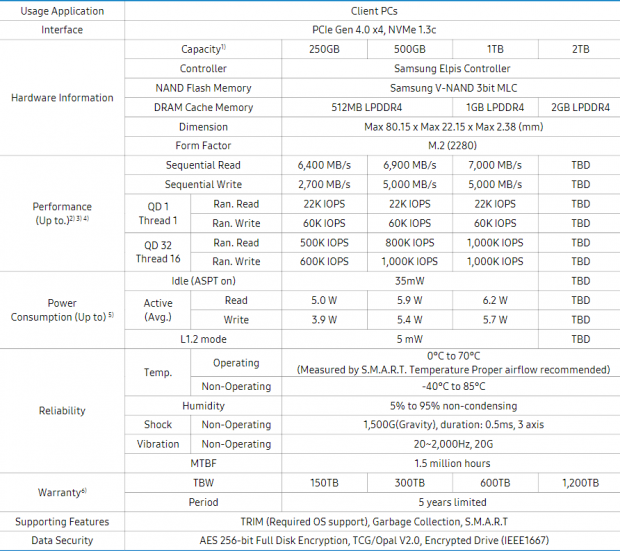 Just a quick overview of the specifications, the 980 Pro uses the same controller for all four models. All but the 2TB model will be available at launch, which is scheduled for later this year. The 250GB capacity sent for review is backed with 512MB DDR4 and 6th Generation 3Bit MLC VNAND.

The form factor is the typical m.2 2280 with performance reaching upwards of 6400 MB/s read and 2700 MB/s write while 4KQ1 will see roughly 22K read IOPS and 60K write IOPS. Reliability sees a rating of 150TBW for the 250GB model over the five-year warranty period. 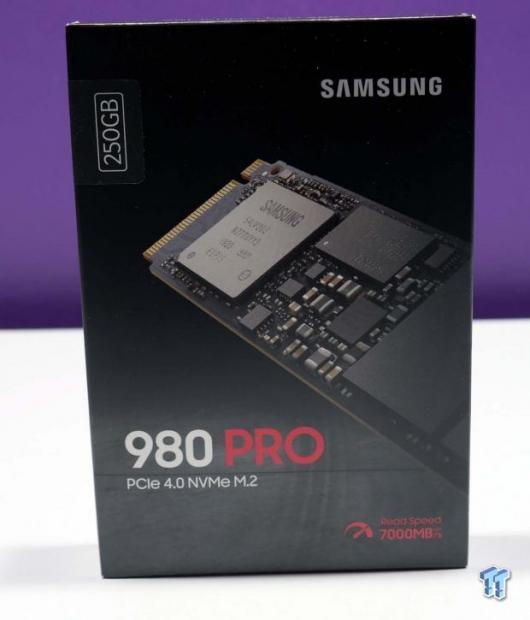 Packaging follows the traditional Samsung box art. We have the model number and performance listed at the bottom, capacity top left. 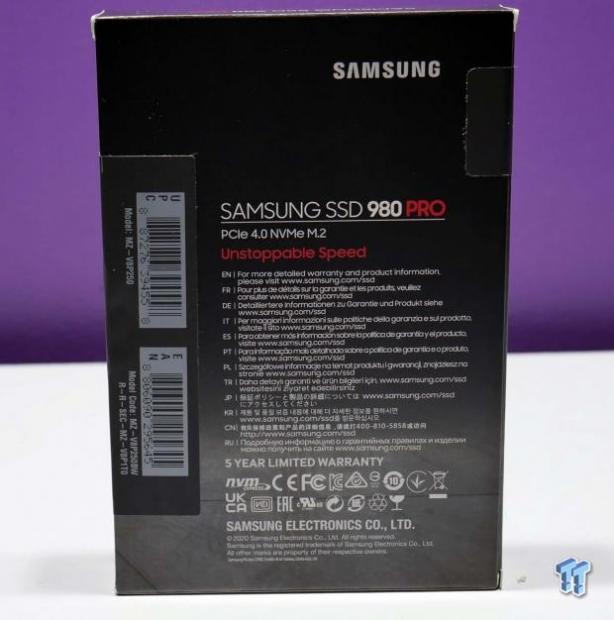 The back goes into more detail about the drive in several languages, with model and warranty information towards the bottom. 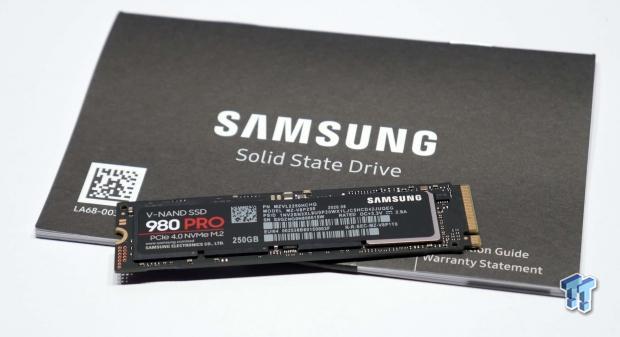 Unboxing, the 980 Pro is delivered with a guide and warranty statement.

The drive itself offers model identification on a sticker placed on the top of the drive. Capacity is listed to the left with the model number, regulatory information to the right.

Removing that sticker, we have the Elpis controller manufactured on Samsung's own 8nm process. To the right, we have 512MB of Samsung DDR4, PMIC below, and two NAND packages top the right of that.

The back has nothing apart from the Samsung SSD branded to the PCB. 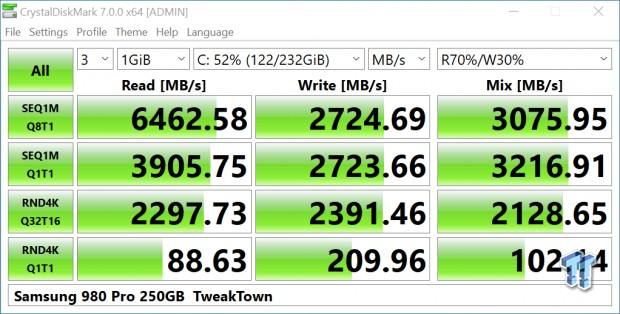 CDM is a staple in performance testing; version 7 has seen some updates in the workloads used for testing. Sequential Read is certainly high for the 980 Pro, reaching 6462 MB/s. Write, on the other hand, isn't too particularly impressive, 2724 MB/s in our testing. 4KQ1 read is once again the best we have seen as of this writing, 88 MB/s, while write comes in at 209 MB/s. 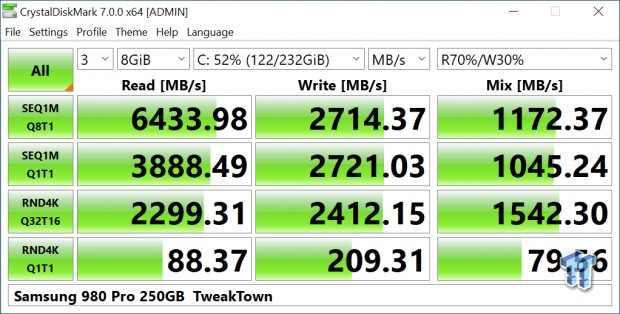 Throwing a larger workload at the 980 Pro produces similar results with only a very small loss of performance. Sequentials still see 6433 MB/s read and 2714 MB/s write. 4KQ1 at 88/209. 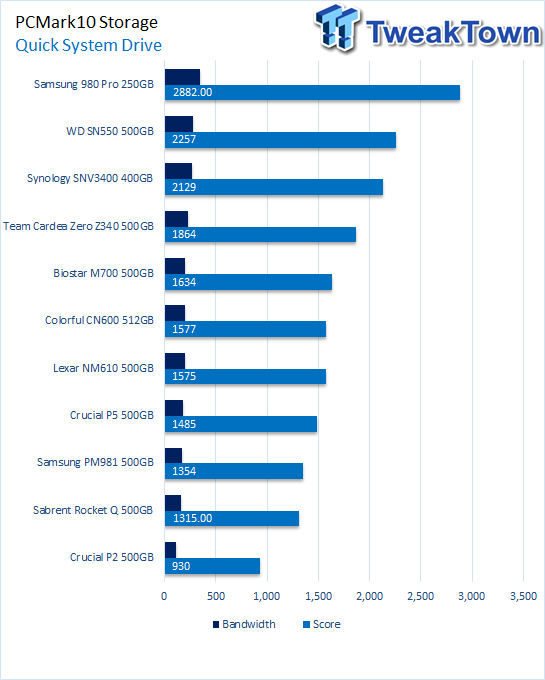 Pushing the 980 Pro through PCMark10 storage testing, we come out with a score of 2882 in the quick system drive test, top of the chart beating the SN550 by ~600 points. 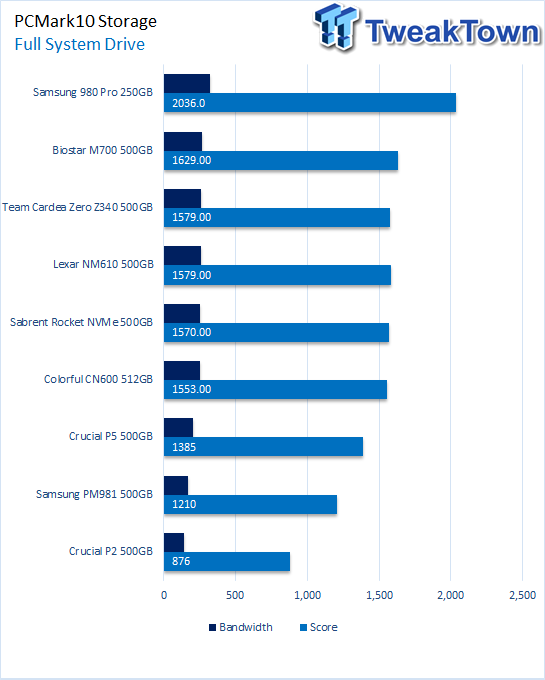 Full System Drive produced a score of 2036, ~400 points better than our next drive in line. 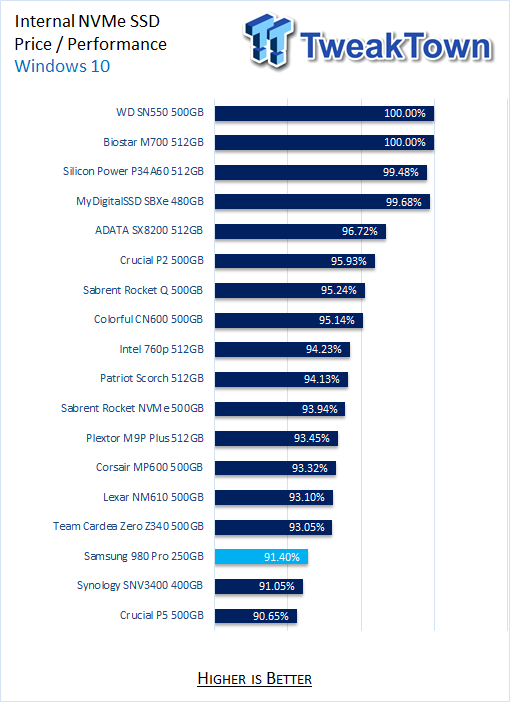 Price/Performance of new technology isn't always the greatest, and the 980 Pro definitely falls into this category. In fact, in the chart above, it lands near the bottom at 91%.

As expected, the Samsung 980 Pro will take the reigns as the quickest consumer NVMe solution we have tested at the 250/500GB capacity. As far as build quality is concerned, we really don't know with only a few days with the drive, but it does look and feel like a pretty solid drive, and we haven't had any issues in the now multiple days of testing.

Performance reaches those headline numbers, 6400 MB/s read 2700 MB/s write and 3000 MB/s 70/30. What really matters to those enamored in the storage industry are the 4KQ1 numbers, and the 980 Pro delivers here too with 88.6 MB/s read with our 250G sample, that's almost 20 MB/s quicker than the next best drive translating to a 5K IOPS increase in performance.

Consumers wanting the very best the market has to offer will certainly want to gravitate to the 980 Pro. It offers class leading read performance backed by a fantastic five-year warranty.