A little over a year ago, the Nighthawk AX lineup was released, so we are a bit late to the party with this review, but alas, we were finally able to get our hands on this unique solution today.

NETGEAR and ASUS are routinely the first two vendors to release wireless router product to the market, ASUS initially carrying Broadcom chipsets and NETGEAR offering Qualcomm platforms. With several ASUS solutions in the charts, it was about time we got a flagship Qualcomm solution on the books, and the RAX120 will do just that.

As mentioned, the Nighthawk AX12 is a Qualcomm-based platform featuring the IPQ8074, a four-core SoC operating at 2GHz. NETGEAR pairs the 8074 with 1GB of DRAM from Nanya and 512MB of flash from Winbond. As for radios, we have two in use for the AX12, the first being a QCN5024 allowing 4x4 2.4GHz throughput of 1148Mbps. 5GHz works on the QCN5054 in an 8-stream configuration, allowing 4804Mbps of throughput. The main 8074 SoC handles both ethernet and switch duties, while a secondary Aquantia AQR111 is included for multi-gig connectivity.

The Nighthawk AX12 is currently available at nearly all online retailers, including Newegg, Amazon, and Microcenter. The MSRP is $499.99 with a two-year warranty. 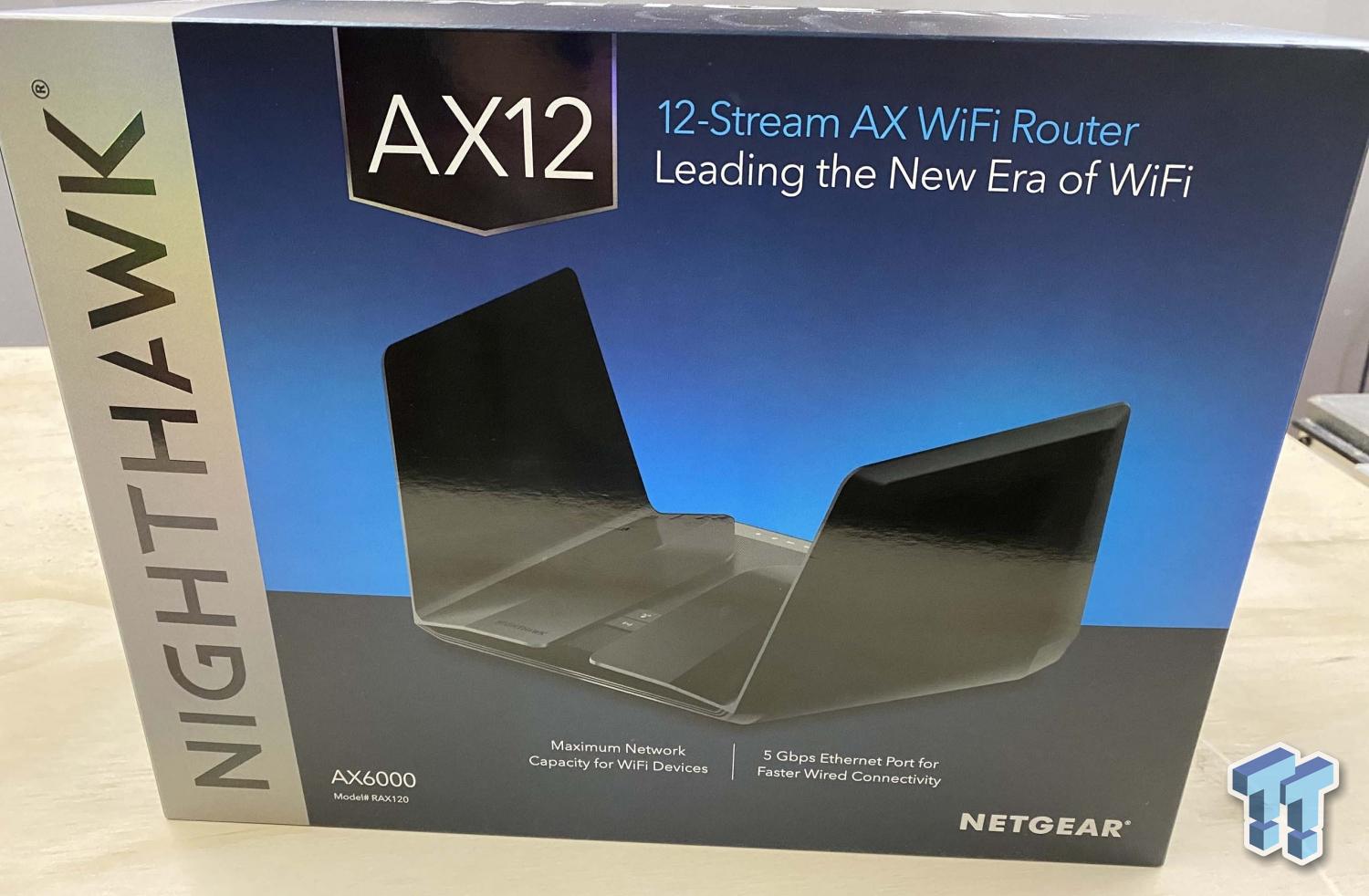 The AX12 arrives in colorful packaging, an image of the router centered with model identification at the top. 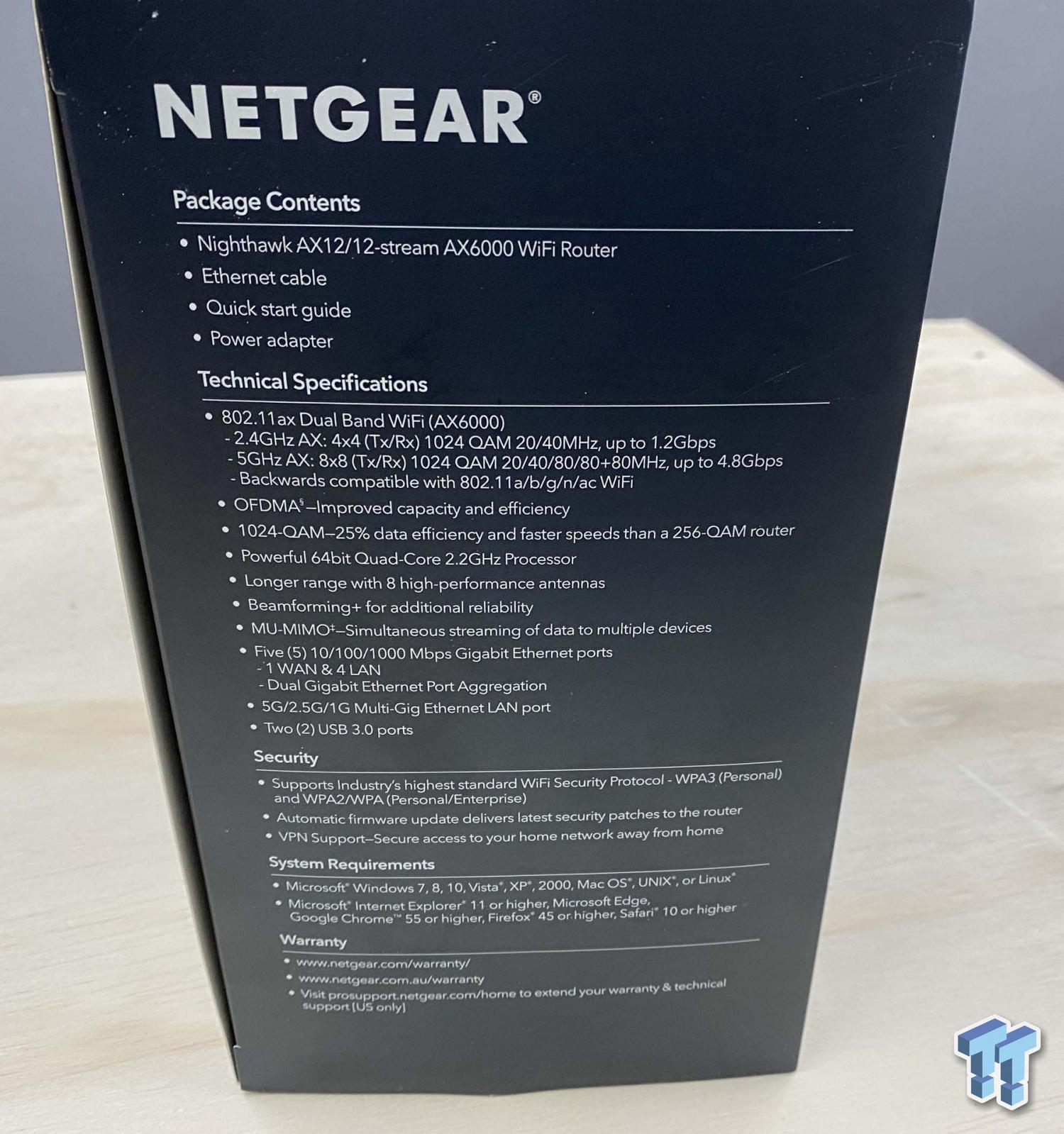 The spine of the box offers full specifications along with package contents and warranty information. 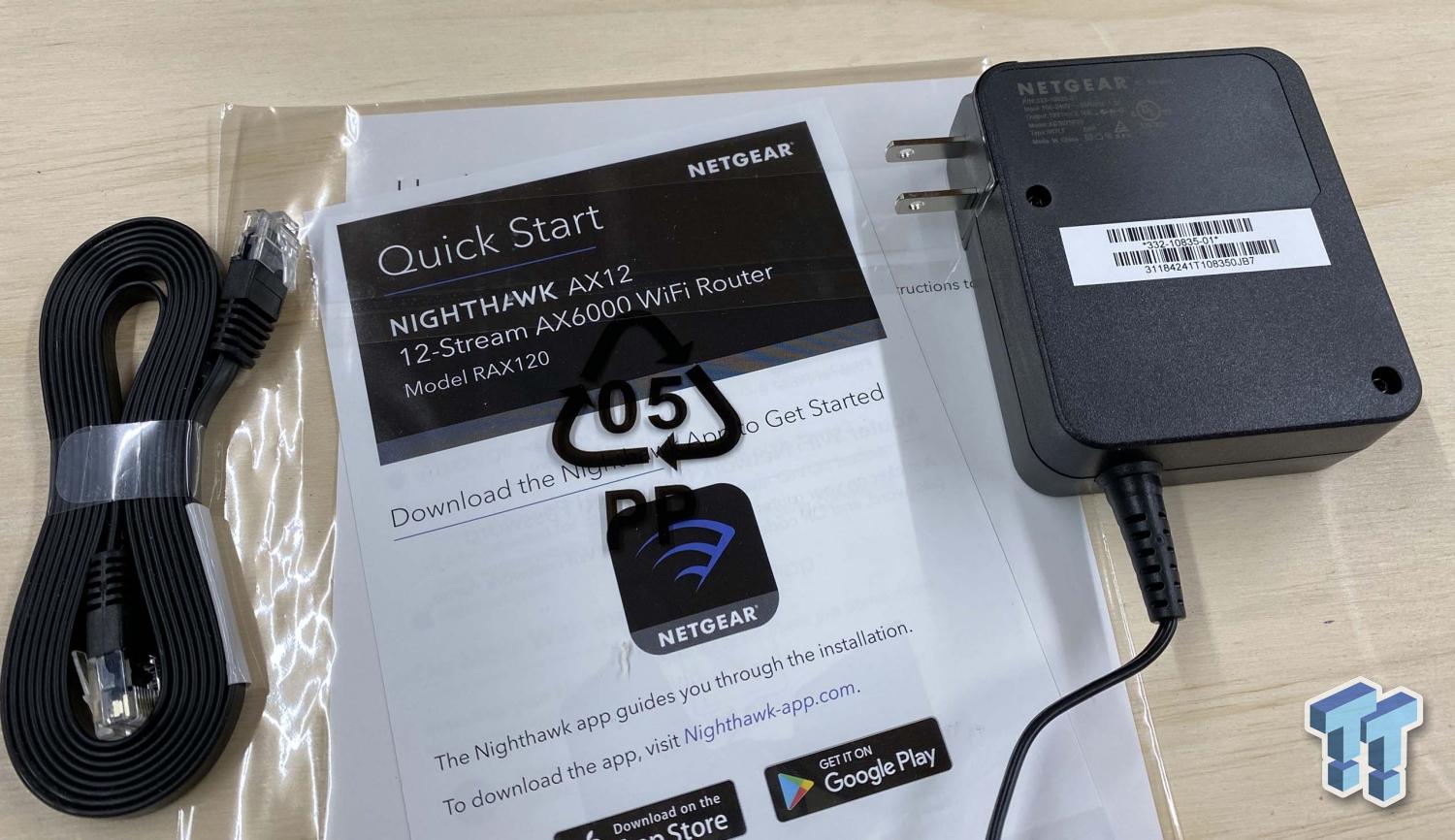 Included with the router, we have the power adapter and ethernet cables and the quick start guide. 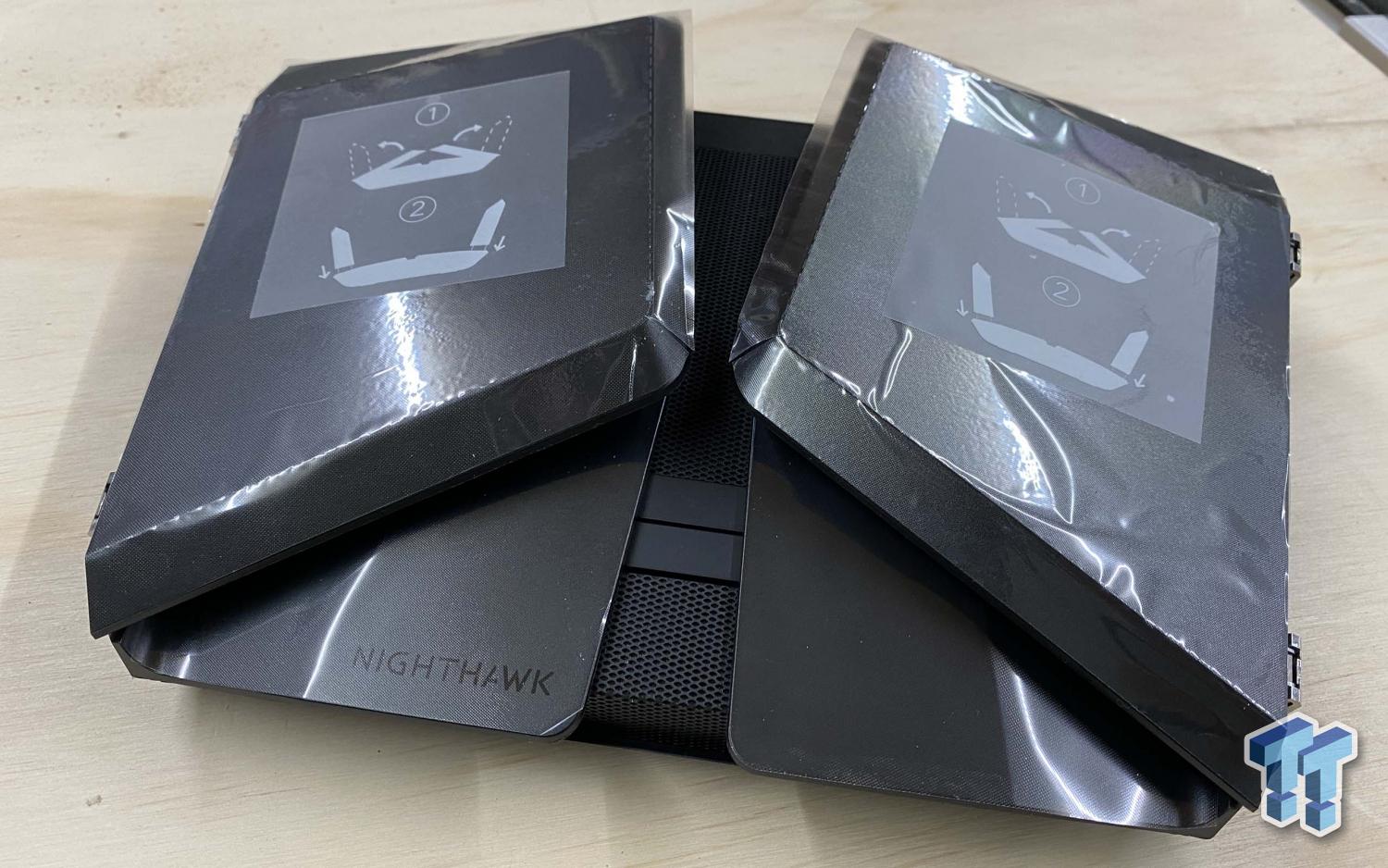 The Nighthawk AX12, and AX8, for that matter, share an Imperial Shuttle design with wings that fold up and down and lock into place. 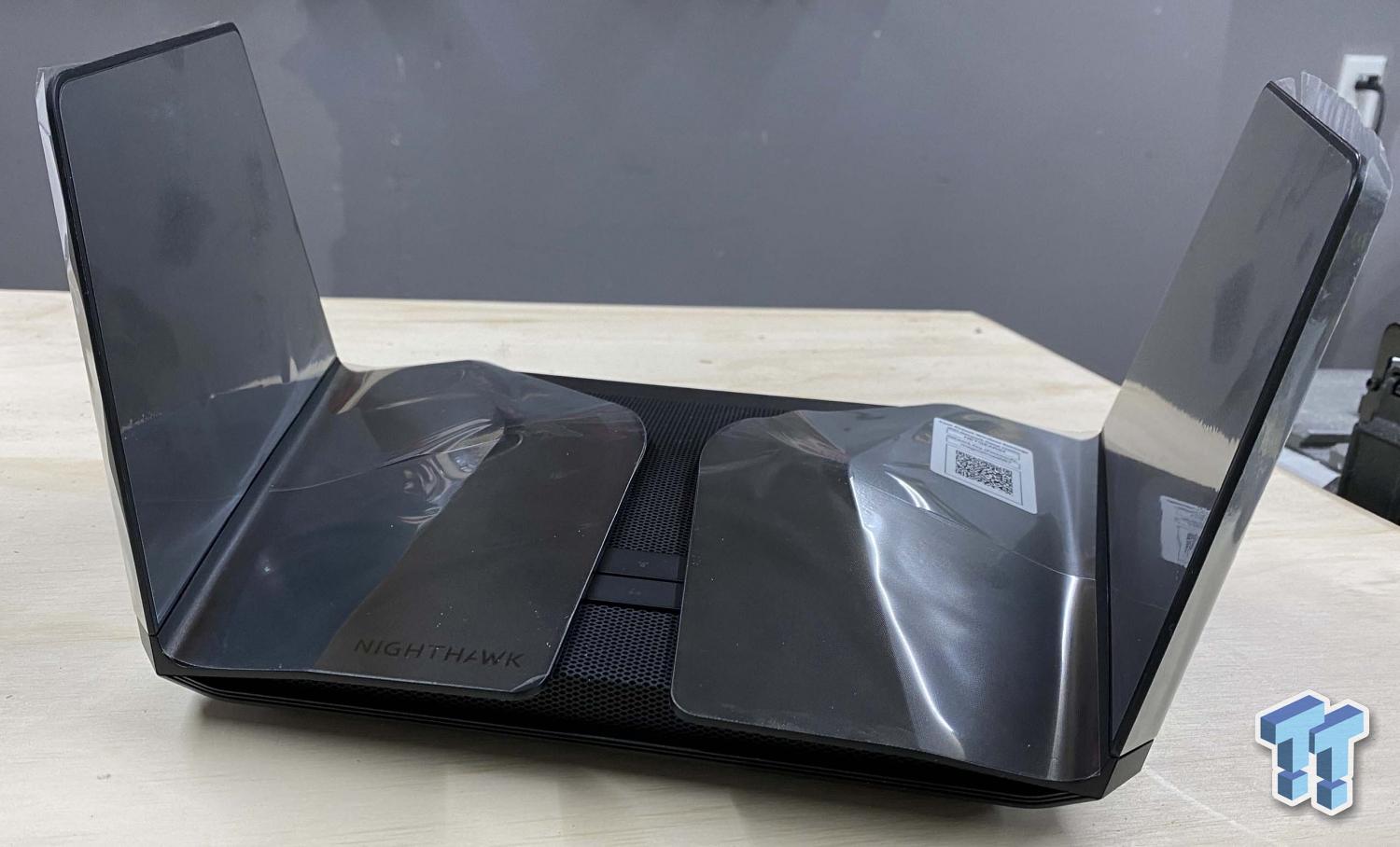 The wings of the AX12 have been locked in opening up the airflow channel that resides down the router's center. We have Nighthawk branding on the left side.

On the backside, we have a stacked lineup of ports starting with the four gigabit ports on the left, WAN, and the multi-gig port that supports 1Gbe through 5Gbe. We round things out with two USB 3.0 and power controls. 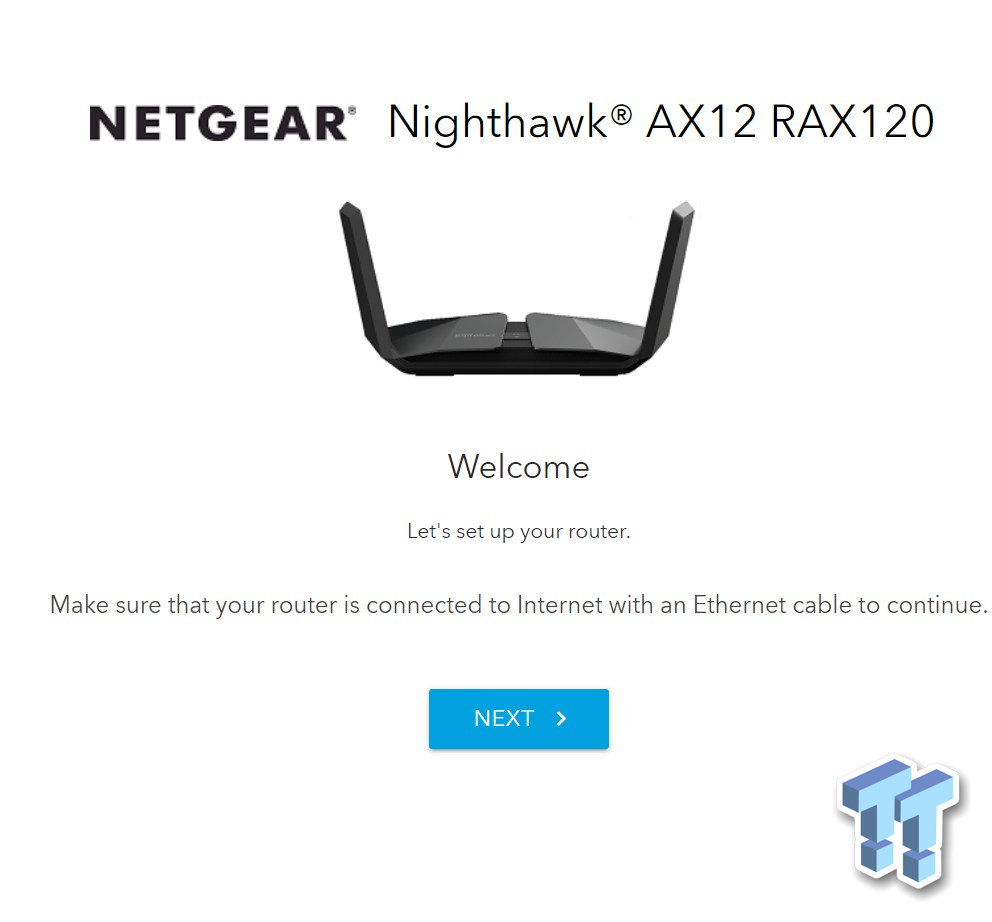 Setup for the AX12 starts with the screen above. 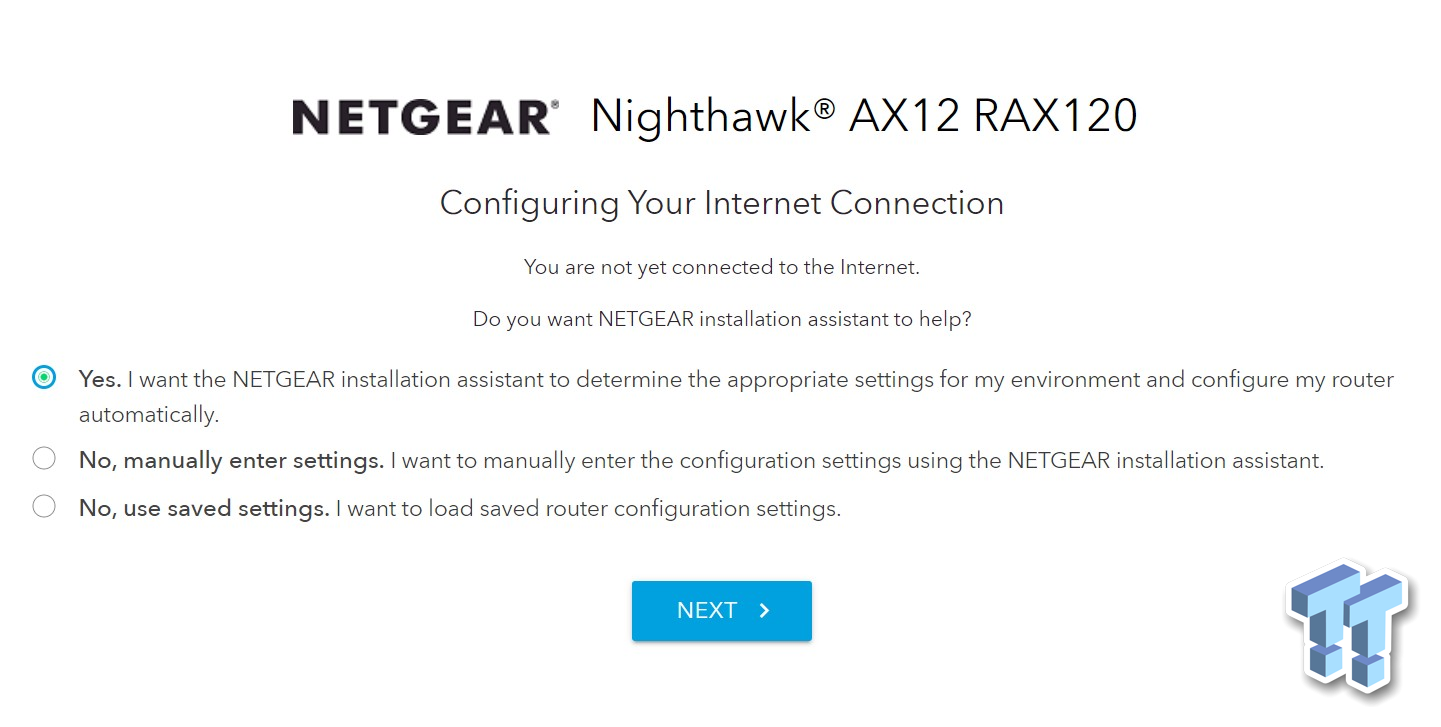 NETGEAR offers several options for going through setup, including an automatic option that is the default setting. 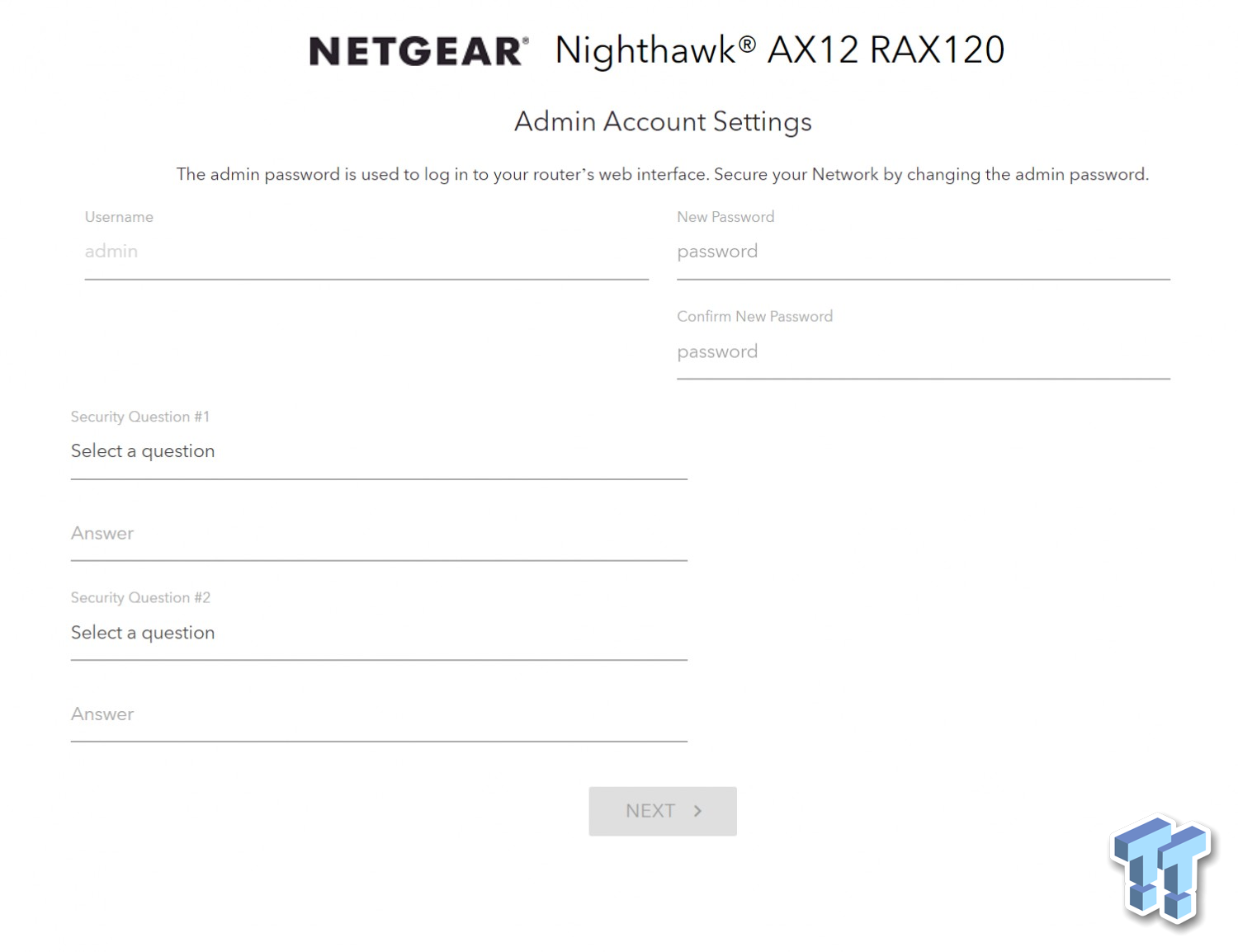 Pushing through setup, we configure the admin account and security for the router. 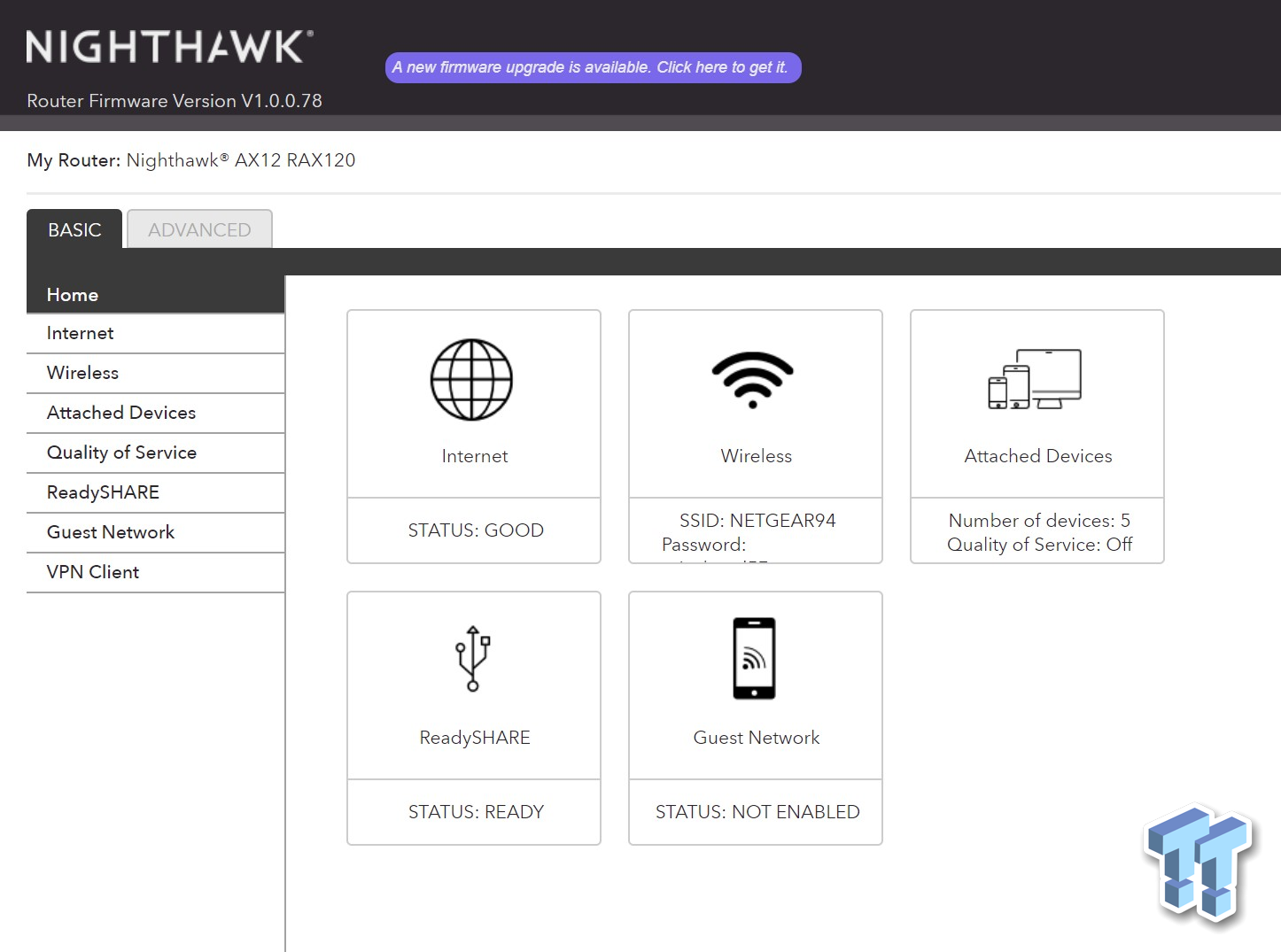 With setup complete, we get our first look at the user interface, with what appears to be a more modern take on the NETGEAR Genie interface we were used to on Wi-Fi 5 solutions. Off the bat, the dashboard gives us a look at SSID, devices connected, and ReadyShare. 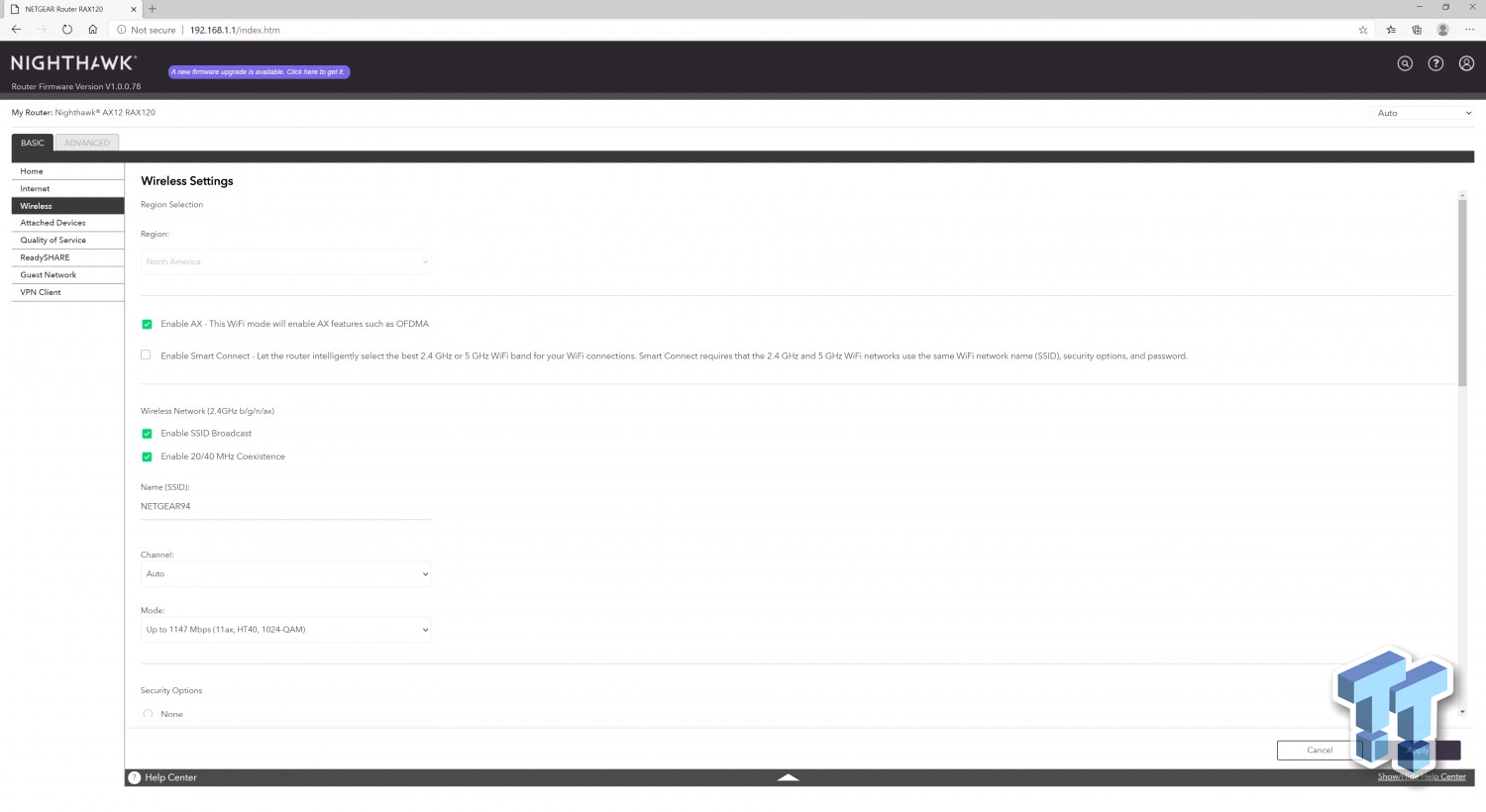 Wireless settings allow you to set up separate SSIDs for each band or smart connect that allows the router to choose a band based on the device. 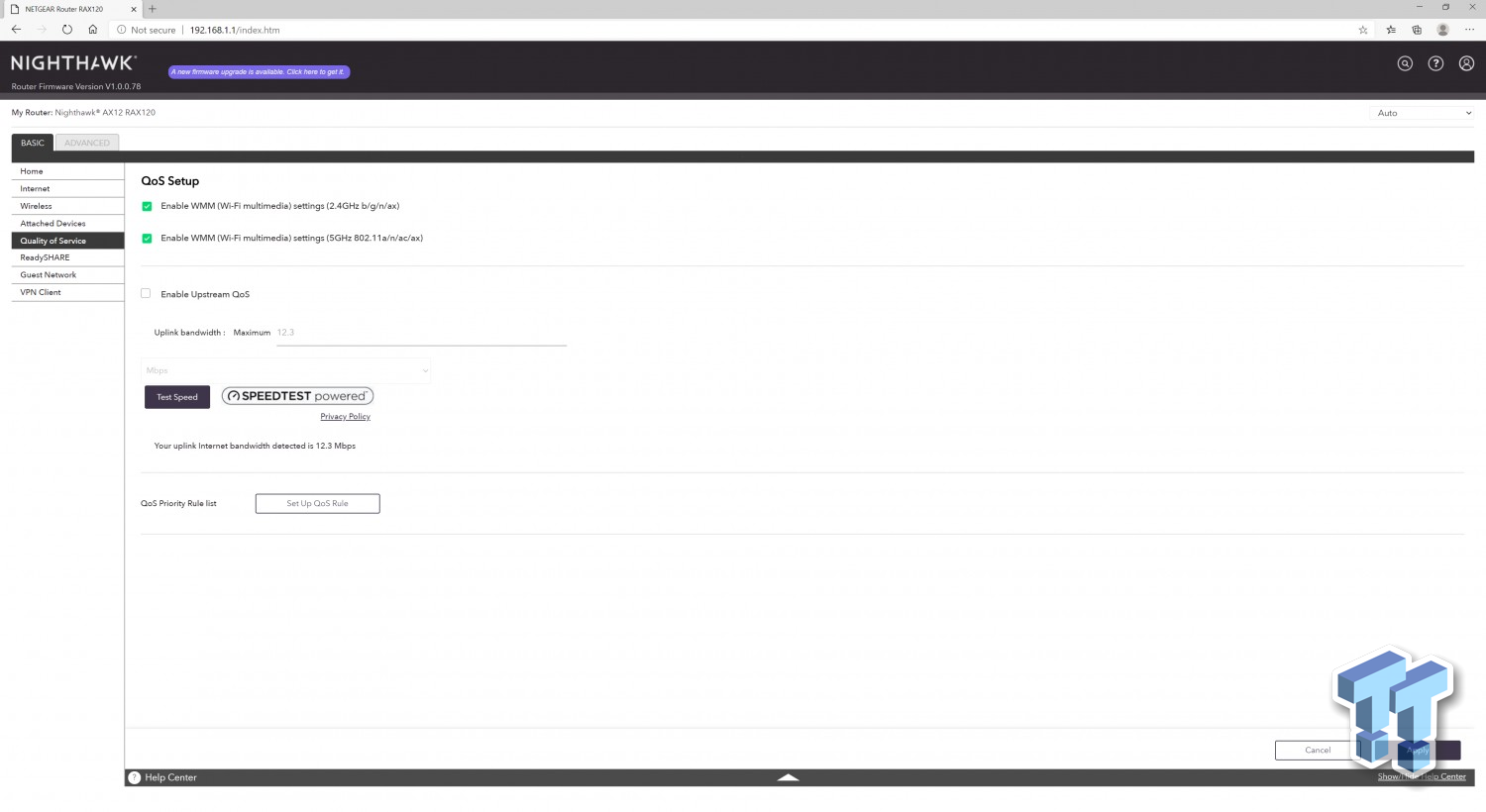 QoS allows you to prioritize devices based on rules and devices. 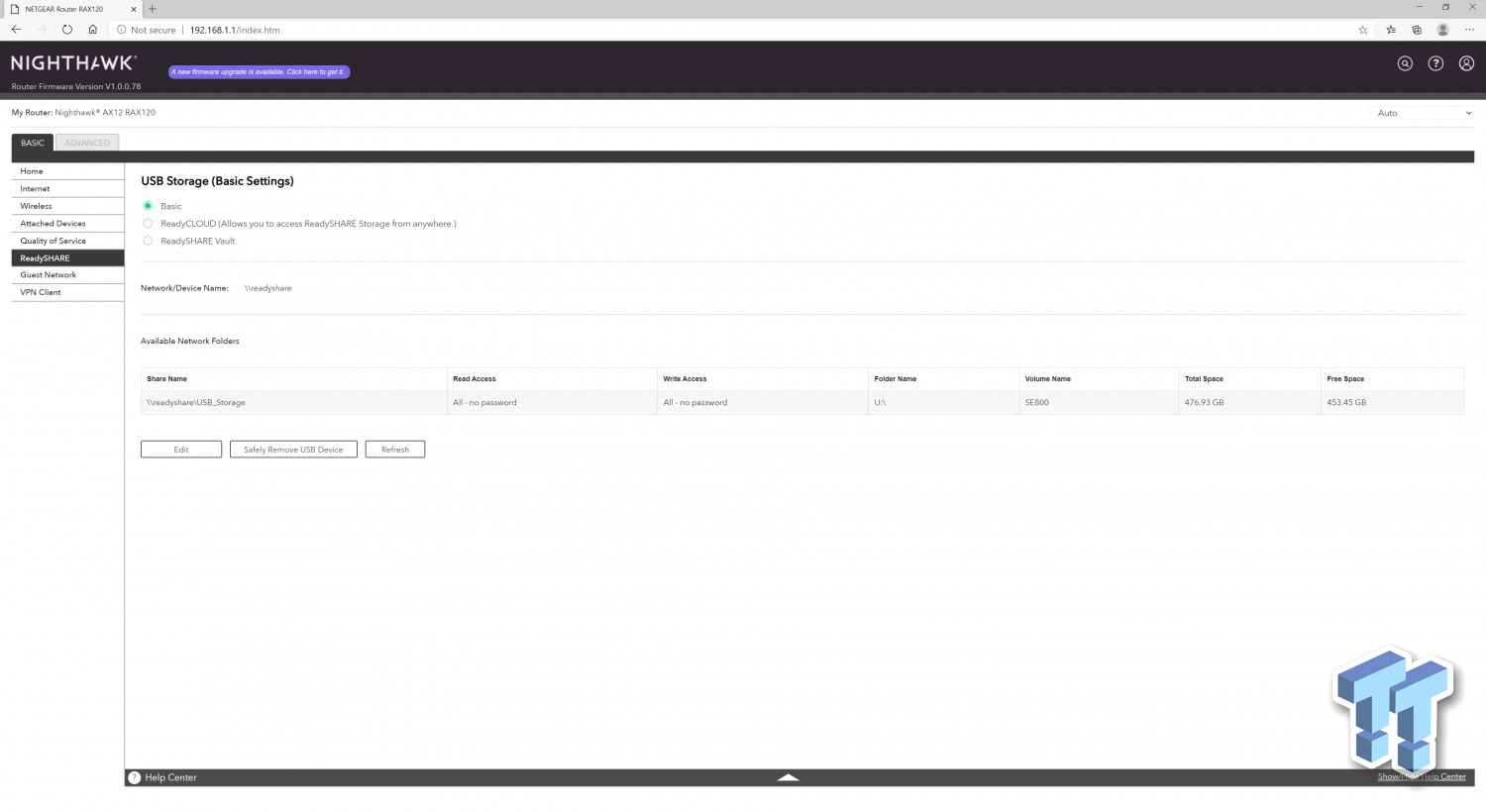 ReadyShare is NETGEAR's onboard storage platform that includes both local and cloud access with ReadyCloud. 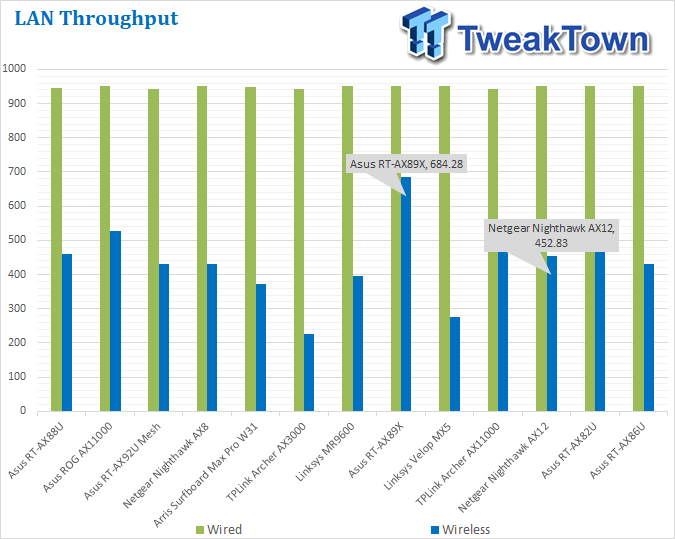 LAN throughput for the AX12 showed 950Mbps for the wired connection and 452Mbps when going wireless to wireless. 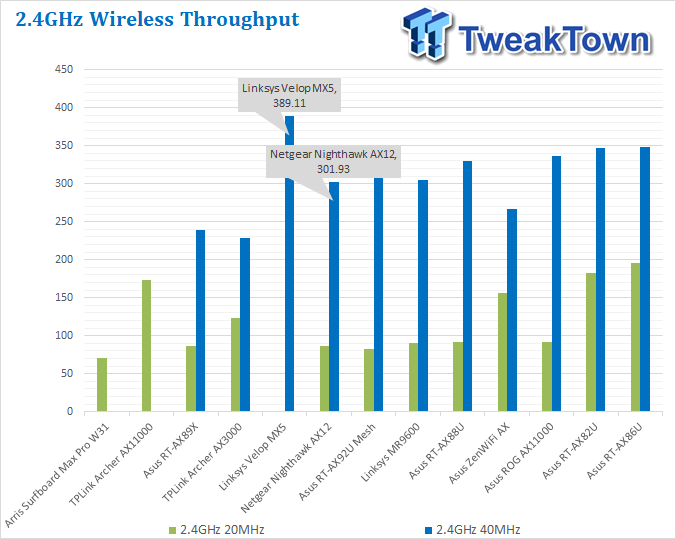 2.4GHz throughput hit a high of 301Mbps using 40MHz channels and a touch under 90Mbps with 20MHz. 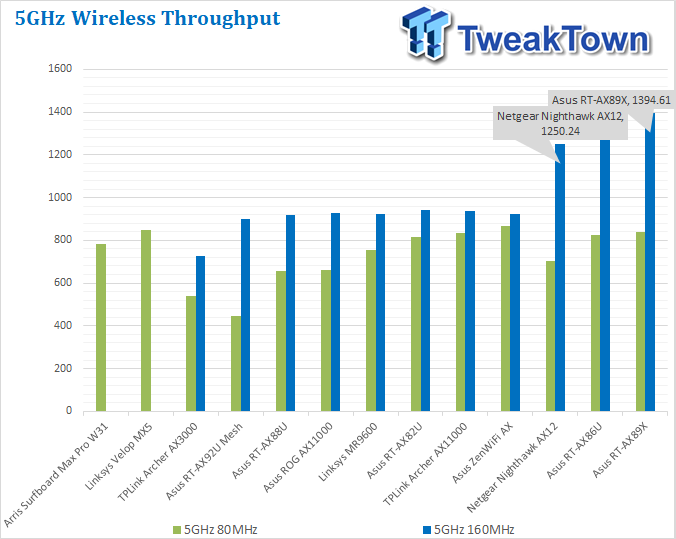 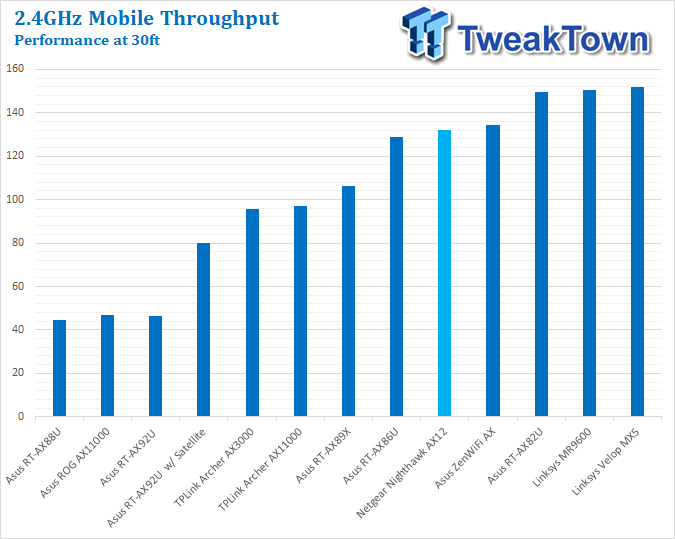 Moving to our iPhone for mobile throughput, the AX12 did quite well, topping 130Mbps at 30ft on 2.4GHz. 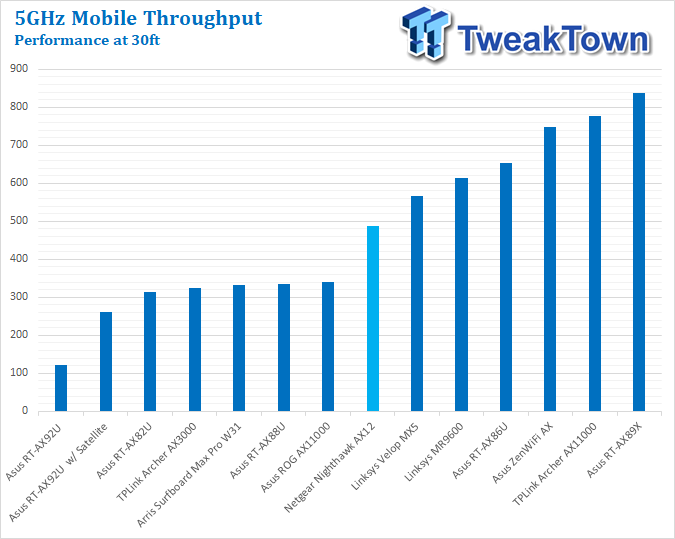 5GHz came in just under 500Mbps at 30ft, middle of the pack in our charts. 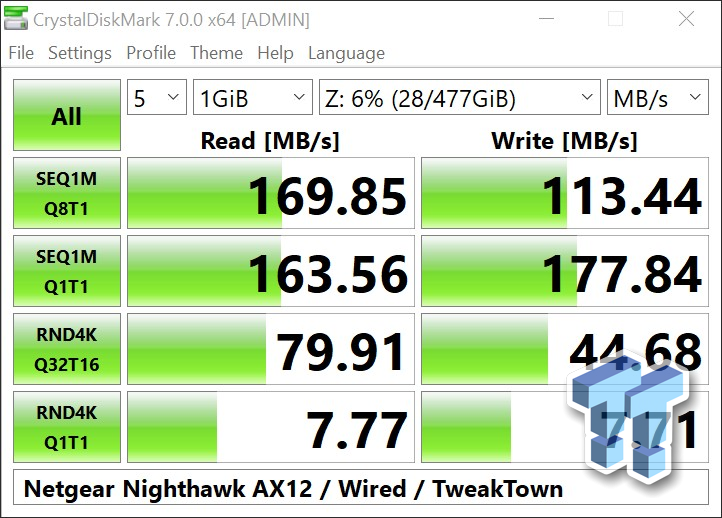 Lastly, we have storage performance, which for the AX12 was remarkably good, reaching 169 MB/s read and 113 MB/s write.

With our first NETGEAR solution tested, the AX12 is certainly a capable flagship solution for NETGEAR, a router that shows off what Wi-Fi 6 is capable of with 12 stream Wi-Fi and Multi-Gig among other features.

Build quality is really good, top-end plastics with excellent fit and finish with just enough LEDs to let you know what's going on and nothing overdone. The hinge mechanism used for the "wings" does feel sturdy, although it technically is the weakest point of the platform.

Hardware choice for this top-end offering is on point and using the aging but proven IPQ8074 that made its name in Wi-Fi 5 solutions like the ASUS GT series and, more recently, this AX12 and the ASUS GT-AX6000 platforms. That said, the DRAM/flash configuration for the AX12 is the first to use 1GB of DRAM paired with 512MB of flash on Wi-Fi 6.

Storage performance sets the AX12 apart from most routers we have tested with 169 MB/s read and 113 MB/s write in sequentials, making this a solid yet basic option for users who want a media server or personal cloud solution without buying into a dedicated NAS box.

With the AX12 being the flagship solution, the AX12 has a hefty MSRP of $499.99 but does carry a two-year warranty. Comparable solutions include the ASUS AX88U or Archer AX6000 from TP-Link.

If you can afford it, the NETGEAR Nighthawk AX12 is a definite winner offering gigabit wireless performance with Multi-Gig and USB 3.2 storage support!