As with all of my headset reviews, I used the ROG STRIX Go for over thirty hours. Within this use time, I had several long gaming sessions bouncing between titles such as Apex Legends, Sekiro: Shadows Die Twice, and Green Hell. I also listened to several hours of music on my PC in wired mode and wireless mode. On top of that testing, I also took the ROG STRIX Go for a walk and plugged the USB-C dongle into my Pixel 3XL.

The first game I played with the ROG STRIX Go was Apex Legends, as I wanted to get a feel for how this 'portable' headset would hold up in a sit down first-person shooter title. I played Apex Legends for about three hours in my first gaming session and can report that the audio was slightly above par from what I was expecting. The highs had a nice ring to them, the mids sounded very crisp and clear, and the lows had a nice punch with the base.

There was also no noticeable delay between in-game actions and the audio coming out of the speakers. As for Sekiro: Shadows Die Twice, each of the sword clashes, blocks, and parries had a super clean sound to them, but for some reason, I noticed a lack in the bass. This could be due to the game, and not the headset, though.

I also recently purchased Green Hell, which is a survival game based in the Amazonian jungle. This game sounded fantastic with the ASUS ROG STRIX Go; all of the bird chirps, native sounds, general music, and construction audio sounded great. I like to get a solid four or five hours of music listening in with whatever headset I'm reviewing, and throughout my experience with the ROG STRIX Go, I was less than impressed. Don't get me wrong, the music quality sounded good, but only in when I was playing music through the wired connection. Playing music through the wireless connection either through the PC, or a mobile device caused the headset to have a static sound at higher volumes. This static sound wasn't present when I used the headset in a wired mode.

Another thing I noticed when I was using the headset with my Pixel 3XL in wireless mode was when I would place my phone back in my pocket; the headset would almost have a mini-disconnect episode. I couldn't figure out what was causing this, but it was only happening in wireless mode. My hunch tells me it has something to do with the headset running on 2.4Ghz, and not Bluetooth, but I cannot prove this.

The ROG STRIX Go actually has two microphones, one microphone that can be plugged in, and another that is located on the headset itself. The microphone that can be plugged into the headset is by far the superior of the two, as it comes with more features and is just overall higher quality. ASUS promotes that the ROG STRIX Go comes with the AI Noise-Cancellation, and I can say right off the bat that this noise cancellation is the best noise cancellation I've used when it comes to blocking out background noise. That doesn't mean it's perfect, though.

If users enable this noise cancellation, your voice becomes super compressed, removing any clarity of each of your words. This is a small price to pay if you have a loud keyboard or environment. As for the microphone that is baked into the headset, the quality isn't nearly as good as the microphone that you can plug in, but I can see how it could be used for people on the go. Overall, it's a passable microphone for portability use. 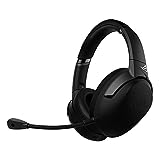