The Elgato Key Light Air is the lighting solution streamers want, but didn't know they needed. Accompanied with more features than expected, streamers won't be disappointed if they chose to purchase one or many.
Buy at Amazon

Today we will take a look at the Elgato Key Light Air, and we will see if aspiring or already solidified streamers need to pick up this latest product from Elgato. Throughout this review, we will be running the Key Light Air through the usual paces of price versus features, usability, setup, design, and software.

On top of that, I will also be giving you my thoughts on if I think the Elgato Key Light Air is worth the price tag of $129.99, or if you would be better off just grabbing some cheap lights from your local store. One thing streamers need is lighting, and Elgato plans on solving that problem with the Key Light Air. The Key Light Air is also compatible with all of the Elgato Stream Decks, so if you already own one of those, you are in luck.

Lighting is crucial for any stream, as no one wants to watch someone sitting in the dark. So, let's see if Elgato's lighting solution is worth sliding that $129.99 over the table, or if it's just worth going and getting some standard lights and saving your money for other components for your set up. First, we are going to jump into the close-up.

Moving on to the back of the box, we can see a more in-depth example of all of the features. We can also note the technical specifications on the bottom right-hand corner.

Next, we have an image of what the Elgato Key Light Air looks like once it's taken out of the box. The unboxing experience was quite mediocre, but then again, the Key Light Air only has a few parts. 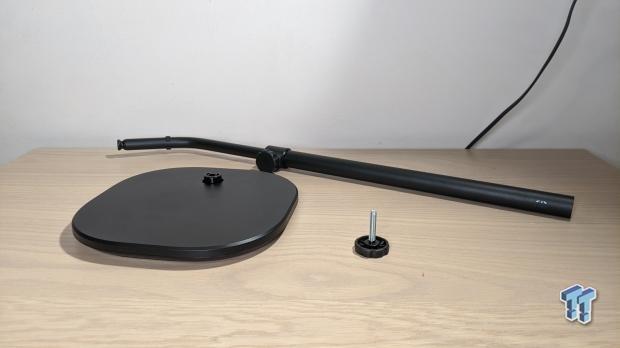 Now we are going to go into how to assemble the Key Light Air, it's fairly self-explanatory, and Elgato's instructions are extremely straight forward, but a small guide is always helpful for those that need it. Starting off, users want to take the pole of the Key Light Air and insert it into the base. Then users will want to secure the pole in using the provided screw. 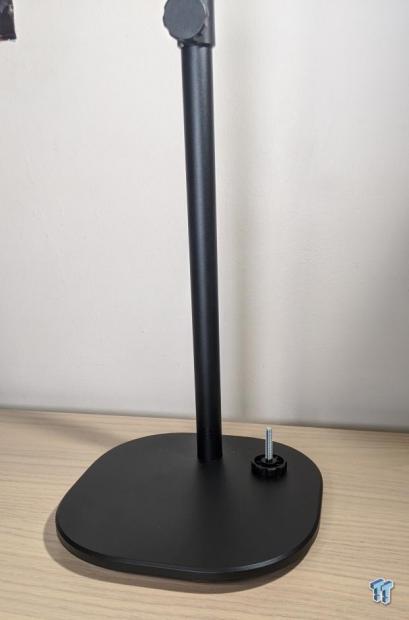 Once that is completed, it should look like the above image (but with the screw tightly located in the base). 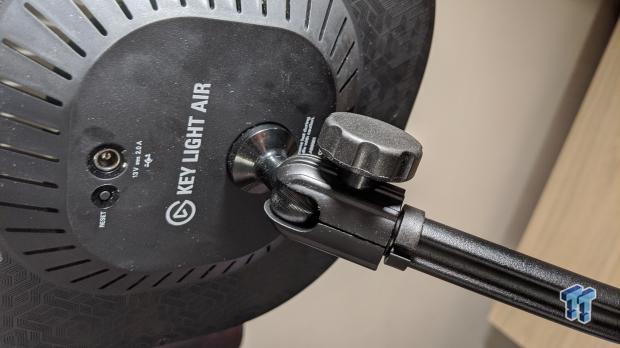 Next, inside the box that is provided in the pack, take out the ball mount and screw that into the head of the Key Light Air. Once that is done, users will have to connect the ball mount socket to the pole and then to the ball that users just screwed into the back of the light. 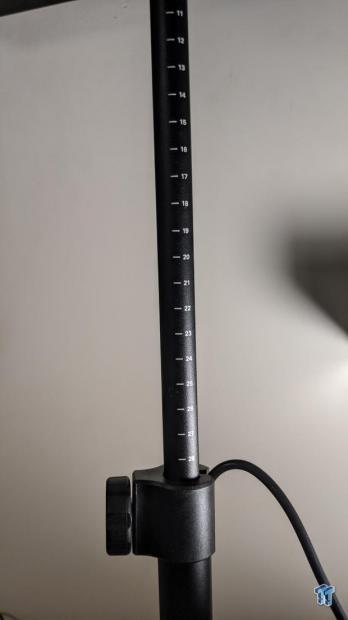 After that is completed, users are 90% the way completed. The above is showcases the height adjustment that can be made to suit whatever kind of setup. The Key Light Air can extend to 28 centimeters, so just change the height to whatever is desired, then tighten with the provided screw located on the pole. 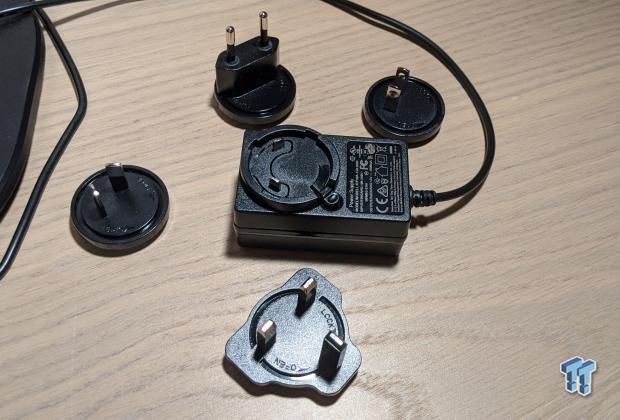 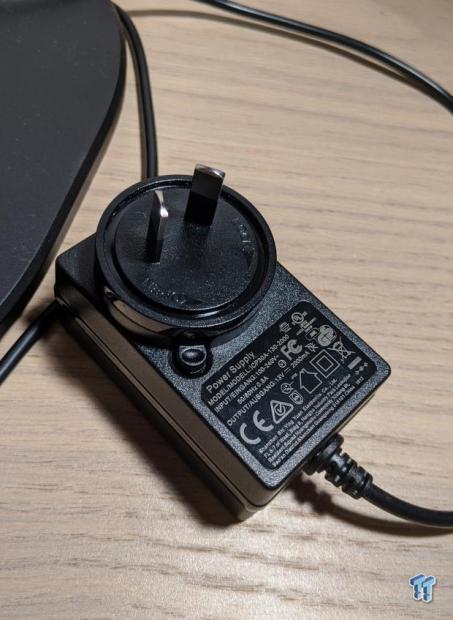 Once users have done that, your power supply should look like the above image.

Next, plug the power cord into the back of the Key Light Air and run the cord down the spine of the pole through the provided grove. This grove is an extremely nice touch by Elgato as it means users won't have to deal with a dangling cord after set up is complete.

Once that step is completed, your Key Light Air should look like the above image. Congratulations, you have just completed set up. 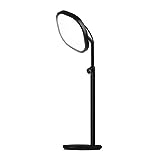 Overall, Elgato has done a great job design-wise with the Elgato Key Light Air. It's slick, minimalistic, and does everything it's intended to do. The material the Key Light Air is made out of is sturdy, has a high-quality feel to it, and doesn't feel like it will break easily.

One of my favorite parts about the Key Light Air is how weighted the base is. Originally this was my main concern with the Key Light Air as I know that gamers tend to accidentally bump their desk from time to time, which can cause some wobble for objects on the desk. If the Key Light Air didn't have the weighted base that it does, it would certainly fall over, but Elgato has thought ahead in this regard and well done to them for that.

Assembly wise, Elgato has really made things as simple as possible for users. Honestly, assembly for the Key Light Air takes less than fifteen minutes, and this is thanks to Elgato's step-by-step guide. All of the parts that are required for assembly feel high quality and slide right into place without any hassle. Overall, I'm very, very impressed by the Key Light Air assembly, and Elgato should be proud of what they have done here.

As for improvements on the design side of things, I have used the Key Light Air for around twenty hours or so, and I can think of some things I'd like changed or added to. The power cord for the Key Light Air is only a 195cm long, and since I have a standing desk with my power board located on the floor, it makes it impossible for me to have my Key Light Air on the desk while I'm in the standing position.

While this might sound like a small problem, I know that some streamers have standing desks, and not having a power board on your desk might mean that they won't be able to use the Key Light Air without getting an extension cord. I'd like to see Elgato extend the power cord in future Key Light products, as I think doing this would mean the light would become more versatile for more user setups.

First off, make sure you have completed the assembly part of the Key Light Air, and make sure it's plugged into a power source. Once that is completed, and the light is in position, head over to the Elgato website, and download the Elgato Control Center. 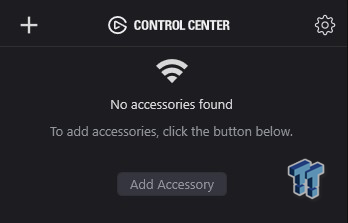 Once you have downloaded the Elgato Control Center and installed it, you will be presented with the above screen. From here, you want to click on the add' accessory button', and then the control center will begin searching for your Elgato Key Light Air. The Elgato Command Center will ask you to enter your Wi-Fi security key, and once you have done that, it should be connected, and your set up will be complete. 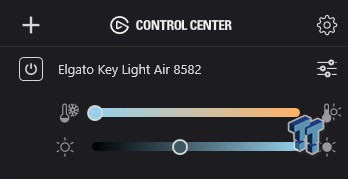 Once the Key Light is connected, you should see the above image. From here, you can change the temperature of the light, which slightly alters the color, as well as change the overall intensity. Since every user's set up is different, and each user has a different camera, you will need to tweak the settings of the light to best fit your situation.

For my set up and my camera, I put the Key Light Air at around 30-40% brightness (depending on the time of day) and kept the temperature at 7000K.

So how good is the Elgato Key Light Air? Well, for its price of $129.99, buyers will be getting an easy to set up light that has much more control and features than a cheap light. If you are a streamer and are considering getting into the streaming game for the long haul, I would definitely recommend the Key Light Air as a long term investment.

It might be a bit pricey at first glance, but for the features it gives you, it's more than worth it. My reasoning behind this can be boiled down to one word, versatility. Since the Key Light Air's settings can be tweaked via your PC or phone, it will be great for every gamer's set up. This gives the Key Light Air an advantage over traditional lighting setups, which might have restrictive lighting control. 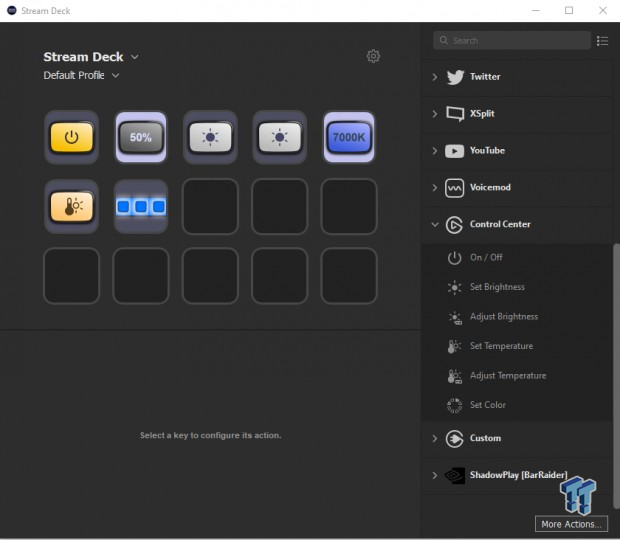 Having all of the Key Light Air's features within a physical arms reach makes using it satisfyingly smooth. Owning a Stream Deck also means that users won't have to use the Elgato Control Center, as all of the options that would originally have to be tweaked on the PC/mobile app will be on the Stream Deck instead.

The Elgato Key Light Air's minimalistic design, easy setup, and simple, yet effective features are what make it an extremely worthwhile product for streamers.

There isn't that much that isn't great about Elgato's Key Light Air. But, if I was to cherry-pick some aspects of it, I'd say the following. A longer power cord for streamers who have standing desks and have their power boards on the floor and a slightly less tighter groove so when height adjustment is happening, users don't have to take the cord out of the groove.

So, let's wrap this up. Is the Elgato Key Light Air worth it? Well, it depends on how much money you are willing to spend and how dedicated you are to streaming. If you are a streamer who is thinking about streaming for a while and taking things a bit more seriously, then yes, the Key Light Air is definitely worth it.

After the simple set up of the Key Light Air streamers will quickly realize that their lighting problems have been solved, which is exactly what Elgato set out to do with the Key Light Air. On top of that, if you are a streamer that also owns an Elgato Stream Deck, then you will get a much better experience out of the Key Light Air as all of its features will simply be within an arms reach.

But, if you are just a casual streamer looking to get a bit better lighting for your set up, and don't really want to be spending a large amount of money, then I wouldn't recommend the Key Light Air. I would recommend just some cheap and simple standing lights. They will still make a world of difference on camera.

Overall, if Elgato's mission was to solve the lighting problem that streamers have, while also throwing in some additional usability features, then they have definitely completed the mission with flying colors. The Key Light Air only has few downsides, but those downsides are outweighed tenfold by its positives. Fantastic work Elgato, I cannot wait to see the next-generation of the Key Light.

The Elgato Key Light Air is the lighting solution streamers want, but didn't know they needed. Accompanied with more features than expected, streamers won't be disappointed if they chose to purchase one or many.