FSP is a company that we have reported on several of their power supplies to date, and today is an interesting one. FSP makes power supplies in various sizes and capacities, including large full ATX sized supplied, including even a liquid-cooled unit with the Hydro TPM. They also offer PSUs such as the Dagger Pro SFX which we recently took a look at. Today we are looking at the new FlexGURU 300W from FSP, and this is a bit more unique of a form factor then most are used to or even aware of.

The FlexGURU is of the Flex ATX form factor, which is a quite small yet long form factor which is used prominently in servers via redundant PSU installations. This similar form factor is what the FlexGURU uses, and while it's not a hot-swappable unit like you may find in many servers, it shares a similar small rectangular form factor. There are some Chassis which can fit Flex ATX, but they are few and far between. Here is a PC Part Picker list which is one of the best I have seen that show Flex ATX PSU compatible chassis. As you can see, most of the chassis is small HTPC/SFF cases, which is what the Flex ATX PSU was ideally made for. There have been Flex ATX PSU's for quite a while, but most users would never notice as they came imbedded in the chassis such as is the case with EVGA's Hadron chassis.

Now let's take a look at some of the selected features of the new FlexGURU given by FSP.

This feature set is good, and some of it I take a slight issue with, such as the "fully modular design," which is partially true. All of the cables can be removed, but as you will see shortly, the peripheral cable is a single unit, so if you need any SATA or PATA ports, you will have all of them there anyway. Also, the fact that the Japanese made electrolytic capacitors are called out specifically. It makes me wonder if the solid state capacitors are indeed Japanese or only the electrolytic units. The stated 90% typical efficiency checks out mostly as that loading range where 90%+ is said to reside would be around the scale that an APU/iGPU chip can pull under load.

The FlexGURU 300W carries a part number of FSP300-57FCB, and the FlexGURU also comes with a lower 250W rated model as well. The FlexGURU measures in at 150mm in length, 40.5mm width, and 81.5mm height. There are much longer versions of Flex ATX units on the market, but most of them have the cables soldered to the supply and are not at all modular.

Here we have the output table for the FlexGURU; the FlexGURU is not designed for high-end multi GPU systems. It has enough amperage to support a reasonably small form factor system and potentially could use a PATA to PCIe adapter if using a discrete GPU.

Lastly, we have the Efficiency and acoustics chart supplied by FSP. The efficiency chart shows at very low 10% loading, such as an idle desktop load with an APU, you will see close to 80% efficiency. However, once you reach what they call "typical" loading, we see the unit comes up to over 90% efficiency and hovers just around or slightly below 90% at full loading.

The price point for the FlexGURU 300W is $84.99, and the lower 250W rated model comes in at $74.99. Today we will focus on the comparison of what we have on hand. There are not many other modular Flex ATX PSUs, so that makes these unique. However, for the sake of comparison, we will look at similar wattages and connector arrangements to compare the competitiveness of the price as well. The unit closest in price and wattage to the FlexGURU that has modular connectivity is the Seasonic SSP-300SUG.

The Seasonic unit is listed as an industrial unit and looks like it belongs more in line with a miniature server or slim form factor PC vs. the FlexGURU which has a black casing and may fit a little better as far as style points. The FlexGURU also has more available peripheral connectors (PATA), which can potentially be used to power a GPU via adapters, whereas SilverStone only has a single PATA. It will be interesting to see if the FSP FlexGURU can indeed power a GPU off of the PATA leads with stability as that may open this unit up to usage for an SFF or ultra-compact mild gaming system. 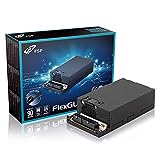