Intel's 9900K has reigned at the top of the gaming CPU charts for a long time, and today we meet its successor, the 9900KS. The 9900KS is designed to boost all cores to 5GHz, which is very similar to a 9900K with multi-core enhancement turned on.

While the 9900K boosts an all core turbo of 4.7GHz, the 9900KS has the same boost for single and multi-core turbo, which isn't something I have personally seen before. Intel dubs the CPU as the world's fastest gaming processor, so today we will put that to the test. 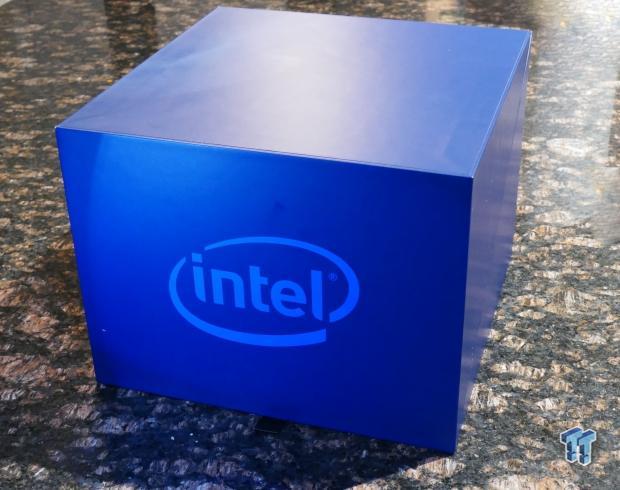 For the first time in a long time we know the exact turbo table from Intel, directly from Intel, the CPU runs at 5GHz all core Turbo. The CPU has eight cores and 16 threads, and it has a TDP of 127W, which is much higher than the 95W TDP of the 9900K. It also has 16MB of Smart Cache, and is identical to the 9900K except for a 400MHz higher base clock at 4GHz, and a 300MHz higher all core Turbo at 5GHz. 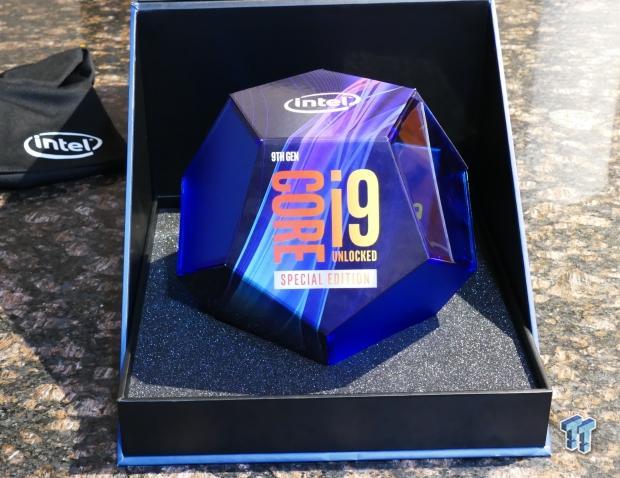 The box for the CPU will come as a dodecahedron only, the external box you see here is just part of the reviewer's package. 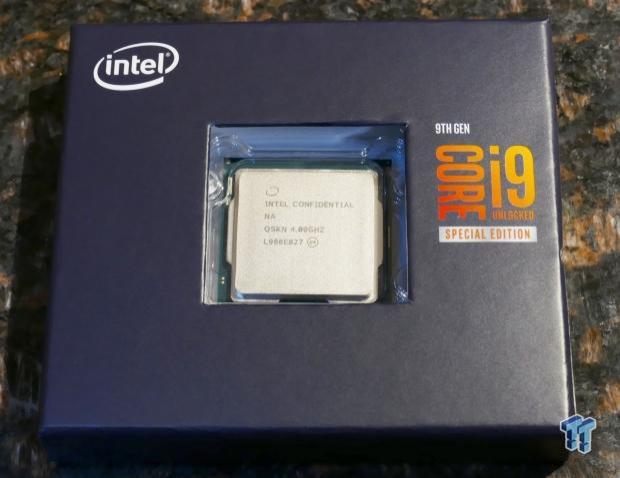 There is a small box inside the 12-sided box, and it holds the CPU and warranty information as well as case badge, although ours did not come with those since it's an engineering sample. 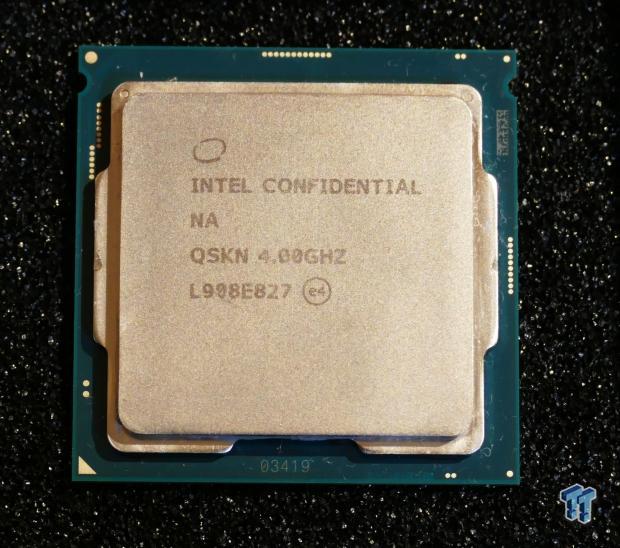 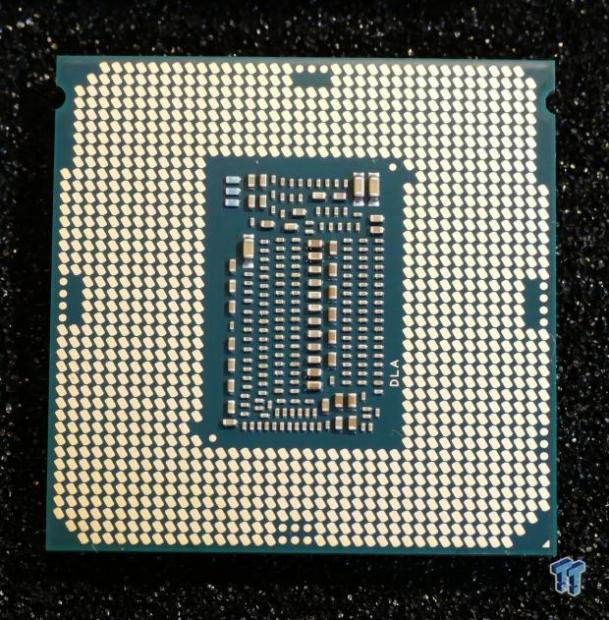 The top and bottom of the CPU are pretty much identical to those of other LGA1151 CPUs. 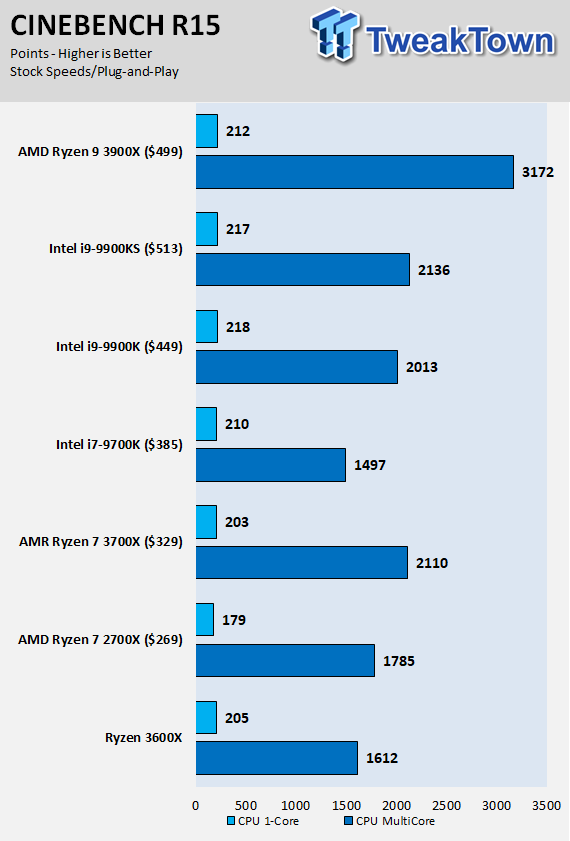 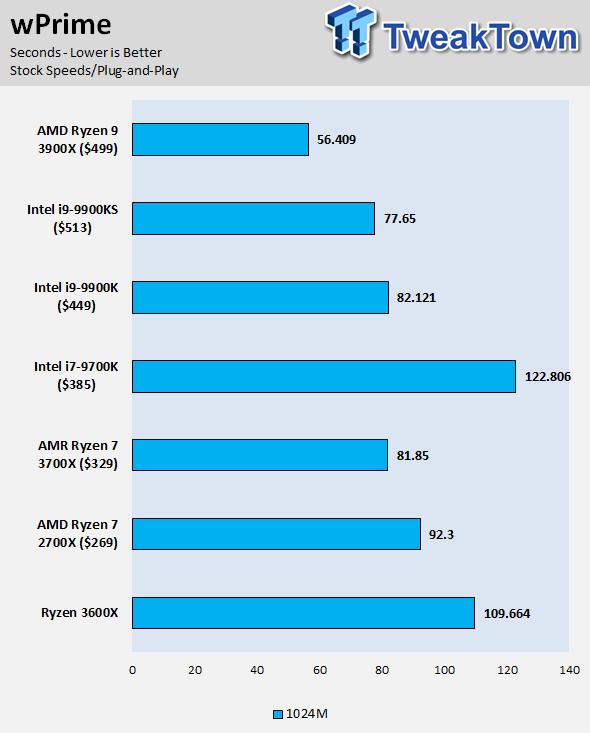 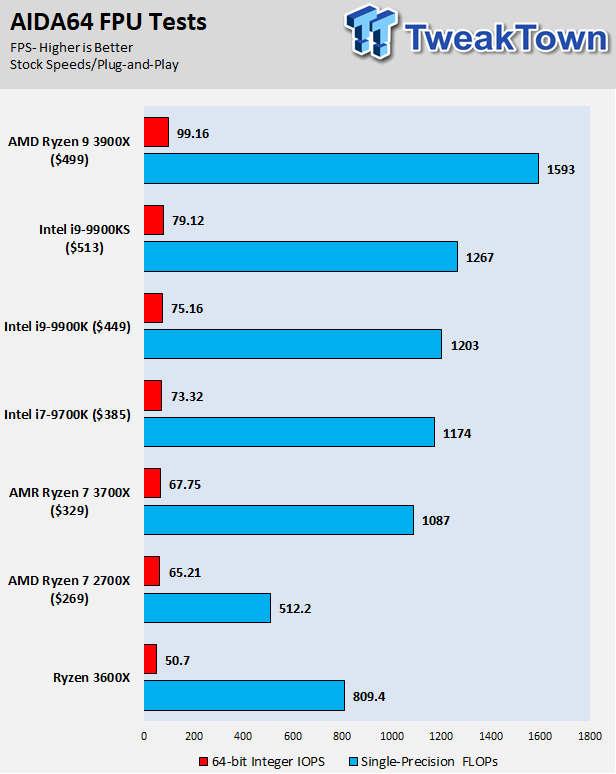 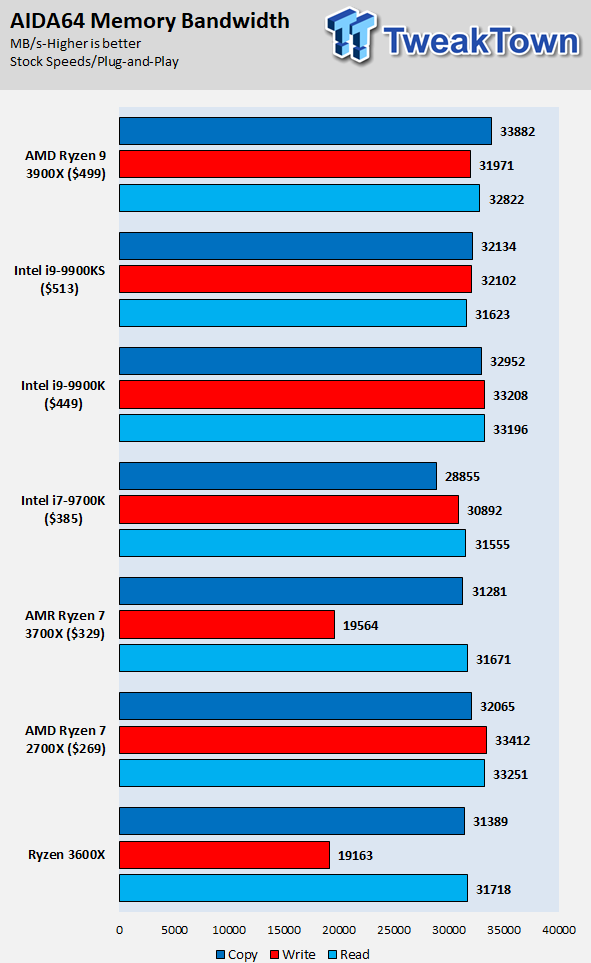 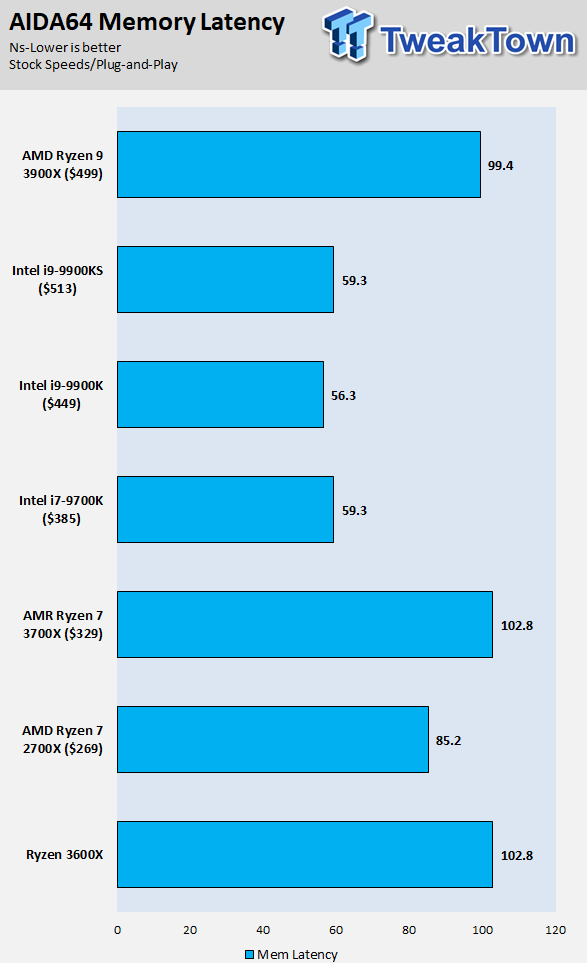 Let's put things in perspective first; the single core Turbo of the 9900K and 9900KS are the same, but the all core turbo is 300MHz lower on the 9900K. The 300MHz difference is a 6% increase in frequency over the 9900K, and we see that almost perfectly reflected in CINEBENCH and wPrime, but that makes a lot of sense because they are all core benchmarks that put a 100% load on the CPU. We see some gain in FPU tests, memory is mainly untouched. 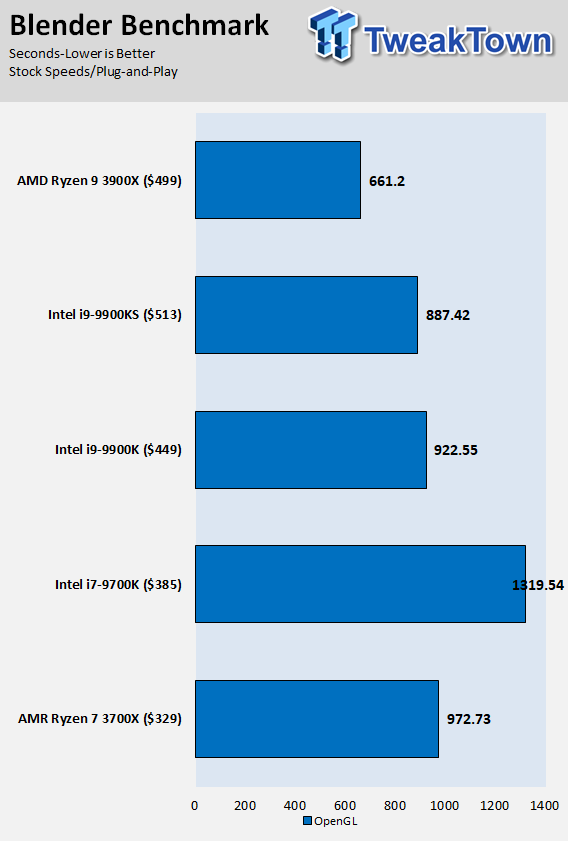 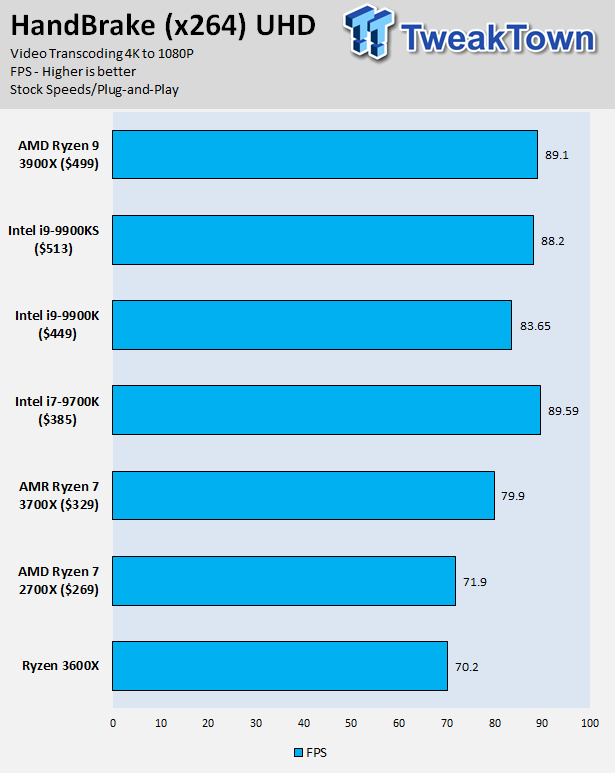 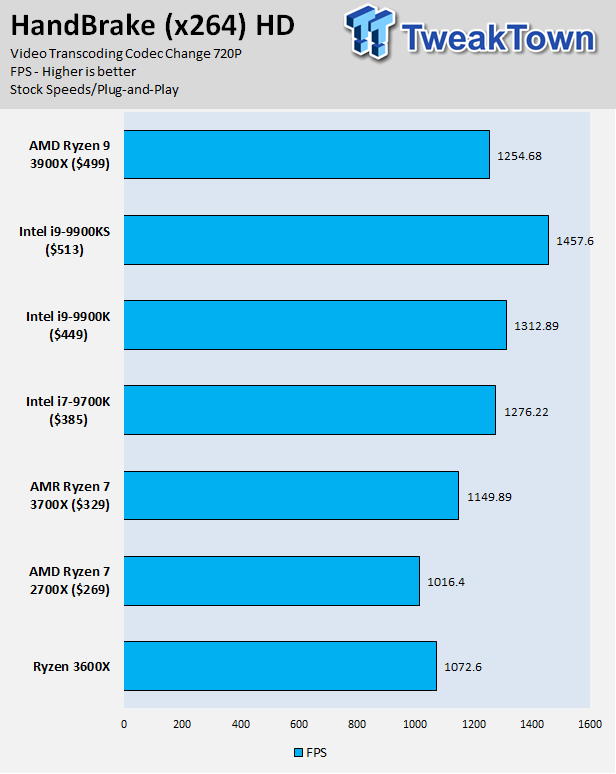 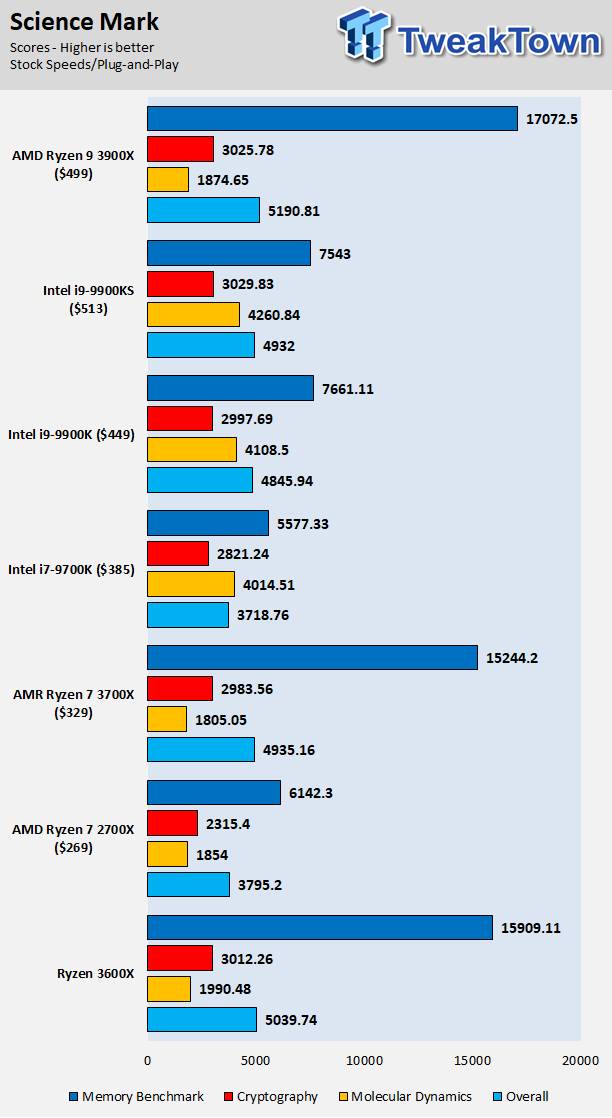 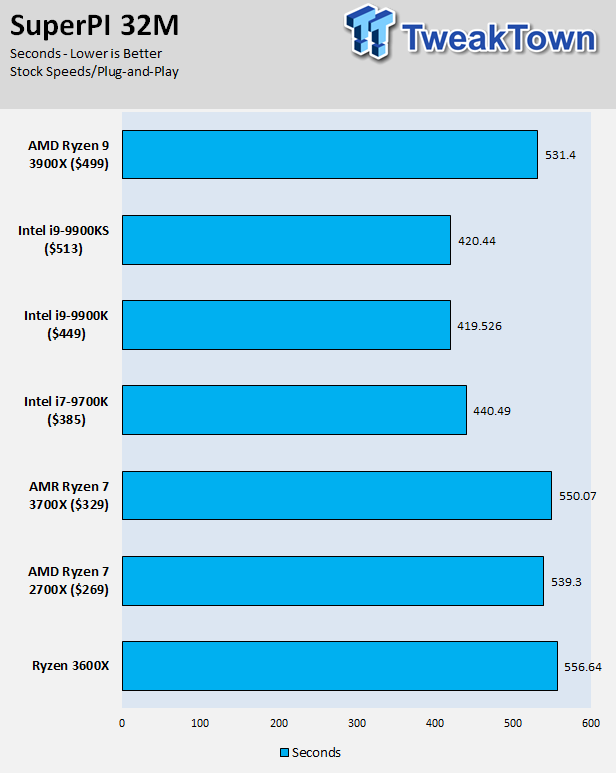 While the HandBrake was close in regards to HandBrake changing video formats, we see Intel really pull ahead with the 9900KS. We see minor improvements in ScienceMark but nothing to write home about. We aren't surprised there is almost no change in SuperPI, as it's single threaded and the 9900K and 9900KS have the same 5GHz single core turbo. 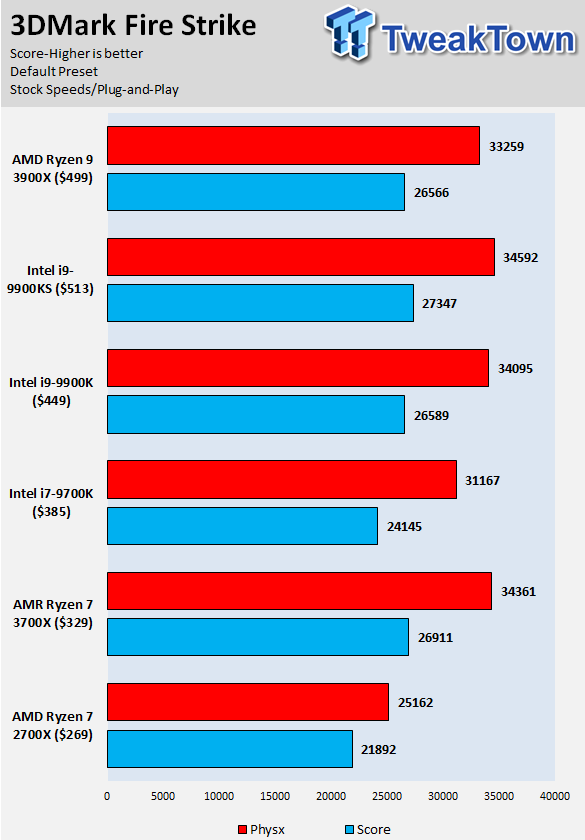 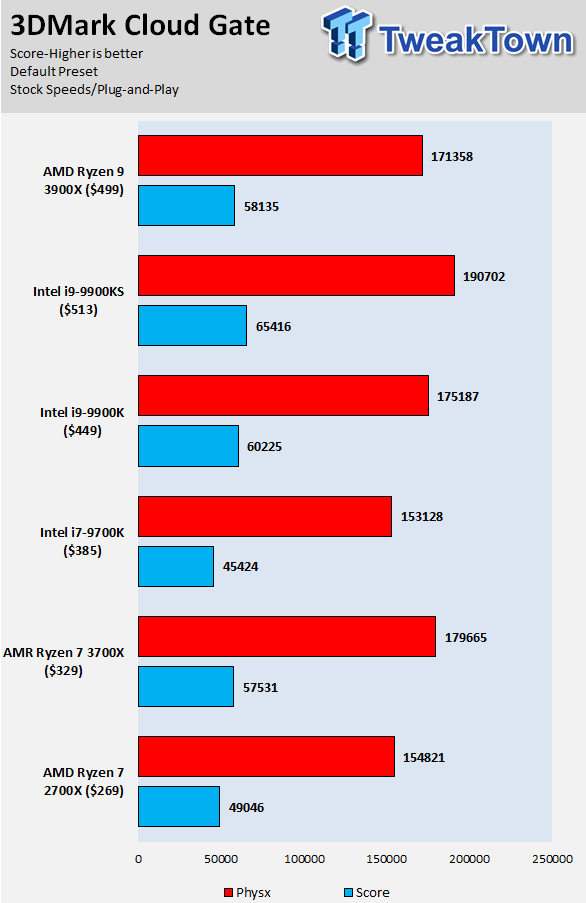 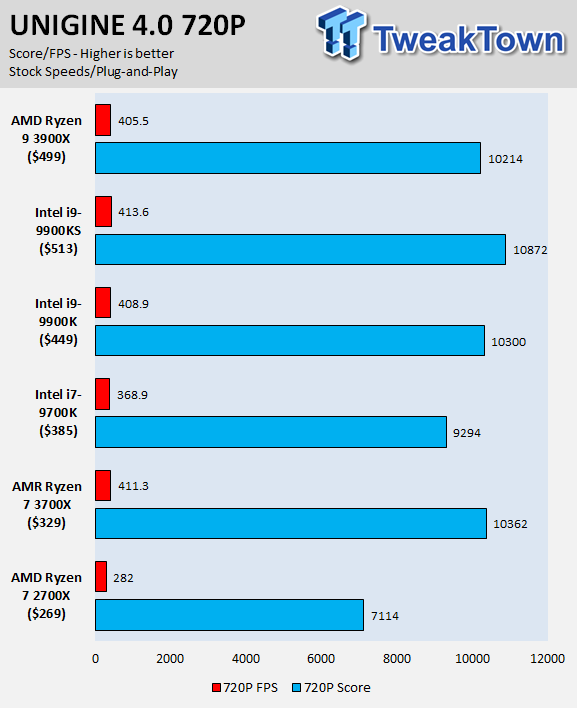 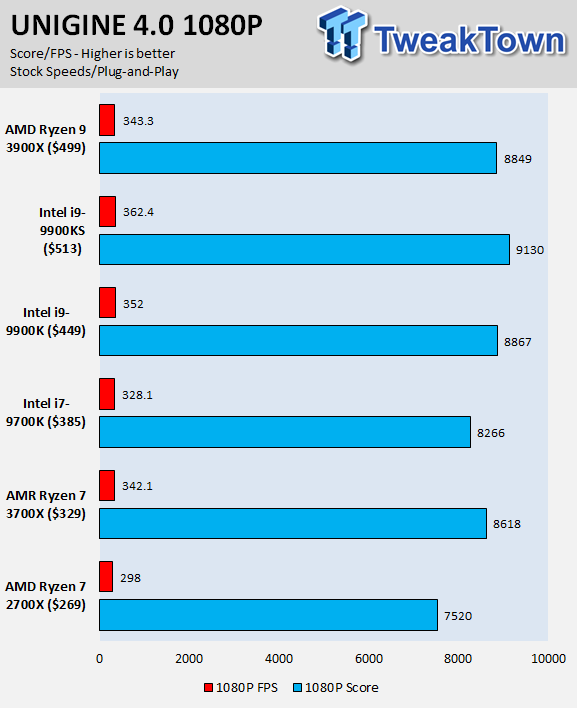 In FireStrike, we see the 9900KS pull ahead by a few points and further increase the gap between Intel and AMD processors at the same price point. While it was close between the 3900X and 9900K in CloudGate, the 9900KS further increases this gap. We see the same thing happen with the UNIGINE tests, which makes us think the whole point of the 9900KS was to show a clear difference between the $500 CPUs. 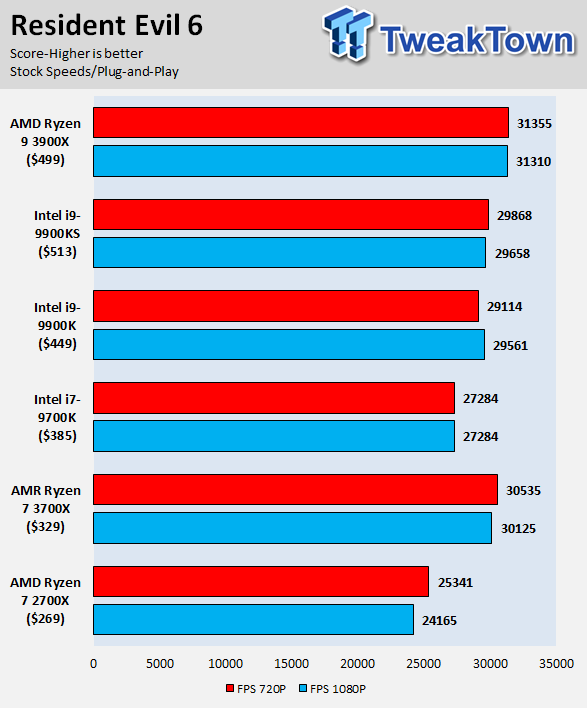 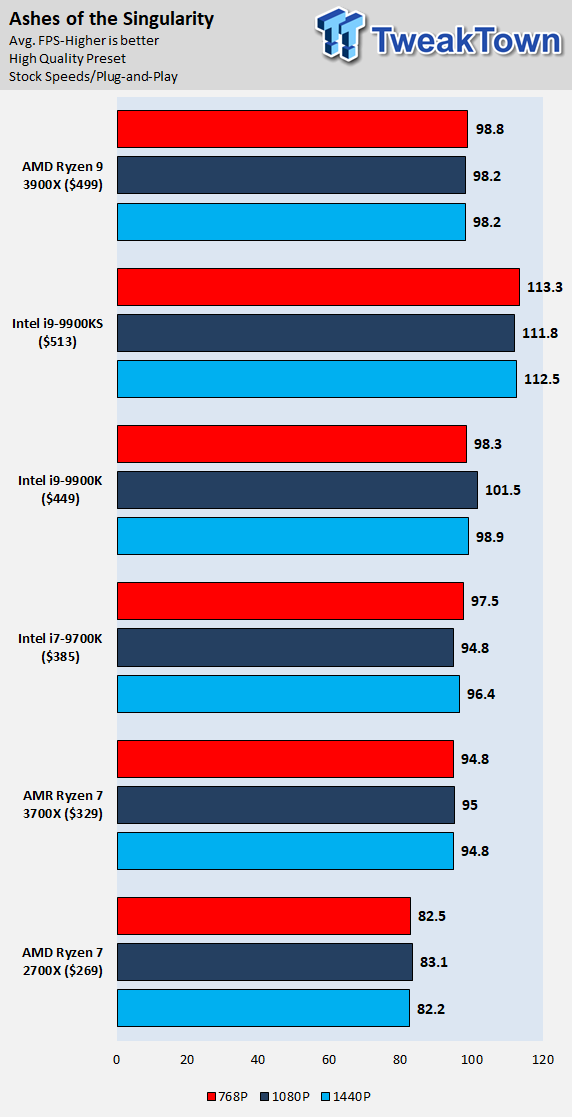 In Resident Evil 6 we don't see much of a difference, just a small uplift over the 9900K. In GTA:V we see a modest increase in performance, but in average FPS and minimums. It's not exactly a 6% increase, but it's an increase.

In Rise of the Tomb Raider, where we aren't bottlenecked by the GPU (720P and 1080P) we see the 9900KS increase performance by over 6%. In Ashes of the Singularity we see Intel really kick things up a notch, and prove that the game loves frequency (even though we also know it loves cores). We also see the CPU lift the CPU bottleneck, and really makes this the fastest gaming processor. 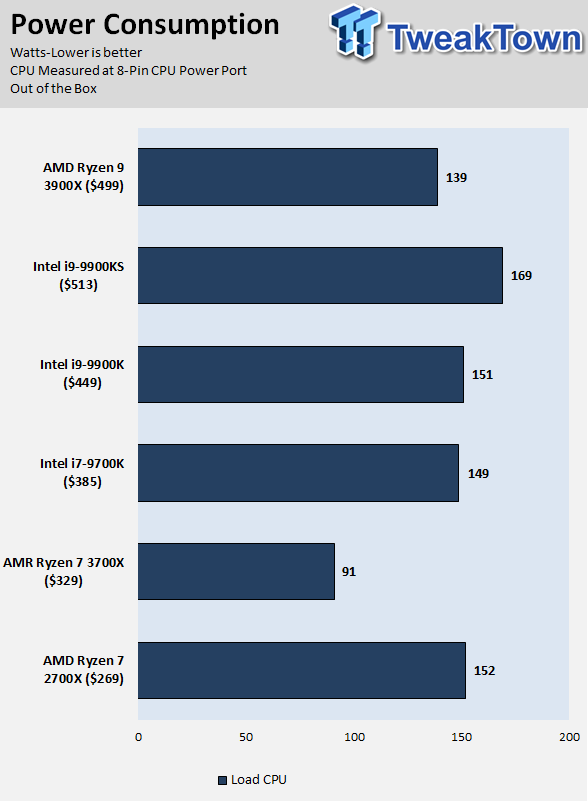 The 9900KS really loves power, it eats it up quite well, and while the difference here isn't the same as what is on paper (95W vs. 127W), it is more realistic because we know TDP numbers don't mean much. 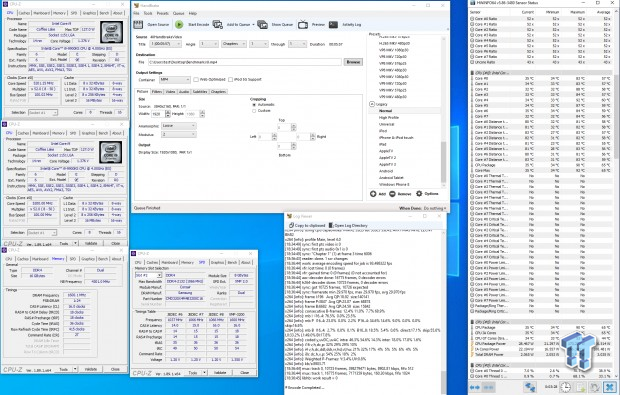 The CPU runs hot, but we were able to pass our HandBrake test with a 5.2GHz overclock. At 5.3GHz we were able to run CINEBENCH. We set 1.375v with Turbo level LLC, activated XMP, increase core current limits, and unlocked the power settings in the UEFI.

If there was ever a reason to increase TjMax, the 9900KS might be it, although we were impressed with our temperatures here. We used a closed loop all-in-one water cooler, and if we really wanted to run this at 5.3GHz or even 5.4GHz we would use a custom loop.

Here is where you can fast forward to the final section of the review and get a quick recap and points on the Intel Core i9-9900KS.

Fastest Gaming CPU: AMD's Ryzen 9 3900X did close in on the lead of the 9900K, and Intel's answer was to turbo boost their 9900K and find a bunch that can do 5GHz on all cores. The 9900KS seals the deal with Intel having the best gaming CPU, although you also need a nice GPU to take full advantage of it, as we used the NVIDIA RTX 2080 Ti.

Increases in Applications Too: The all-core Turbo is also very useful in applications where all cores are utilized. Even in mixed-core usage we see boosts, and we don't see any losses in single core performance.

Overclocking: The 9900KS is basically a highly binned 9900K, and that means the silicon in there is better at reaching high clocks. So, if you had dreams of a 5.2GHz+ 9900K, you might want to buy a 9900KS instead as it will give you the best chance at that.

Temperatures and Power: Driving high clocks up requires more power, and when you have more power you have more heat, and in a package that is so small compared to the high TDP Skylake-X CPUs you get very high temperatures. At stock with the default voltage, which we think is a bit high to keep things stable, we were hitting around 80C full load with our H150i Pro, but when we overclocked and controlled voltage we were hitting about the same temperatures. 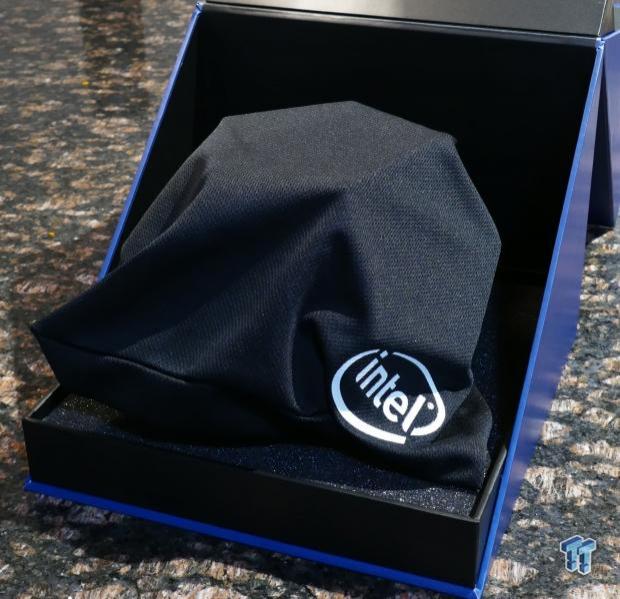 Intel really wants to make sure that the line of ascension for the best gaming CPU stays with them, and the 9900KS does this, so for now Intel still keeps everything in the family. If there was some sort of small margin between the 9900K and 3900X, that small margin is now much bigger. It's also useful in certain applications like HandBrake where mixed usage might trigger different Turbo levels, but now we know exactly what we will get.

Now, this CPU is going to require not only a very nice all-in-one or high-end air cooler for even stock usage, but also a motherboard with very good VRMs. We have heard reports of some decent Z390 motherboards not handling the CPU and causing throttling, although we didn't see that since the Z390 Aorus Xtreme has one of the best VRMs, although cheaper models like the Master should handle it just nice.

We highly suggest you invest a good amount of time and money into the system ecosystem if you choose the 9900KS, but in the end, you can create the fastest gaming PC in the world.

If you are looking to build the fastest gaming system in the world, Intel's Core i9-9900KS will get that job done quite easily, although it will cost you.