Akitio has put together a solid enclosure with the Quad X offering USB PD as a strong selling feature for MacBook users and the ability to run multiple monitors as a bonus.

Akitio ended 2017 on a high note by refreshing much of its Thunderbolt product lineup with the Thunder3 series. Our first look at this series comes in the form of the Thunder3 Quad X, a four-bay 3.5" drive enclosure with some unique features onboard.

One look at the Quad X and you can see and feel the inspiration from Mac Pro's of the past. The space grey exterior encompasses both the aluminum enclosure and front panel mesh. Features include Thunderbolt 3 technology with two ports supporting USB Power Delivery at 9V 3A for 27 Watts.

Shooting off the Thunderbolt 3 ports, Akitio has placed a standalone DisplayPort connector on the rear of the unit allowing two monitors to be connected. Internally, we have a four bay SATA backplane offering support for both 2.5 and 3.5" drives capable of reaching 1480 MB/s going off marketing numbers. 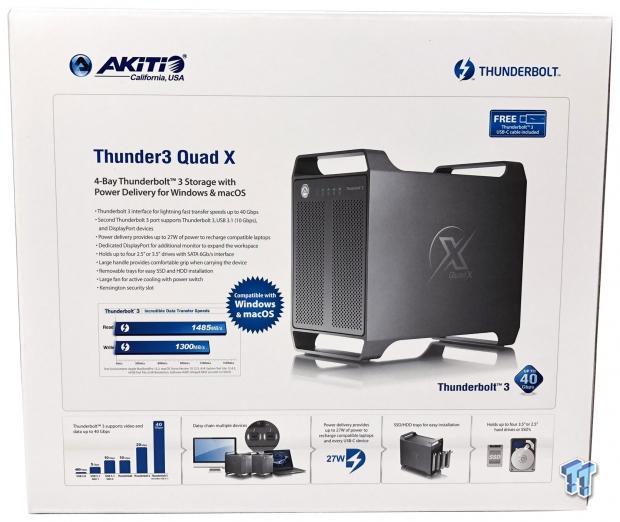 Akitio has placed a good amount of marketing into their packaging for the Quad X. The left side offering information on performance and OS compatibility and the right mentioning drive support and features. 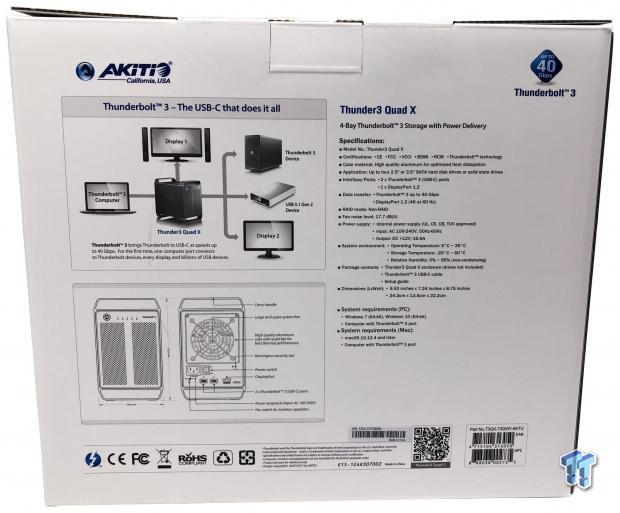 The back goes into more detail with a full specification list and use cases on the left. 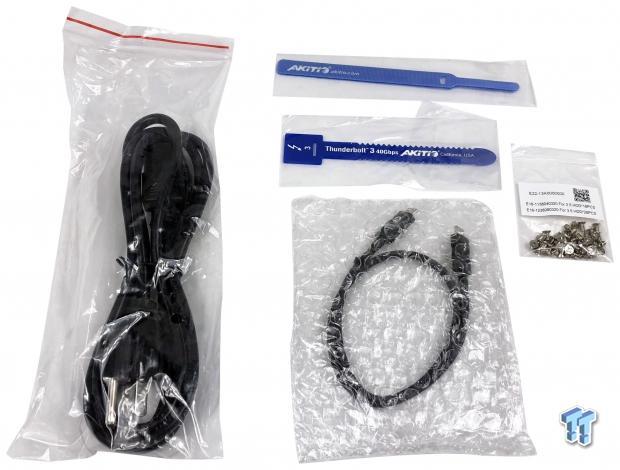 Included in the box,we have a power cable, cable ties and Thunderbolt 3 cable. 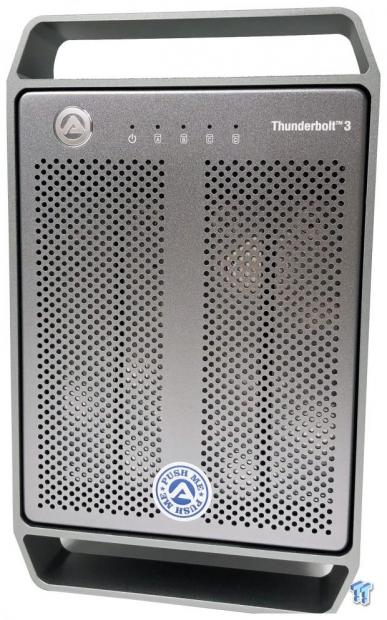 The front houses the Akitio logo to the left, followed by five LEDs. These LEDs are noted for power and drive activity. The remaining front panel is an aluminum mesh which you can remove by pushing in at the bottom. 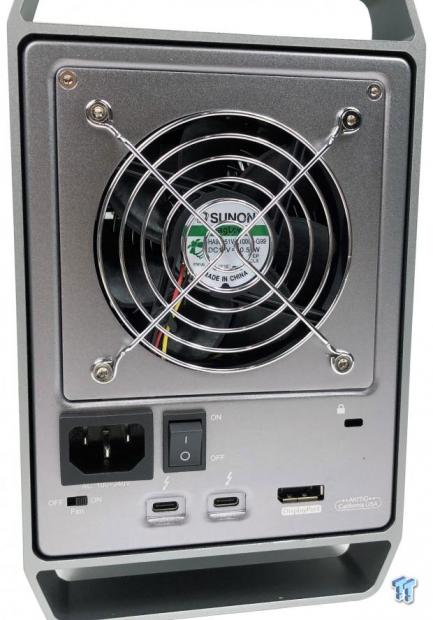 The backside gives us a cooling fan at the top followed by power input and the fan switch below. Two Type-C ports offer Thunderbolt 3 connectivity and 27 Watts of power delivery these are followed by the stand-alone DisplayPort 1.2 connection and Kensington lock slot. 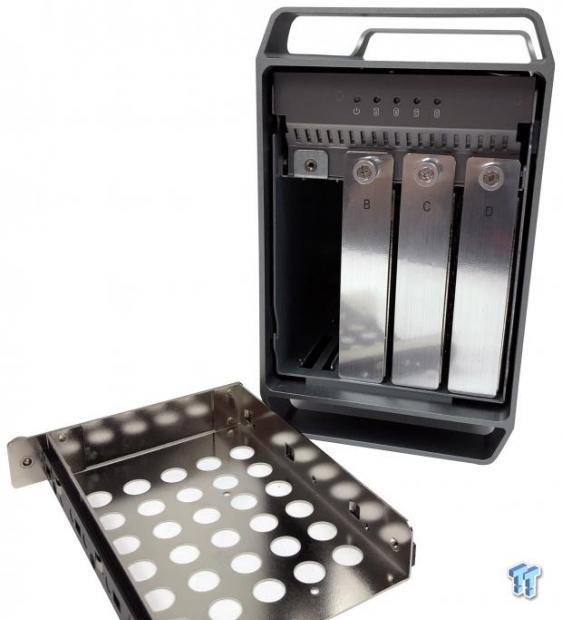 The drive trays appear to be steel with compatibility for 2.5 and 3.5" drives, they slide on plastic rails for ease of use and lock in tight with thumbscrews seen at the top. 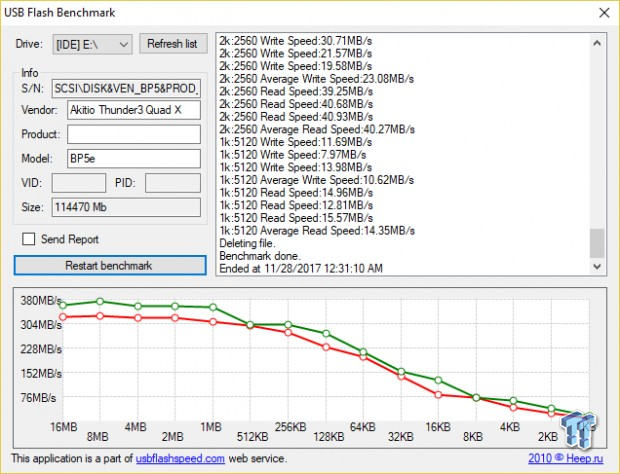 To get the most performance out of a single drive, I used a 2.5" SSD for testing this unit. With Flash Benchmark I was able to get near 400 MB/s read and 350 MB/s write. 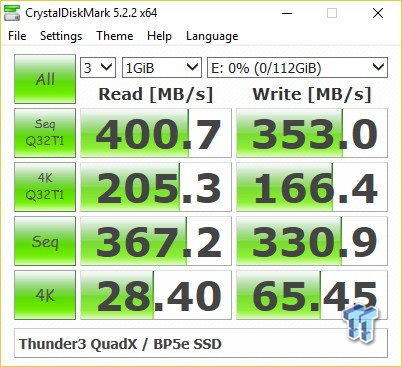 Using the same drive in CrystalDiskMark, I was able to reach the same 400 MB/s read and 350 MB/s write. 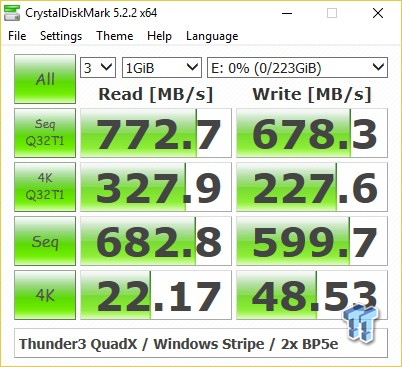 Adding in a second drive and utilizing software RAID functionality, I was able to get the Quad X up to 770 MB/s read and 670 MB/s write. Taking this into account, I do imagine if I had two more drive this unit would reach its marketing numbers of 1480 MB/s.

Closing this review, Akitio has done a remarkable job with the Quad X. The aesthetics will certainly appeal to anyone that enjoys clean lines and aluminum construction.

The functionality takes things to a new level for enclosures adding in the ability for two monitors to run off the rear I/O while charging your MacBook via USB PD. 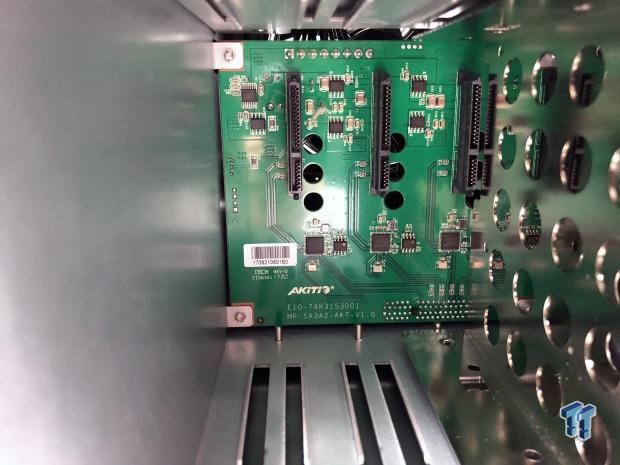 Internally, Akitio put a good amount of effort into the design giving each drive slot its own SATA controller feeding to the Thunderbolt 3 controller. This should give peak performance of ~1500 MB/s in a four-bay enclosure and going off my own testing I do think its capable.

Performance in my own testing was decent, I did use a couple SSDs to get the most out of what I could do. With a single drive I reached 400 MB/s read while two drives gave us 770 MB/s read.

Pricing on the Quad X seems to be a bit high for a four-bay DAS enclosure. That said, Thunderbolt products do tend to ask more of our wallets for whatever reason but Akitio has given the end-user a good amount of value by adding in USB power delivery and the additional DP port.

The Bottom Line: Akitio has put together a solid enclosure with the Quad X offering USB PD as a strong selling feature for MacBook users and the ability to run multiple monitors as a bonus.