Over a decade on from Peter Jackson's period-set King Kong feature , Kong: Skull Island veers quite wildly from what's come before and retconned to merge with the 2014 Hollywood Godzilla reboot into a cinematic universe which will ultimately feature Japanese beasts such as Rodan, Mothra, and Ghidorah. What I'd initially dismissed as a pretty ordinary idea actually turns out to be a hell of a lot better than it has any right to be; a thrilling and highly entertaining monster mash.

When a secretive Government agent (John Goodman) launches a campaign to map an uncharted island in the South Pacific, the crew led by U.S. Army veteran Preston Packard (Samuel L. Jackson) and former British air captain, turned-mercenary James Conrad (Tom Hiddleston) are literally blown out of the sky when an otherworldly beast turns up to defend his land from the foreign incursion. But Kong is far from the most fearsome, or deadly creature to lay claim to the island. 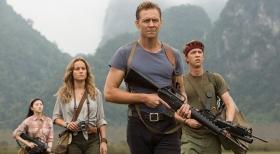 A jacked-up Tom Hiddleston leads an excellent ensemble cast which also includes Brie Larson, Samuel L. Jackson, and John Goodman, as well as the genius inclusion of John C. Reilly who serves to add a wonderful touch of humor (and humanity) to the proceedings. While this would be an enviable cast for any picture, the real star is, of course, Kong himself, brought to life via a motion capture performance from actor Terry Notary which not only helps to remove a lot of manual CG keyframe animation but aids in a more organic portrayal.

Kong 2017 is a huge generational leap from almost any CG creature that's come before it, with complex layers of detail, and believable mass and movement. At a time where it's possible to do basically anything given enough time and resources, Skull Island raises the bar yet again for computer graphics beasts. 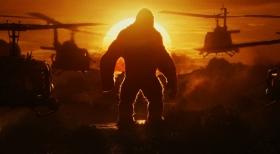 Kong: Skull Island is presented in its original aspect ratio of 2.39:1, encoded with H.265 compression and finished with a static HDR-10 pass.

Lensed at 3.4K before being finalized in a 2K digital intermediate (as is common with most effects laden pictures these days), Kong Skull Island presents a modest increase in resolution over the 1080p Blu-ray, but it's in the formats wider color gamut and HDR pass which really makes the film shine like a diamond.

Heavily processed with lashings of grain and an almost sepia-toned coloring throughout most of its runtime, Kong Skull Island isn't the most visually appealing feature film to be released on the format thus far, but it is a perfect translation of director Jordan Vogt-Roberts' artistic style, which mirrors the theatrical experience perfectly.

Despite appearing a little softer than most modern blockbusters (again, an artistic decision and one that undoubtedly helps merge the frequent CG shots), Kong: Skull Island is an impressively filmic presentation which doubtless presents the film to its highest potential. The HDR grade is consistently good and pops with impressive saturation when required - watch out for the bone yard sequence for an eye-meltingly good time.

Overall, Kong: Skull Island doesn't quite reach the heights of demonstration material, but it remains a technically proficient 4K presentation which retains the qualities of the director's artistic intentions. 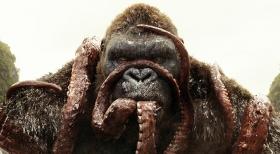 With a complete absence of anything resembling subtlety, Skull Island comes packing a powerful track that's as pleasingly aggressively as one would expect. The front soundstage is balanced well in relation to the mid and back rear surround channels, which are also kept constantly active. There's so much going on, with a level of sonic detail that impresses.

Even the stock 1970's rock and roll tracks have a crisp and pleasing sound. Bass is particularly strong and reverberates with powerful response when called on. The further addition of dual height speakers in a Dolby Atmos setup makes for an even more involving experience and gives the front soundstage a little more oomph. 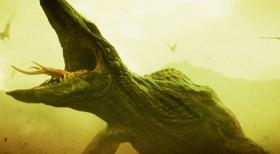 There are no extra features to be found on the main 4K disc, however, the included 1080p Blu-ray houses multiple featurettes running at a little over 40 minutes and are overwhelmingly promotional in nature.

The undoubted highlight is the Audio Commentary by Director Jordan Vogt-Roberts, who speaks eloquently and enthusiastically and sounds generally pretty humble with what he was able to produce. The two-part Building a King featurette provides a quick historical overview of the classic character, as well as the cutting edge visual effects employed to visualize him.