While the current popularity of comic book franchises has much to thank 2001's Spider-Man (as well as Bryan Singer's X-Men two years earlier), it's been a long time since the web-crawler's had an impressive turn on the big screen. The laughably bad Spider-Man 3 killed off the initial Tobey Maguire franchise, and its subsequent (and rapid) reboot failed to capture the imagination of audiences and critics alike.

But just as the Marvel Cinematic Universe showed the proper way to treat comic book characters, the former iteration was mortally wounded from the get go, and by The Amazing Spider-Man 2, it was in a creative tail spin. But like a phoenix from those ashes, that failure has paved the way for the character to be done right. Homecoming is a real joy to experience. 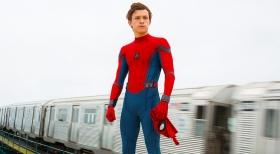 Fast forwarding through the origin story we've all seen before, Homecoming picks up with Peter Parker (Tom Holland) grappling with his dual identities a both college student, and small-time crime fighter. On the latter, he desperately wants to be drafted as a full member of 'The Avengers,' albeit not one taken too credible by its de-facto leader Tony Stark (Robert Downey Jr.), forcing him to take unnecessary risks to be noticed. But Parker might have bitten off more than he can chew when he goes up against the Vulture (Michael Keaton); a local arms dealer who's managed to fuse illegal weaponry with the remnants of interplanetary technology leftover from the battle of New York. 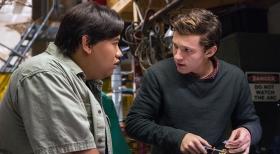 Merging Spider-Man into the Marvel Cinematic Universe is a project that's taken years to happen, and very nearly didn't. But a rare act of mutual value-adding saw Disney and Sony Pictures team up for a complex distribution arrangement which fans are the ultimate beneficiary of. Sure, it wasn't without its difficulties (laid bare for all to see during the infamous Sony hack debacle), but the proof is in the pudding. What they've cooked up is light years ahead of any version of Spider-Man that's come before it.

Unlike the heavy handed and joyless Captain America: Civil War or the totally overblown Amazing Spider-Man 2, Homecoming hits with a relevant and modern take on the character which plays deliberately smaller in scope. It's somewhat refreshing to see a comic book movie that's not about the end of the world, or a blue laser extending up to the heavens that will result in the death of every man, woman, and child in the city. When it boils down to it, Homecoming is about a college kid who has to stop a petty thief. But it's infinitely more thrilling and involving than the major CGI spectacles that we've become accustomed to. 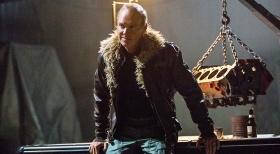 While we got a sneak peek at his performance courtesy of a shoehorned in cameo in the aforementioned Civil War, Homecoming proves that Tom Holland has been perfectly cast as the titular character and his alter-ego Peter Parker. It's no accident that Sony has cast a much younger actor in the role than either of the previous two iterations (no doubt giving the studio a viable road forward for many sequels to come), but age aside, his enthusiastic (and believable) portrayal of the character gives the film a huge forward momentum that never looks back from the opening scene.

Having once portrayed another comic book character you might have heard of, Michael Keaton takes an evil turn as undoubtedly the strongest villain to come out the Marvel stable since Tom Hiddleston's Loki. Driven by the most basic of all human urges; to care for his kin, Keaton's Vulture isn't a man who's evil incarnate - he has a code of ethics, but a short fuse for anyone who interferes with his business, or his family. Keaton was an inspired casting choice and provides much of the film's backbone. 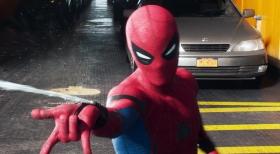 While Director and co-writer Jon Watts only has a few credits to his name (and of those, few have actually seen Cop Car and Clown), with Homecoming the 36-year-old has instantly been propelled to the A-list with his on-trend, breezy and competently directed blockbuster debut. While the failure of Edgar Wright's vision for Ant-Man proved that the fledgling studio has little tolerance for auteurs who want to operate outside their prescribed parameters, he's been able to successfully replicate that which James Gunn managed to do with Guardians of the Galaxy - namely, to operate between the lines, while still deliver a unique picture that satisfies the franchises core fans and casuals alike. And that's no mean feat at all. 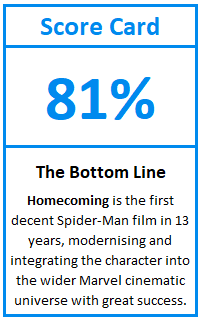