TP-Link's Talon AD7200 is a proof of concept solution showing us what the future will hold for wireless technology while still maintaining functionality in today's networking environment with 802.11ac. 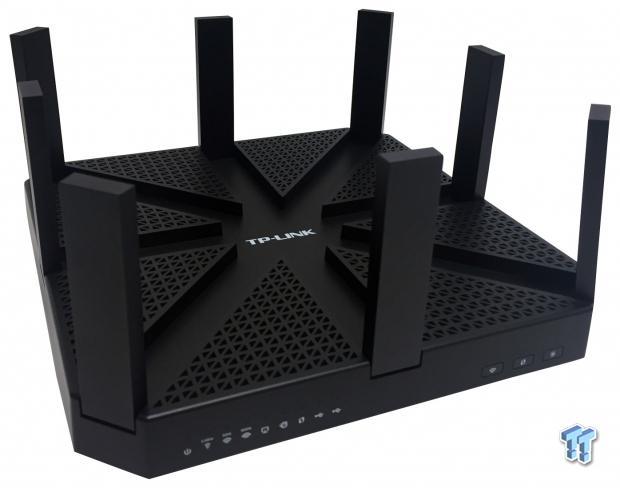 There aren't many wireless technologies we enjoy every day more than wireless networking. This technology has evolved from humble beginnings nearly two decades ago with 802.11a and shortly after 802.11b. With the market having fully completed the transition from wireless n to ac, we now have several products coming through the line that will decide which way the market goes. Part of this is the push for the 160MHz band for 802.11ac in products like the new WRT3200ACM from Linksys and Netgear X4s, and the other part is the push for 60GHz wireless via 802.11ad, and that starts with the TP-Link Talon.

The Talon shares many of its design cues with the Archer C5400 we recently reviewed. In fact, they may as well share the same chassis as the Talon too sports an eight-antenna design. At its heart, the Talon is an AC2600 solution with a stacked 60GHz band to add an additional 4600 Mbps of capability. This means we have 800 Mbps on the 2.4GHz and 1733 Mbps on the 5GHz along with the throughput of the 60GHz mentioned above. 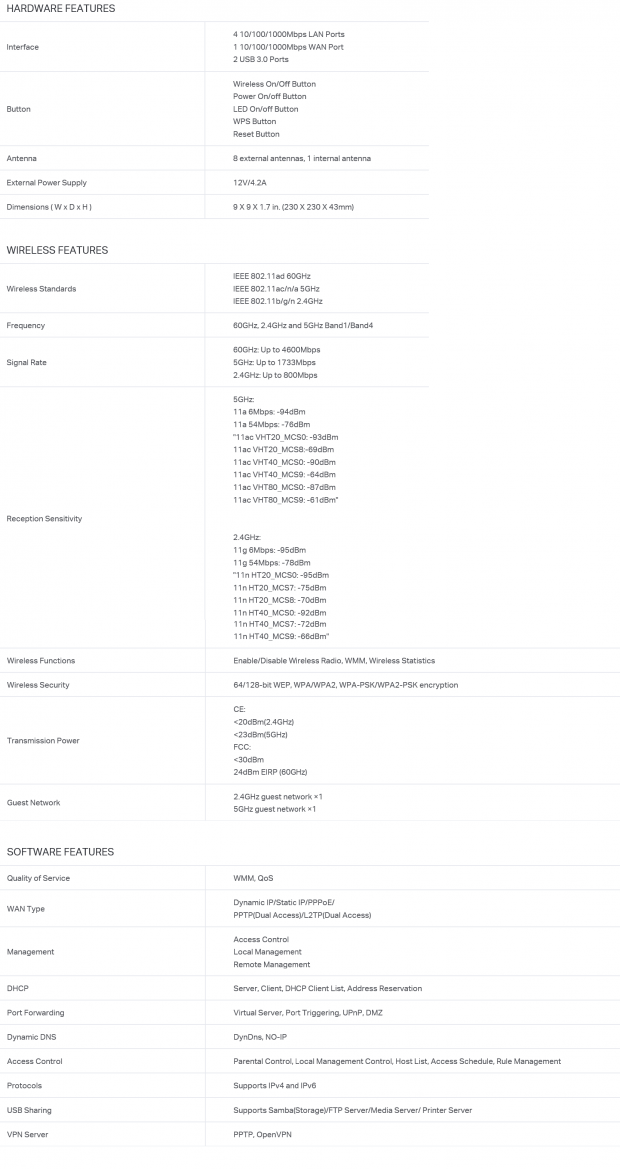 The specification sheet goes into more detail including the 4x1 configuration of the wired ports. Also, we have dual USB 3.0 ports for storage and printers, while the front of this solution houses a full set of buttons for controlling wireless, LEDs, and power. 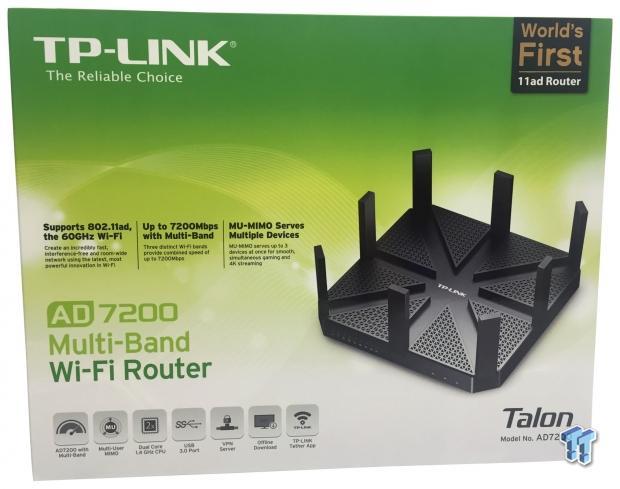 Packaging is like what we normally see with TP-Link solutions. An image to the right of the router is offset by marketing information to the left. Down below, we have a list of features with the model number. 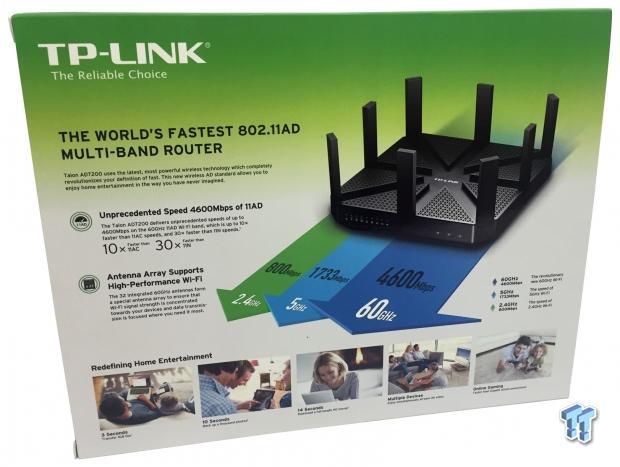 Flipping the box over, a diagram illustrates the 60GHz band operating at 4600 Mbps along with the two standard bands at 1733 Mbps and 800 Mbps, respectively. 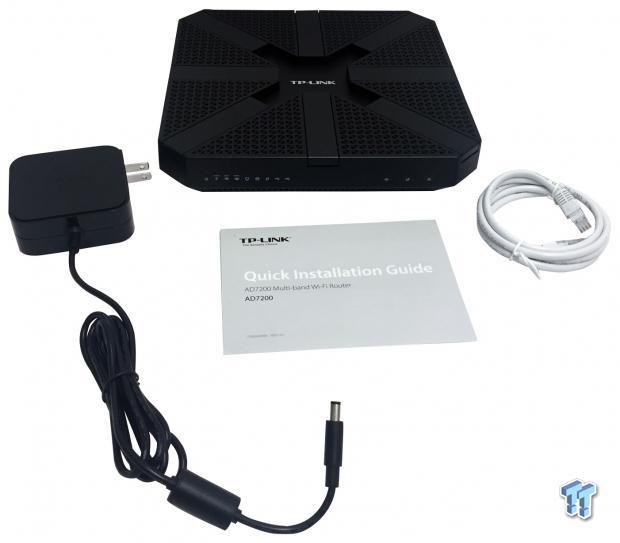 The scope of delivery includes a power adapter, Ethernet cable, and reading materials.

The front of the router houses a series of LEDs to the left that includes wireless, wired, and USB connectivity. To the far right, we have switches for WLAN, WPS, and the LEDs.

Moving on to the rear I/O, we have the dual USB 3.0 ports on the left end while the right side houses the single gigabit WAN in blue and four gigabit LAN in yellow. 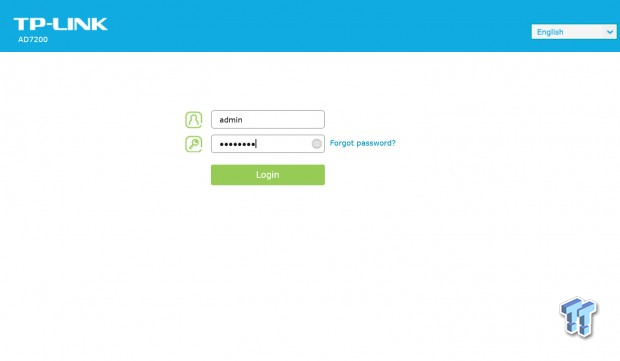 The WebGUI starts with the familiar interface above. 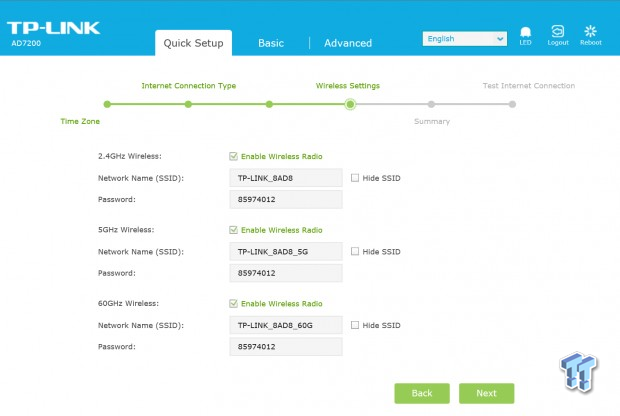 Setup takes just a few minutes and allows you to configure all three of the SSIDs. 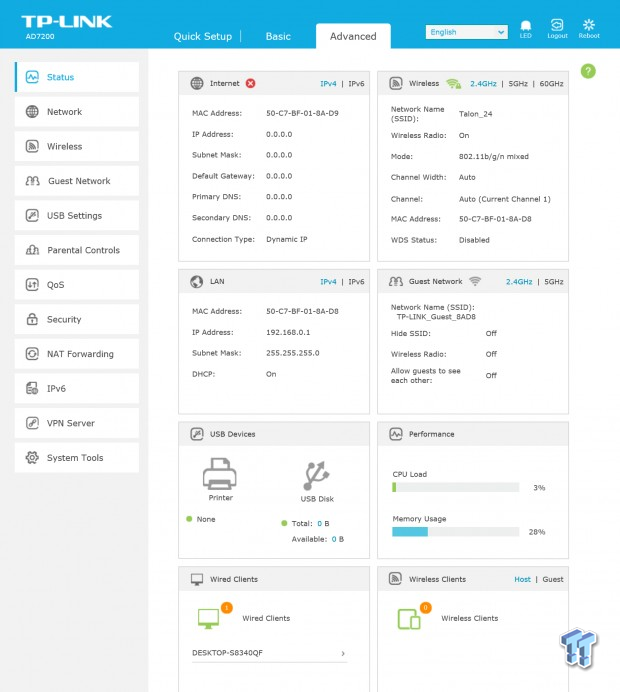 The dashboard for the Talon gives us the familiar quick glance setup to the right where we can see internet info next to the status of our wireless connections. 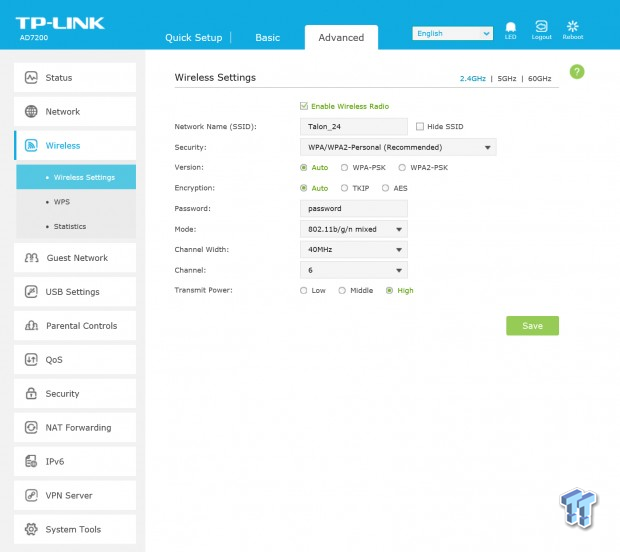 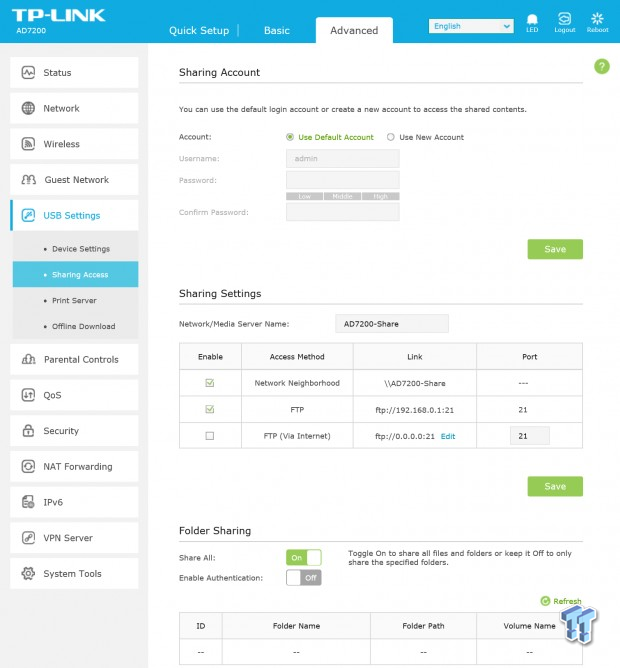 Further into the advanced menu, we find the USB settings from which you can configure sharing of data or a media server. These are in addition to the Talon's print server abilities. 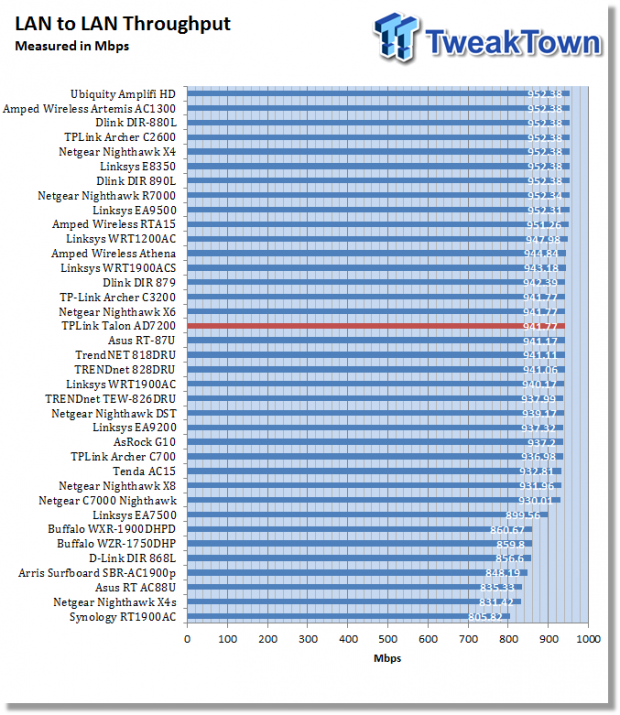 The Talon doesn't disappoint with wired throughput topping out at 941 Mbps. 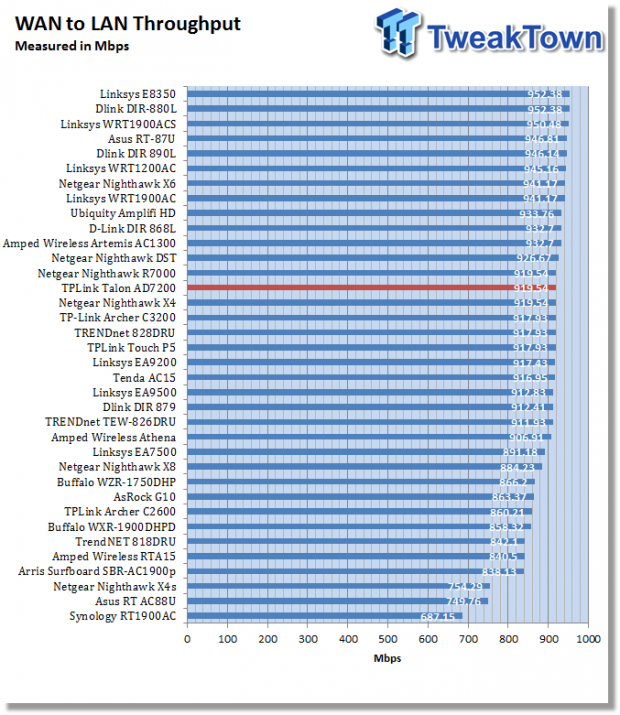 WAN throughput was slightly lower for the Talon at 919 Mbps. 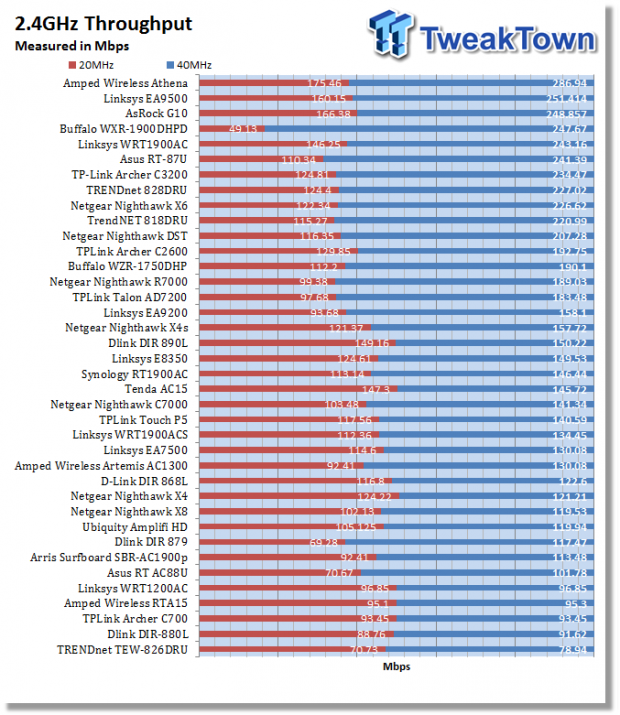 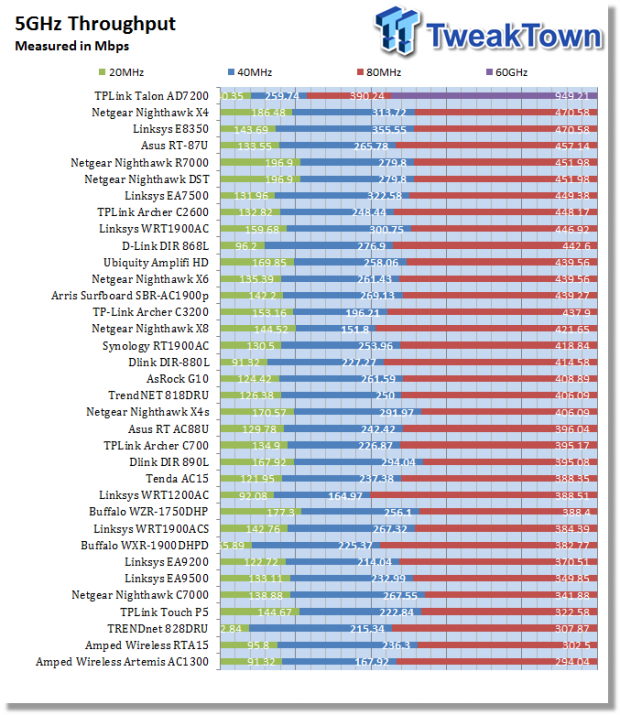 I had to change the chart slightly for the 5GHz band in favor of making a separate chart for one device.

60GHz, on the other hand, was impressive and could cap out my gigabit wired connection, peaking at 949.1 Mbps.

The Talon was the last device I tested before adding in the new range screenshots using the Wi-Fi analytics app. With that said, I did do some internal range testing that we will talk about below. 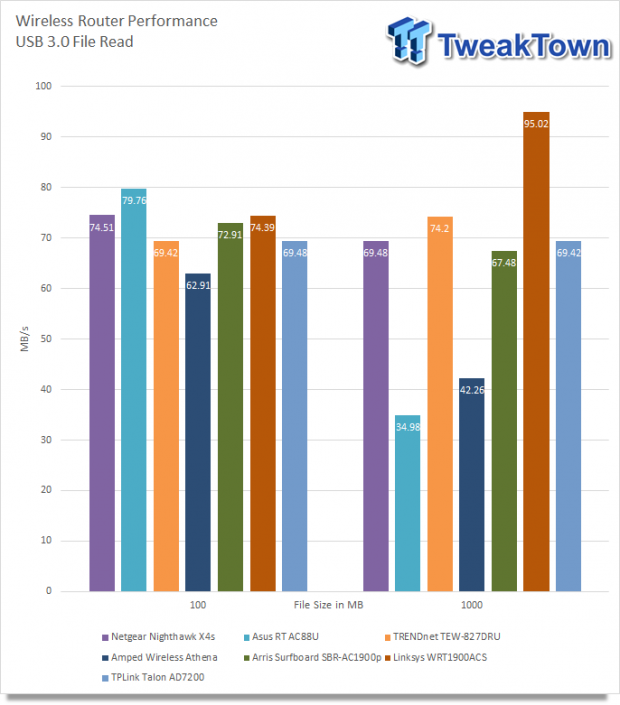 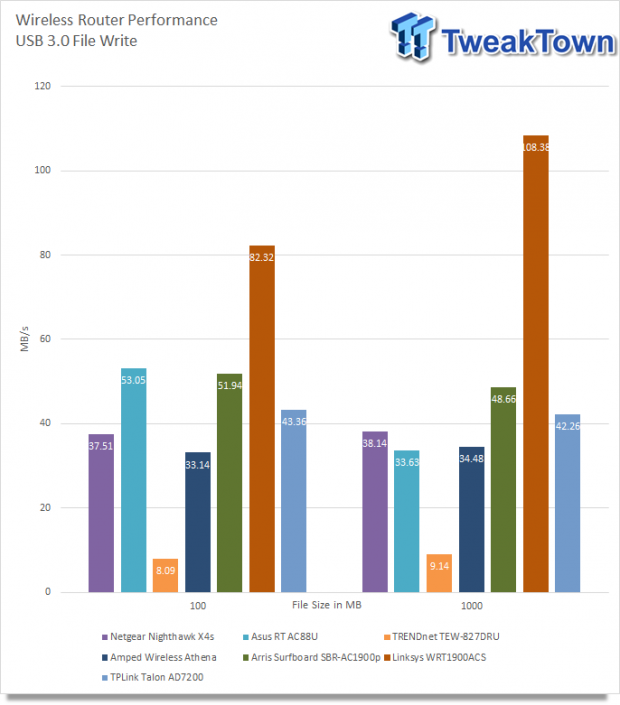 As you can see above, the Talon does quite good with storage, reaching 69 MB/s for both file sizes in our read testing. Write performance is down slightly but overall sticks with what we normally see out of routers.

The TP-Link Talon while offering a full on AC2600 setup underneath, the 802.11ad part is a niche solution if I'm honest. That's not to say I didn't like the router or had any issues with it in testing. Build quality is right with the C5400 offering quality plastics in ABS with the only possible weak point being the antenna hinges.

For testing, TP-Link sent along an Acer laptop using a Qualcomm Sparrow 60GHz NIC, so I used that for testing the 802.11ad functionality and used my standard test system for the rest.

As you saw, 60GHz is certainly an impressive technology, providing true gigabit performance over wireless technology. With that does come a few downsides and one of those is range. I tested the 60GHz performance in several scenarios one of which was me moving further and further away from the router as the test was running and I can say ten foot really is the breaking point for 60GHz.

After that, the performance severely drops off. Now this is an entirely new tech to hit the market, and I don't see it catching on for quite a while, especially with nearly no client devices capable of using it and its poor range. In fact, I'm not even sure half of the consumer market has made the switch to 802.11ac even now, three years in.

With that said, the Talon AD7200 isn't just 60GHz. Sure, it's the first of its kind, but it's a hybrid with 802.11ac technology as its base. So, consumers that want to get a jump on technology now have an option for using 802.11ac now while being ready for the future with 802.11ad, and that definitely not a bad thing.

The Bottom Line: TP-Link's Talon AD7200 is a proof of concept solution showing us what the future will hold for wireless technology while still maintaining functionality in today's networking environment with 802.11ac.