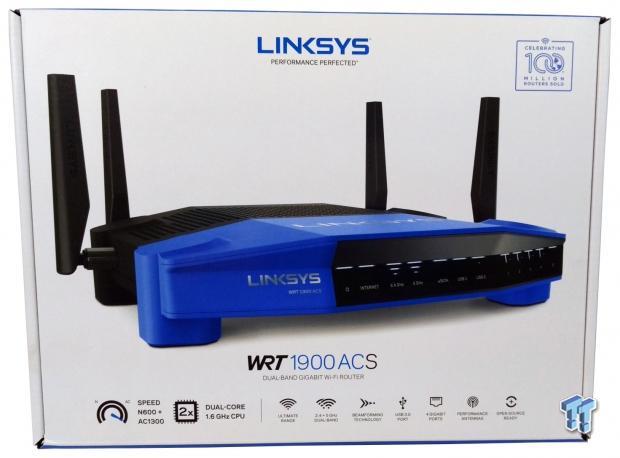 Admittedly, I was probably one of the most excited people on this planet when Linksys brought back the WRT. It has been nearly two years since that launch, and while the performance of that initial solution could have been much better, I used that router in my home network for quite a long time.

Since that launch, Linksys has come back and revamped that solution to offer a more competitive edge in the AC1900 market. With the initial solution housing a 1.2GHz dual-core Marvell Armada SoC, 256MB of memory and 128MB of flash, this new unit, being a more powerful unit takes many of its internals from the WRT1200AC including its Armada 38x SoC, a dual-core solution operating at 1.6GHz. Memory has been increased to 512MB while flash stays the same at 128MB. Connectivity still has this solution offering four gigabit Ethernet ports along with a single gigabit WAN adding to the 2.4GHz and 5GHz wireless bands capable of 600 Mbps and 1300 Mbps, respectively. 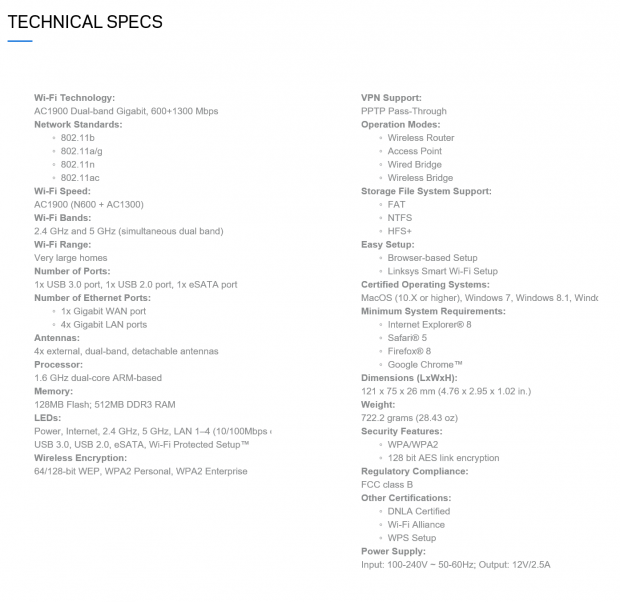 The specs echo what I have mentioned above. It packs in four antennas along with USB 3.0 and eSATA connectivity. As mentioned this is a dual-core ARM platform with 512MB of memory and 128MB of flash and of course with all of this power this solution has been designed for OpenWRT.

MSRP of the Linksys WRT1900ACS Wireless Router comes in at $229.99 with a two-year warranty.

Packaging for the ACS is quite similar to its earlier design. The front carries a large image of the router while features are lined up across the bottom. 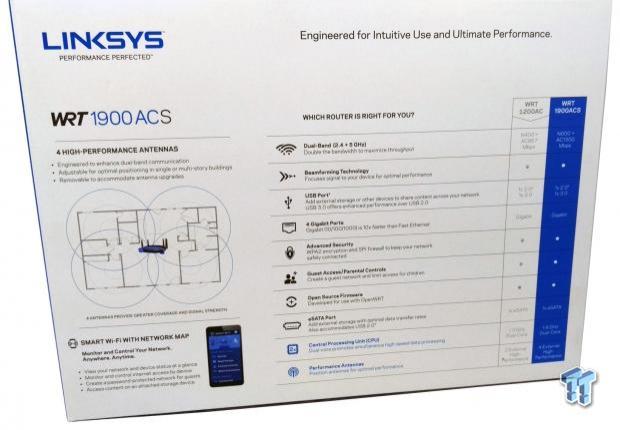 On the backside, we have a quick comparison on the right while Linksys is advertising its new app at the bottom. 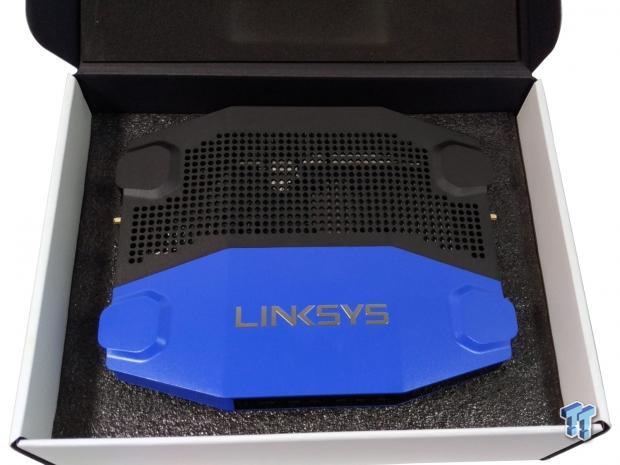 Opening the box, this router is packed well in tight foam. 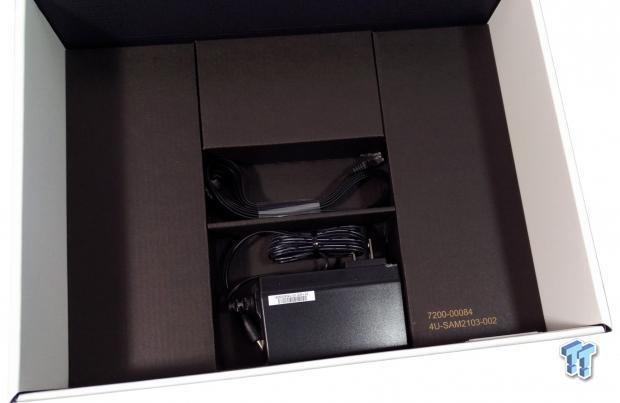 Under the router, all of the accessories are packaged in their own compartments. 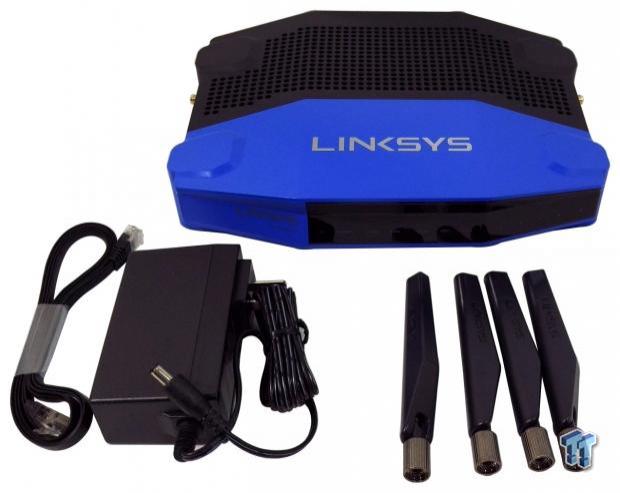 The scope of delivery includes the power adapter, four antennas, and Ethernet cable. 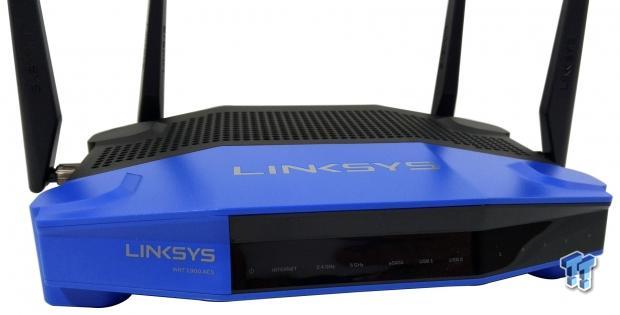 This version of the WRT appears to have better color in its blue plastic, more vibrant. The front panel shows white LEDs for each port of the router.

On the backside, we have the WPS button on the far left followed by the gigabit LAN and WAN, USB 3.0, and the combo eSATA port.

While the Linksys WRT1900ACS enjoys its own built-in Smart Wi-Fi platform, as many Linksys solutions do, I thought this time around I would take you through the new app that allows you to control every aspect of your router on the go. 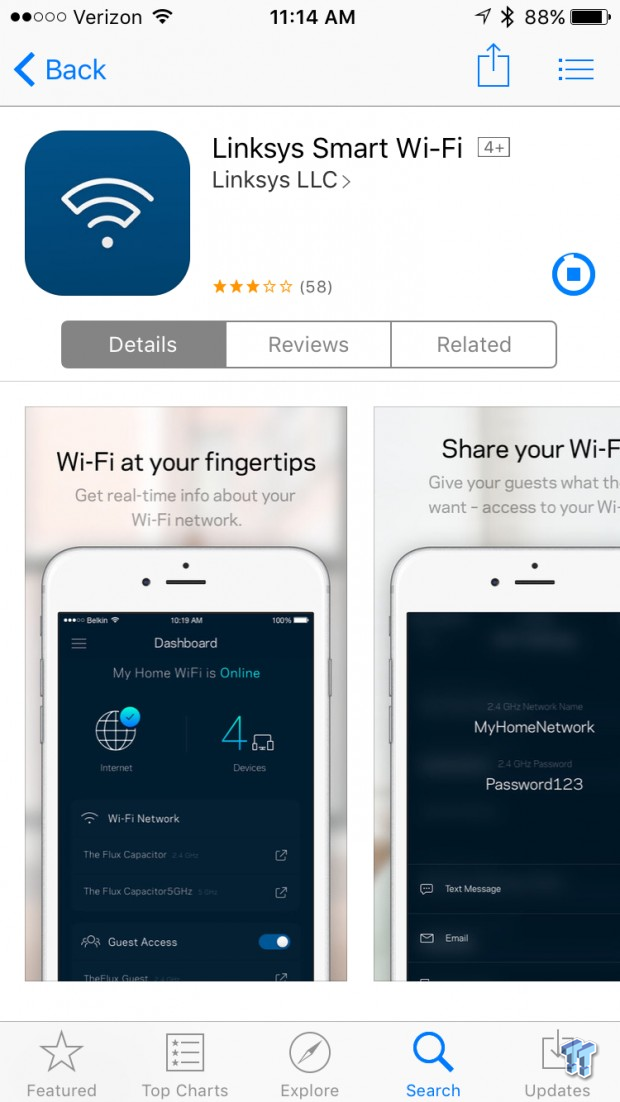 The app, Linksys Smart Wi-Fi, is an upgrade from the previous. 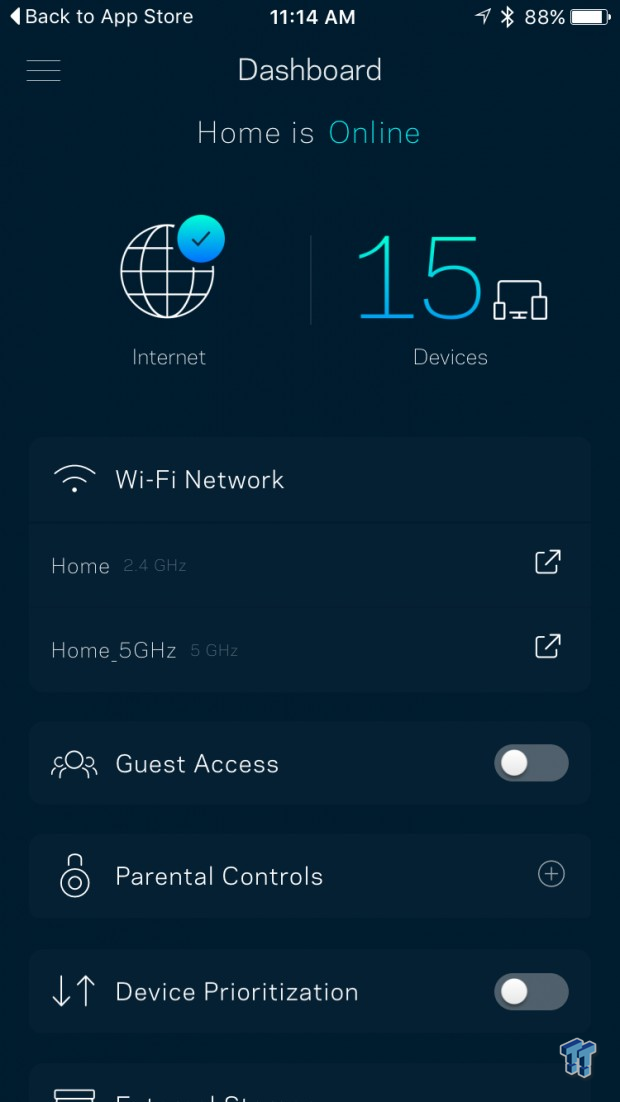 As you can see after a quick login procedure, we have a very sleek dashboard that gives us info about our router. Including internet connectivity and a count of devices on the network. 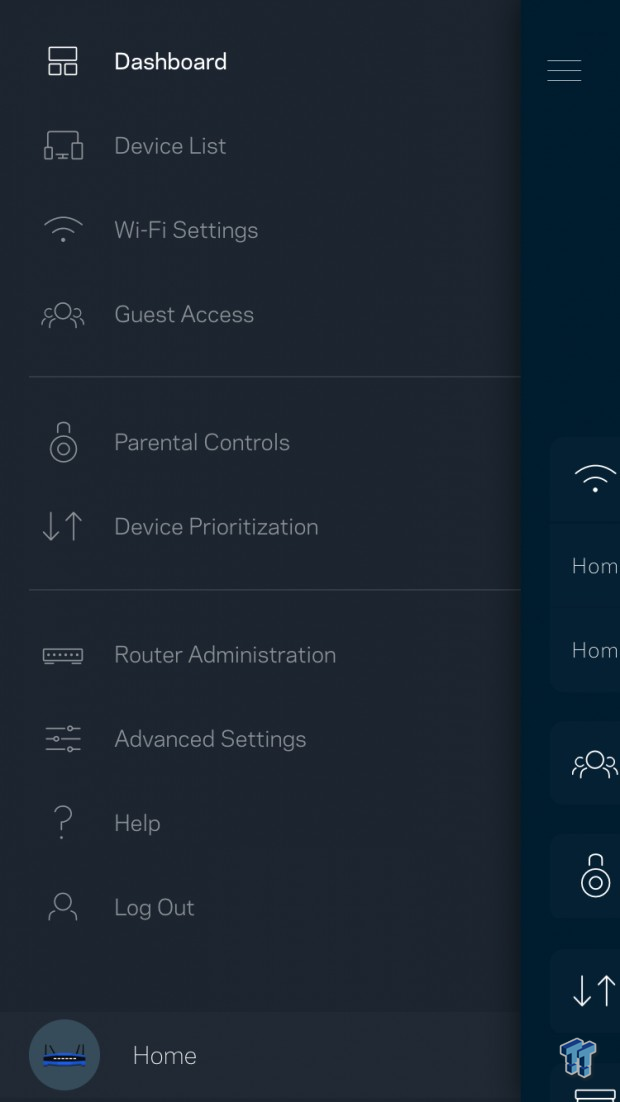 Tapping the top left drop out a menu system that guides you through different areas you can configure. 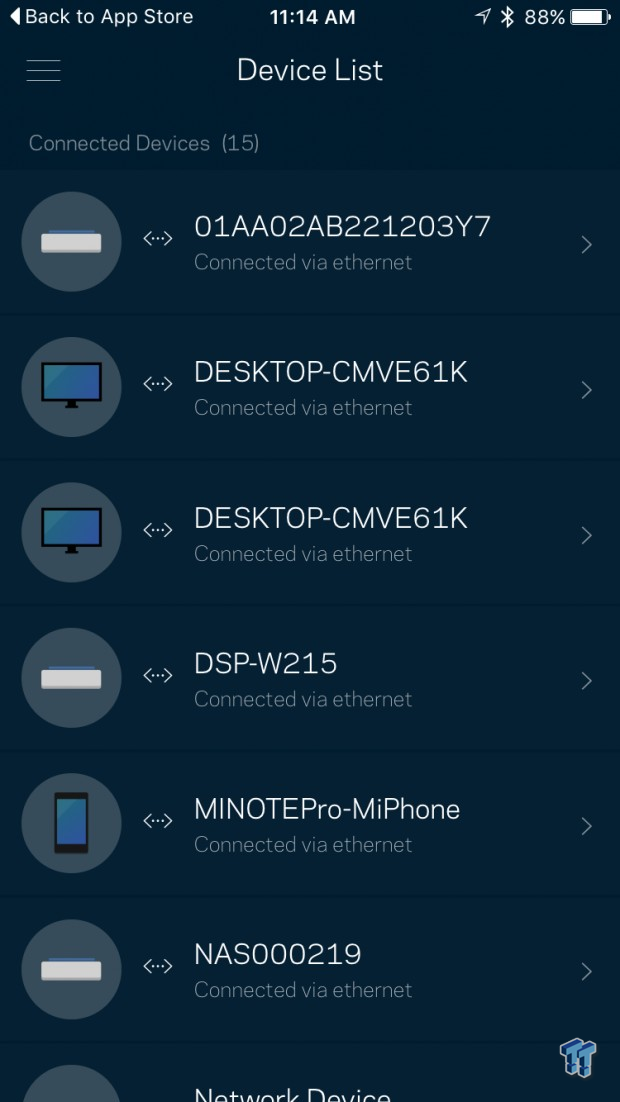 This includes your device list that once you select an item, you can gather that device's IP and other info. 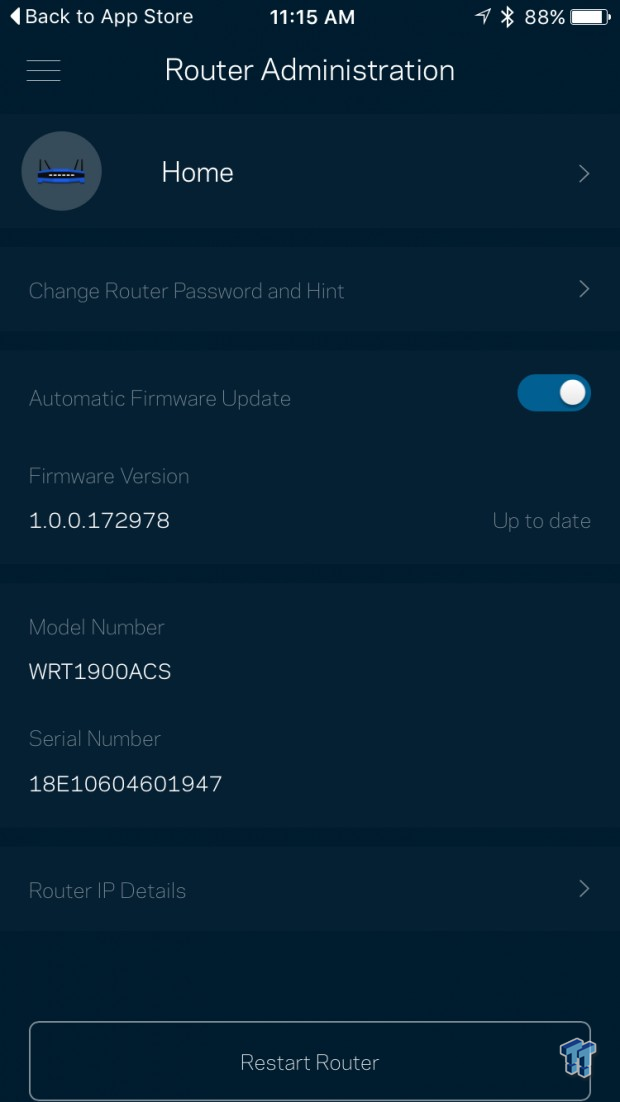 Going to the administration page, allows you to update firmware and see the current version. 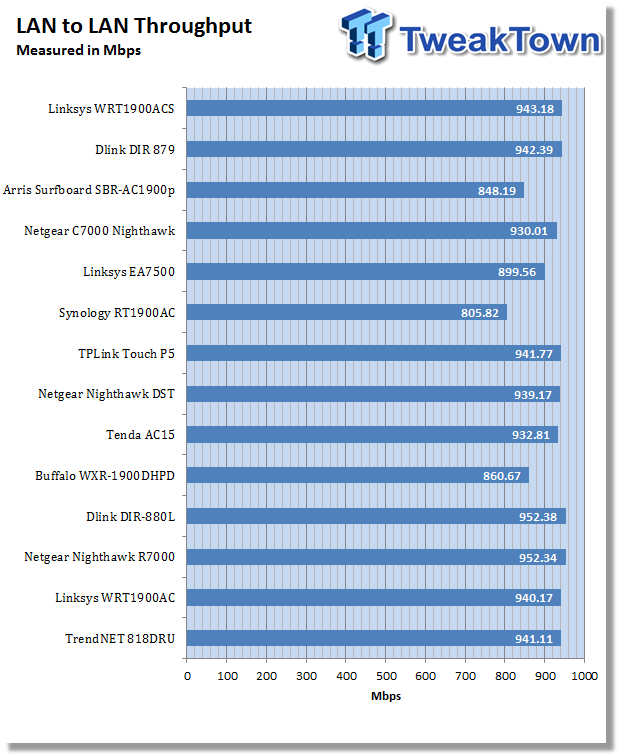 Starting off with LAN performance, the ACS produced 943 Mbps. 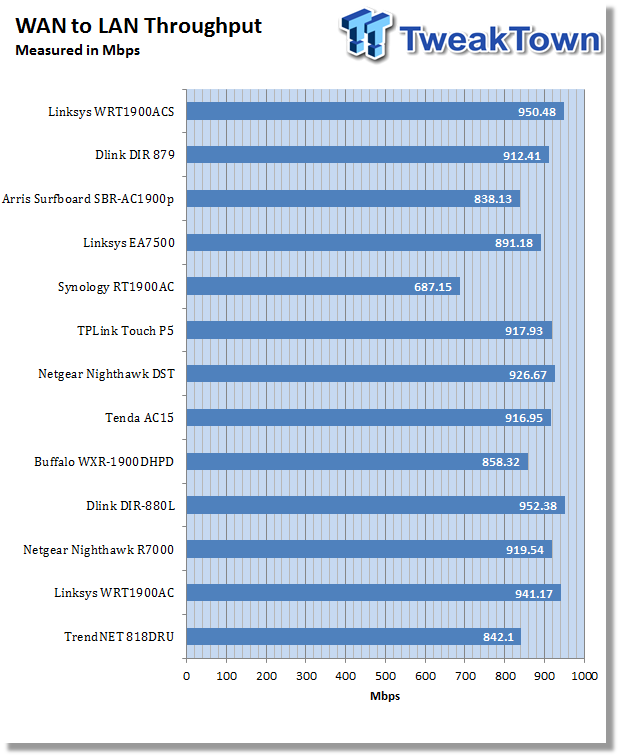 WAN to LAN came in at 950.4 Mbps, slightly better than the AC model from a few years ago. 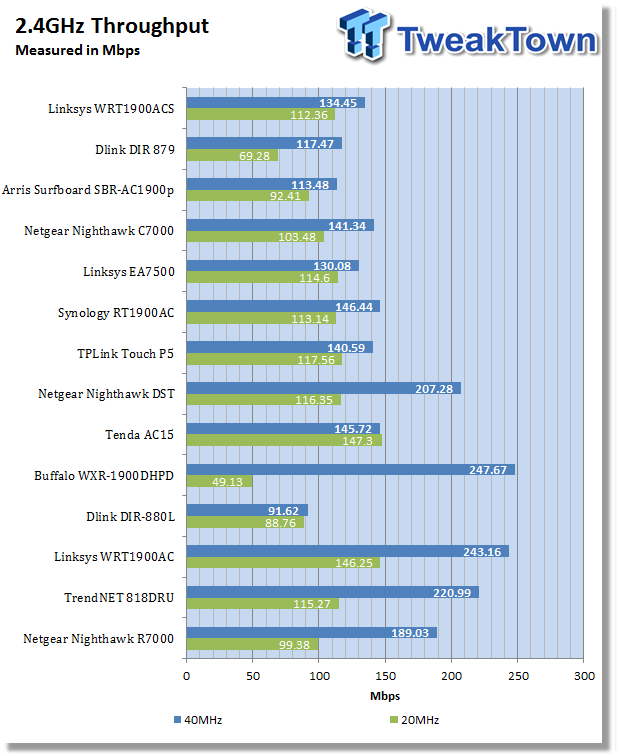 In 2.4GHz testing, the ACS showed solid performance between 20MHz mode and Automatic mode. With 20MHz, I was able to get 112 Mbps out of it while leaving it on auto garnered 134 Mbps. 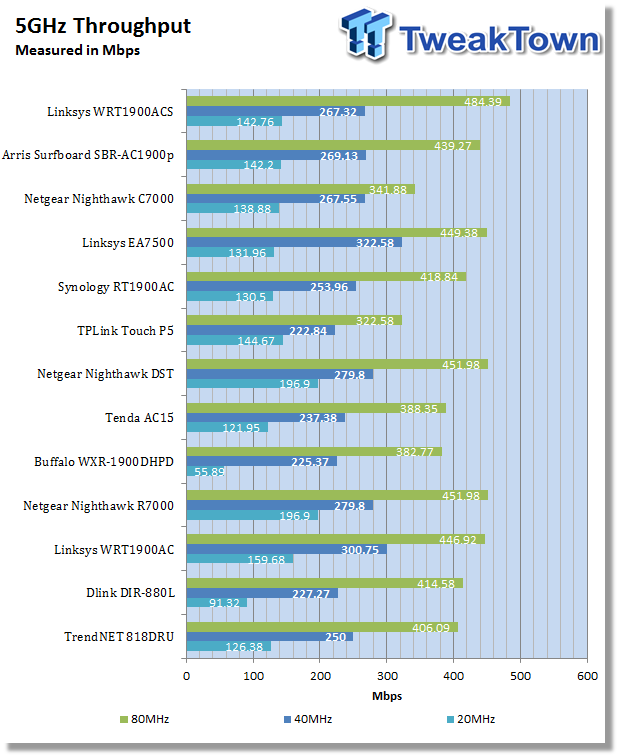 Over the last few months, I have been testing different solutions that would give a visual on wireless router range. While this solution isn't perfect, it is one where you can compare for yourself if you have an Android device.

From left to right, I start at the router with a solid 100% connection. I'm within a few feet at this point and moving out I go to a room about fifteen feet to the left of the router in the next image. At this point, we move about 10 feet forward for the third image above where we get 92 and 100%. Stepping out through the laundry room, performance dives slightly to 68 and 70% and out into the garage which is about 60 ft. from the router we have a 54 and 62% connection.

For our router file performance testing, I use a SanDisk Extreme Pro 128GB Flash Drive formatted in the FAT32 or NTFS filesystems. I then use NAS Tester 1.7 with a 100 and 1000 MB file size and loop it five times with an average result being charted. 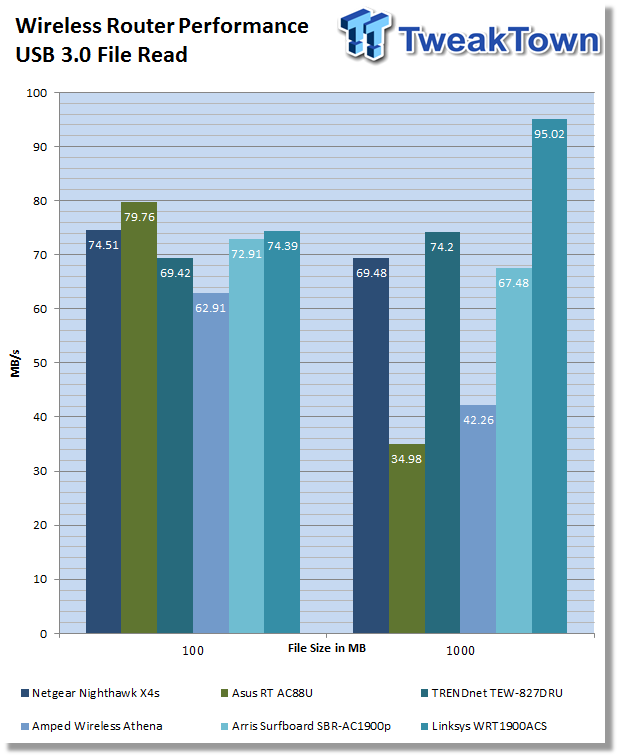 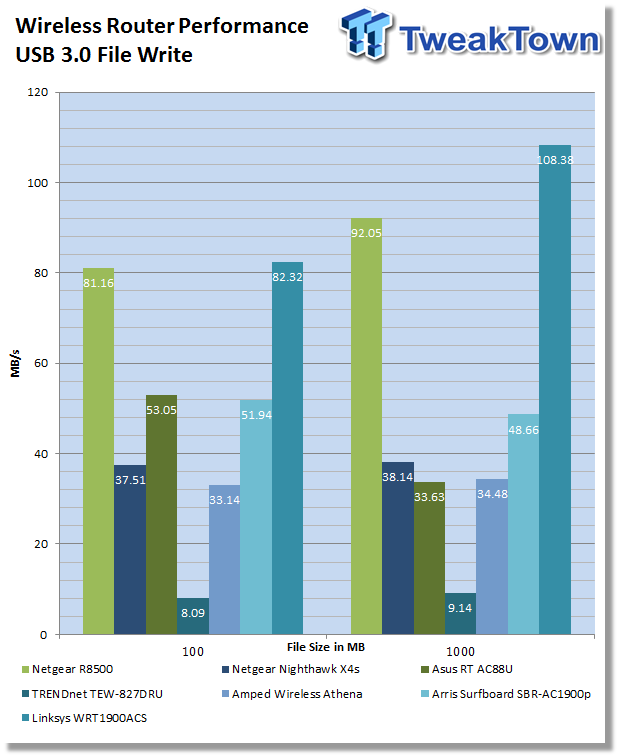 The Linksys WRT1900ACS has me just as excited as the original. The build quality is still there although this router does seem to have much nicer plastics this time around and of course, it still carries a bit of weight, thanks to the heat sinks. It has also been nearly two years since the initial launch of the WRT, so Linksys has had time to iron out a lot of firmware issues, including the file performance.

Speaking of performance, this router brought in average results on the 2.4GHz band but really excelled once I started testing the 5GHz. Going by my charts, the ACS topped all previous AC1900 solutions at 484 Mbps on the 80MHz band, which is certainly a feat. Range too was quite good with the WRT, as not every router I have tested in the past has been able to hold a connection all the way to the garage. With that said, it did get down to 54%, which can be a bit iffy at times. On the plus side, the file performance of this router is just astounding - I'm talking NAS level file performance from a router!

In closing, if you are one that wants complete control of your router wherever you are, the new Smart Wi-Fi app is multitudes better than the previous solution, and the Smart Wi-Fi platform as a whole has been vetted over several years now and appears to have all issues worked out. Simply put, if you want the hands down best AC1900 router on the market, it's the Linksys WRT1900ACS.

The Bottom Line: As the AC1900 market stands right now, the Linksys WRT1900ACS is hands down the best performing router across all measures of functionality.