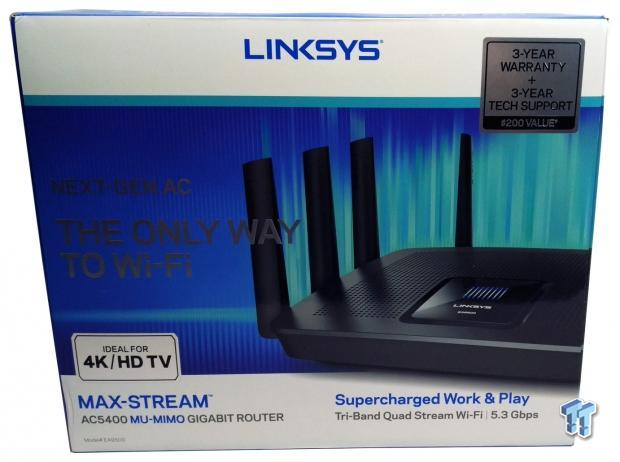 At the end of last year, ASUS and Netgear launched the first wave of tri-band Broadcom solutions in the R8500 and RT-AC5300. Six months later, Linksys is launching a new flagship solution dubbed the EA9500 - and it's actually a milestone for the platform as this solution is the first to support Broadcom MU-MIMO along with Seamless Roaming.

The EA9500 uses a Broadcom platform; it's actually based on the same SoC that was found in the Netgear and ASUS solutions, the BCM4709 dual-core operating at 1.4GHz. Linksys has paired their solution with 256MB of RAM and 128MB of flash. On the radio side, a PLX PEX8603 allows this solution to host two 5GHz BCM4366 4x4 radios with the 2.4GHz band using the same BCM4366 and four Skyworks SE2623L amps. 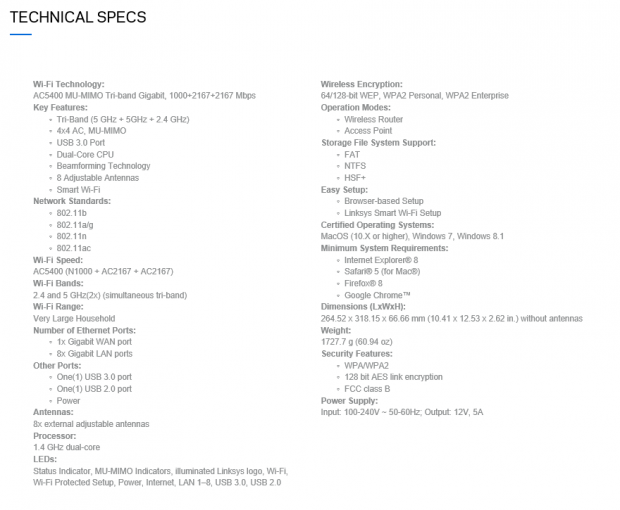 Diving into the specifications, this solution is outfitted with a single 2.4GHz radio capable of 1000 Mbps while two 5GHz radios top out at 2167 Mbps. As mentioned above, this is a MU-MIMO platform sporting a dual-core CPU, beamforming, and eight adjustable antennas. This solution is marketed for very large homes and does features FAT, NTFS, and HFS file system support.

The MSRP of the Linksys EA9500 comes in at $429.99 and features three-year warranty and tech support.

Packaging is quite large given this router is one of the biggest on the market. An image of the router is on the right side of the box while bits of marketing surround the edges. 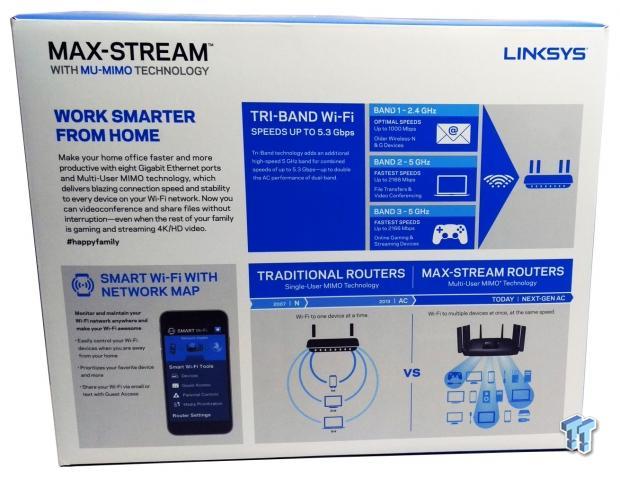 On the back, we have more marketing including a use scenario on the right side. 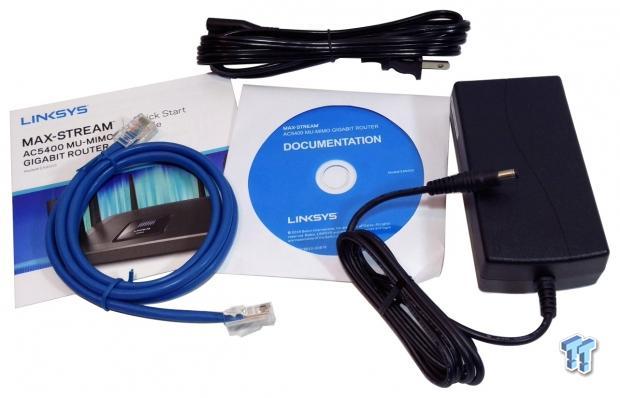 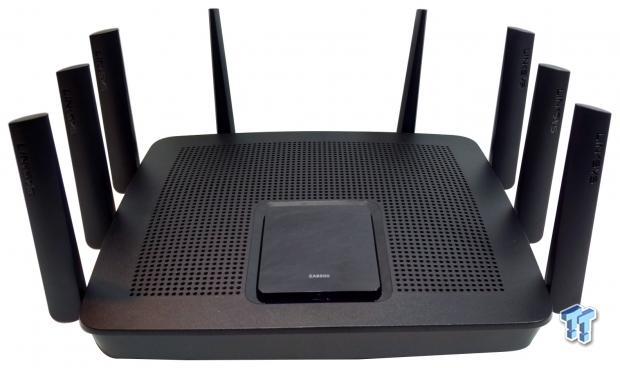 Taking our first look at the EA9500, this router is quite large but similar in size to the X8 from Netgear. The top is completely vented as is the bottom of the router while a small screen sits in the middle.

The rear of the router is all business. It includes a USB 3.0 port to the far left followed by a second USB 2.0 port and eight Gigabit LAN ports, adding to this is the gigabit WAN and rest and power input.

On the side of the router, hides a WPS and Wi-Fi on/off button. 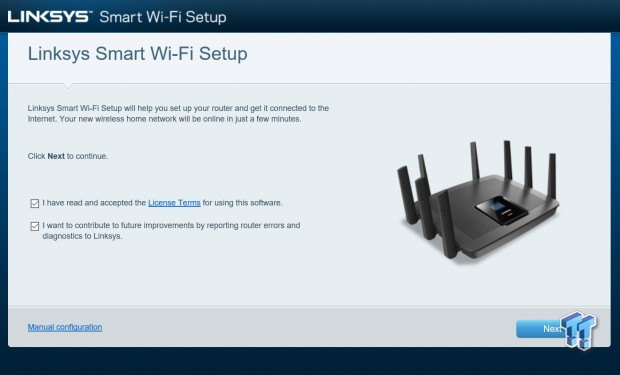 The EA9500 uses the Smart Wi-Fi platform that many Linksys products now utilize. 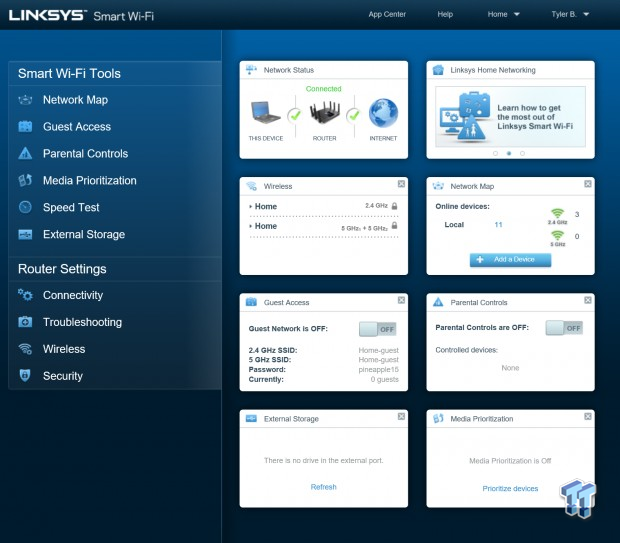 After setup is complete, you land at the screen above. As you can see, the right side gives you a quick overview of everything going on with the router. To the left side, we have a sidebar menu system that includes access to media and parental controls along with external storage setup and a speed test to make sure you're getting the bandwidth you pay for. 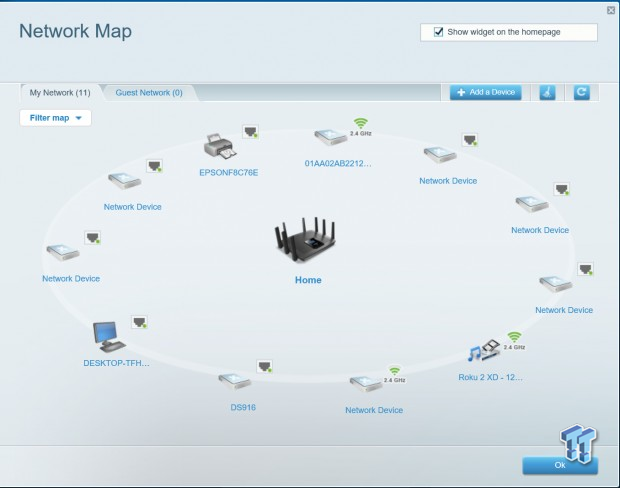 The network map is one of my favorite features as I can quickly see what devices are on the network and can filter devices by connection type if needed. 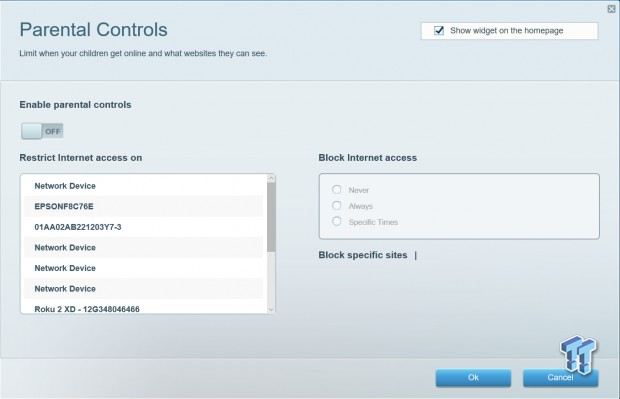 Parental control allows you to block access to specific devices all the time or by a set time period. 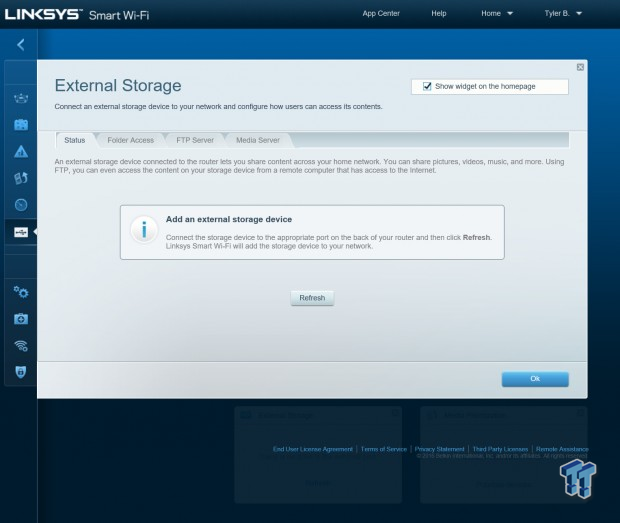 You can configure storage options via the external menu. This includes an FTP and DLNA media server. 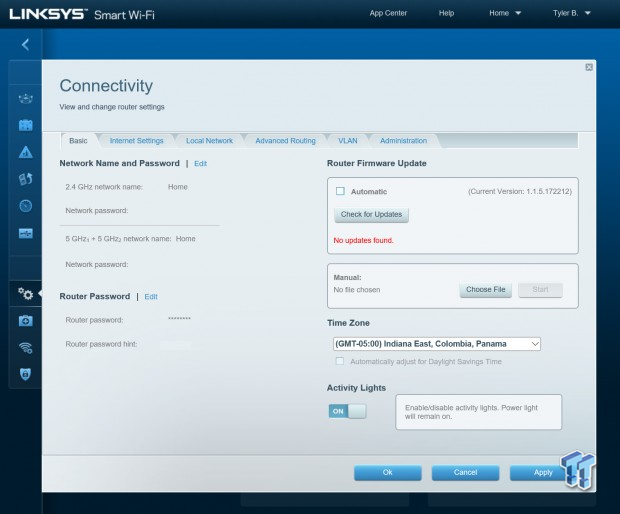 Over on the connectivity menu, you can upgrade firmware along with editing router passwords. 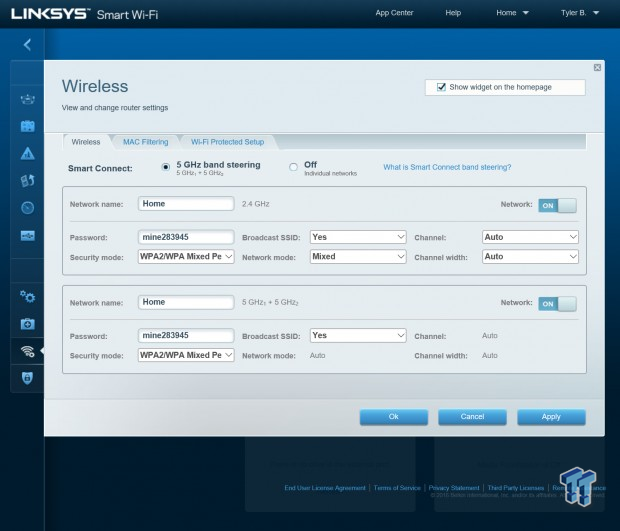 The networks menu has the option for band steering, which automatically chooses the appropriate network for you. You can also disable it and control them yourself. 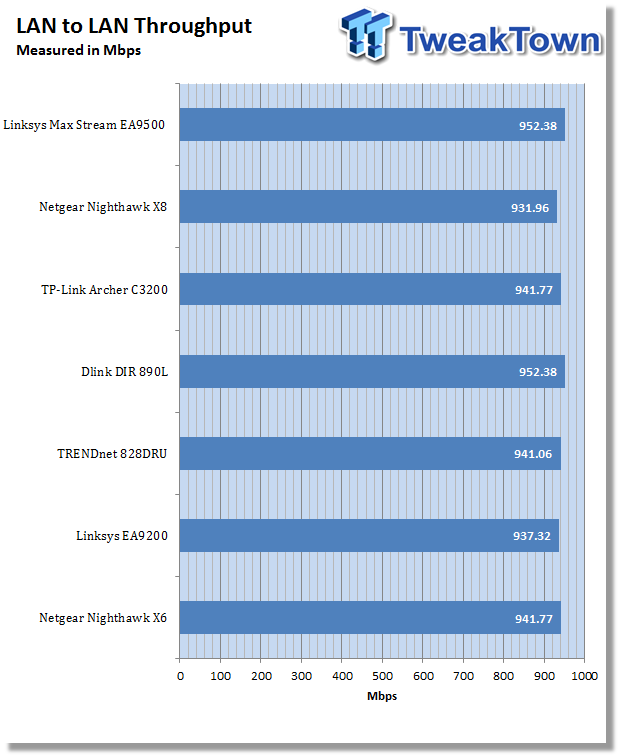 At this point, there aren't many AC5300 or AC5400 solution on the market. In fact, Netgear and Linksys are the solutions I have had in the lab. With this said, the charts will include AC2600 solutions along with the Netgear X8. The EA9500 LAN to LAN throughput topped out at 952 Mbps top marks for this test, done only once before with the 890L from D-Link. 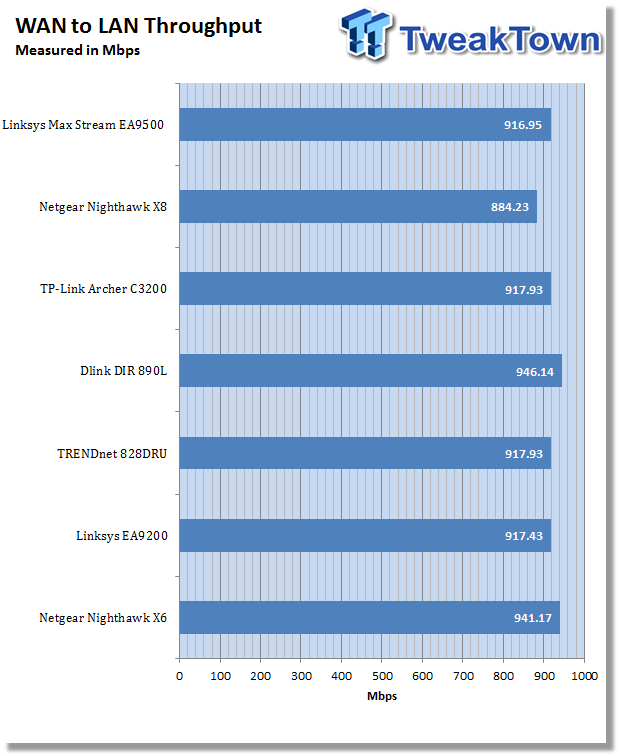 WAN to LAN topped out at 916 Mbps, which seems to be average for all solutions in the chart above. 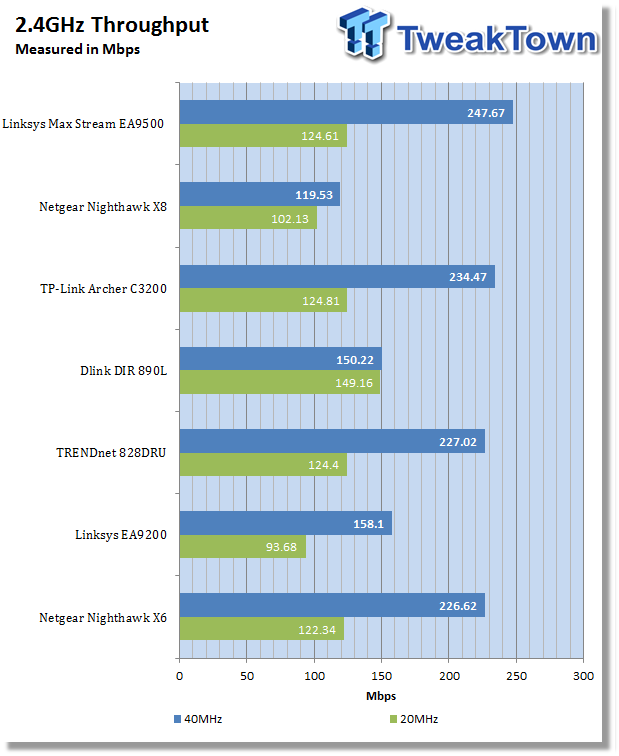 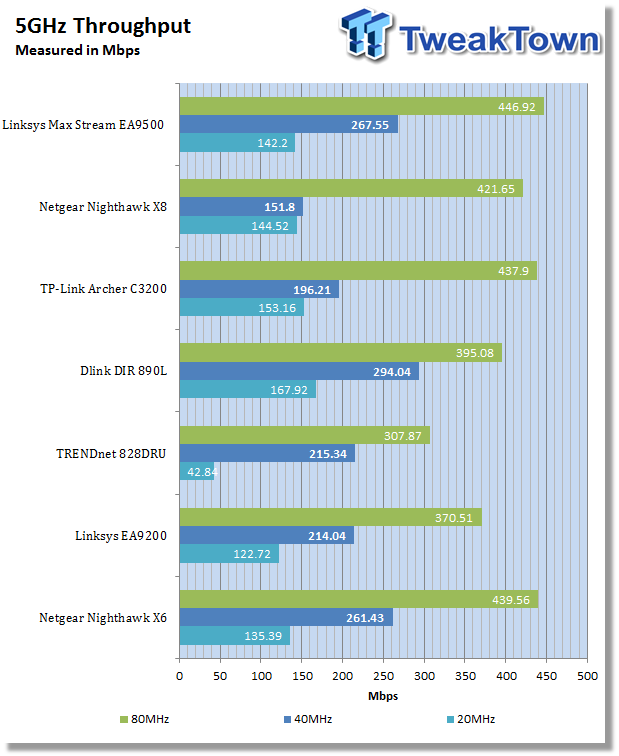 In addition to the normal testing I do, Linksys sent over four of their new WUSB6100M adapters. I put these to use over two different test machines to test the MU-MIMO of the EA9500. In this first test, you can see I have three devices hovering around 100 Mbps for the entire duration of the test.

Adding a fourth device to the MU-MIMO testing, you can see the original three hover between 50 and 75 Mbps while another is off in the distance at 235 Mbps.

For our router file performance testing, I use a SanDisk Extreme Pro 128GB Flash Drive formatted in the FAT32 or NTFS filesystems. I then use NAS Tester 1.7 with a 1000 MB file size and loop it five times with an average result being charted. 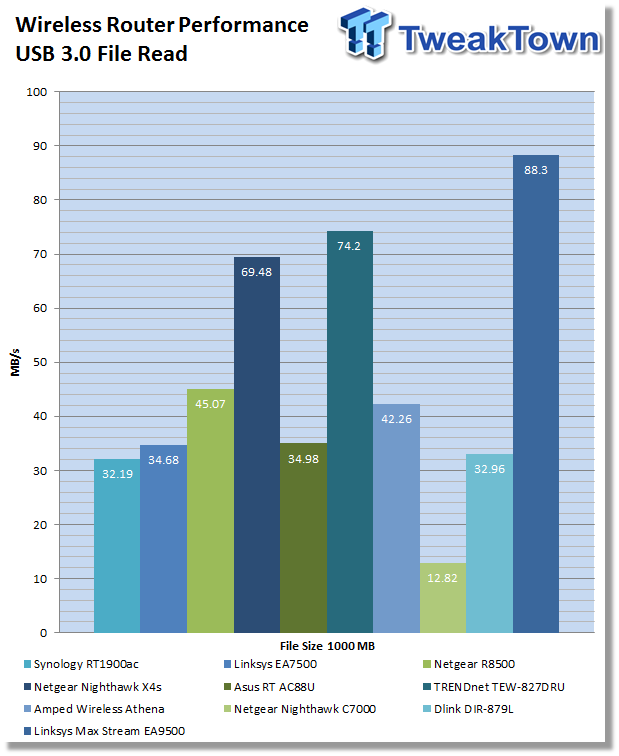 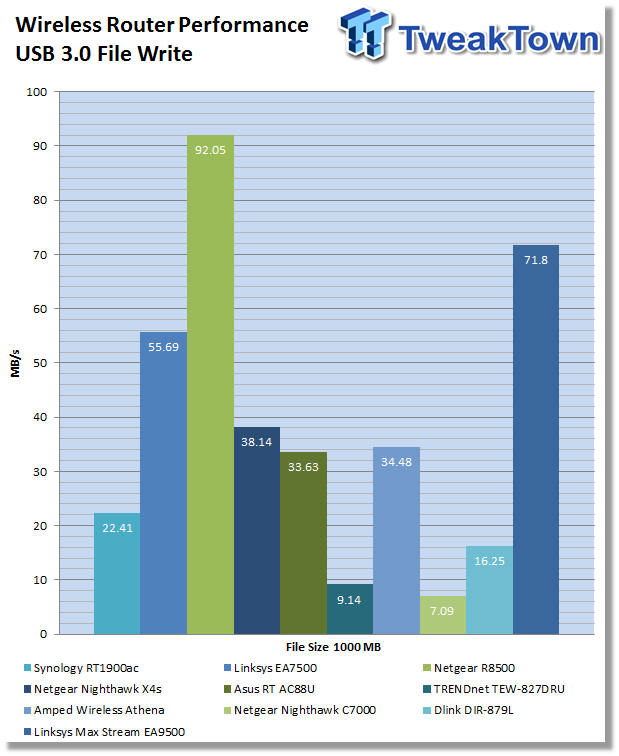 It's hard to deny the Linksys EA9500 is one of the best routers on the market. It topped our charts in everything from LAN to LAN throughput, through 2.4GHz and 5GHz performance, and even into storage performance. This solution is one of the first when paired with a MAX-Stream extender like the RE7000 to offer seamless roaming and it is the first Broadcom AC5300+ class solution to have working MU-MIMO out of the box. Build quality follows the lines of other "EA" solutions although it is much bigger and heavier, solid nonetheless.

Talking a little more about performance, this solution was able to bring in 952 Mbps in LAN throughput which was followed by a favorable showing in 2.4GHz performance at 247 Mbps and a very nice 446 Mbps on the 5GHz band. MU-MIMO showed solid performance for three devices hovering around 100 Mbps each and rounding this out was storage performance which reached 88 MB/s read.

The web management is quite solid on the EA9500 as it has been extensively tested over the last few years in many Linksys models. On the flip side, the Linksys EA9500 does command a high price with its MSRP at $429.99, but if you own a very large home or just want to make sure your network stays in overkill mode for years to come, this could very well be the router for you.

The Bottom Line: Not to repeat myself, but the Linksys EA9500 MAX-STREAM AC5400 wireless router may be big and expensive, but it can handle whatever you throw at it with ease.