ARRIS's SBR-AC1900P is a solid and stable platform that aides consumers in expanding their networks with proven G.hn technology. It also carries top notch 802.11ac performance and plenty of wired throughput for the average home. 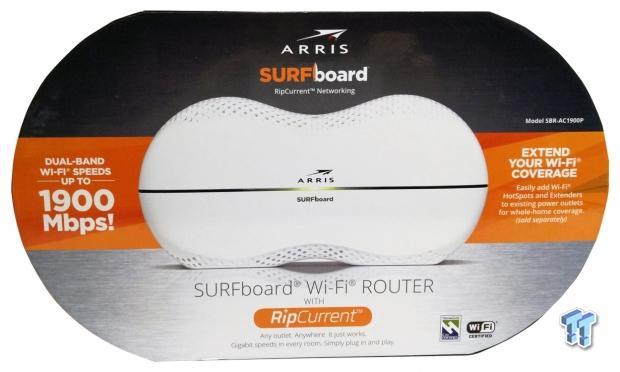 With ARRIS emerging as a consumer brand, we had the opportunity to look at their first solution in the SBR-AC1750. This solution performed quite well and if I remember correctly was one of the higher performing 1750 solutions. With that said, ARRIS is back with some rather interesting technology built into their latest solutions, something they are calling RipCurrent.

The SBR-AC1900P is a mid-range solution and part of ARRIS' new portfolio of RipCurrent products. This solution carries features found in many AC1900 solutions including 600 Mbps capabilities on the 2.4GHz band and 1300 Mbps on the 5GHz. To power this, ARRIS has outfitted this unit with six internal antennas that aide with the unit's beamforming technology. Taking this unit a bit further than most, RipCurrent technology through G.hn and HomeGrid allow consumers to extend their networks using existing electrical lines in their homes and via separate adapters add Wi-Fi Access Points or Gigabit Ethernet. 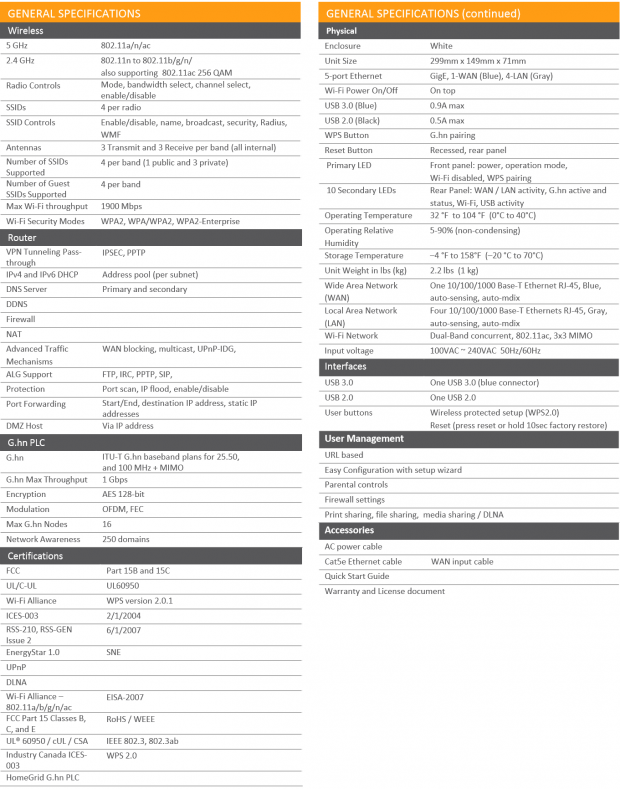 Diving into the specification sheet, we find this solution capable of 256QAM on the 2.4GHz band in addition to the standard protocols for Wi-Fi. We have the 3x3-antenna array mentioned as well with four SSIDs per band with two for guest access. Security modes include WPA, WPA2, and WPA2 Enterprise.

On the G.hn side of things, this solution support 25, 50 and 100 MHz with a max throughput of 1 Gbps with 128-bit AES encryption with up to 16 nodes. On the physical side of things, the SBR-AC1900P includes four Gigabit Ethernet ports next to a single WAN port. For storage and other USB functionality, ARRIS has included both a 3.0 and a 2.0 port.

Packaging for the SURFboard is quite interesting. As you can see, we have an oval shaped box with a large image of the router on the front. Marketing is placed on both sides with performance to the left and mention of RipCurrent below. 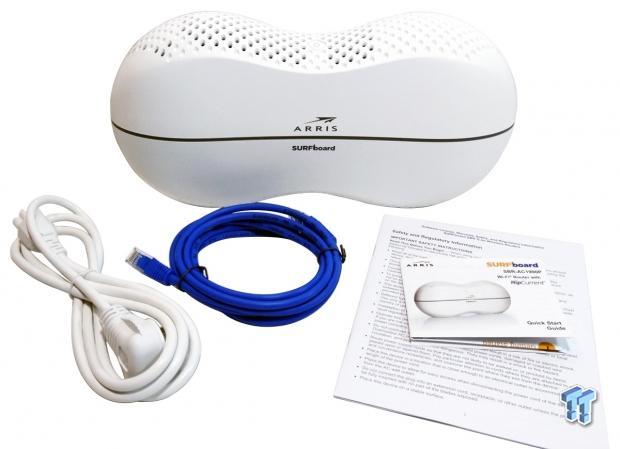 The scope of delivery includes the router at the top followed by a grounded power cable, Ethernet cable, and reading materials. 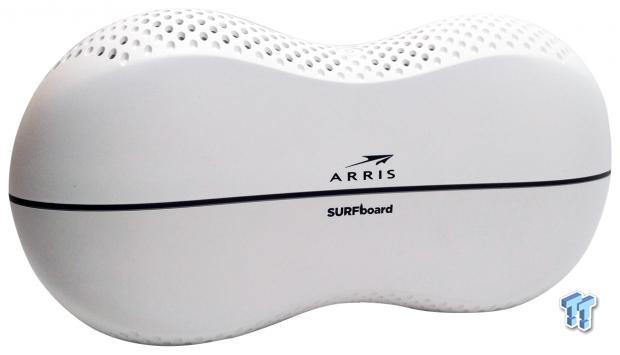 Taking a closer look, the center of the router carries an LED, which depending on color, tells you the connectivity status. 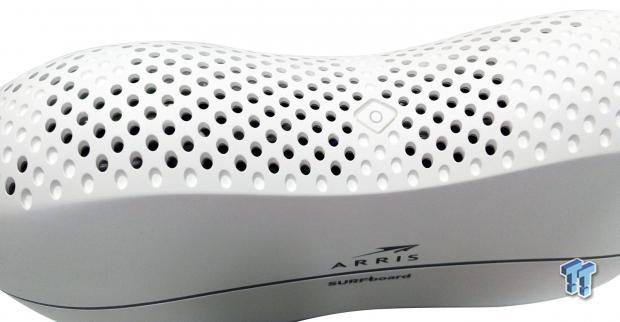 On the top of the unit, we have a Wi-Fi power button in the center. 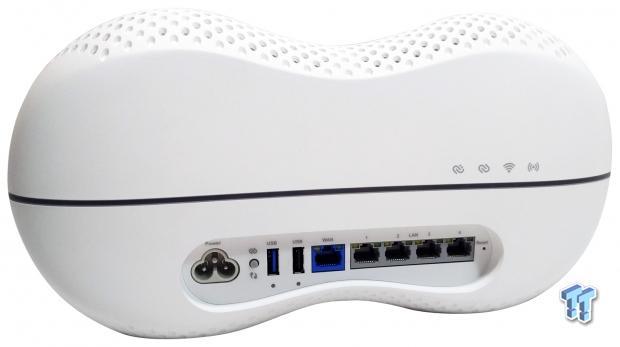 The back of the unit is quite busy, with the power input on the left side followed by both USB port and all five gigabit ports. In between those, we have the small sync button for RipCurrent. 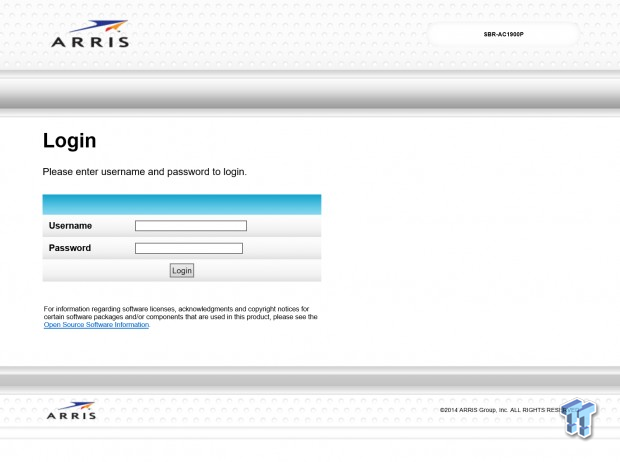 Setup for the ARRIS is similar to the 1750 we tested, although this solution does have the option of using an app for your smartphone. 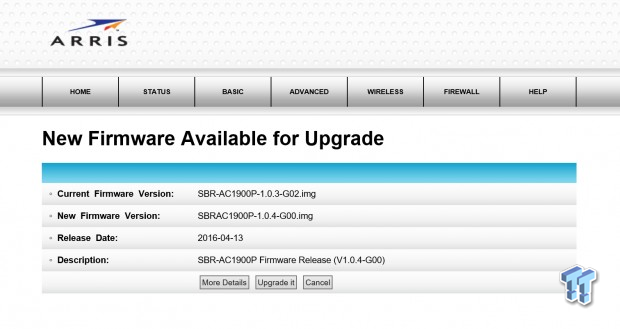 Once I landed inside, the router wanted to upgrade its firmware and after 10 minutes or so it was done. 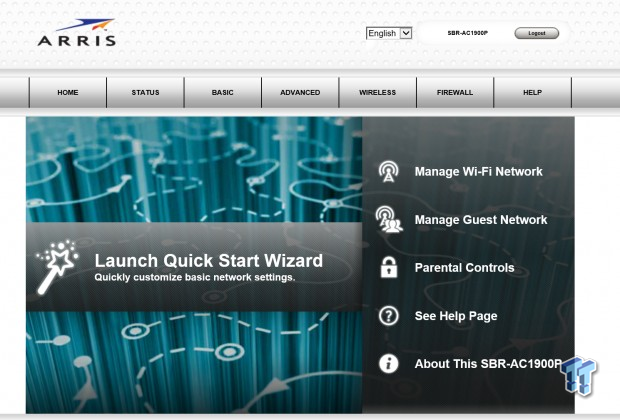 This is the landing menu - above we have tabs across the top with all the controls for the router. 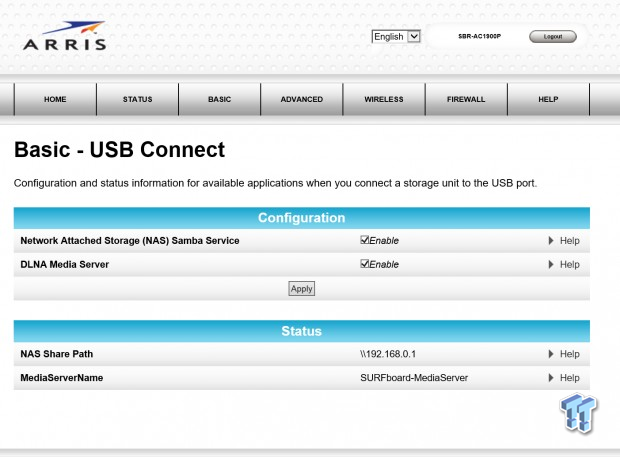 The basic menu has options for USB connectivity include DLNA and SAMBA. 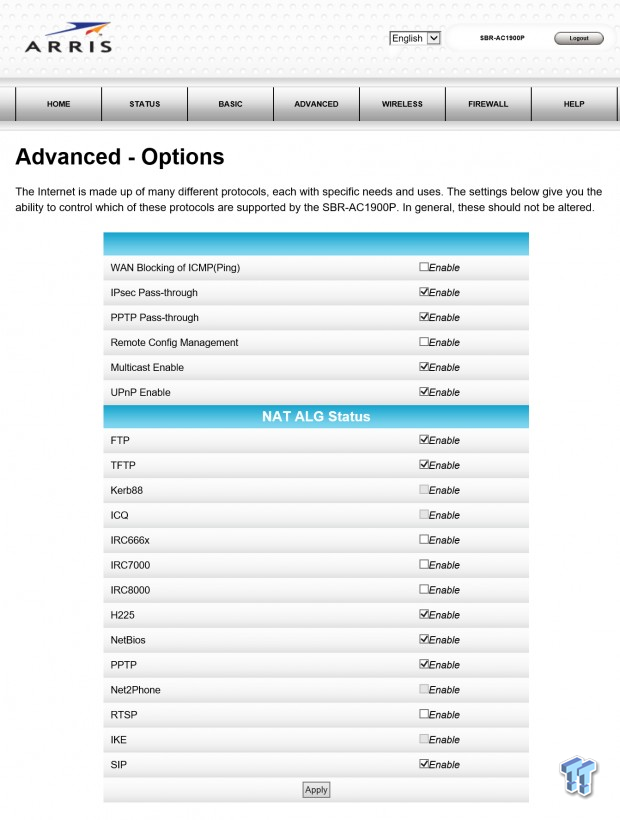 In the advanced menu, you have full access to all the services running on the router. 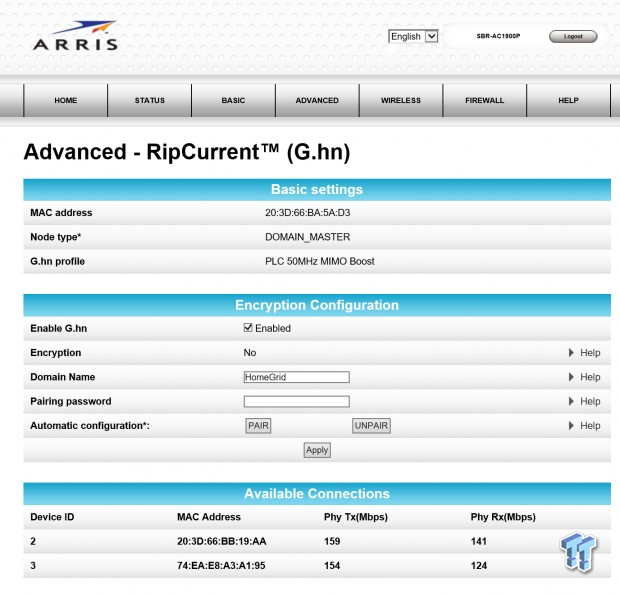 We also have access to the RipCurrent menu, and as you can see below, I have two extenders connected to the router. 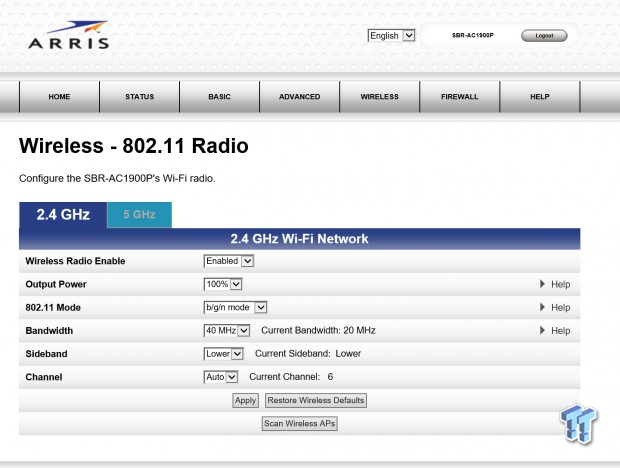 The configuration menu would not be complete without wireless options, so ARRIS gives you two separate tabs. As you can see, you can control the mode, band, and channel along with the output power. 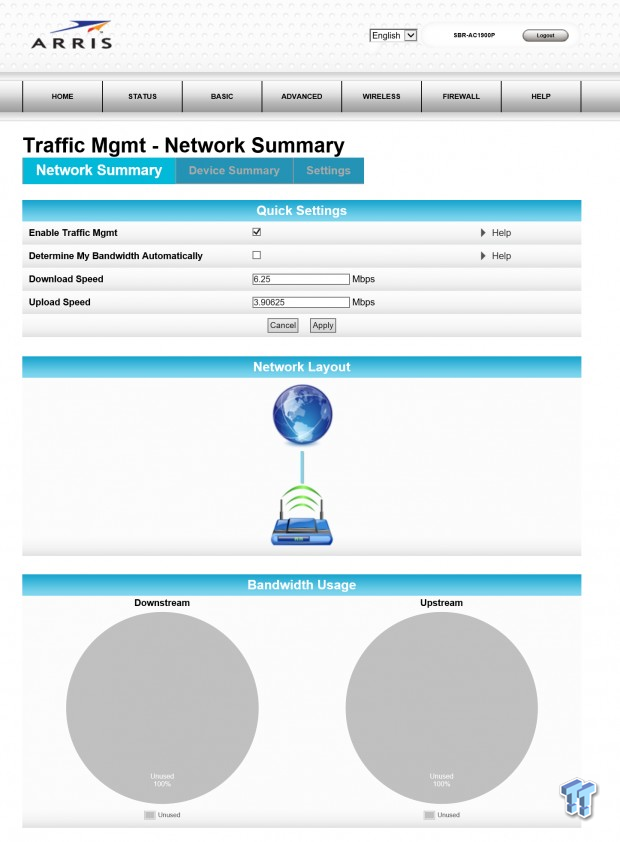 Above, we have the traffic management feature of the router, which is similar to QoS. 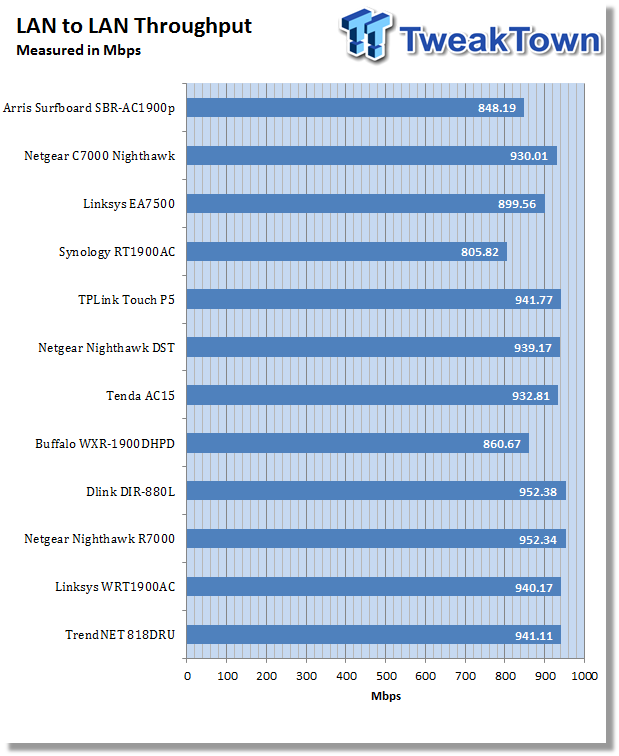 LAN to LAN performance for the ARRIS SBR-AC1900P wasn't the greatest but was certainly respectable at 848 Mbps. 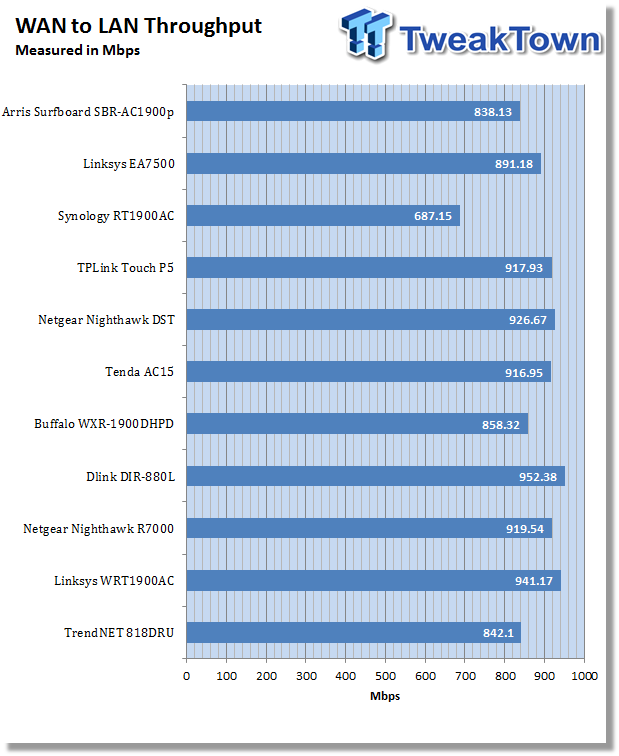 WAN to LAN was not far behind at 838 Mbps, ample enough for most broadband home connections. 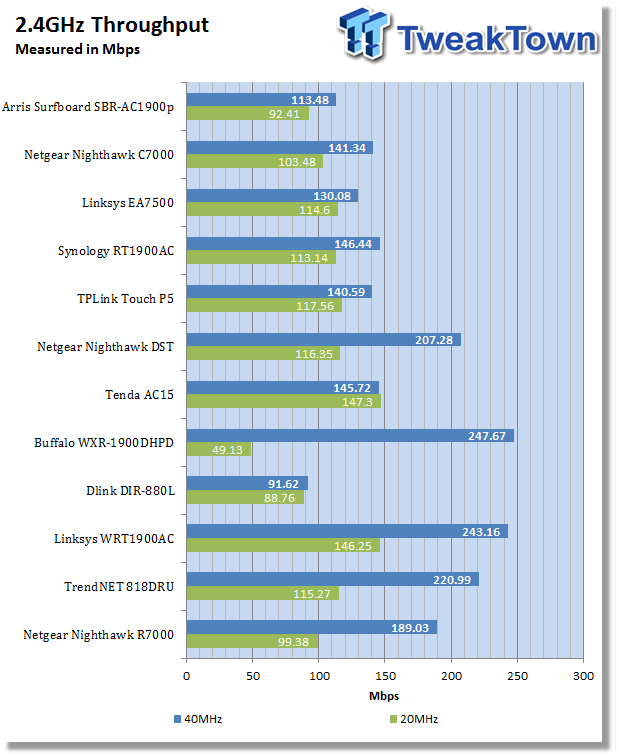 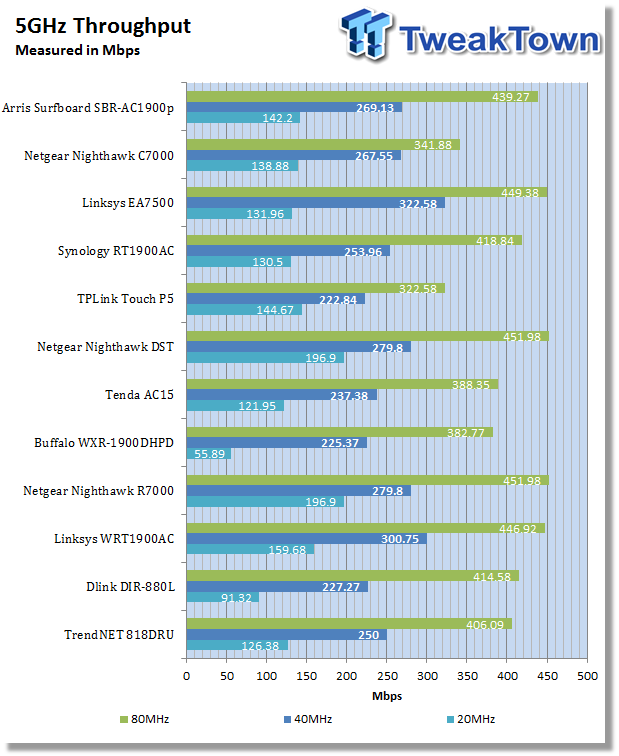 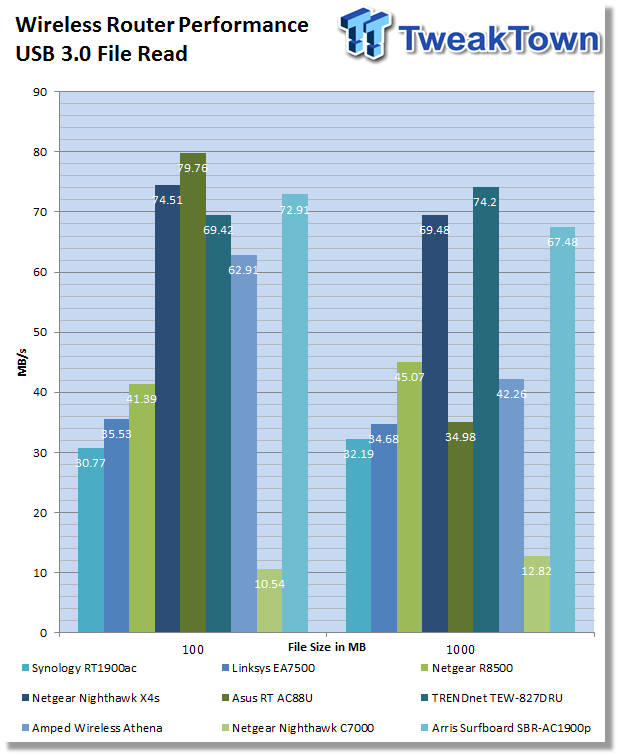 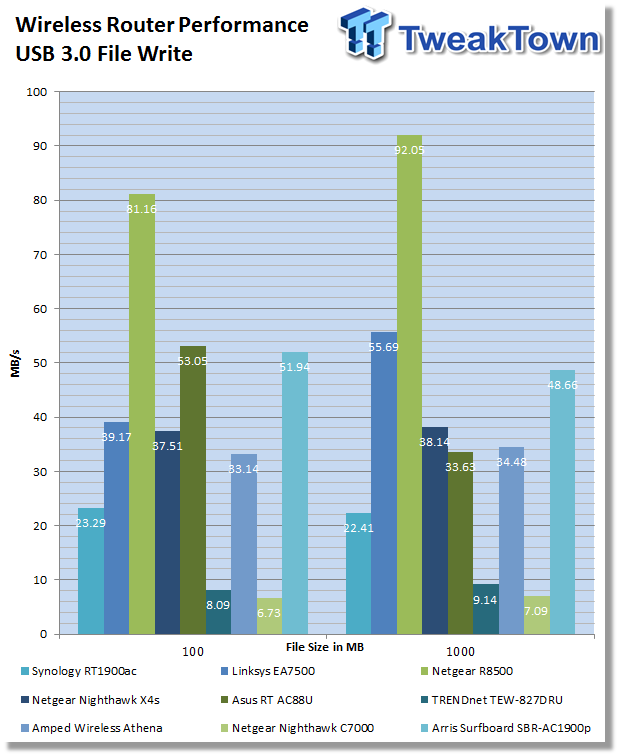 The ARRIS SBR-AC1900P was quite surprising in testing reaching 72 MB/s read in our 100M test and 67 MB/s read in the 1000M test. Write performance too was quite good for a router reaching 48 MB/s and 51 MB/s, respectively.

The ARRIS SBR-AC1900P is quite an interesting solution and even more so the RipCurrent aspect of it. The build quality of this unit is rather solid. As a matter of fact, I looked around and even tried to open it up, but ARRIS has sealed it up good. The RipCurrent technology is certainly a welcomed addition to any home network and worked flawlessly with very little effort.

On the price front, the SURFboard SBR-AC1900P is advertising an MSRP of $199.99. This puts this solution at the top end of the AC1900 market with some solid competition from Linksys with the WRT and the R7000 from Netgear. Warranty, however, for the ARRIS SURFboard sits above the industry standard at two years.

The Bottom Line: ARRIS's SBR-AC1900P is a solid and stable platform that aides consumers in expanding their networks with proven G.hn technology. It also carries top notch 802.11ac performance and plenty of wired throughput for the average home.