When I started here at TweakTown back in early 2013, 2.5-inch hard drives were pretty comfortable with a 1TB capacity. Shortly after that, that capacity was increased to 2TB with our introduction coming when we shucked a 2TB Toshiba drive out of the HV620 from ADATA. Now three years later, we have yet another milestone as 2TB drives have gone thin and 4TB drives hit the market with the latest technology from Seagate.

As most of you know, LaCie has been positioned as the premium brand for Seagate and as such often gets the use of new technology before the mainstream products. The latest to come out of the lab at LaCie is a new solution in the Porsche design garage. This solution boasts the largest capacity we have seen in a 2.5" enclosure at 4TB while additional capacities include 1TB and 2TB solutions with all three models using the USB-C connector. LaCie has laid no claim as of this writing regarding expected performance from the 4TB Mobile Drive and as such we will just have to see what it can do in our testing.

Compatibility of this drive extends to both Windows and OS X platforms with a USB C connection recommended. MSRP of the 4TB Porsche Design Mobile Drive lands at $229.99 with a two-year warranty. 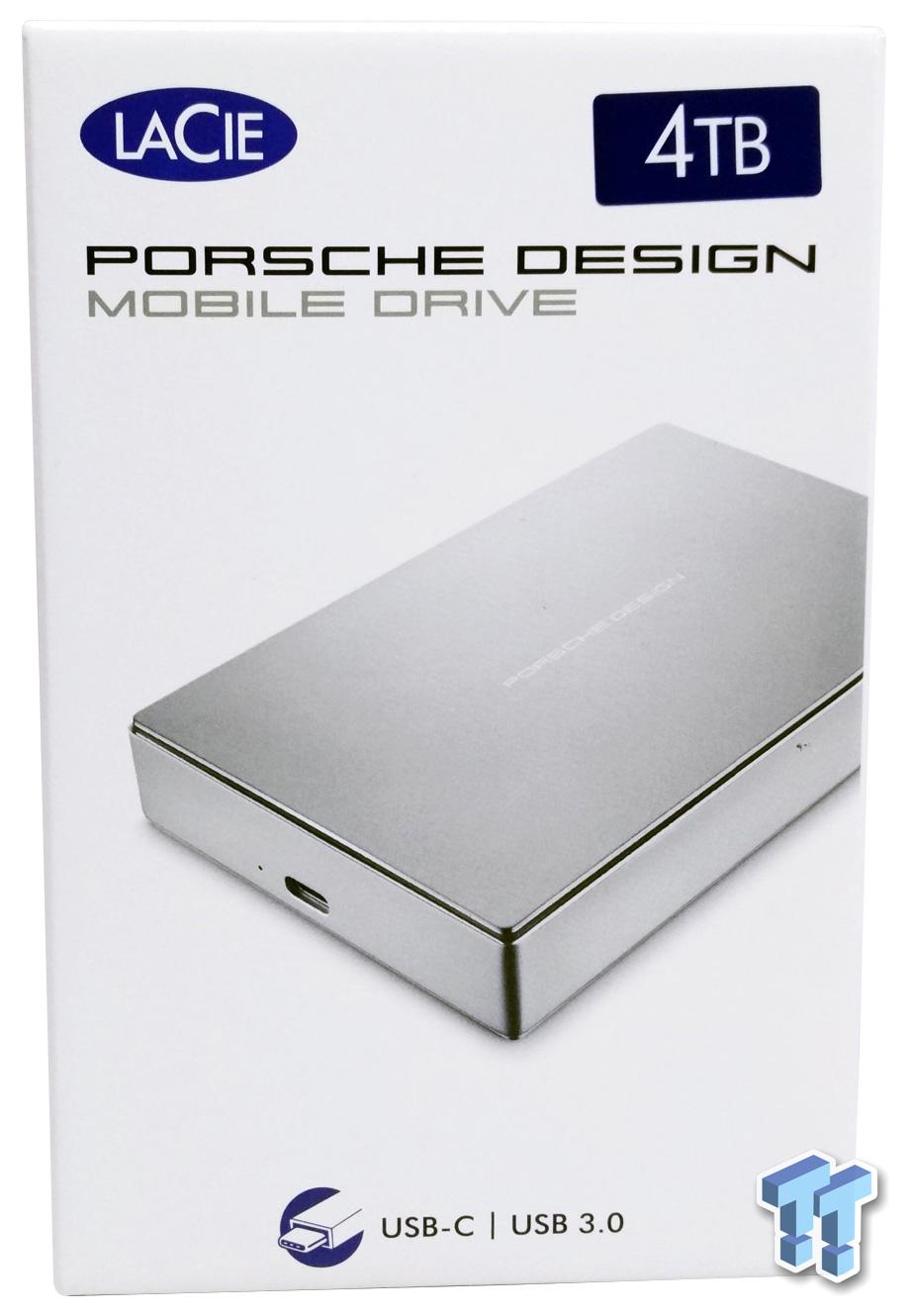 Packaging for the drive is very clean and certainly has that industrial yet sophisticated feel to it. An image of the drive is presented on the front with capacity listed at the top. 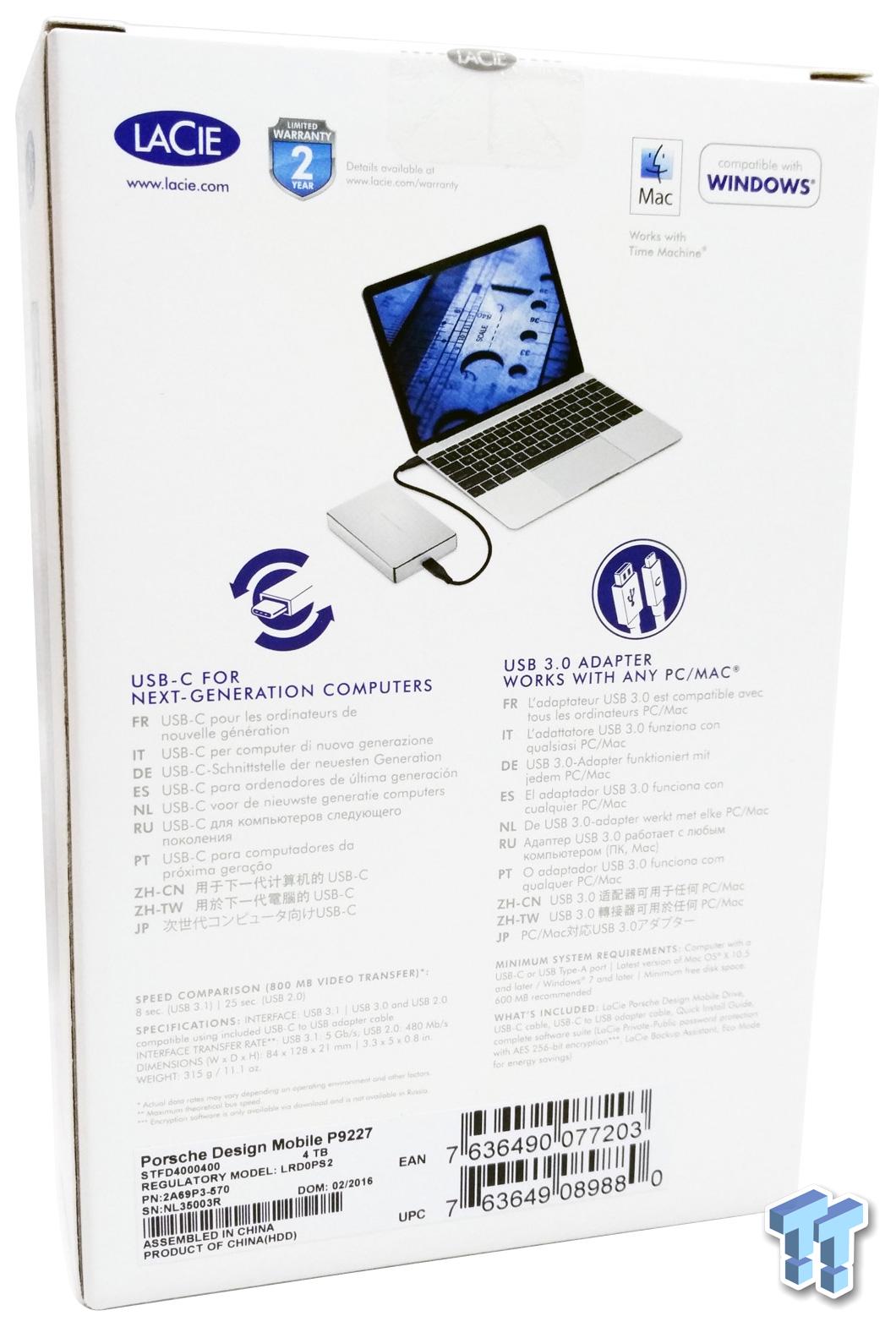 On the backside, warranty information is listed at the top while OS compatibility is to the right. 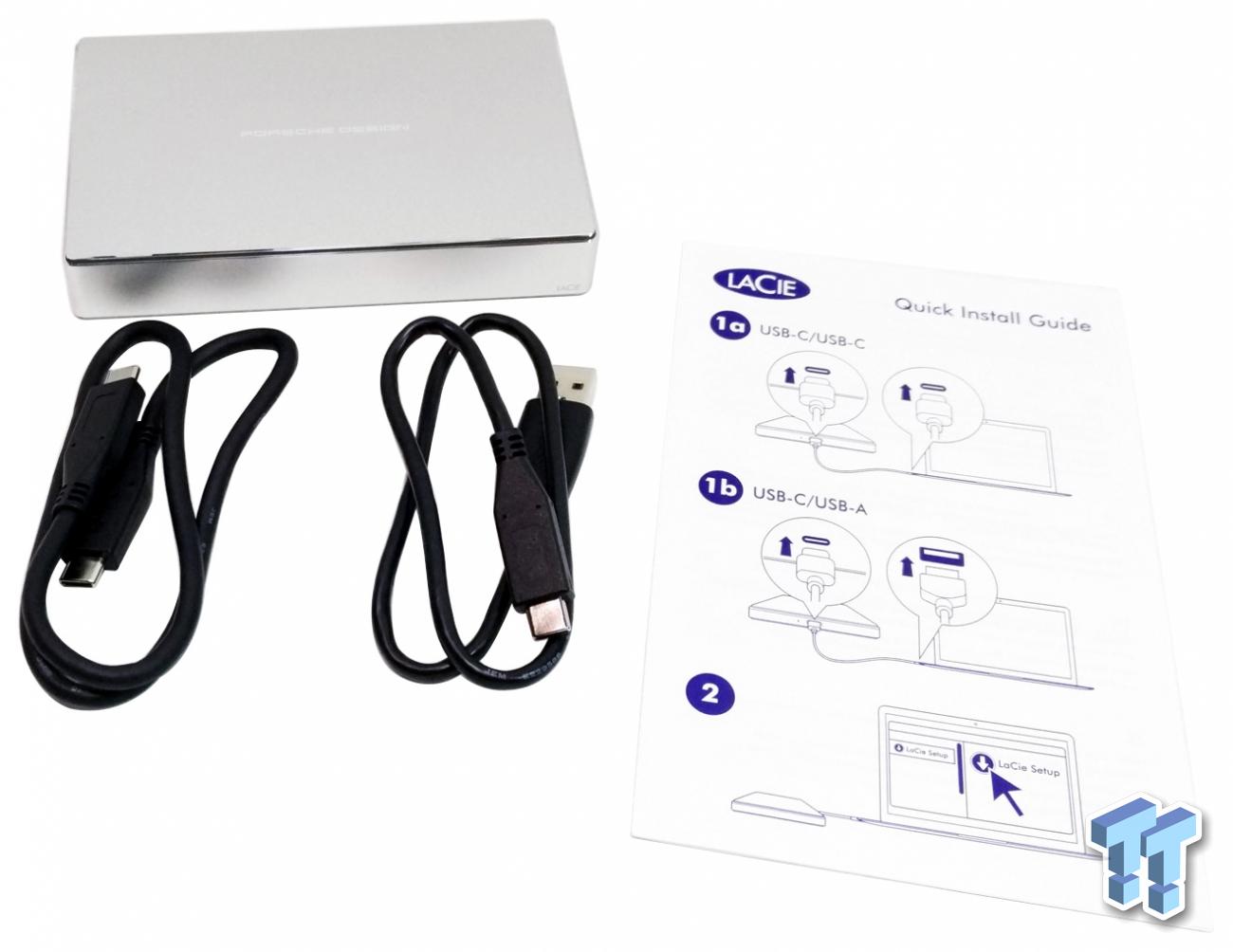 The scope of delivery includes the Mobile drive and USB C cable, with LaCie including a Type-A to USB C cable as well.

The bottom edge of the drive has just a touch of branding with the LaCie logo while the top stays true to the simplicity with a simple Porsche Design logo. 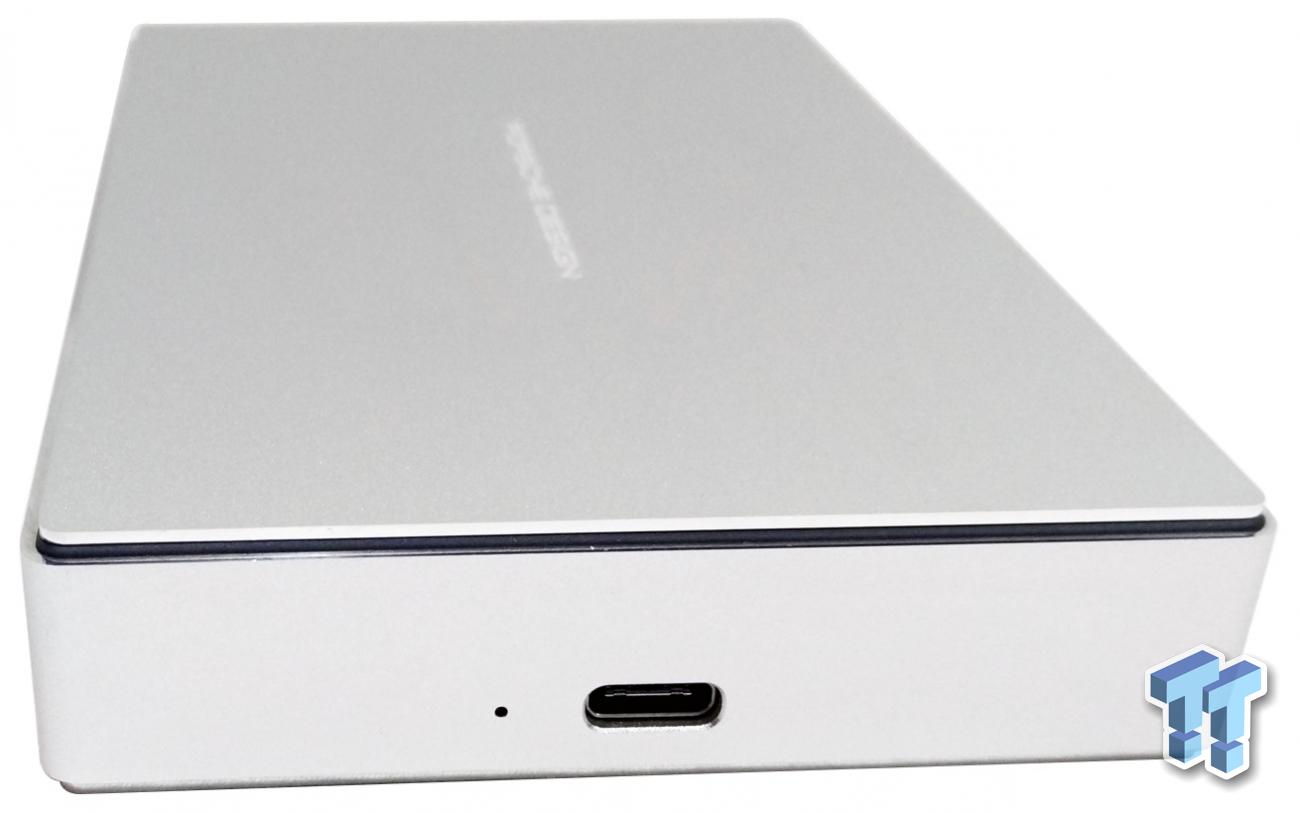 Over on the end, we have the USB C connection with a small LED. 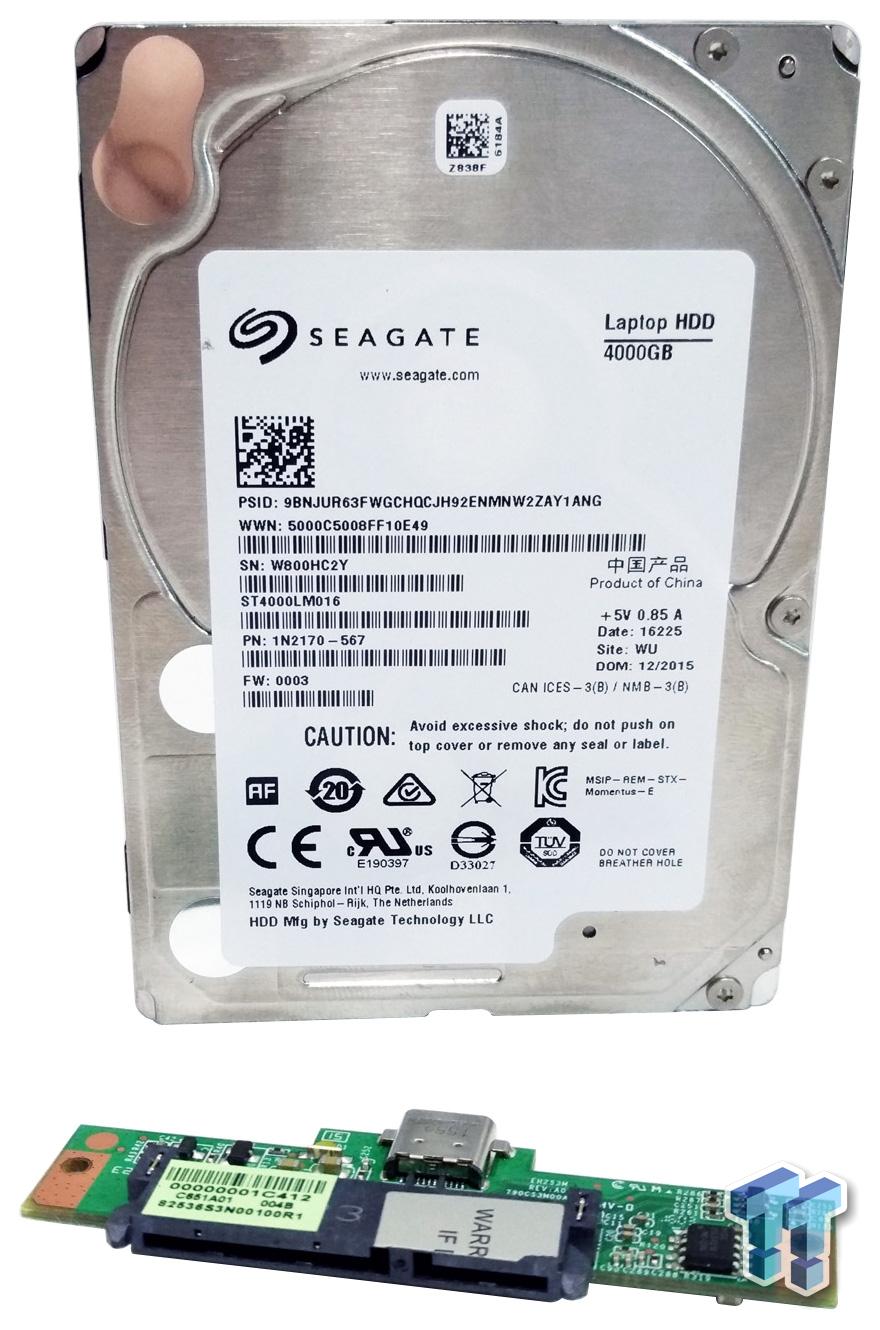 Buried deep inside the LaCie drive is the Seagate Laptop HDD in its 4TB capacity. 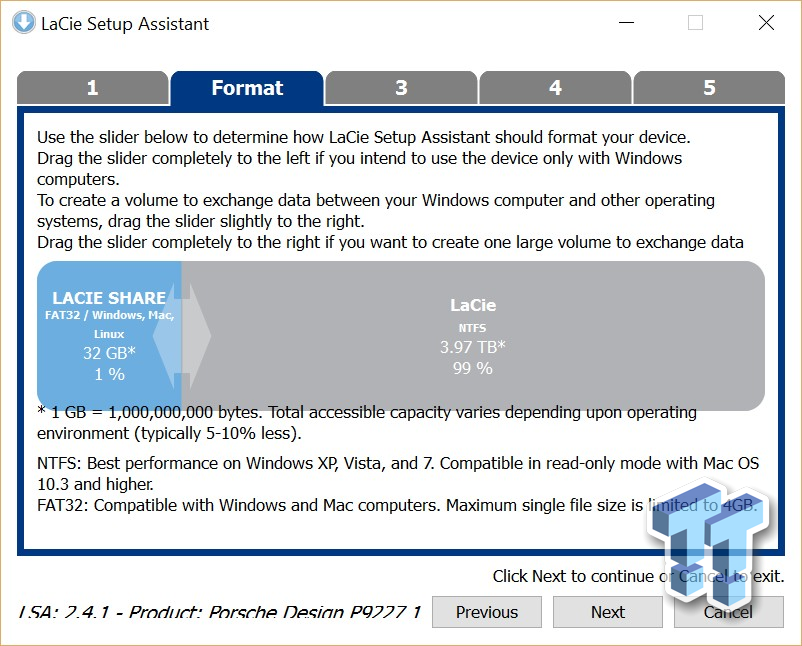 When you first connect the LaCie Mobile, you will need to go through this quick setup that partitions the drive. 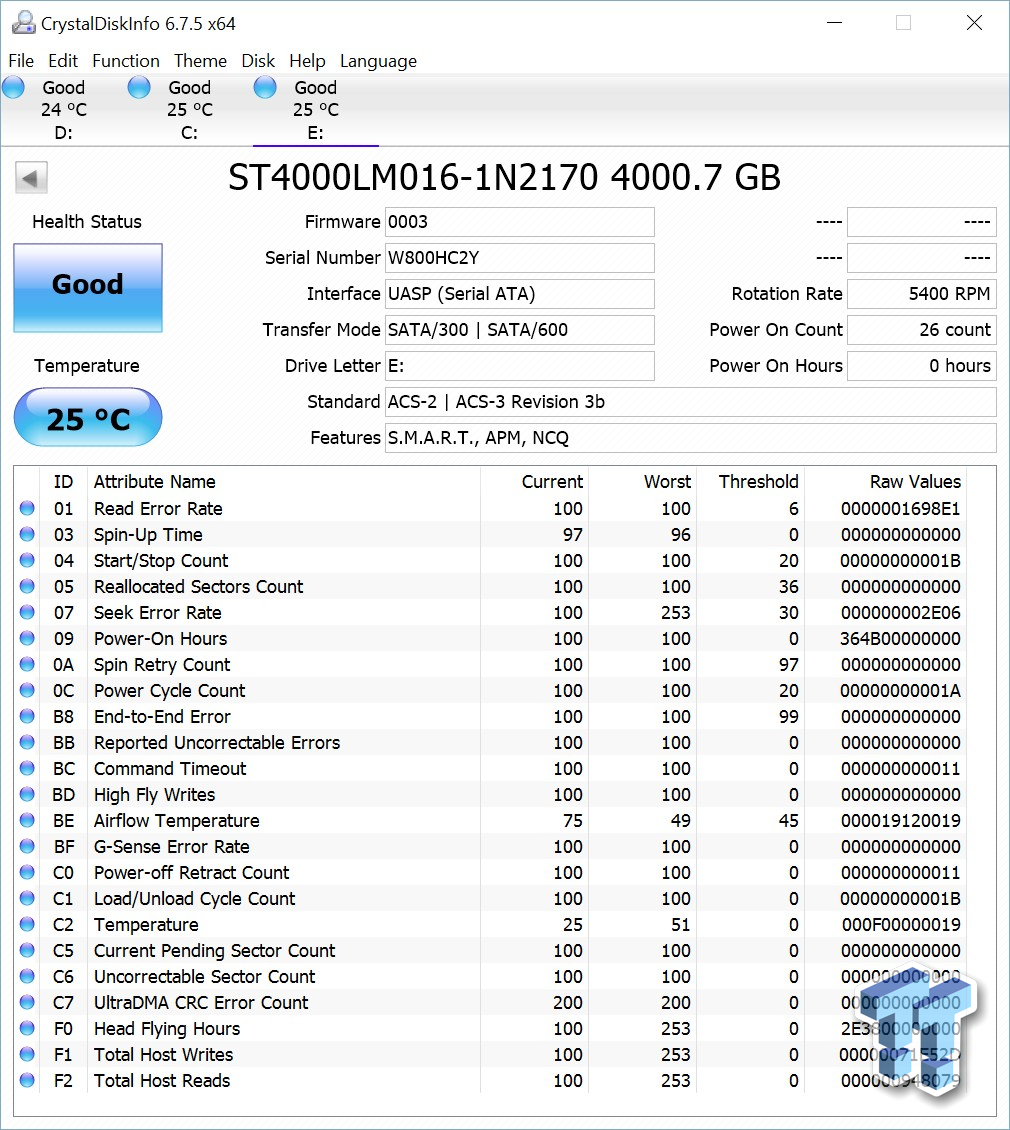 Connecting the LaCie to our PC and opening up CDI, we found this drive is, in fact, using UASP. Looking at the model number and a quick Google reveal this may be similar to the Samsung M10P, which Seagate launched last year with 800GB platters assumedly using SMR. 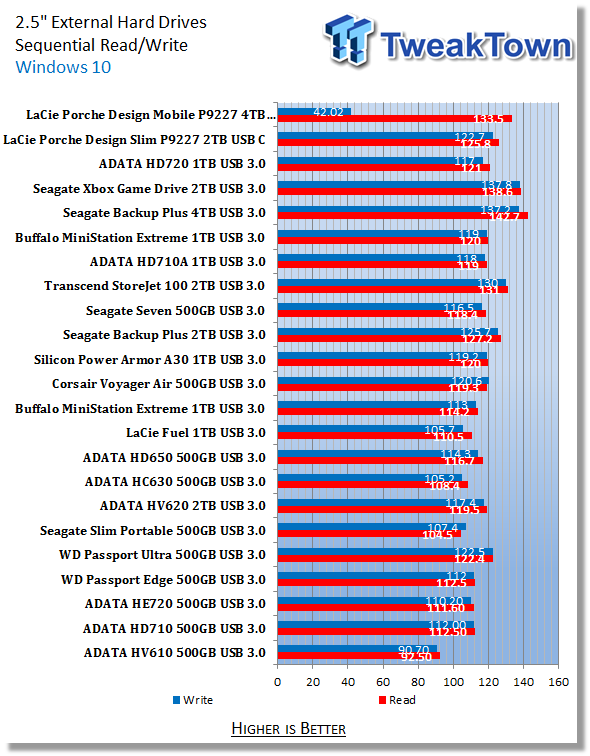 In our testing, using both CDM and Anvils storage utilities, the performance of the LaCie drive was interesting, to say the least. I was able to reach 133.5 MB/s read with ease but write performance seemed to stay back topping out at 42 MB/s, most likely due to the drive's design and the cache being filled. 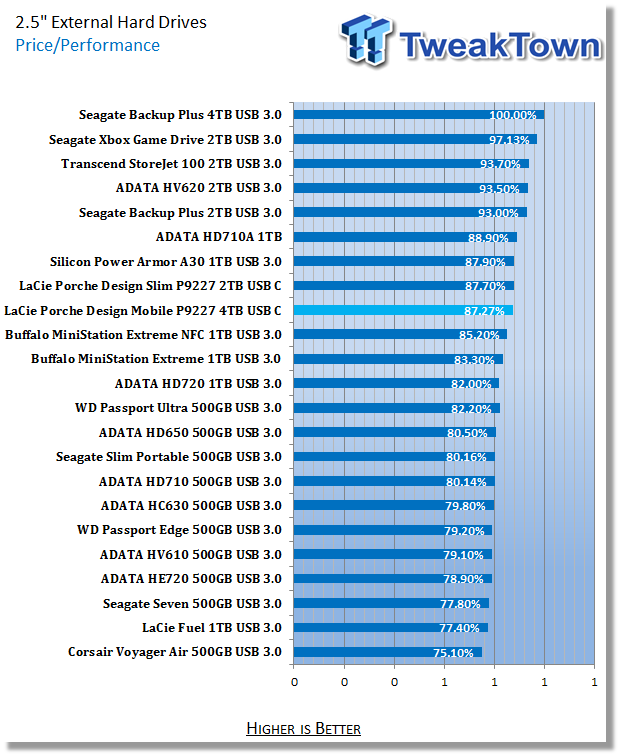 Price/performance for the P9227 Mobile lands this drive towards the top half of drives in our chart with a nice 87.2% rating.

In closing, I very much enjoyed the build quality of the P9227 Mobile Drive and even though in the end I did end up shucking the drive from its enclosure for images, that didn't come without a fight. In constructing the enclosure, both top plates are glued tight with what appeared to be a silicon-based adhesive, the drive itself it also tucked away with anti-vibration mounts that allow you to remove it only one way. On the PCB, LaCie used the ASMedia 1153 chip which is pretty popular with USB 3.0 enclosures, though this time it has been paired with the ASM 1542 switch for the reversible connectivity of the USB C connector.

The performance of the Mobile Drive was quite good with read speeds reaching near 135 MB/s while write performance was rather low at 42 MB/s. Price/performance was kind to the drive allowing it to land near the middle at 87% rating.

Overall, the LaCie P9227 Mobile is a solid drive, and while write performance does suffer slightly from the use of SMR, this drive is meant for its storage capabilities more so than its performance. In the end, this drive offers rather nice read performance with tremendous capacity for a 2.5-inch solution all bus powered by the USB C connector.

The Bottom Line: LaCie's Porsche Design Mobile Drive may not have all the performance the USB C connector can handle, but it does give you 4TB of capacity in a small bus-powered solution.