Producer J.J. Abrams owns a well-deserved reputation of surprise, recently reinforced following the reveal of a sequel to the 2008 sci-fi found film epic Cloverfield, dropped via the release of a mysterious trailer which barely hinted at the film's plot. That trailer quickly stoked disparate questions and theories about exactly how 10 Cloverfield Lane fits with its predecessors, with seemingly no suggestions too outlandish. Well, luckily the wait wasn't too long (I, for one couldn't stand it), and the film's here and with it are all the answers. Well, most of them anyway. 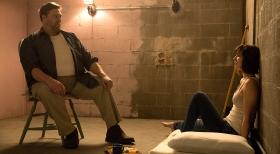 After severing her relationship with her fiancé, Michele (Mary Elizabeth Winstead) takes a drive while reports filter in over the radio of power outages and disturbances. Following a brutal accident which rams her vehicle off the road, she later wakes in a dank cellar, chained to the wall.

Howard (John Goodman) explains that he rescued her during an attack, which ended civilization and has forced them to live in his underground bunker. Joined by young local Emmett (John Gallagher Jr), who helped build the shelter, Michele is confused and untrusting of the version of events she's been told and promptly plots her escape to the outside world. 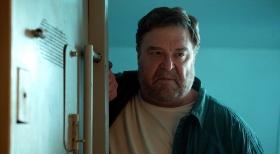 Starting life as the self-contained thriller The Cellar, with absolutely no links to the Cloverfield mythos, J.J. Abrams saw the potential in John Campbell and Matt Stuecken's script, promptly bringing it under the umbrella of his production company Bad Robot, making a few changes and slapping the Cloverfield badge on it. Would it have been equally as compelling in its original form? Sure. But are more people interested in seeing it as a result? You betcha - and that's not a bad thing at all. 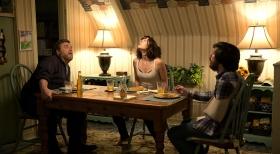 For a film in which the vast majority takes place in some very tight confines, 10 Cloverfield Lane lives or dies based on the strength of its performances, and the film soars with some excellent casting decisions. John Goodman, in particular, shines in the role of mysterious benefactor Howard, who may or may not be the kind hearted soul that he portrays himself. Is he insane or are his ominous warnings of the outside world based on fact?

Goodman's carefully measured performance goes a long way to preserving the truth right until the end. Far more than a mere passive victim, Mary Elizabeth Winstead imbues her heroine with equal parts resourcefulness, and vulnerability, and gives the audience plenty to latch onto, as her battle for survival becomes ever more desperate. I've also no doubt that 10 Cloverfield Lane will prove the breakout role for John Gallagher Jr, who's character's history with Howard gives cause for alarm. 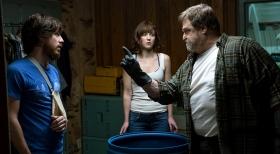 The question on everyone's lips is just how 10 Cloverfield Lane fits in with its predecessor. The truth is - it doesn't really at all. In ditching not only the found film premise of the original Cloverfield, but also the characters, the monster and well, the entire genre as well, 10 Cloverfield Lane has precious little in common with the original. Perhaps the events of this film take place concurrently? With no point of reference, we can only speculate. Ultimately, 10 Cloverfield Lane is a high profile, but economical experiment in film marketing and its branding is superfluous. Whatever the film was called, it would be equally as riveting and nail-biting, with a film that surpasses its predecessor in every way - whatever its relationship actually is. 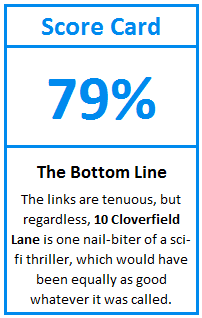