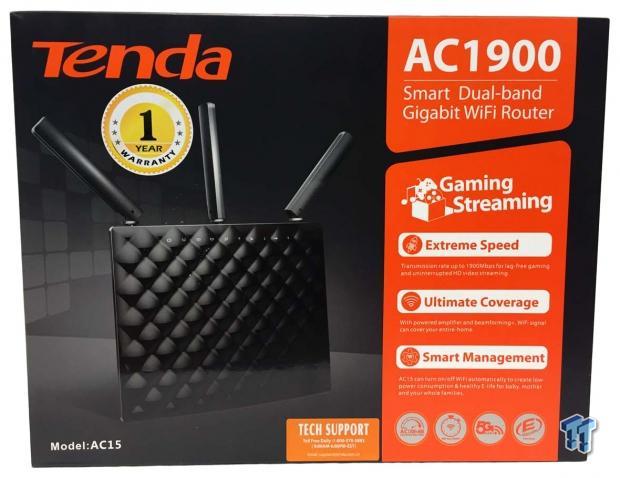 With the wireless networking market as wide open as it is right now, we sometimes get introduced to vendors that are not so well known. Tenda, while having been around for quite some time, is one of these vendors. With their latest wireless solution, the AC15, they have released a top tier offering for consumers.

The AC15 is a dual-band AC1900 wireless router, that like other solutions in this segment enables 600 Mbps on the 2.4GHz band and 1300 Mbps on the 5GHz band. Additional features such as Beamforming+ technology boosts range for 802.11ac devices while high powered amplifiers and the three external amplifiers allow broad coverage. Tenda has intuitively allowed access to a USB 3.0 port for personal storage and printer sharing while the underlying hardware platform includes a dual-core Broadcom BCM4708A processor and 256MB of DDR3 memory. Along with this solution's dual-band capabilities, the LAN side of this router offers three Gigabit ports with a single Gigabit WAN. 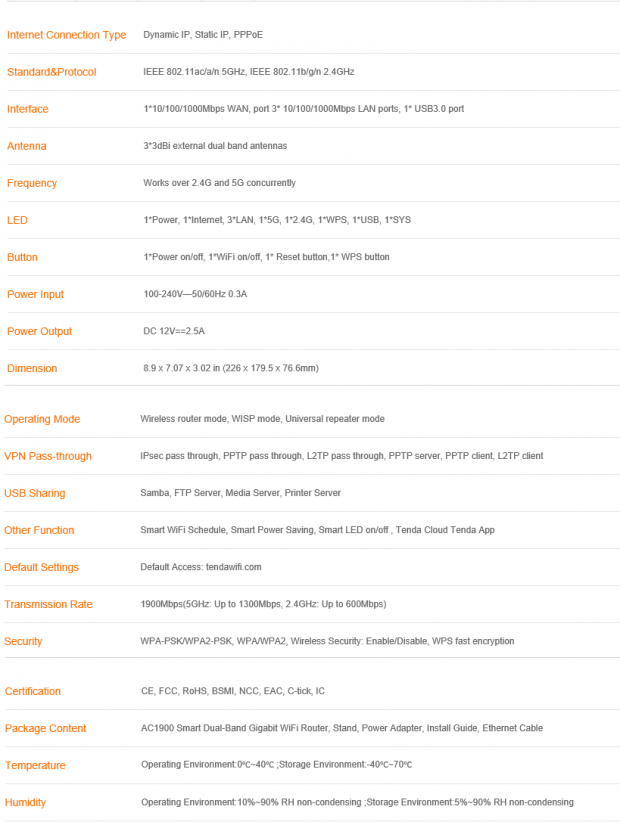 Looking at the device specifications, standards protocol makes this both an 802.11a/n/AC and 802.11b/g/n compliant solution. Next, we have mention of the 3 LAN and 1 WAN ports at gigabit speeds along with its USB 3.0 port. The three external antennas operate at 3dbi with concurrent dual band capability. Further down operating modes are listed as Router, WISP, and Repeater with a number of integrated services.

MSRP of the Tenda AC15 Wireless Router sits at $89.99 with a one-year warranty.

Packaging for the Tenda AC15 carries marketing information to the right while an image of the router sits to the left. 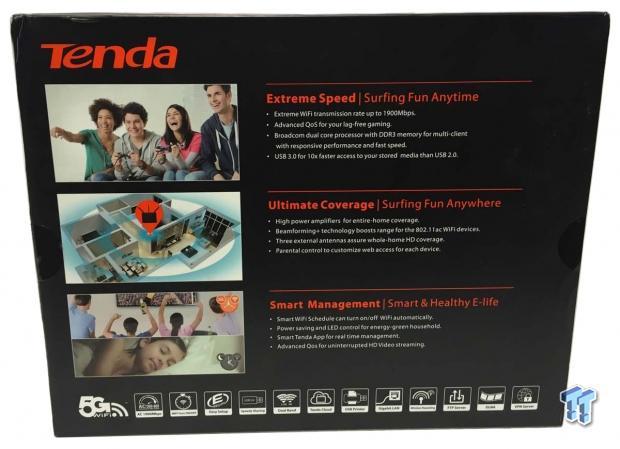 The back of the box carries the Broadcom 5G logo at the bottom along with additional features. 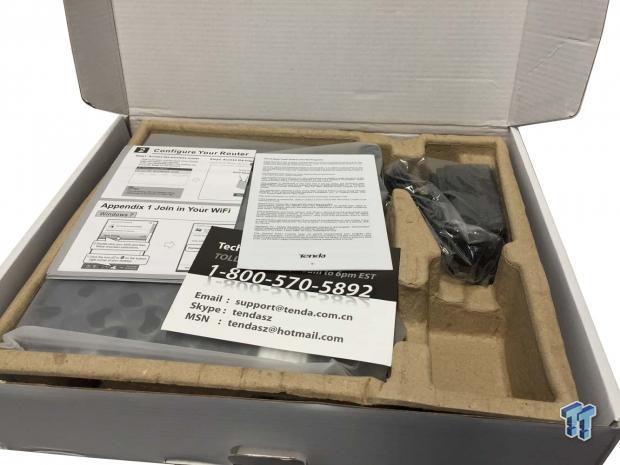 Opening the packaging, we have everything packed securely including plenty of reading materials laid on top. 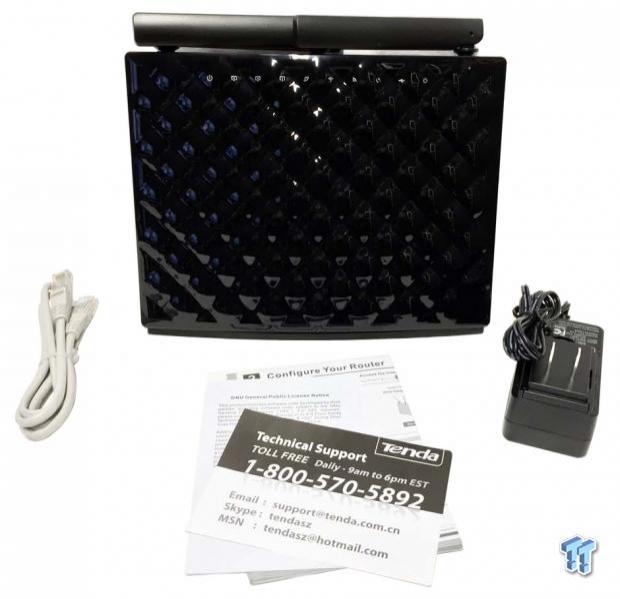 First impressions of the AC15 show off its extremely glossy exterior while below we have the scope of delivery that includes an Ethernet cable and power adapter. 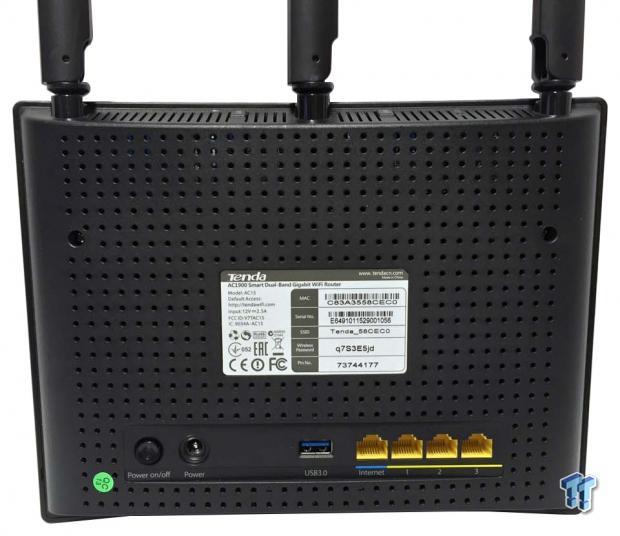 The backside of the router houses the power button on the far left followed by the power input, USB 3.0 port and the three LAN and single WAN port. 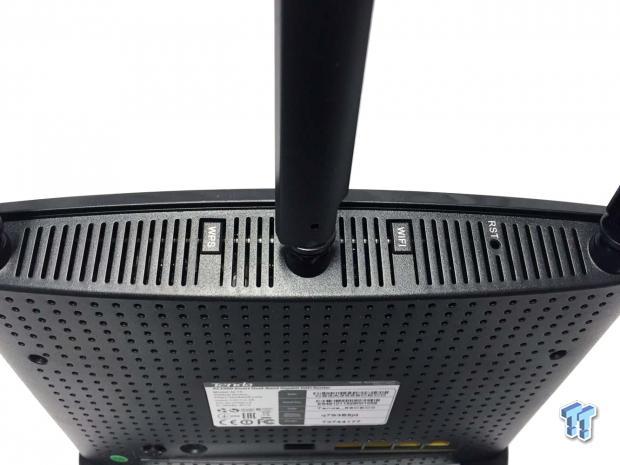 On top of the router, Tenda has placed the WPS and reset buttons along with an unusual feature of a button to disable Wi-Fi. 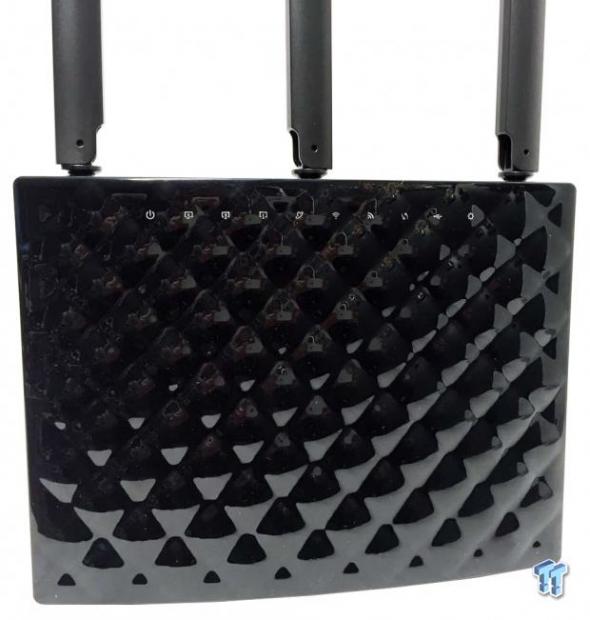 A closer look at the front of the router reveals a line of LEDs for things such as power, connectivity, and USB among others. 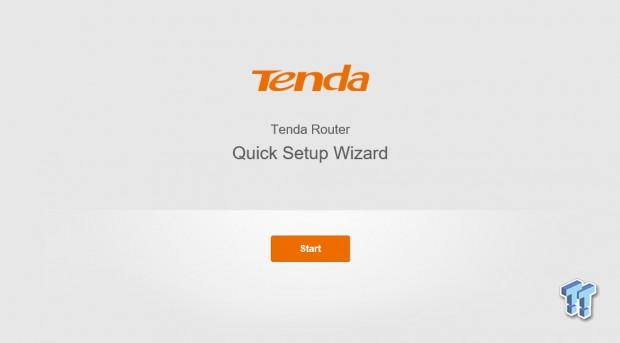 The Tenda AC15 uses a quick setup wizard to have you up and running very quick. 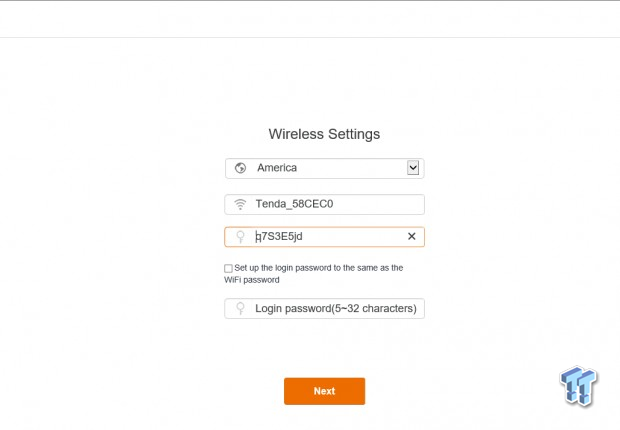 In this first step, you have the option to setup your preferred SSID along with its password. 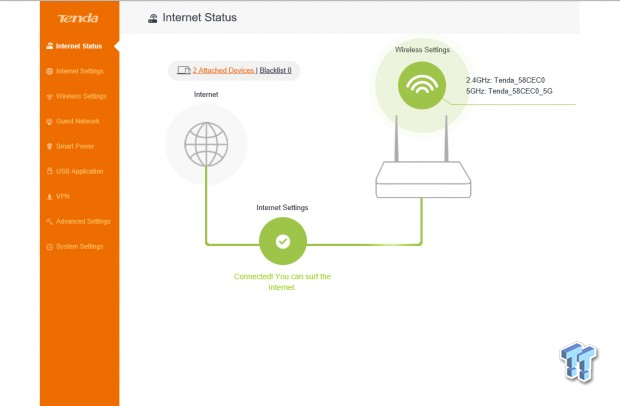 Once setup is complete, you enter the Web GUI, which is a rather sleek interface.

The Menu is listed off to the left, and the Wireless settings item allows you to change SSIDs, passwords and schedules. 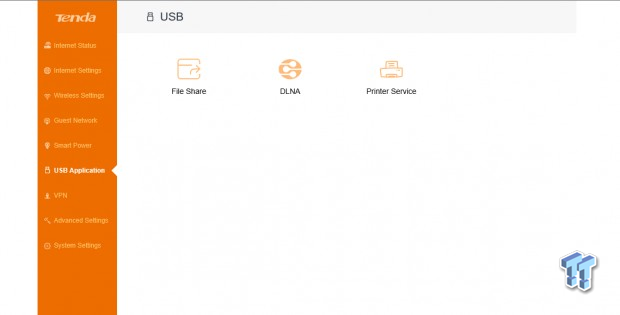 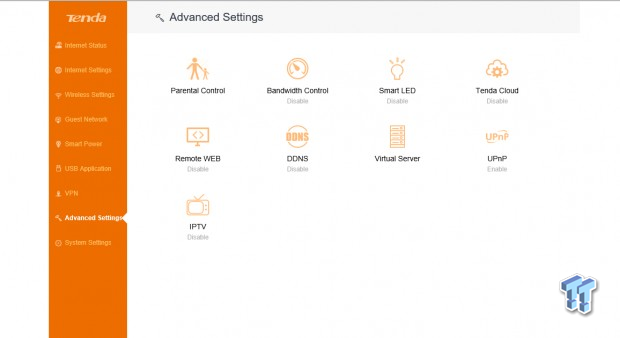 Advanced settings for the AC15 include parental controls, QoS and Tenda Cloud. 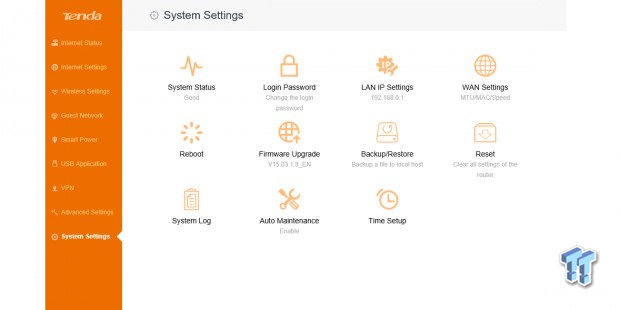 As the number of routers we have tested has grown quite a bit over the years, I now have enough devices in the database to split them into categories based on their capabilities. The Tenda AC15 being an AC1900 solution is compared below to solutions of the same capabilities. 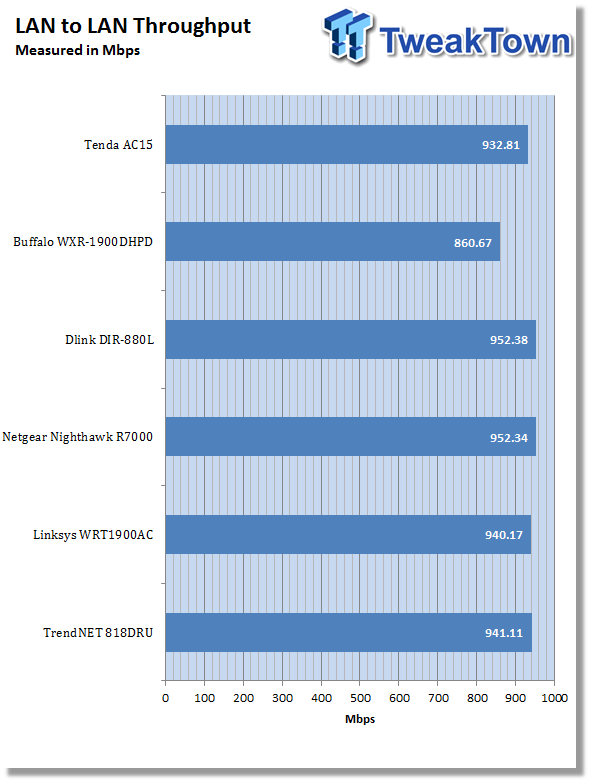 LAN to LAN throughput for the AC15 came in at 932 Mbps - solid performance when compared to the rest of the field. 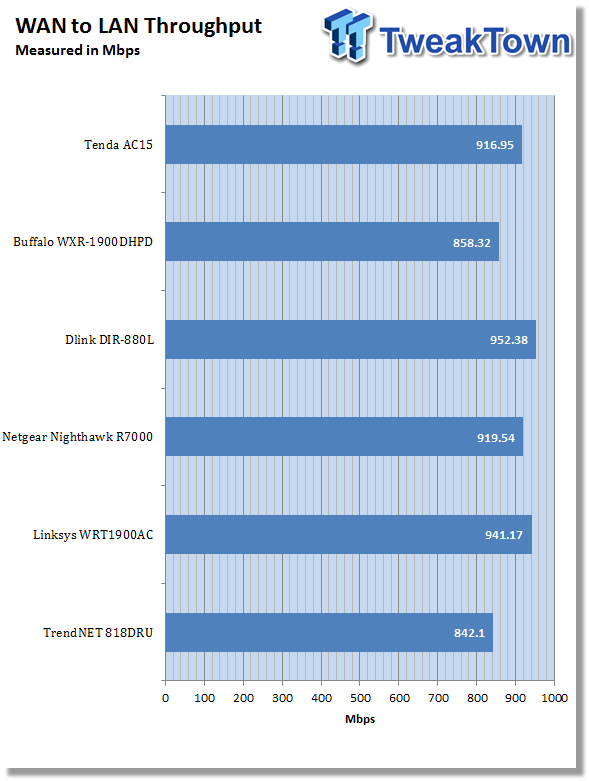 WAN to LAN for the Tenda came in at 916 Mbps, which is about average for AC1900 solutions. 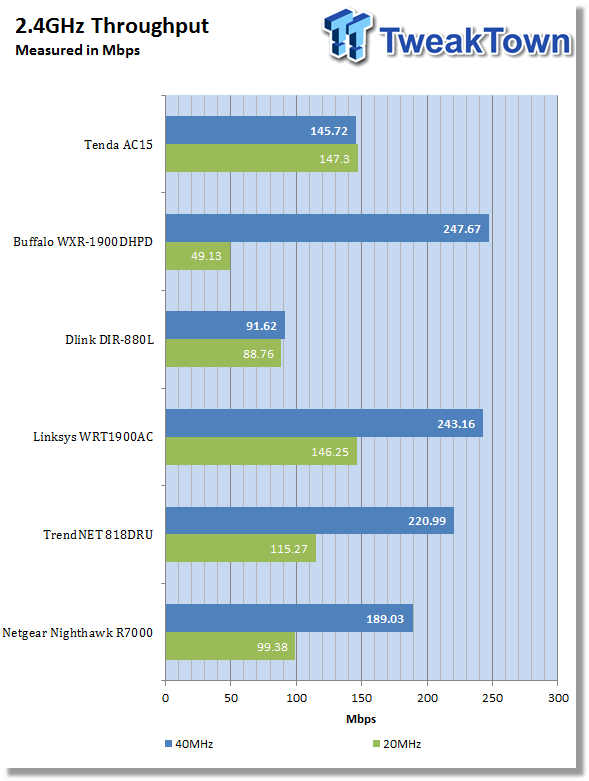 Starting off our wireless testing, we have the 2.4GHz band. The Tenda AC15 does not allow you to select manually between the 20 and 40MHz bands, so we were stuck with testing with the default connection. At this rate that locked on the 20MHz band, the Tenda brought in 145 Mbps of throughput that we have only seen from one solution previous to this, the WRT1900 from Linksys. 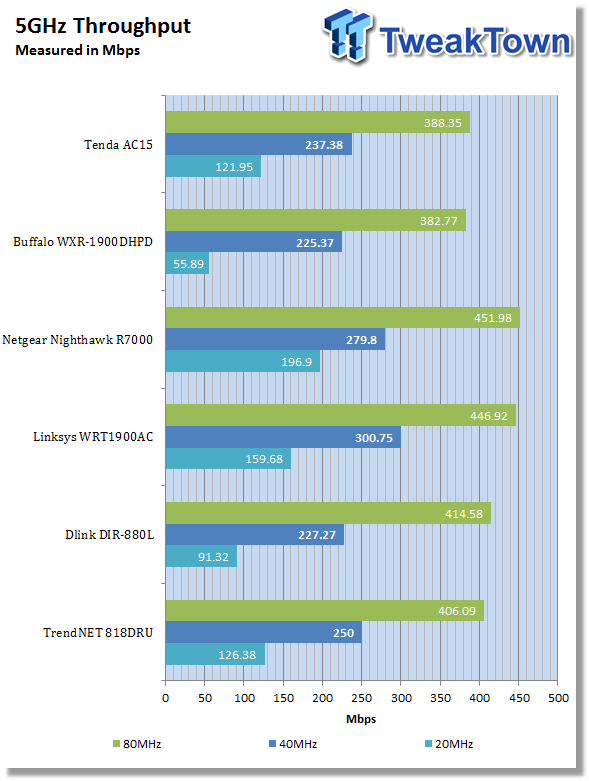 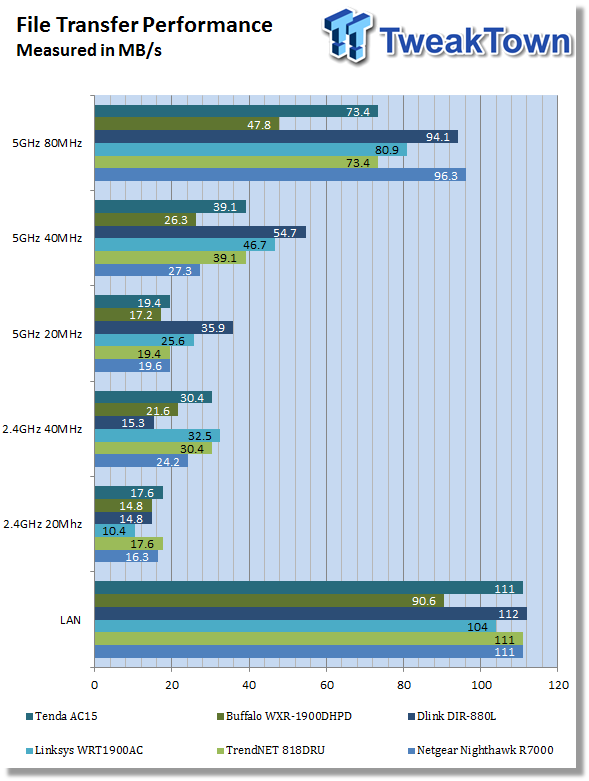 My first impression of the Tenda AC15, if I'm honest, wasn't very good. I'm typically not a fan of high gloss plastics just because they never stay that way. They tend to attract dust and dirt and scratches, and there is no way to stop it. With this being the first product I have tested from Tenda, I wasn't sure what to expect.

So after the last month plus of testing and going over the AC15, I can say that I'm happy with the device. It's not the best I have tested, but it does have good build quality. The aesthetics are going to depend on your own personal taste, for me it's not my cup of tea.

On the performance side of things, I was happy with how well the AC15 did. In our LAN to LAN testing, it was able to keep up with similar solutions reaching 932 Mbps while the WAN to LAN testing came in equally good at 916 Mbps. Switching our attention over to wireless throughput testing, we find the Tenda was able to reach a peak of 145 Mbps on the 2.4GHz band while 5GHz reached a peak of 388 Mbps. File transfer performance as we saw was on par with previously tested solutions coming in at 111 MB/s on LAN transfers. Wireless transfers peaked at 74 MB/s with 80MHz 5GHz band.

The user interface for those that find this to be an important feature is clean and straight forward. All the menu items are listed on the left of your screen making navigation simple. The number of options in the GUI go above and beyond my expectations and include things like VPN, IPTV, and QoS. Additionally, we have all the standard options allowing you to configure your wireless bands and passwords including guest networks, where I found my only issue with the router, guest networks do not work, at all even with the latest firmware.

With that said, if you are one that don't mind a glossy exterior and guest networks not working, something I hope Tenda can fix, this router is a solid entry into the 802.11ac market and a great way for AC wireless to become a standard in many homes.

The Bottom Line: With its strong price point, the Tenda AC15 is a solid entry-level solution for consumers that don't have the spare cash for high-end solutions.