It is funny to sit back and think about when we first looked at LED chassis kits. Back then, the best idea on the table was to take a couple of wires and a handful of three or five millimeter LEDs, solder it all together with a Molex adapter. And then to dress it up, cable sleeve got added, and LEDs poked out of holes in the braid. Things have sure come a long way.

Today, BitFenix is showing us just how far the world of LED strips that are pre-cut to length and come with all the wiring you need to get the job done all-in-one box have come. Many makers offered surface mount LED strips that you could tape into a chassis, inevitably with them falling a week later. It was, however, the next evolution, and while the tape kind of sucked, it was a great way to introduce a ton of light into a chassis with minimal power and mess.

So, how exactly do you better this idea? You satisfy customers that have had previous kits fall and offer a much better solution. This time around, the tape is gone, and replaced with the use of magnets, making these kits great for any steel chassis. Remember, it will not adhere to plastic, glass, or aluminum. Not only have they been added to the strips in a predictable location, they have even magnetized the power clip, hence cleaning things up again over previous offerings. 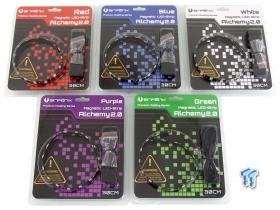 BitFenix sent the full assortment of color options at this time, and if we know them, it is likely more options will come as time goes on. For us to test and play around with for a bit, we were sent 30CM each of red, blue, white, purple, and green LED strips to show you. 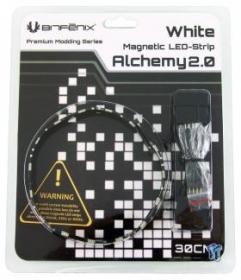 The packaging is attractive with the block design, and the text at the top is very clear and easy to tell what you are looking at below. We also want to point out the warning not to place these strips near DRAM, SSDs, or HDDs due to the magnets in these kits. 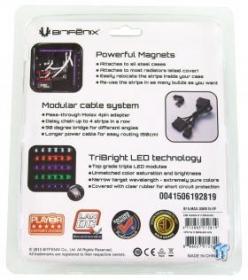 Flipping it over, we see that BitFenix covers the powerful magnets, and how this is advantageous. It covers the modular power system that allows up to four strips to power from one Molex, and it also dives into the TriBright triple LED modules used in these strips. 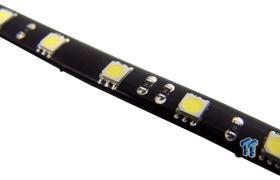 As we get much closer to the actual LED strip, we see a pattern of LEDs and resistors. One LED, one resistor, an LED, two resistors, and an LED, but the gap after is where the magnets are, and then the pattern will repeat through the length of each strip. 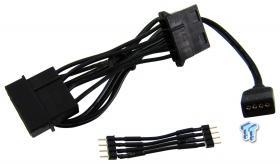 Along with each strip, they all come with this in-line Molex adapter so you can daisy-chain them if needed in the case, and at the other end is a plastic housing with four round pin holes. That is where the male 4-pin adapter at the bottom is plugged in. Also, as we mentioned, the end that the adapter wiring plugs into is also magnetic so that the wiring stays hidden, and will not put tension on the magnets in the strips.

Here we have gone ahead and wired this set of white LEDs up to be powered and tested. We have the Molex adapter plug wired in with the adapter right into the end of the LED strip. The other ends of the strip are identical and allows you just to use the adapter from strip to strip. 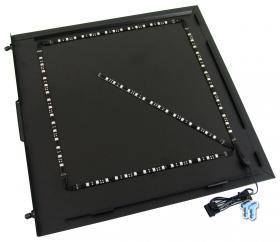 Breaking the four in one loop rule, we went ahead and wired all five of the 30CM strips to the inside of the Master Case 5 door panel as a backdrop. We experienced a series of solid clicks as the strips attached to the steel, and without effort involved, these strips will stay where you placed them for a long time to come. 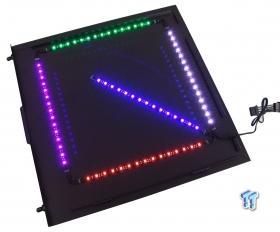 Once we powered them up, looking directly at them, just causes all sorts of glare with the intensity of these TriBright LEDs. Each color is as described and is easy to distinguish the white from the blue, and it from the purple. They are vivid and bright, and will add a ton of light anywhere you see the need.

Finding these kits is pretty easy to do, all you need to know is what length you need them in. We were provided all 30CM versions, you can also get this assortment of colors in 12CM and 60CM lengths as well. We played around with these a fair bit, bending them, attempting to round corners, and the magnets held strong on any steel chassis, anywhere we used them. They are flat enough to go under a motherboard, and not too wide that they cannot run next to drive bays or along the top out of sight hidden by the lip of the frame there. So, before you head off to buy some for your chassis, take the time to look at all the options. Get out the measuring tape, and mix and match sets to make the most out of your lighting ideas.

While we did break the rule of four with our testing, it wasn't powered all that long. In fact, it was just for a few images and powered back down. With more LEDs in the longer strips, we can see why the rule is in place. Without knowing the math, we won't advise that you add more together just because the kits are shorter in length. We do appreciate the craftsmanship in these kits and we know anyone with a steel chassis and the need for lighting will as well.

Pricing varies of course by length, but it also seems by color, if previous kits are an example of what to expect. We see the 12CM kits are in the $14 range, the 30CM versions are around $23, and for the 60CM version, expect to pay near $33. While you could go and buy a whole roll on eBay, you are stuck to a single color, need a controller if they are RGB, and also need to wire it all up nice and cleanly. For a bit of a cost, BitFenix does all the work for you and makes it very easy for anyone using a steel chassis to mount in tons of light. It is not permanent, so if needed to be moved or adjusted it can be, and all you have to do is pop open a plastic box and click them into place and enjoy.

The Bottom Line: BitFenix has answered the issue of tape on LEDs, and the Alchemy 2.0 Magnetic LED Strip is not only brighter than the old kits, it is a breeze to use inside of a steel chassis, but the price can get expensive.