Nano or Pico sized flash drives are becoming more common as performance and capacity have been able to be squeezed into the small form factor. Over the last year or so, many vendors have jumped into the arena with a Nano sized flash drive. Today we look at the latest from Strontium and the Nitro Plus Nano.

The Nitro Plus Nano is being described as the world's smallest and quickest USB flash drive. Available in 16, 32 and 64GB capacities, the Strontium Nano carries marketing performance upwards of 130 MB/s read and 100 MB/s write. The Nano sports a splash proof design with operating system support starting with Windows XP,7 and 8 while OS X 10.x and Linux Kernel 2.6 have been listed as well. MSRP of the Strontium Nitro Plus Nano in the 64GB capacity is listed at $29.99 with a five-year warranty. 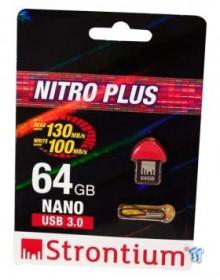 Packaging for the Nitro Plus Nano houses the drive to the right behind a clear plastic. Capacity is listed to the left with an indication of performance above. 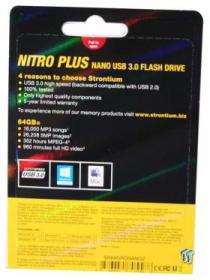 The back of the packaging features more details about the Nano flash solution, while a capacity chart tells you how much of any media will fit on the drive. 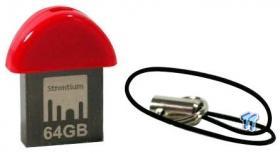 Finally, we have the drive itself. As you can see its about the size of a fingernail and comes with a small lanyard. Capacity is listed right on the metal of the Type-A USB 3.0 port. 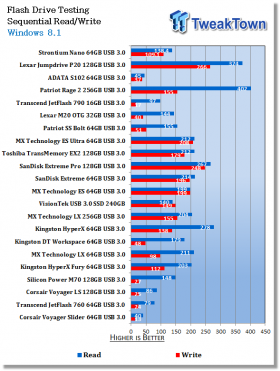 In testing, we found the performance of the Nano USB 3.0 to be right on par with marketing. Sequential read came in at 138 MB/s, while write numbers touched 109 MB/s. 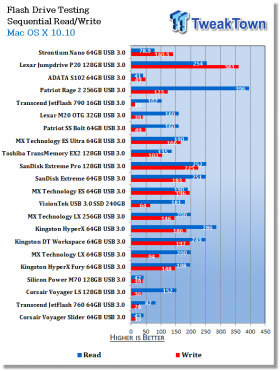 Flipping over to our MacBook Pro, performance slowed slightly with read performance touching 140 MB/s, but write only reaching 78 MB/s. 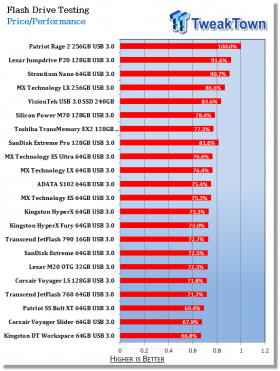 Last but certainly not least, we have the price/performance. In the chart above, the Strontium Nano made a home for itself at the third position thanks to both its performance and excellent price per GB near 46 cents.

When it comes to Pico or Nano sized flash drives, Strontium has done quite well with the Nitro Plus. As far as I can remember back, I don't recall ever having a flash drive in the lab in the Pico form factor that was able to go over 100 MB/s read or write, let alone to be capable of both. Build quality seems to be quite good, the plastics have a good feel to them, as does the USB 3.0 port.

Performance is the best I can remember having with a small form factor flash drive. In sequential read, we were able to reach near 140 MB/s with both Windows and OS X, while write performance at 109 MB/s was much quicker in Windows than OS X. Price/performance is yet another crown for the Strontium Nano, as it becomes the highest performing, lowest cost and smallest flash drive we have tested.

The Bottom Line: When it comes to small form factor flash drives, Strontium has a winner with the Nitro Plus Nano. It is the highest performing small form factor drive we have seen with the added bonus of also coming in at the lowest price.