As Marvel continue to move through the list of decades of comic book characters in an effort to expand what can only be described as a hugely successful Cinematic Universe, we're seeing unequivocal proof of just how strong the Marvel brand has become. Relying on little more than good casting and studio name recognition to sell their latest offering, an adaptation of Stan Lee's little-known character first introduced over 50 years ago Ant-Man comes with a few more hurdles to overcome, but conversely far less baggage and softer audience expectation. So, just how does it fare? Let's take a look. 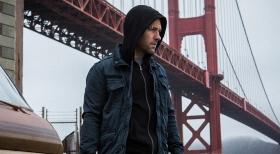 When down and out ex-thief Scott Lang (Paul Rudd) is lured back to crime in order to support his young daughter, he's given an extraordinary chance for redemption by scientist Hank Pym (Michael Douglas), to become 'Ant-Man', by way of a suit which shrinks the wearer to miniature size, whilst retaining the full strength and agility of a full size human. It's not a moment too soon either, as Pym's former colleague Darren Cross (Corey Stoll) has been developing his own shrinking suit technology, which he plans to sell to the evil Hydra organization. Along with Pym's daughter Hope (Evangeline Lilly) and Lang's literal partners in crime, Lang has to use his wits, his suit and an army of ants to save the day and by doing so, assist the Avengers in saving the world.

A much-needed departure from increasingly joyless Marvel features such as Winter Soldier and Age of Ultron, Ant-Man is perhaps the most accessible of the studio's films for quite some time, streamlined by the fact that it's happy to poke fun at its outlandish characteristics and subsequently doesn't take itself too seriously, but also because it comes relatively unencumbered from lofty expectations, which allows it to breathe a little easier. This is a comic book movie that's unapologetically made for the masses, and while that might upset some of the more, shall we say, 'grizzled' superhero fans, aiming it at a narrower audience would have been a totally uneconomical notion. 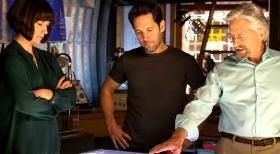 By this point, the Disney-owned Marvel Studios has become a finely tuned blockbuster sausage machine which consistently makes tonnes of money, but have allegedly become increasingly hostile to directors who have any kind of vision that doesn't fit within the Marvel mould. Even Joss Wheddon who directed the biggest Marvel film (and the fourth highest grossing film of all time) had his own battles with this summer's 'Age of Ultron', before publicly bowing out from future Marvel directorial duties. 'Ant-Man' has had the most difficult birth of any Marvel feature yet, with the acclaimed director of 'Hot Fuzz' and 'Shaun of the Dead' Edgar Wright developing the feature for nearly a decade before parting ways with the production just weeks before cameras were due to roll, citing "creative differences".

While we'll probably never see Wright's unadulterated vision for 'Ant-Man' (he's still gifted a story credit), replacement Peyton Reed has proved himself no slouch, producing a slick, breezy and highly enjoyable feature with equal parts exciting action sequences, laughs and a surprising amount of heart. Credit for this also goes to comedian Paul Rudd (he literally also receives a story credit), who plays Scott Lang with just the right balance of comedy, vulnerability and physicality. Best known for comedies such as Anchorman and I Love You, Man seems surprisingly at home transposed to a totally different genre and plays off his co-stars including Michael Douglas and Evangeline Lily well. Less effective is Corey Stoll as generic villain Darren Cross, who comes across as about as intimidating as my cat hiding behind a box. Marvel really need to work on their villains, because whilst they've hit gold with casting decisions for their heroes, their villains are acceptable at best, mediocre at worst. 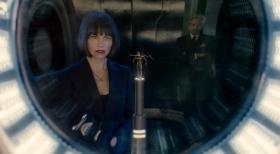 Sure, whilst there are some flaws and head scratching gaps in logic (why is it said that Ant-Man has the weight and strength of a fully grown man, yet can fly on an insect?) and it won't win any awards for fine filmmaking, it's undoubtedly a fun ride, which manages the trifecta of acting as an entertaining standalone superhero vehicle, evolving the Marvel Cinematic Universe and turning a relatively unknown (and unfortunately named) comic book hero into a bankable commodity in its own right. 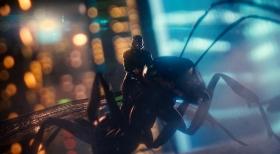 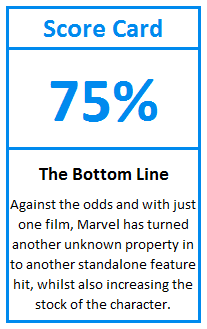